Singer-songwriter Ash Easton is a little bit country, a little bit rock ’n’ roll, and is ready to light the music scene on fire. Heavily inspired by southern rock, her songs and stage presence draw just as much on the swagger of powerful vocalists such as Janis Joplin, Chrissie Hynde, Joan Jett and Ann Wilson. Easton delves into her new record, reveals what it takes to make it as a woman in rock, and why she'll only use an Audix OM6 handheld vocal mic for live performances.

When did you first start singing?

As soon as I could talk, essentially. I had an older sister who was a professional gymnast and her work meant we had to do these drives to Los Angeles six days a week. I’d be in the back with my headphones and my giant boombox, singing at the top of my lungs and driving the rest of my family crazy! Also, I always put on little concerts for my family: if anyone would listen, I would sing.

Shortly after that I started taking voice lessons from a worship leader who taught voice on the side. I grew to love it so much, which my parents saw. At age 11, I started taking lessons from a professional voice coach. I stayed with her for 11 years. When I was in junior high and high school, we travelled internationally to do all sorts of things.

During that time, I was singing 20 hours a week, maybe more. My dad would always encourage me to pick up a guitar, and I did three years of piano lessons. But I only started gravitating to guitar when I was 21 and I wanted to write all these songs, and I needed to play to build the songs.

So, I started learning how to play and arrange in the key of G and started writing like crazy. I haven’t put the guitar down since! Then when I rebuilt my band during the pandemic, my guitar player and producer, Steven Crowle, arranged the songs to what they are now on the record.

A lot of my success has come from being assertive, because I believed I belong there.

Give us a little background about your work as HLLNDR?

I released an EP in January under that name. It was only five songs and a lot of fun. I had done some smaller-scale Gospel releases before that. There are also some YouTube videos of us playing the ‘Jam in the Van’ series sponsored by the company QSC. I just got some of their speakers, by the way. They’re a game-changer!

Anyone who has sung in lots of bars, clubs, and even churches has at some point encountered mics that weren’t in terrible shape. Was such a “mic nightmare” ever relevant to you carrying your own?

I don’t remember the name of the place, but there was this one time the house insisted I use their mic even though I had my own. I’m looking at this thing, and it’s dented all over, the grille was gunky with who knows what – just a mess. I start playing the gig, and the sound guy just leaves.

I’m noticing I can’t really get a signal out of the mic. I finally found this one spot on the side of the grille that I could sing into. Maybe it was the only place the openings in the grille weren’t blocked up. It was the weirdest thing.

From that point on, I have exclusively used my own mic. Another good reason is all the concern with germs since the pandemic. I also wear bright red lipstick onstage, which I don’t want to get all over someone else’s mic. I lead with that when I’m setting up at places: “Oh, I don’t want to get lipstick on yours.” But really it’s because mine sounds better! 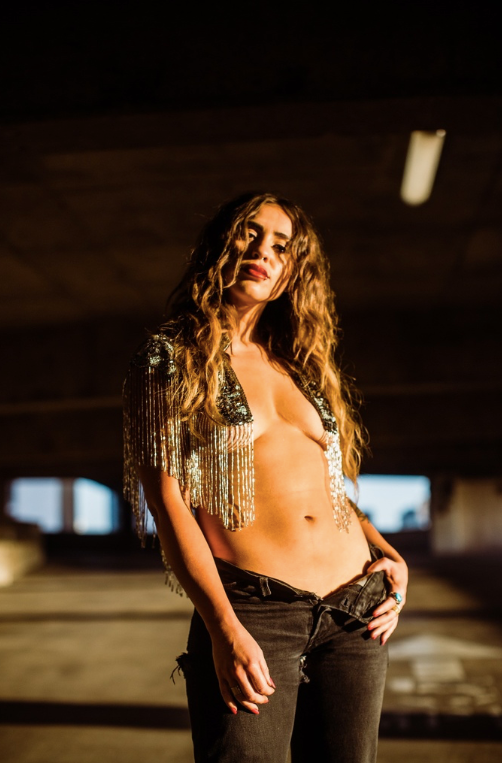 I’m not writing lines just so that they rhyme. I’m telling stories about real stuff.

Which Audix mic do you prefer?

It’s the OM6. It’s the only mic I’ll use now for live gigs. I first got turned on to Audix by Shane Hall. He’s a singer-songwriter and an Audix user. He had an extra that night and invited me to try it and let him know what I thought. I fell in love with it instantly.

The OM6 has a nice, tight, hypercardioid pattern, so it doesn’t pick up sounds that are coming from too far away from me or around me. It has been a dream for a lot of the smaller venues I play in. This is perfect in full-band situations.

Since we did Jam in the Van, I have a new drummer. He is so loud! There was one show where we were supposed to play more softly because the venue had got some noise complaints from neighbours.

I was like, “Bring your quiet sticks and a minimal kit”. He doesn’t really know how to do that, but I love that about him. And I’m always set up right in front of him. When we are playing hard, it would be a real issue with most other mics I’ve used. The OM6 works perfectly in that scenario.

The OM6 is the only mic I’ll use now for live gigs; I fell in love with it instantly.

Tell us a little about your new record, Rough & Tough.

I am so proud of everything about it! The title came from Shane Hall calling me “You little rough and tough” at one gig. That just stuck with me. I remember I went home super late, woke up early the next morning, and just wrote the title track.

It was one of those songs that comes out of you in five minutes, and it was just solid. It was very telling of the year of my life immediately previous, which included a divorce and lots of other challenges. It’s about how I had to learn to be “rough and tough” to overcome them.

The album is 10 songs and I’m doing a vinyl release. I’d say the influences on it include Chris Stapleton, Blackberry Smoke and Brandi Carlile. I’m a southern rock writer at heart, and I wrote all the songs on the record and arranged them with my producer Steven Crowle, who’s also my guitar player.

I think we made a dope-ass album! It will be streaming on every major platform. This record has been the most incredible labour of love: literal blood, sweat, and tears went into the entire thing.

My approach in the studio was to be entirely transparent. Every song written came from a very real place or experience. I’m not writing lines just so that they rhyme. I’m telling stories about where I’ve been as a person and real stuff I’ve gone through.

My hope in the process of writing, arranging, and then recording these songs was to create connection, which was the thing I really missed during the pandemic.

The silver lining to that was that it gave me time to write about real things and to become more honest with myself in hopes of creating a space where I can have that connection in a bigger way.

So, this record tells the story of my life over the last two years, but also the story of where I’m going. My biggest hope for it is that it makes women, and especially creative women, feel brave, strong, and, well, ROUGH & TOUGH!

This record has been the most incredible labour of love: literal blood, sweat, and tears went into the entire thing.

Where do you stand on the controversy around music streaming companies paying such slim royalties to artists?

Well, it’s true. But I went into it knowing what I was getting into. Selling a piece of music on physical media is wonderful and a lot more profitable per track, but at the end of the day it’s essentially a business card.

Streaming is important because your music becomes accessible beyond what you’re able to give out physically, unless of course you’re signed to a major label who’s putting huge distribution and marketing muscle behind you. So, yes, you don’t really get paid from streaming, but it makes your reach a lot longer than it could ever be otherwise.

Do you find that reach helps you build live audiences who then pay for shows and buy merch?

Absolutely, and it helps you get the gigs in the first place. When I went on tour last year, I didn’t have any material from this new record because it wasn’t arranged yet and we hadn’t been in the studio. But I still wanted to tour.

I had some acoustic versions of some of the songs on YouTube, and just being able to have those there to send links to different venues I wanted to book, that was very helpful. I also sent them a Spotify playlist from my previous project HLLNDR, which got my foot in the door. If you’re all set up with major streaming services, bookers take you more seriously.

It’s insanely important. Especially nowadays, having video content across multiple social media platforms is critical. It helps to build your fanbase in a different way than playing live shows does.

I love playing live and being an entertainer. But that’s only one way to build. So, I’d encourage anyone to really step up their game when it comes to video and social media. 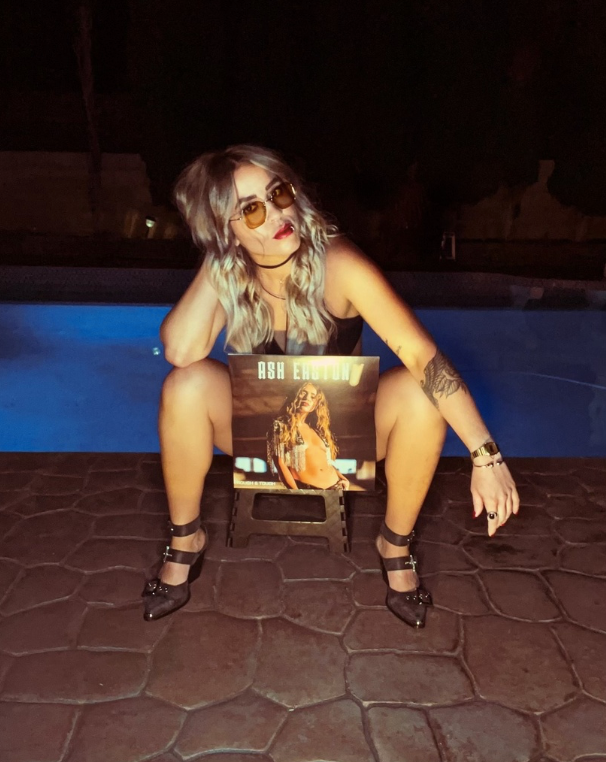 Sometimes women feel like we have to be timid in our approach to things, and that doesn’t work well.

What were your favourite bands when you were a child?

I grew up listening to ‘50s and ’60s music. I remember being in the back of our Chevy Suburban when I was young, listening to everything from Aretha Franklin to The Temptations to Selena.

When I got a little older and started to form my own actual opinions about music, I loved AC/DC, which I had an introduction to because my dad is Australian.

I remember getting Back in Black and just playing it nonstop. Then, being introduced to powerful women singers, whether it was Janis Joplin or Joan Jett. All of that really helped me see that rock ’n’ roll has no gender. We all get to participate and be a bunch of bad-asses.

What advice would you give to young women who want to rock out?

Get some thick skin! Rock may have no gender but the scene around it is certainly male-dominated, and it just is what it is. I think sometimes women feel like we have to be timid in our approach to things, and that doesn’t work well.

I believe that a lot of my success has come from being assertive and stepping to the carpet because I believed I belong there. I don’t have a timid bone in my body and it shows in how I perform and how I represent myself.

There are a lot of wonderful women coming up that are creating space and kicking down doors for other women to be able to do the same thing. So, my advice would be to be brave, be everything that you are, and to not stop at anything when you’re running towards your goals.