Ryan Koriya is a producer, singer, and songwriter from Zimbabwe. He cut his gigging teeth in the UK, spending his first summer performing at the 2003 Edinburgh Fringe before going back to London where he had just moved to. Now, as an international artist, music industry consultant, and label owner, he mainly draws inspiration from his acoustic guitar - but is not shy to layer his songs with ethereal synthesisers and heart-pumping beats.

Hey Ryan. Could you give us a quick overview of your musical vision?
Sure. For me, music is a universal language, and my vision is in similar tow. My goal is to become a globally successful recording and performing artist, whose voice and sound have a home across different genres and different cultures worldwide. Music is the borderless healing agent keeping the world alight.

What inspired you to make your first EP, Mirrors Don’t Work In The Dark?
I was living in an abandoned hospital building right in the heart of London, near Oxford Street, where I even recorded in a former surgery with the x-ray light as my night light. What a dark, yet magical time it was for me. I had left my day job in Richmond, West London in order to take my music career head-on. I started busking on the tube, and on the South Bank. After one summer’s evening of busking, I saw a well-dressed lady wandering alone amongst the crowd, bawling her eyes out. I approached her, and helped calm her down; I played her a song or two, got her lots of napkins from the nearby Pizza Express, and walked her to her train home. The song Ballrooms In The Sky is the story of that night. So the EP is like a sonic hug, and lyrical cup of tea, to comfort people on those dark days, which I’ve lived through myself. It’s the quintessential commuter’s album.

What are your favourite bits of audio kit?
I use the Focusrite Scarlett 2i4 interface, which goes everywhere with me. I love the crimson colour, too. It’s very me! My mic is the versatile Rode NT2A condenser that my voice sounds great going through. I’ve had it for at least 11 years! I also use it to capture all my organic sounds: acoustic guitars, and even djembe. It delivers every time. And since I’m always on the road, and record on the move, I have a sturdy pair of KRK KNS 8400 headphones that I do my mixing on before gaining access to open speakers. I’ve had them since 2015, and they work hard!

Any favourite plugins?
Absolutely! I use the incredible new Hans Zimmer Strings from Spitfire Audio, sampled at London’s Air Studios. A whopping 344 strings players living on my hard drive, bows ready at my command! As a soundtrack composer and strings player myself, I’ve been lusting for something as realistic as this for a while. It’s just brought my strings sound to another level. You can hear real-life artefacts, and the variety of playing techniques they have captured is going to make people think I recorded the session live. I also use Addictive Drums by XLN Audio, which packs a punch: organic drum kits that I can chop and change with impressive adaptability and control. This means I get to travel with a string orchestra, and multiple drum kits to record with! I record using Cubase, like Hans Zimmer does. I remember busking until I lost my voice, then going straight to buy my first Cubase package in a music shop called Sound Control on Tottenham Court Road. I had four of the staff members counting out hundreds of pounds in coins… what a sight! [laughs] 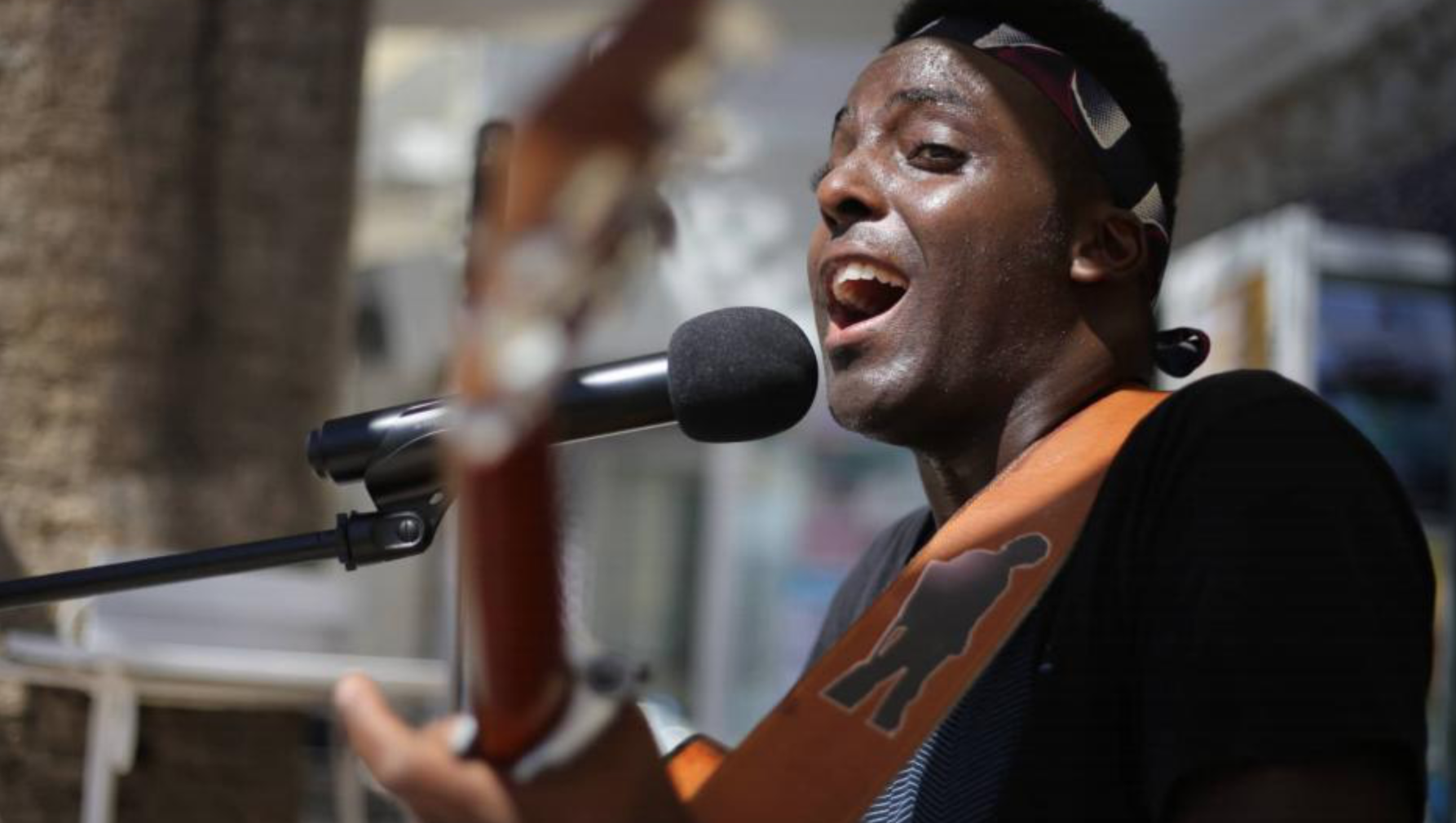 I use the incredible Hans Zimmer Strings by Spitfire Audio - 344 strings players, living on my hard drive, bows ready at my command!

Take us throught your live setup...
[smiles] When busking, I use my Street Cube amp by Roland. It has two channels with effects, and along with my Shure WH20XLR head mic, it sounds so good that people often ask if I’m lip syncing to a recording! Well done Roland and Shure! I’ve had the Cube since 2007, and it’s still going strong today, and has gone all around the world with me! Performing live is my biggest focus, so I’ve put a lot of hours into developing a unique show. It works so well that I get hired to play band gigs on my own, and even do six-month-long residencies in the same venue in Denmark, where they’d usually rotate the artist for variety. Plus, I play five-hour shows there. I’ve never actually divulged the secret sauce, but this is basically the magic combo:

I play my guitar in the key of D all the time, to suit my voice. My guitar, a Yamaha FG800, has never been in E since the day I bought it in Nashville! I use the infamous kick drum stomp box (Little Monster, made by Wild Dog Australia), along with a second snare stomp box (an appropriated hockey puck), also Australian made; and thirdly, I have a simple floor tambourine. This gives me a kick, snare, and hi-hat combo, all played live using my feet. They are small, and hardly noticeable, visually, so people often assume I have a drum machine going!

I enjoy doing this live vocal delay thing, by actually singing the echo, and using mic proximity, which fans certainly find quite novel to watch live. In the spirit of making the show about the audience, I also don’t have a set list; instead, I feel my way from song to song, depending on the room’s vibe. Then finally, I pride myself in being very engaging with my audience, so much so that by the end of the show, I often end up knowing where nearly everyone in the room is from, or maybe what they do. People end up staying longer than they intended, and come back a second or third day in a row. At live shows, people also want to connect, and have a good time, as opposed to just being sung at.

Will we see these cool concepts incorporated into your second EP?
2019 will see me release more music than I have ever done before, as I’m now starting my own record label, and I will be releasing multiple projects across various genres. It’s going to be an exciting natural next phase in my development.

And finally, how does Ibiza inspire you to create?
It actually feels a lot like Zimbabwe, which is partly why I chose to base myself here for now. You can feel this place was once a part of Africa that broke off the continent. It’s a very spiritual island, and I’ll actually be doing some recording at Sonic Vista Studios, which has the perfect artist vibe for being creative. Surprising to some, I also chose Ibiza as a Zen place for me to unplug from touring madness!