Dream-pop duo Drinker, which joins singer/songwriter Aaron Mendelsohn and composer/producer Ariel Loh, are proof that long distance relationships can work. Having met and formed a writing partnership together while both living in New York, Aaron recently moved to the opposite coast in Los Angeles. Regardless, Drinker lives on.

“We’re kind of a recording duo”, Aaron explains, sensing my confusion as to how a band can possibly function with 2,789.4 miles separating its two core members. “I’ve put together a live band out here (in LA), but the recording aspect is still something Ariel and I are continuing with — he’ll be coming here in May, and I’ll be heading back in June so we can continue making these songs.”

In fact, Ariel has set up a backing band for them in New York also — as long as Aaron is present to sing the songs and play guitar, the show will go on, whether it’s on the east or west coast. It’s all very 2017.

“It started out as just Ariel recording my songs,” Aaron says, sensing I’m still incredibly confused by it all. “But then our work took on another level of collaboration. I think the combination of our input gets it to a certain place that we need each other for.” So how did all this come about? “Well, Ariel and I knew each other for a few years prior, through former bands who used to play shows together in New York. I noticed Ariel was doing a lot of good production work, so he always seemed to be the person to go to for when I started writing my own songs again.”

“One weekend we drove out to a family home Aaron has outside of New York,” Ariel says. “We took some equipment and set up shop for a few days and that was the first time we ever wrote or did recording together. The first track we did ended up being the first song on our EP.”

Despite only forming in September, Drinker have been keeping busy. As mentioned, they put together an EP, Which Way Is South, which dropped on April 27th. Using their unorthodox methods for performing with or without each other, they’ve already played some shows, one of which was through Sofar Sounds in New York.

The things they say are seriously backed up by the music — Aaron’s voice and his songwriting contribution is very strong, and Ariel’s production is pretty formidable. It’s almost Bon Iver meets The xx, with Aaron’s voice sounding a little like José González. There’s small elements of that kind of folk, pleasingly swallowed up in processed beats, analogue bass lines and electric guitar. Lead single, Which Way Is South, is sure to turn heads at the end of this month.

Ariel recently completed his first film score, which explains the cinematic quality to the duo’s music.

“I believe the movie came out in the UK just recently,” he says. “It’s a horror film called The Eyes Of My Mother. We’ve actually borrowed some of the sounds and eeriness from the film music world for this project. I’ve worked with quite a few artists, but Drinker was the project where it felt like a real collaboration and not just me producing it.” 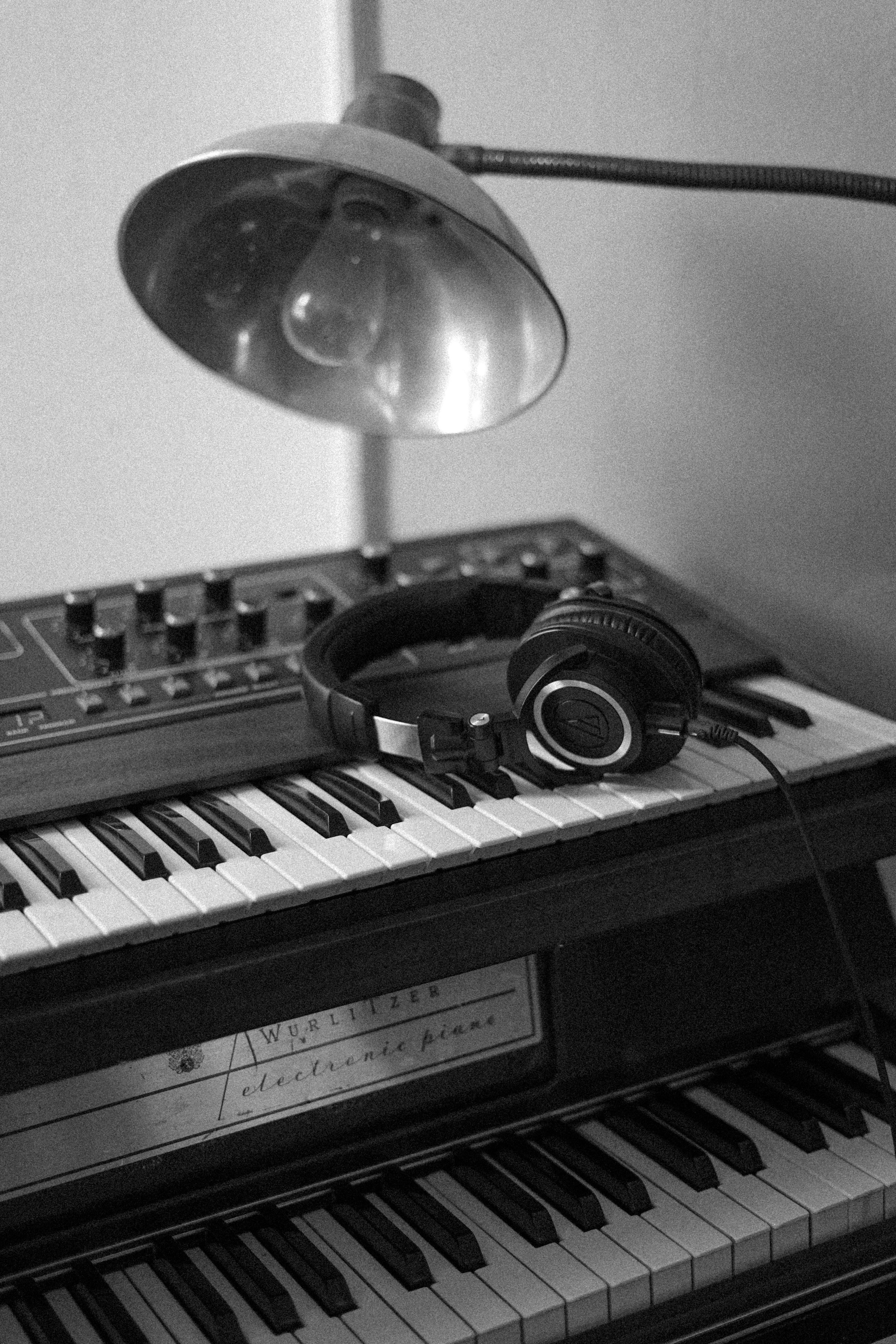 We recorded all of the Drinker songs using the [Audio-Technica] ATH-M50x.

It’s no surprise to me that both the guys are pleased that their music reminded me of The xx.

“Yeah, we definitely reference them in Which Way Is South,” Aaron says. “And I really love Jamie xx’s production”, Ariel adds. “The colours he’s able to get are really pleasing to me. There’s definitely some influence from that area.”

“We’re also fans of a singer/songwriter called Douglas Dare”, Aaron says. I’m impressed to hear that Douglas Dare and the sounds of his London label Erased Tapes Records are reaching the Big Apple. “I found him at the Rough Trade record store in Brooklyn, he was on one of the listening stations so I checked it out. We both really enjoy the drum vibe on his record and the production quality in general.” “Yeah, and I was really pleased to then discover all the composers on the Erased Tapes label through Douglas,” Ariel says.

Being intrigued by their sound, and knowing Ariel is both a composer and producer, I’m keen to know about the gear and setup Drinker are working with.

“I use the Carbon Copy analogue delay pedal, that’s my favourite,” Aaron tells me, regarding his guitar sound. “We also played with my old room mate’s Fender Twin, which is a bold and beautiful tube amp from the late '60s.”

Ariel kindly turns his webcam around to treat me to a view of his studio set up in his New York apartment.

“The speakers I use are these Bowers & Wilkins,” he says. “I really enjoy them as studio monitors, I’ve been using them for a while now. I also have some Yamaha HS10s, which are very commonly found. The audio interface I’m currently using is the Universal Audio Apollo — I have one of the 16-channel ones as well as the portable twin ones. I enjoy it a lot because of the plugins Universal offers.

“Then a lot of the synth sounds on the record are from my Prophet 5, which is an older one from the 80s. It’s one of my favourite synths and me and Aaron use it extensively. I’ve also got a Roland Tape Echo machine which I use liberally in Drinker — with the synthesizers it really gives it that next level of eery, space quality. It has a reverb as well as the tape so it’s great for big delay swells, and automating the delay times, to get drops and a rise in pitch. My stable microphone is from a brand called Violet - their kit is all made out in Latvia.”

Ariel admits he's pretty picky about his headphones. Having used the same pair [of AKG K240s] for the past 10 years as his only mixing headphones, he found he needed something that would also be suited to tracking:

“I never really liked the Sony offerings as they sounded a little thin, and the Sennheisers sound a bit boxy to me, so when I discovered the Audio-Technica ATH-M50 series, I felt like I immediately found the pair of headphones that I'd been looking for," Ariel says. "And it turns out they are great mixing headphones as well as all-round listening headphones: the sound is full with great low end and a smooth and accurate response through the frequency spectrum; and the fact they come with different cable lengths for the headphones, and that they are detachable, is a also a big bonus. We recorded all of the Drinker songs using the ATH-M50x, and when I fly to LA to work with Aaron, I bring them along to use on the plane.”

Make sure you check out Drinker’s latest single, Fake It, which you can LISTEN TO HERE. Their deft combination of film score spaciousness, contemporary songwriting and enticing production work should ensure Drinker will be a name to watch out for. And next time you feel sad because a close friend or partner is moving to another city, bear these two in mind.