Lu Wright's British Daisy Is The Soundtrack To Your Summer

Newcomer Lu Wright is used to putting on a brave face, however with her debut single release, British Daisy and upcoming EP, she’s letting her guard down. It might just be the soundtrack to your summer.

Lu Wright and I begin our conversation the British way: talking about the weather.

“We’ve got some clouds, and we had some sun earlier which was nice, but it’s not raining, so I can't complain,” she laughs.

Well spoken and immediately friendly and relatable on the phone (she’s just finished binge watching It’s A Sin and is about to start Call My Agent! On Netflix), Wright is here to talk about her dreamy debut, British Daisy – the first track taken from her upcoming debut EP release, Notes To Self.

An irresistible mix of Jessie Ware, Lily Allen and with a pinch of early Amy Winehouse thrown in for good measure, the song is all breezy vocals, jazzy muted trumpets and slinky electric guitars, and it might have arrived at just the right moment.

With the hopeful promise of warm spring and summer evenings spent with friends and family ahead (perhaps a G&T in hand?), what better music to ease the UK out of its lockdown slump?

“It’s funny you should say about immediately talking about the weather, because British Daisy stems from the typically British trait of putting on a brave face, instead of saying what we mean and acknowledging the fact that we are all fragile,” Wright points out.

After being in an unhealthy relationship in which she found her self-worth slowly eroding, this song talks through the fight to break out of an unhappy relationship, and the bad habits they can leave people with.

“British Daisy speaks of a time where I found myself daydreaming of a life where I was happier, but didn’t have the strength to make it happen,” she shares. “I was unsatisfied with most things that were going on and was feeling pretty insecure, and not feeling like I could talk to that person about how I felt. I was putting on a brave face, which Brits are very good at doing.

“I think once you've had a few shocker relationships, they do affect you after a while – from my experience. They can leave bad habits and bad memories, which can affect your future relationships. That’s why I sing, ‘you’re ruining my summer, you're ruining my future lovers’, because it did affect how I felt towards other people coming into my life. I don't think it's too much to ask to be content in a relationship, and I just wasn't getting that.”

So that’s the stiff upper lip covered; what about the daisies?

“We were finishing this up in the summer 2020, and my parents’ house has loads of daisies in the garden,” she answers. “I remember writing the lyrics and just looking at these daisies, and just thinking, ‘they're quite lovely’.

"Fundamentally, the song is saying, ‘we've all had these really bad times in relationships, and you don't need to put on a brave face’. We all do suffer, and you should talk about how you feel – it does get better.” 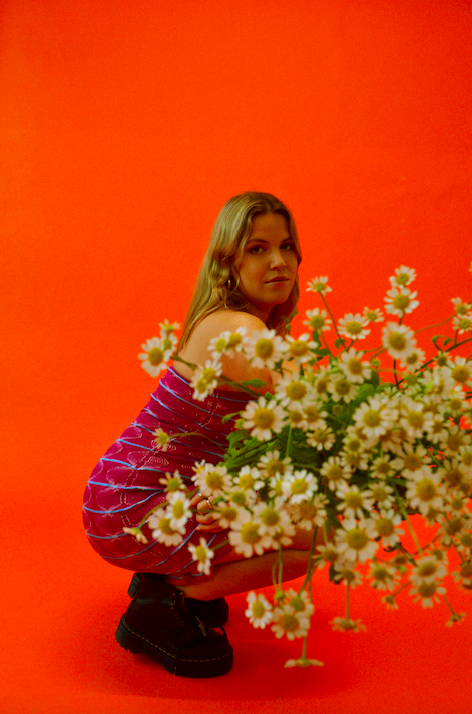 British Daisy speaks of a time where I found myself daydreaming of a life where I was happier, but didn’t have the strength to make it happen.

“I said to Jacob that I really wanted to create an EP with tracks which are all interlinked and with similar themes throughout. British Daisy was one that we started on in 2019, and then we came back to it in the summer of 2020, which is when we finished most of the EP. It's quite summery, bright, colourful and upbeat; I definitely am a summer kind of girl.”

Wright's soul and R&B influences stem from her growing up in a home filled with music, listening to everything from the classic soul and jazz maestros of the ‘50s and ‘60s like Nina Simone and Sam Cooke, through to noughties R&B and hip hop outfits like Outkast, Eminem, Rihanna and Amy Winehouse.

Since then, her contemporary influences have aligned with the times, citing Little Simz, Anderson Paak, Maverick Sabre and the Blue Note Re:imagined album as huge sources of inspiration. She adds that Jazmine Sullivan’s new Heaux Tales is “a work of art”, and that she’s watched her Tiny Desk performance more times than she can count...

“Nina Simone influenced me loads when I was younger; I had her CD in my car – well, I was in the car – it wasn’t my car,” she laughs. “I listened to it on repeat, and Sam Cooke influenced me massively. People who are activists themselves and have these incredible jazzy, soulful voices – I was really drawn to them.”

This is where her love for songwriting and melody truly began. Wright began writing her own songs at the age of 11, joining the school choir and taking up singing lessons before progressing into musical theatre, but at 19 realised that it wasn't quite the right fit and subsequently made the switch to creating and performing contemporary music. She went on to graduate from the London branch of the BIMM Institute (British and Irish Modern Music Institute), and then set to work on her debut EP.

The 2020 pandemic hit just before it was completed and live dates were cancelled, but Wright used that time productively to complete the finishing touches remotely and concentrate on her songwriting. The result promises to be a collection of musically detailed, immaculately produced treats.

“It’s a weird world,” she says of her songwriting. “I am inspired a lot by the people around me, what they go through, what happens in the world, my own relationships, memories and feelings. I'm a very visual person, so a lot of the time my music and my songwriting process has started with a visual idea, a colour, or a thought of something. British Daisy is very colourful and is very visual – I talk about space a lot, and about flying and being free as a bird.”

Although it’s not always this poetic:

“Sometimes an idea will start with weird voice notes when I’m walking to the Post Office, and all you can hear is buses in the background,” she laughs.

“It is different every single time. People ask me how they can get better at songwriting, and I'm like, ‘I actually have no idea, I'm still trying to figure it out!’ You have to just do it. It could be rubbish, but just go for it and see what happens.”