SOFI TUKKER Bids R.I.P To Shame With Dancing On The People E.P

R.I.P Shame. What? That was exactly Headliner’s thoughts when learning that this was the name of Grammy-nominated duo, SOFI TUKKER’s, upcoming world tour. Turns out it’s not an obscure, belated protest to Cersei’s walk of atonement, (in fact, one half of the band has never even seen Game of Thrones – Shame! Shame!), but the desire to kill shame, one dance party at a time. Still not following? Headliner chats to SOFI TUKKER ahead of their DANCING ON THE PEOPLE E.P release, and all becomes clear. Kind of.

Attempting to summarise SOFI TUKKER’s sound is tricky. Veering more in the direction of electronic / dance music, the quirky American duo seem to be genre (and Caps Lock)-defying: Influenced by Kundalini yoga chants, Portuguese poet, Chacal, and West African dance and drumming, (all the while urging fans to “let their freak flags fly,") the likeable pair have an infectious vibration all of their own.

Speaking to them on the phone in L.A early in the morning, Sophie Hawley-Weld and Tucker Halpern have just woken up, although their back and forth banter is still sharp. Headliner attempts to get them to describe their sound, and is promptly called out on it.

“I see what you’re doing – you can’t describe it so you’re asking us to describe it!” Halpern laughs.

Hawley-Weld comes to my rescue: “He’s not shy! It’s definitely hard to describe our sound…we try not to, even for our sake. We don’t want to pigeonhole ourselves when we’re creating music, so we’re not defined by anything. It’s kind of dance music, but that’s as specific as I can get – it can be upbeat, mellow, super goofy, or thoughtful. We hope people feel better after listening to us than they did before.”

Halpern offers: “One song might be a poem to a trance vibe, and sometimes it’s a full on structural song. Genre-wise it’s more dance, if you try to name it – but it’s more about feeling-wise.”

“Exactly,” agrees Hawley-Weld. “It’s really organic. What we really want to write about is: how do we want to speak to ourselves? So we write in that way. I hope that rubs off on other people who hear that. It’s important to me that the words are honest and not empowering in a cliche way, but more how I am processing the world…” she trails off, losing her train of though. “I need some tea!”

Halpern tells Hawley-Weld to wake up: “I was looking for smelling salts!” he laughs.

Meeting at college (that’s uni for our U.K readers) when the then-strangers were at Brown university, a chance meeting saw their two artistic mindsets collide – and the rest is history: Their debut single, Drinkee was nominated for a Best Dance Recording Grammy, which was followed by a Best Dance/Electronic Album Grammy nomination for their debut album, Treehouse.

Despite being ludicrously popular (especially in Portugese-speaking countries – more on that later), they just might be the most popular dance music duo you’ve never heard of…yet.

SOFI TUKKER's records have achieved Gold or Platinum status on every continent other than Antarctica. Their electric and energetic live shows have sold out venues and graced major festival stages across the planet, not to mention performances on The Tonight Show, Italy’s X-Factor, Sunday Brunch in the UK, the Late Show in Russia and BuzzRhythm in Japan. Their appeal is global, boosting significantly when Apple came calling, using their infectious song, Best Friend, to launch the iPhone X.

The song was played during the iPhone X full commercial reveal at the Apple event in September 2017, features in the football game, FIFA 18, and those listening closely will hear it playing in the club scene in 2018 movie, Ocean's Eight. Not to mention the song has been streamed more than 70 million times on Spotify.

“That was a shock,” admits Halpern. “Apple is so secretive, we didn’t even know what the ad was going to be, or if it would be a big, important add or not. When we found out it was the focus of the whole release for the iPhone X, we were pretty shook! That was crazy. We had no idea how it might affect our careers – it didn’t happen overnight, but I think over the next year, we really realised how massive the campaign was, and how much influence they have – even if you’re just tagged along with it. It was definitely huge for us as independent artists in the U.S. Without a huge label machine behind us, I think it was pretty incredible because it got our music to so many more people than we could have done otherwise.” 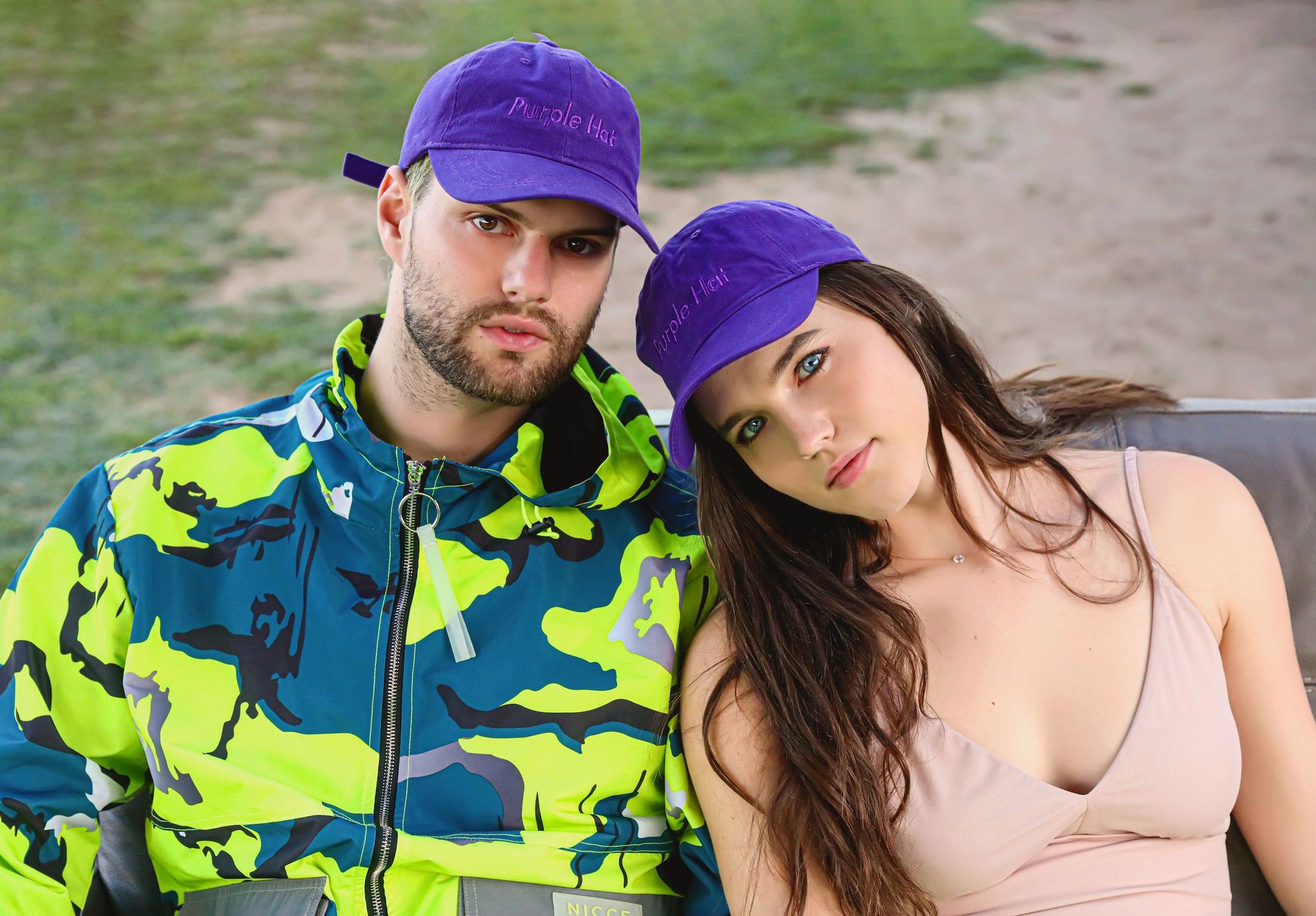 There’s a lot of hate and a lot of judging, and we just want everyone to be however fucking weird they want to be! SOFI TUKKER

Singing in Portuguese on many tracks, Hawley-Weld doesn’t officially speak the language: “I lived in Brazil during collage,” she explains. “Brazil is a country I feel most inspired by, and that’s the kind of Portuguese I speak. The reception from Brazilians has been just incredible. We’ve played three shows there and all of them have been insane. It's cool because when we go there, people can actually sing the lyrics back, whereas in a lot of places people kind of mouth them [laughs]. Brazilians have really taken us in and it means a lot to us. We feel at home there.”

Launching their new E.P, DANCING ON THE PEOPLE on September 20th, the six-track E.P includes already released tracks: Fantasy, Playa Grande with Colombian duo, Bomba Estéreo and the latest offering (and crowd favourite), Swing, as well as three brand new productions. Why ‘dancing on the people’?

"When you’re dancing in the club, and it’s so packed you completely lose yourself in it and don’t even know where you end and the next person begins, ‘coz you’re all one vibration, that’s when you’re dancing on the people,” they answer. “It’s a feeling of complete lack of inhibition and complete connection. It’s the feeling we get at our parties and it’s the best feeling in the world!"

The duo are celebrated for their inclusive and global perspective on electronic music, their work fusing themes of liberation, unity and self-empowerment. What can fans expect from their new tracks?

“Similarly to all our music, the message depends on the song,” says Hawley-Weld. “The theme that weaves itself through the whole E.P is it’s us, and it’s what we’ve been experiencing and how we're working through things. We have the song Purple Hat [inspired by Halpern wearing a purple hat one day, naturally], then more mellow tracks – we kind of have the whole spectrum of expression. On the new E.P we have been inspired to make a lot of different kinds of music, so there are a lot of left turns and things we haven’t tried before, ranging from a kind of dance ballad, to an emotional, nostalgic early 2000s kind of vibe.”

Headliner immediately feels old - surely we can only officially feel nostalgic when thinking about the 1990s or earlier? But we digress.

On the music production side, Halpern is heavily involved: “I’m using Ableton now, and this is what I started using when we began to take the band seriously. It’s a lot easier because our live stuff is playing out of Ableton as well, and I like the workflow of it. We use a lot of outboard stuff, too. My favourite thing is the Roland TR-8S drum machine – I love having the real hardware. We used to do everything in the box, and I really got into external hardware. Sophie writes the lyrics, the melody and plays guitar, and I’m at the computer producing and making the basslines. We work with other writers too, but it’s all really us!”

SOFI TUKKER will embark on their R.I.P Shame World Tour soon, starting in Canada, then North America, and then onto Europe. We have to ask: why the name?

“We really like that phrase, and we were taking about making a shirt out of it yesterday because we love it so much, but basically we want to kill shame one dance party at a time,” answers Hawley-Weld.

Halpern interjects: “I think the less dramatic way of saying it is basically, we want everybody to feel loose and that they can be themselves – and not self conscious. That’s a strange feeling, and I don’t want people to feel that way every day, so if they can come to our show and even for a few hours feel like that, I think that’s a special thing. I don’t think that’s promoted all the time – there’s a lot of hate and a lot of judging, and we just want everyone to be however fucking weird they want to be.”

So it’s not in protest of Cersei’s walk of atonement? (Although she had it coming).

“Yeah, she is the worst!” laughs Halpern. ”Sophie is looking at me like, ‘whaaaat?’ [He’ll explain Game of Thrones to her later]. It was basically like the walk of shame home in the morning after…[saved by the phone as the line momentarily breaks up]…this is how it feels anyway!”

Don’t let the duo’s playful sounds, videos and (fabulous) clothes and hairdos distract you, they are very serious about what they do, and about what they believe in: SOFI TUKKER are passionate activists who have raised funds and awareness for Planned Parenthood, The Trevor Project, the March for Our Lives and Plus1.

“Those things are really important to us, and the fact we have this opportunity with our shows to reach so many communities around the world and communicate with so may people, it makes us really excited to be able to talk about, share and support the causes that matter to us,” says Hawley-Weld. “It’s amazing to play in a place and hopefully have people come to a show and feel loose, crazy, confident and themselves. We want to leave things better than before we came.”

With the new E.P launch imminent and a tour to prepare for, the duo are currently finishing their album and are writing every day, although that’s not always as easy as it sounds, admits Halpern.

“Doing the last 20% of songs is the hardest part and the least fun – the fun part is the creation and the excitement of the idea, and then you have to do the little things.”

“Although I think it’s more fun than it’s ever been, I just have to say that,” Hawley-Weld interjects. “It’s not always not fun!"

“It’s the most fun thing ever to make music, it’s just that small percentage,” Halpern clarifies. “But you get in your own head when you hear something a thousand times. We’re doing a music video for our new song, Purple Hat soon, then we jump on a tour bus and start touring for over a month in North America, then we fly to Europe for a month there, then we’ll be close to Christmas time. I’ve been looking forward to the bus tours all year – on full-on tour mode you usuallly have to get up early to get on planes. On the bus, you can work all day, live the dream and then just go to sleep and wake up in the next city – it’s so good!”

The R.I.P Shame World Tour kicks off in October, giving fans enough time to memorise the lyrics to the songs on the new E.P (or convincingly mouth along to them). Headliner will grab the coloured hairspray and glow sticks.