Team Cedrice: The Voice Within

After a lifelong identity struggle, Cedrice reveals how music helped her find the voice within.

Even when Cedrice talks, she sounds like a singer – which is somewhat ironic given that she didn’t even consider herself a “proper” singer when she was overheard humming to herself one fateful day at university.

A student that was sitting next to Cedrice asked if she was a singer. Cedrice knew she could sing all right, but did she consider herself to be a singer? She didn’t read music well, and didn’t have much experience performing, so no, she didn’t think she would count herself as a singer. Undeterred, the student (and her close friend to this day) asked her to sing an Alicia Keys song. Shortly after, she joined his band, and her life hasn’t been the same since.

“That was the catalyst of this next chapter of my life,” Cedrice recalls. “There were no expectations. I just walked in and we started vibing. There was so much chemistry, and I haven't stopped gigging since the day I met them.”

Now living in San Diego, Cedrice was born and raised in West Los Angeles in a mostly African-American neighborhood. Of African-American, Irish, German and Filipino descent, Cedrice is very open about developing an identity crisis: “It got to the point where everyone just started to ask me, ‘What are you? What are you?’”

She didn’t speak Tagalog, so she wasn’t Filipino enough. She wasn’t dark enough to be considered black, and she certainly didn’t look white.

“If I didn’t speak the native languages of my people, then what was my voice?” she asks.

While Cedrice’s multi-ethnic ambiguity prompted her identity struggle, it also led her to find her voice within music – later finding comfort in the fact that her bandmates would also tick ‘other’ in a generic survey question if asked to pick what best describes them.

“Music has definitely given me something to focus on,” she admits, adding that she is aware of the privilege that her lighter skin affords her.

“Yeah, just knowing what your privilege looks like being a light skinned, ethnically ambiguous, exotic looking woman, you know? If I didn't have music, I'd be focusing on my image so much. I'm focusing on my expression, celebrating life and evaluating my past so that I can write my future.”

After conceding that she might be a bit of a singer, Cedrice continued to step out of her comfort zone and could be found at many an open mic night, or even performing at various farmers markets for the next few years.

“I was trying to get in where I fit in, and I wasn't sure where that was. You kind of throw yourself out there, put yourself on stage, make a fool of yourself and then figure out what works and what doesn't. I started performing at farmer's markets for six to eight hours a day with no pay – I would just get tips – and that's where I really developed my crowd interaction skills, my performing skills and my vocal techniques. It's the real hustle. A lot of people can turn into wallpaper music, where you're just there to serve everybody, and no one's really paying attention.” 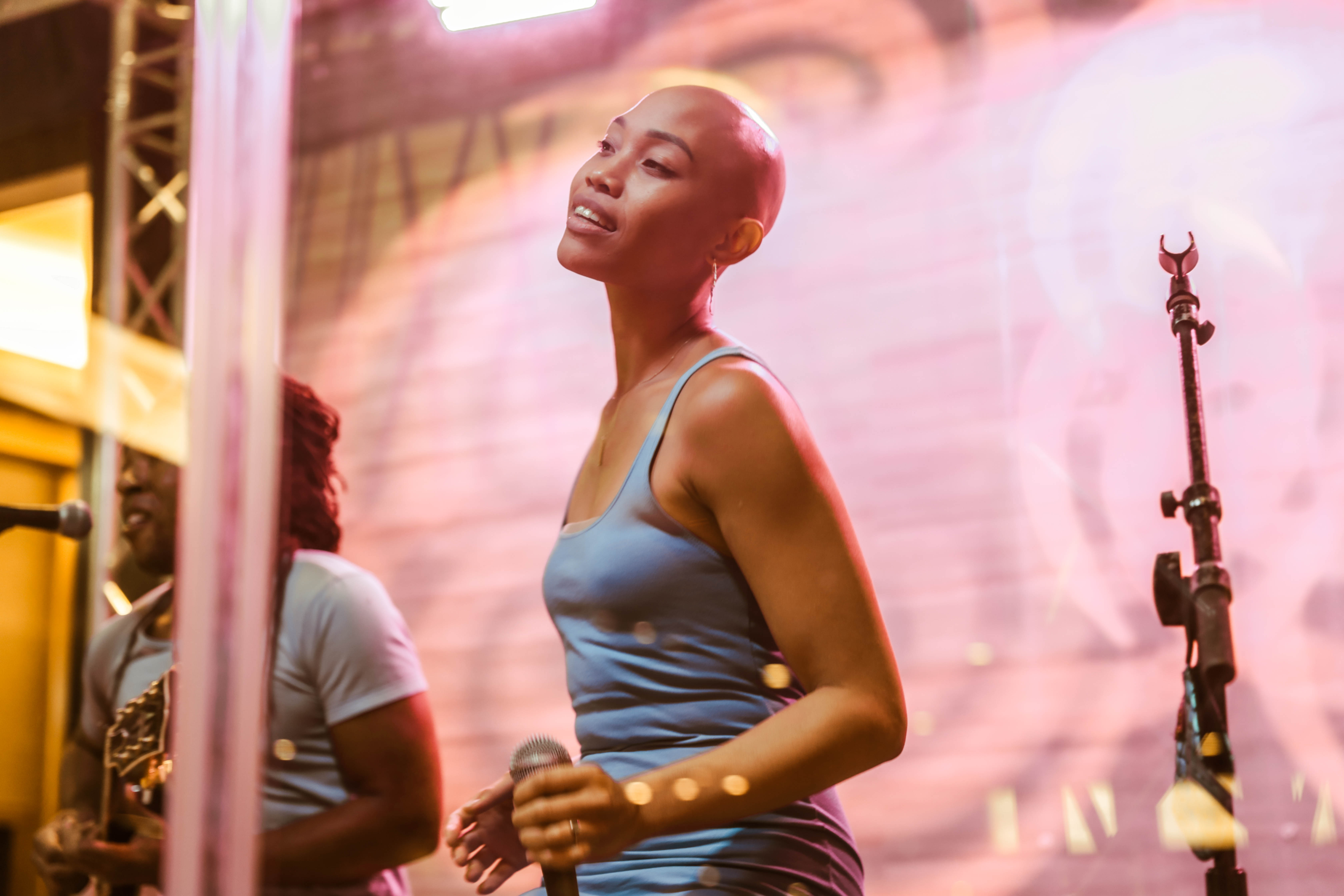 Cedrice appeared in season 18 of The Voice, filling the last spot on John Legend’s team and prompting an onslaught of “oh my Gods'' from the astonished – if not somewhat envious – coach Kelly Clarkson with her smokey and seductive performance of Fever. Although this wasn’t Cedrice’s first attempt at getting those red chairs to turn, having auditioned for the show twice before.

“The third time that I auditioned, I had already sung at coffee shops, restaurants and casinos, so I had developed a little bit of my artistry. I had an idea about the kind of musician and performer I wanted to be. And so when I went there, bald, [the first time she wore a wig; the second, a scarf] I was like, ‘hey world, I'm bald, and I don't give a care!’ I think that really played a part as to why they accepted me. I mean, yeah, my voice was good, but they're also looking for personality and a sense of self.”

I point out that Cedrice doesn't seem the ruthless, competitive type, which surely must have made the show’s brutal sing-off rounds particularly challenging?

“With every performance, I just got more nervous and more insecure because I was going up against such phenomenal singers – but I knew my strengths,” she answers.

“I knew that I was very unique and looked very expressive in my performances. So I knew that I was good, too! I'm competitive in board games, but when it comes to this kind of stuff, I'm just not competitive. I'm very ‘San Diego chill’ – and for me, there's room for everybody. Everybody can win, that's my attitude. So going into the competition reminded me that I need to be able to hold myself up whenever I feel insecure or whenever I feel like I'm really being put to the test.”

Cedrice describes her life after The Voice as like a bomb hitting her life, but then due to the worldwide pandemic, civil rights movement and wildfires in the US, says “the rings stopped abruptly.

“Suddenly you're here in the stillness and the quiet and you just watch the dust settle. That's kind of what my life is right now where I'm like, ‘okay, I need to just sit and think about all the things I did right over the last few years. I've been on the go for a while, so this is a time where I just need to really think about what my next move is, and take it to the next level of professionalism and seriousness.”

I'm focusing on my expression, celebrating life and evaluating my past so that I can write my future.

Finding one's voice as a songwriter is another identity struggle on its own, and Cedrice always knew that this would not change while she was singing other people’s music. It was time to find out what makes Cedrice, Cedrice. She needed to sing her own words. Poets helped her find clarity around a theme of ethnic confusion, and the pursuit of knowing who she truly is made her realize that where she truly belongs, is to music.

Cedrice used the lockdown period to take a step in that direction, releasing single Room To Grow, featuring Mark Pelli – a song about unconditional love, but perhaps not the type you’d expect:

“This idea came to me when I was acting on Broadway in New York. I was so lonely, so sad, and so homesick. I wanted to write something that gave me some sort of comfort. You have this sunny San Diego girl in New York during the worst winter ever in history, and I was going through a romantic breakup. It was a lot. The song is a reflection of a conversation with God.

"The verses are kind of like a back and forth between me and God. God's saying, ‘hey, I'm gonna offer you unconditional love’, and I'm saying, ‘okay, but maybe we could take it slow, I don’t know if I'm ready to get all that’. God says, ‘we can give it room to grow; we can give our relationship room to grow. But you don't need to be alone. I'll be right here. I'll keep loving you; just let me know when you're ready’.”

Cedrice works closely with QSC, whose Play Out Loud ethos has really resonated with her: