Singer-songwriter-turned mask-maker Hayley Harland is one half of indie-folk duo, TYGERMYLK, who has taken to cramming herself into a tiny old Kia during lockdown to perform gigs. Headliner catches up with her in between serenading fans in the back of her car.

Hayley Harland used to write songs, but now she makes masks. One half of Brighton-based indie-folk duo, TYGERMYLK (derived from the nickname of her childhood park ‘Milky Tigers’ and the 1996 Belle and Sebastian album), Harland and Aurora Bennett surfaced last year with debut single, What God Would Keep Us Apart – a heartbreaking song about Harland’s first love, whose parents locked away for two weeks after discovering their daughter was gay.

Since releasing their debut single, Harland and Bennett set to work on their first record, although the lockdown period hasn’t resulted in epic studio hours, as mask-making has taken over for Harland:

“Basically I make a face mask with tigers on it, and then for every face mask that is bought, one then gets donated to a key worker,” she says, speaking to Headliner from inside a tiny old Kia that used to belong to her grandad. She has recently been using the car as a makeshift live gig venue.

Currently staying with her parents in the land of no signal, Harland regularly drives to the top of the hill behind their house, parking right next to a mobile phone mast to ensure ultimate connectivity for gigs – and phone interviews.

“We're in quite a rural area and the Wi Fi comes down a little telephone line – and it is very rubbish,” she explains, admitting that she feels slightly guilty for saying that she’s feeling surprisingly upbeat despite the global pandemic.

“I think it's just because I've done one of those personality tests, and every time I do it, I come off as an introvert. And although I don't feel like an introvert, I actually really prefer being alone and isolated and all of that stuff. Not having to go out and have social engagements suits me really well!”

Elaborating about performing from “the tiniest car in the word,” she says that although no one in her family wants to actually drive it, they can’t bear to let it go:

“I have to put down all the seats to be able to fit me and a guitar in. It was my grandpa’s. He sadly passed away a year ago, and he loved his car so much that no one wanted to get rid of it. But no one in the family wanted it because it is this shitty little Kia,” she laughs.

“It is so small; my uncle was driving it around for months before, and he just hated it because he couldn't properly fit his whole body in it. It's perfect for me because I'm small! I mean, I'm an average sized woman,” she corrects herself. “I'm small enough to fit in the car. I love it and it reminds me of him – and it's very easy to drive!” 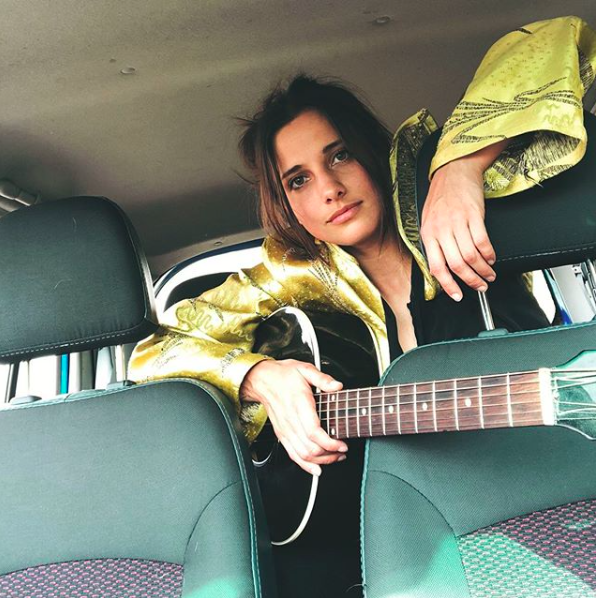 I've done one of those personality tests, and every time, I come off as an introvert.

Meeting Bennett at BIMM Brighton music collage, Harland knew she wanted to work with her when she first saw her playing the drums. Immediately deciding to form a band, it went through various different incarnations – which meant losing a few other members along the way.

“We just found that the two of us shared a really similar vision,” she says. “It just worked better when it was just the two of us – we were the two people that were driving it forward. So we kind of just got rid of the other members and carried on.”

Bennett plays drums on their records, sometimes bolstered by cellist, Racheal “all cellists are in high demand, so she can't be a permanent member,” Harland points out, while Harland plays “pretty much all of the instruments that I can make a justifiable noise on”.

What God Would Keep Us Apart

What God Would Keep Us Apart is an open letter to a girl Harland loved as a teenager, and says all the things she wished she should have said at the time. The track’s narrative of love and loss in the face of inescapable homophobia is nonetheless given an optimistic ending.

Harland hopes the single – released to coincide with Brighton Pride – will help those struggling through similar experiences.

“I dread to think of the suffering LGBT+ people with unaccepting families must be going through in lockdown. If you are having a hard time at the moment, you are not alone and you are not forgotten,” she says."

“When I was 16 I had a relationship with a girl. Her parents found out about it and basically locked her away. I thought she'd gone on holiday and I was like, ‘this is weird that she's not getting in touch with me’. When they finally let her out, she was like, ‘I've just had the worst couple of weeks of my life and I have to break up with you’. But she sort of wanted to keep the relationship going, and I didn't want to risk her getting kicked out of her house. Looking back on it, there's so many different things I could have done and I could have said to make the situation better,” she reflects.

Much later, inspiration struck when Harland was on a train:

I wanted to put all of those thoughts into a song, and it all spilled out of me. As soon as I got to my destination, I got in a room and just picked up a guitar. The song was written within a couple of hours – pretty much fully formed. It was an amazing thing to release that, and to release it during Pride in Brighton.

"It was our first release as a band and it got the most amazing response. It was such a humbling, lovely thing to do – all of these people just started hugging each other in the audience.”