SSE Audio recently supplied the audio package for the ATP tennis finals at the O2 Arena in London during the second UK Covid-19 lockdown.

The Nitto ATP Finals are the season-ending championships of the ATP Tour and feature the top eight men's singles players and doubles teams of the ATP Rankings.

For the last 12 year the event has been staged in London at the O2 Arena, welcoming more than 2.8 million spectators in that period. With the UK in the midst of the Covid-19 pandemic, this year's event had a different feel, played behind closed doors and broadcast live around the world and via social media accounts.

SSE Audio has well established relationships with both the ATP Tour and the O2 Arena, providing audio support to the finals each year since 2009.

In 2017 SSE completed a full refurbishment of the house audio and PAVA voice alarm systems at the arena and the company supplies on-site technicians for live events held there. SSE has supplied the ATP tour since the event first took place at the O2 in 2009.

In the absence of a live audience in the arena, the audio requirements this year focussed on providing a control package for audio playback, pre and post match interviews video clips and ambient mics around the arena. 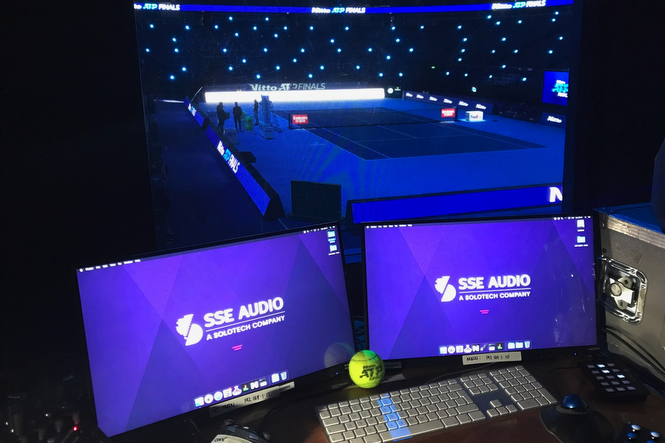 The ATP tour chose to highlight the #wemakeevents campaign with the hashtag featuring prominently in a ‘How We Build It’ video.