Located on the campus of the University of Wisconsin, Camp Randall Stadium has been home to Wisconsin Badgers football since 1895. Not only was the stadium built on the grounds of historic Camp Randall, a Union Army training camp during the Civil War, but it also features a seating capacity of 80,321, which puts it in the ranks of some of the largest stadiums in the world.

The stadium first installed a Q-SYS system in 2013 after converting from BASIS (QSC’s original network distribution technology) but a 2019 renovation deployed the Q-SYS Ecosystem, featuring the latest Intel XEON-based Q-SYS Enterprise Cores, to expand the system into all athletic facilities across the campus.

Stadiums typically require robust and reliable network AV systems to manage audio distribution for game days, concerts and other events, along with the ability to control audio and video sources on touch panels across the complex, and this installation was no different.

Camp Randall required fully centralised audio, video and control processing throughout the stadium, but also wanted to deploy processors in some of the athletic facilities.

The AV system needed to be able to distribute gameday audio and announcements throughout the venue’s many zones, and the venue's club areas also needed simple AV control for use during games and other events.

The AV system will continue to grow with new zones and additional sources, so it was crucial that the system be software-based to best prepare for future growth. 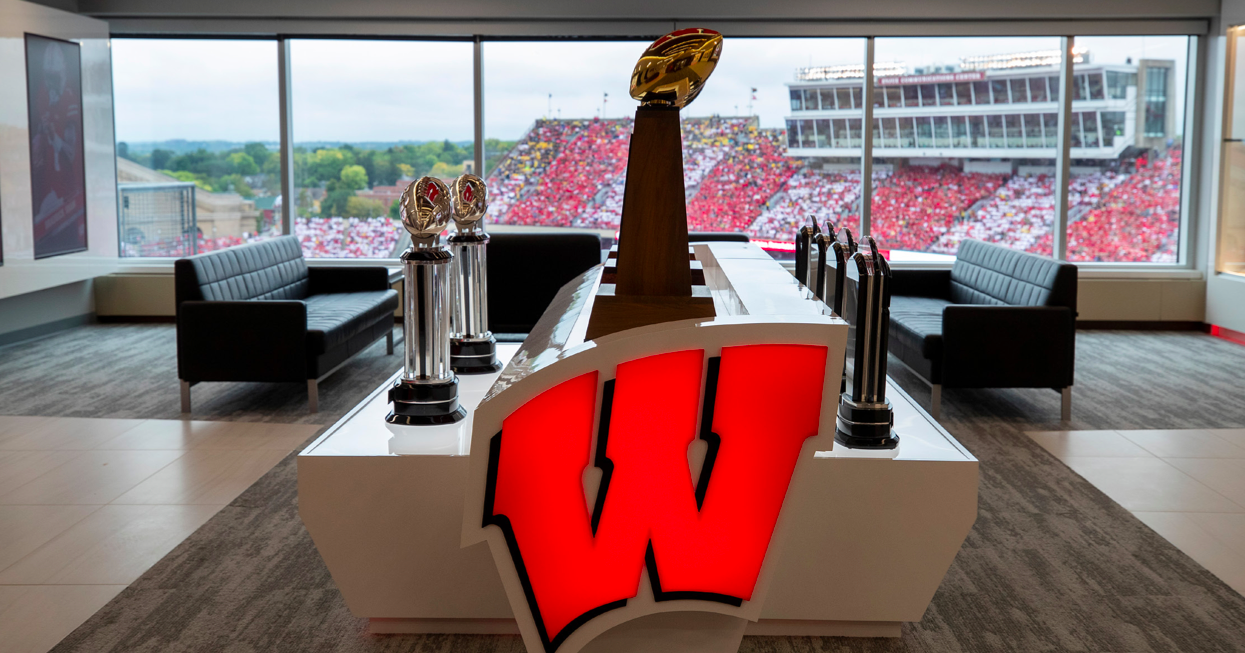 Regardless of the event type, AV systems that support live events are mission critical. Camp Randall had years of success with a Q-SYS system, and was looking for increased processing headroom and additional channel capacity along with the ability to expand into additional areas of the venue.

Camp Randall deployed a redundant Q-SYS Enterprise Core 5200 setup along with distributed network-based AV endpoints, such as amplifiers and audio I/O, throughout the facility. Being a software-based platform, built on powerful Intel chipsets, there is no need to deploy additional hardware to control or manage the distributed endpoints.

This results in far less hardware than a traditional AV installation, and greatly streamlines the ability to support the system along with other mission-critical services. Additionally, the use of Intel XEON processors in the Enterprise Core offers significant headroom for additional software-based features and functionality to be added to the system in the future.

The primary function of the Q-SYS system is to handle audio processing for over 90 QSC amplifiers (PL Series and CX Series), which connect to the system via Q-SYS I/O-Frames installed with DataPort I/O cards. This allows for control and monitoring of each amplifier via Q-SYS network touch screen controllers. 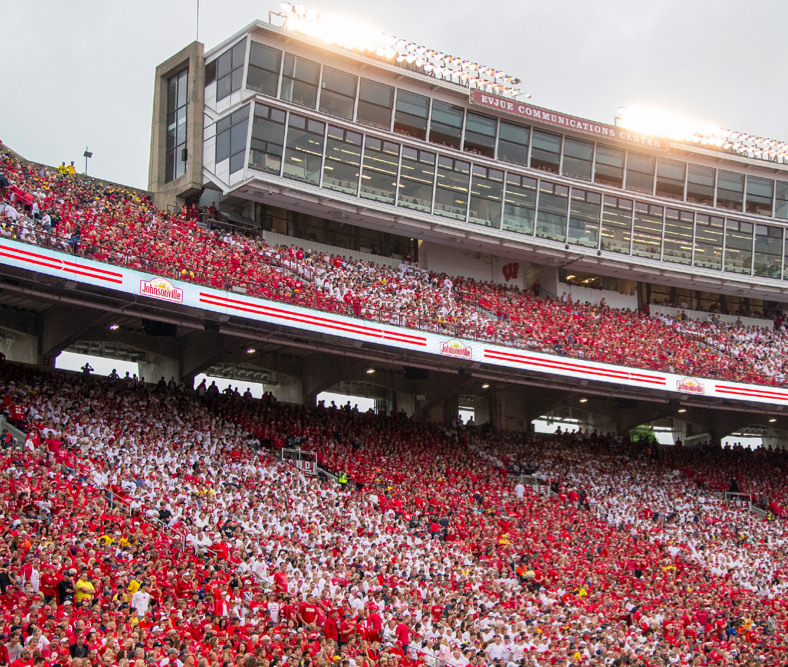 With an outdoor stadium in Wisconsin, temperature and humidity can change significantly throughout the day, affecting how sound travels. Q-SYS allowed Daktronics (system integrator for the Camp Randall system) to program a unique automated delay structure (thanks to the Q-SYS Scripting Engine) that would change audio delay times based on the temperature and relative humidity in each zone.

The secondary functions include distributed game-day commentary audio and background music along with software-based paging, which allows for important announcements to be heard throughout the venue.

After years of continued success with the Q-SYS system, Camp Randall wanted to expand into additional athletic facilities and practice venues. Each of these facilities feature a standalone or redundant Q-SYS Core processor setup, which allows for local I/O and processing when necessary.

To create an interconnected ‘system of systems’ Camp Randall also took advantage of Core-to- Core streaming, which allows for intercommunication between Q-SYS Cores processors via WAN. This allows for each of the facilities to stream audio sources from the main system, including game-day commentary, background music, and other announcements.

Shay McElwain, technical system director, who oversees all University of Wisconsin Madison athletic facilities, was an early adopter of the Q-SYS Ecosystem and was quick to take on programming responsibilities after commissioning of Q-SYS software-based control capabilities.

“I love how user-friendly it is to design, deploy and maintain a Q-SYS system,” McElwain explained. “Whether it’s creating a user control interface or working with the Q-SYS Scripting Engine, the simplicity is unmatched in other platforms. It’s allowed me to handle the majority of the system expansion in-house, which has brought major cost savings.”

McElwain used the Q-SYS UCI Editor to create custom UCIs for the club/suite areas, letting visitors select the game-day audio source – PA announcer, radio broadcast or TV broadcast, or they can choose to listen to the audio in the bowl, which includes the PA announcer and the University of Wisconsin band. 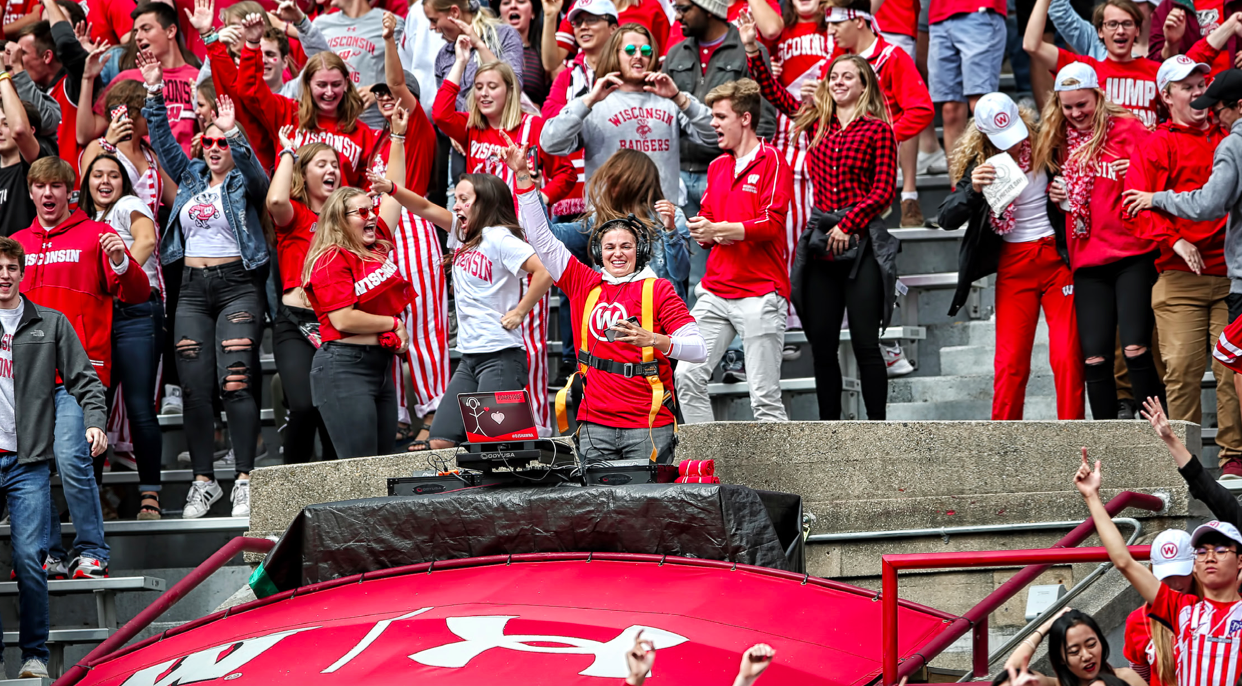 For a more personalised music experience outside of game days, integrated Attero Tech by QSC wall plates were installed in practice facilities to allow athletes to connect to audio from the mobile devices via Bluetooth and control via Q-SYS touch screen.

For the support staff, a more complex UCI gives technicians greater insight into how the system is performing. Technicians can view individual loudspeaker and amplifier temperatures, monitor amplifier status, and change the power state of specific zones, along with the ability to monitor audio levels and make source level adjustments to the clubs and suites, all from a single Q-SYS network touch screen controller.

Camp Randall adds about 6-10 new audio sources to their game day production per year, and hopes to add a number of outdoor suites stock with custom multimedia experiences to the system as well.

The software-based nature of the Q-SYS Ecosystem, coupled with the processing headroom provided by the Enterprise Q-SYS Core processors allow for future expansion that is both simple and cost-effective, as there is no need to add control processing hardware (or unnecessary integration points) when adding new AV endpoints.

“I’ve been working with Q-SYS and QSC a long time, and there’s a reason we keep coming back,” McElwain continued. “Q-SYS helps us deliver the best AV experience for our students and fans.”