Espace Mayenne is an architecturally impressive event site in Laval, in the west of France.

This futuristic, multifunctional facility will accommodate anywhere from 20 to 4,500 people for any kind of occasion, and has recently been equipped with the most versatile audio production systems, supplied by Nexo and implemented by Videlio Rennes.

The largest of the three venues is the Salle Mayenne, which can accommodate up to 4,500 spectators, and is able to host both sporting events and shows.

For this indoor arena, a Nexo GEO S12 system was installed, with 10 clusters positioned to cover the stands and the pitch area.

In total, 32 S12 cabinets were installed, yet the profile of the arrays is so low that the system is barely visible against the geometric arrangement of small acoustic baffles in the roof space.

Running on a Dante network, the system is entirely powered by just three amplifiers.

In the second venue, the Pegasus Room, up to 2,000 people can convene for a wide variety of events, sporting events and performances. Two clusters each made up of four GEO S12 line array modules cover the pitch, whilst just four PS15 point source cabinets cover the stand seating.

The Congress Hall can host up to 500 people for meetings, and has been equipped with a straightforward Nexo PS Series PA for speech reinforcement. Like the Pegasus Room, the system is run over a Dante network.

Under the direction of Frederic Desir at Espace Mayenne, the system design was executed by Grégory Aldea from Ducks Scéno, system integration was provided by Jean-Luc Imbert at Videlio Rennes, and additional design input was given by Nexo’s Engineering Support Division. 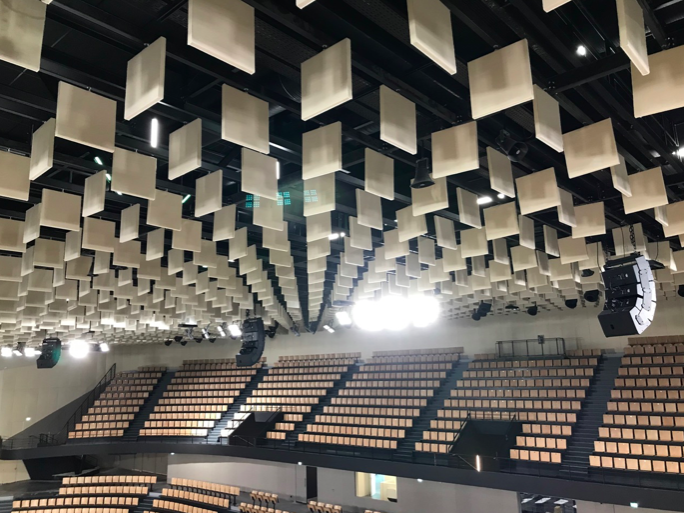