Focusrite Has The Super Bowl Covered

Since the late ‘70s, the Super Bowl has dominated television ratings, regularly setting records for USA viewership. Despite the realities of the pandemic, which included some disruptions in the NFL's season itinerary as well as limits on live attendance and protocols in place to prevent in-person viral transmission, 2021's Super Bowl LV maintains the distinction of being the USA's most watched television program to date for the year.

A hefty complement of RedNet A16R and RedNet D16R 16-channel interfaces was used to connect digital and analogue sources and feeds to and from a Dante Audio-over-IP network.

RedNet D64R 64-channel MADI bridges were deployed for connecting signals to and from the various digital audio consoles in the system, and for connections between production groups.

In recent years, ATK has rolled an extensive complement of cart-mounted JBL loudspeakers into place in support of the Super Bowl's halftime extravaganza.

“We had the speakers on lifts this year instead of the carts because we were not allowed on the field as per Covid protocol," said Kirk Powell, Super Bowl LV engineer in charge for ATK.

“The lifts are stationary, obviously. They're much closer to the audience, which didn't allow the sound to open up nearly as much as I would have liked. It worked out okay. But, I can't wait to get back to the carts – it just allows more seamless audio. We used RedNet gear for drive distribution for all of the speakers." 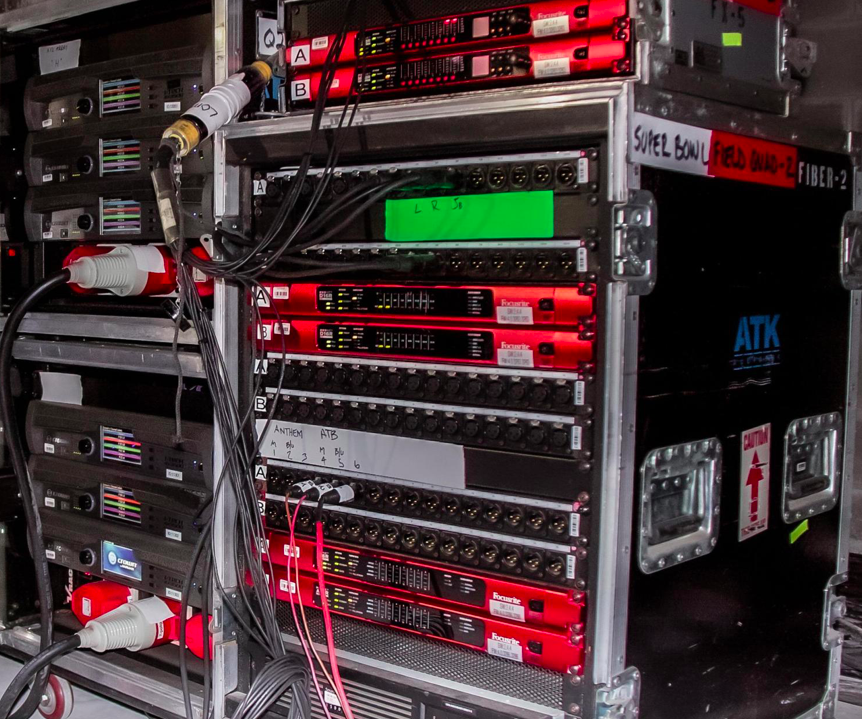 It was such a different show this year because there was no stage on the field. Kirk Powell, Super Bowl LV engineer in charge for ATK

Clock management during the Super Bowl is important for the teams on the field, but also for audio production. The RedNet D64Rs offer advantages in that regard, blending high channel count with the ability to convert sample rates between disparate audio systems on a multitrack scale providing glitch-free inter-system audio transfer and sharing without a common master reference clock.

While FOH and stage monitors could share a clock, Powell explained that the production tracks were on a different clock because they're not used all day long.

“The D64R allows me to break the clock between my system and the production tracks because they're done after halftime. They start to pack up, and I don't want to be on their clock and have them shut down.

“A third independently clocked system is used by CBS," he continued. “We're done before CBS at the end of the night."

If ATK had provided a master clock reference, that clock would have to stay live until CBS was also through for the evening. I used several D16Rs just to throw some feeds out for certain entities that needed them all over the stadium.

“Some people are able to take AES digital audio and the D16RS is great because we can separately sample rate convert those as well – we don't have to worry about the clock."

“It was such a different show this year because there was no stage on the field," added Powell.

“The stage was in the North Concourse area. That was a little less challenging, because we didn't have to worry about getting the stage on the playing field and connected at the start of halftime, like we have had to in the past – it was more like a traditional, non-Super Bowl show this year."

The Super Bowl crowds traditionally fill whatever stadium it's played in, and a hometown team would have guaranteed that in Tampa Bay in a normal year. But with the pandemic's social distancing mandates, the crowds were kept at about a third of capacity.

“The 7,500 local vaccinated healthcare workers hosted by the NFL helped," said Powell. “It got really loud; I was really surprised at the level, and I don't think the NFL used the piped-in audience reaction feed for the Super Bowl this year.

“They were really reacting to the game. It's not someone trying to hit a sample that reacts one way or another, and that reaction is not necessarily the way the real crowd would react. It was just so nice to be able to do a show, to be honest with you, and just be there with real people, doing a real show with a real audience. It's been so long, and it was just a breath of fresh air."