The sound recordists responsible for delivering this year’s ABB FIA Formula E coverage to the BBC recently made good use of Bubblebee Industries technology to help circumnavigate the impact of Covid 19, which had threatened to scupper the sport’s 2019/2020 season.

Normally in Formula E, the fully electric, single seater cars race around major city centres in front of thousands of spectators, but due to the pandemic, this was no longer a safe option.

It was decided that the season would be completed by holding six races over nine days – behind closed doors – at Berlin’s Templehoff airport. Live TV coverage was provided by host broadcasters Aurora Media Worldwide and North One TV, known as Formula E TV, which supply the international and English host broadcast feed to channels such as the BBC, Eurosport and Mediaset.

Formula E’s Sound Supervisor is Paul Halstead, who heads a dedicated crew of sound engineers, many of whom have extensive live broadcast experience and have been involved in Formula E since its first season six years ago.

“We work as a team but we have very distinct roles,” Halstead explains. “Scott Morton looks after ENG crews and is involved with the live presentation element, while I handle mic allocation around the track and mixing the international feed, along with any additional race support presentation.” 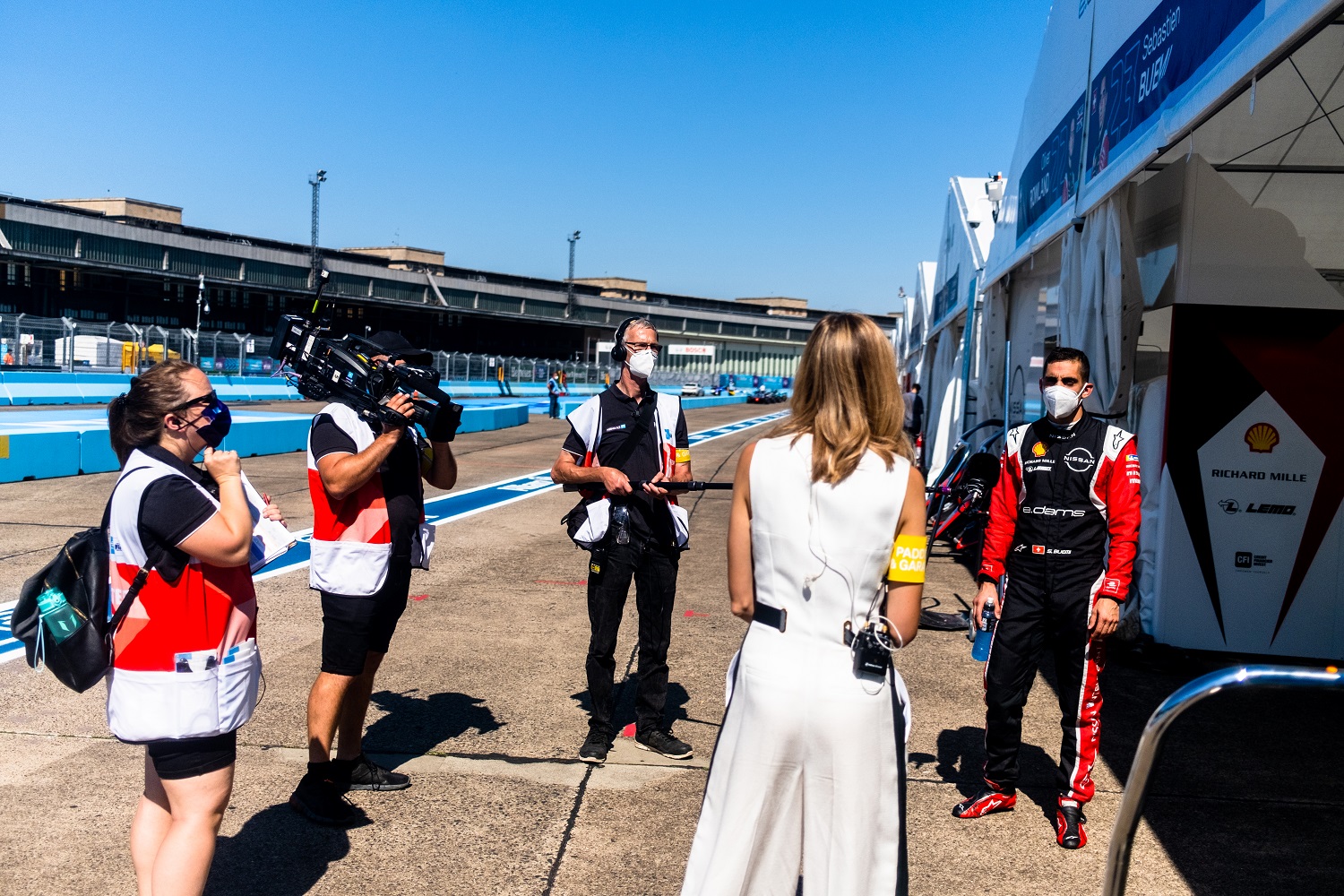 Presenters can’t get close enough to the drivers to share a handheld mic, and our sound engineers are not allowed to touch the talent. Scott Morton

For the Berlin races, the team had to contend with the German Government’s social distancing rules, which meant making changes to how the audio was captured.

Handheld microphones shared between interviewers and drivers were obviously out, so they switched to boom microphones and used Bubblebee Industries’ Spacer Bubble to get the right balance between wind protection and audio transparency.

“Switching to boom mics was a major safety protocol and we used them for more than 80% of our ENG and live presentation audio,” Morton explains. “In this new landscape, presenters can’t get close enough to the drivers to share a handheld mic, and our sound engineers are not allowed to touch the talent so we can’t easily fit lavaliers. Our solution was to give presenters their own stick mic and use a boom mic to capture the interviewee’s responses.”

Morton adds that the Spacer Bubble system proved a real winner during the event because it can be easily adapted to suit the weather and ambient noise levels. This three piece windshield solution for shotgun microphones is specifically designed for changing conditions and features a noise-free mesh base with coarse foam inside and a specially designed rubber mount that can be left on the boom or camera mic.

The foam and mesh are ideal for indoor recording, while short and long haired fur Spacer Covers are available for outdoor recording and can be quickly fitted to provide wind protection in all kinds of weather. 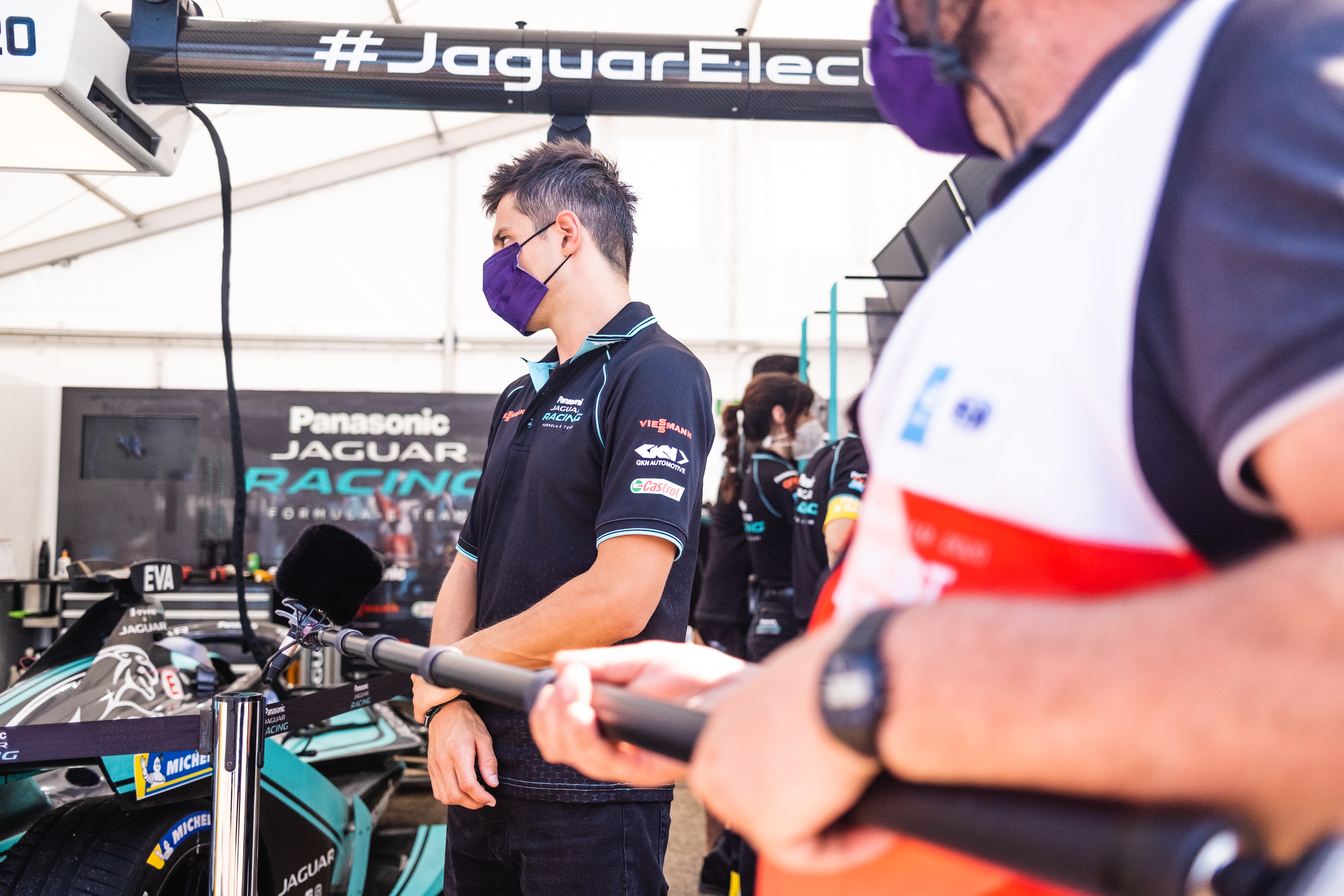 “The modular nature of the Spacer Bubble system was perfect for us because we could get variations in the shielding,” he adds. “Other systems are full on fur or nothing. We like the flexibility this system gives us because it means we are able to adapt to changing weather conditions much more quickly.

“We used them with various Røde and Sennheiser shotgun microphones and got excellent results. As so much of the audio for the Berlin event was captured on boom mics, Bubblebee Spacers were very much in evidence – especially as we didn’t worry too much about booms being in shot because there was so little we could do about it.”

Another innovation adopted by the Formula E sound team in Berlin was Bubblebee’s Sidekick In-Ear Monitor. This virtually invisible earpiece became a vital piece of the communication jigsaw because it allowed the sound crew, presenters and talent out on the track to communicate with the sound mixers back in the studio.
“The earpieces were great at blocking out noise and I was able to communicate very easily with everyone out on the track,” Halstead enthuses.

“Formula E is not as noisy as Formula One, which I have also worked on, but you still require a discrete solution where the presenters can hear the gallery. You can get away with earpieces instead of headphones for comms – and that makes a big difference to how the presenters look on the show.” 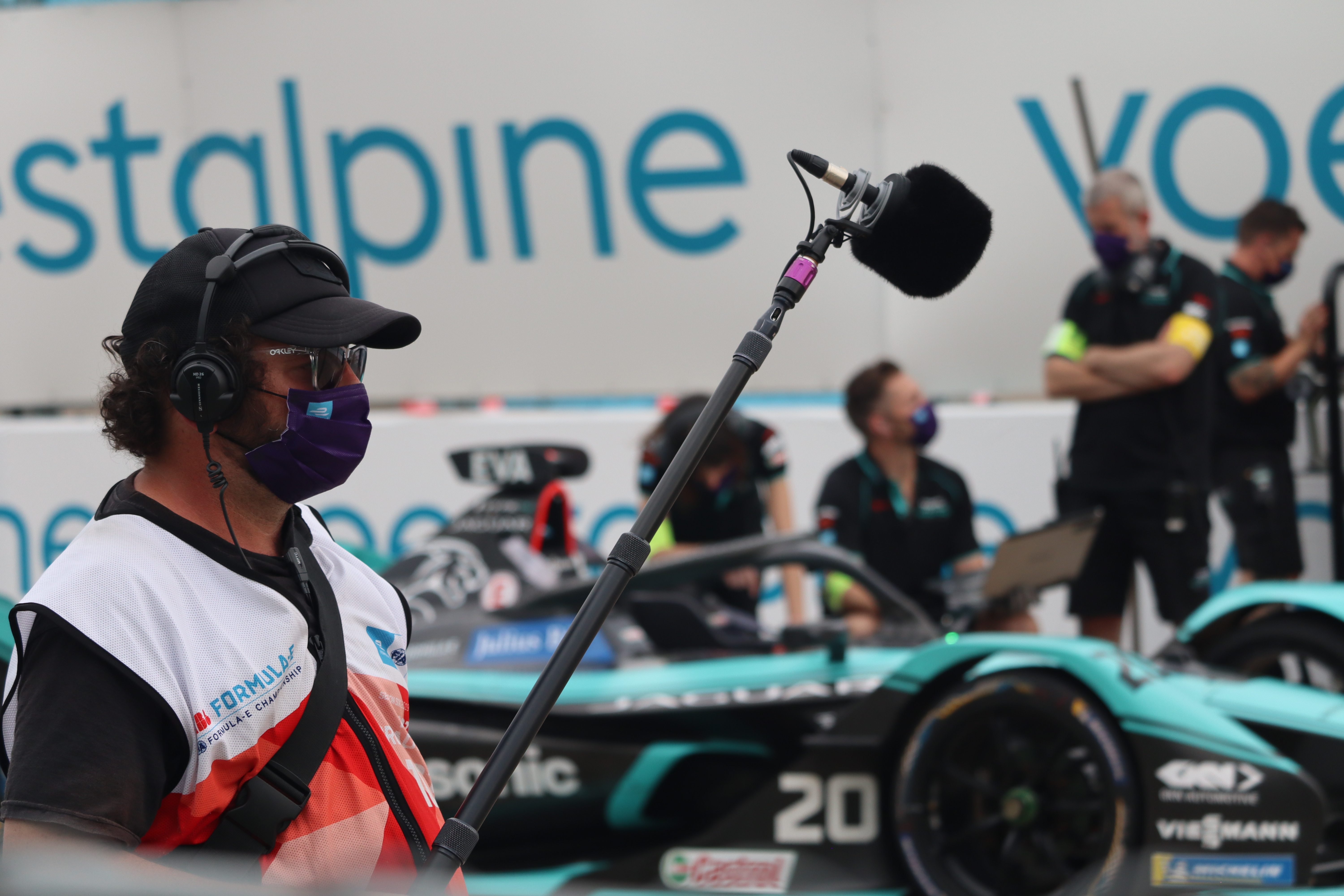 Designed to deliver comfort and intelligibility, Bubblebee’s Sidekick In Ear Monitor features the world’s first micro driver solution where the driver itself fits invisibly in the ear canal. Because it is so small and lightweight, it makes a great alternative to earwigs and can be comfortably worn for long periods of time.

Morton pointed out that the presenters (Nicki Shields and Vernon Kay) were very happy with the Sidekicks and were able to wear them for long stretches of time because they were so comfortable.

“From an aesthetic point of view it looked better on camera because you couldn’t see the presenters were wearing an earpiece at all,” he adds. “There was one occasion where I gave Nicki a telling off for not having her earpiece in when we were about to go on air, only to have to issue a grovelling apology when she pointed out that she did have it in – I just couldn’t see it!”

The presenters fitted and cleaned their own earpieces, which they found very easy. This was especially important because Covid restrictions meant they had to be responsible for their own kit.

“I work on a number of other live shows such as Gogglebox and I shall certainly be recommending Sidekicks to them because they are so invisible,” Morton noted.