The Collectv Keeps ‘Formula One: Drive to Survive’ On Track

The Collectv has announced its involvement in the production process of Netflix’s fly-on-the-pitwall F1 documentary series, Formula One: Drive to Survive.

The third season of the Box to Box Films production, covering the dramatic events of the 2020 Grand Prix calendar, will air on Netflix from March 19, a week before the 2021 F1 season commences at the Bahrain International Circuit in Bahrain.

The Collectv has been involved with Formula One since 2012, providing services to both Sky Sports and Whisper for Channel 4.

It has been involved with Formula One: Drive to Survive from the first season and plays a vital role in ensuring all data from Box to Box’s UHD camera crews is safely and securely ingested, backed up, transcoded, and sent on to post production.

The F1 Broadcast Compound shuts down rapidly after the main race has concluded and gets packed away to move onto the next race in a demanding schedule, so The Collectv has built special systems to handle the throughput in the timeframe required and that adhere strictly to Netflix’s backup criteria.

LTO and near-line storage is used on-site, and one or two types of transport drive, typically G-Technology or Lacie are maintained. Material is transcoded into DNxHD 36 before being sent on drives to The Farm in London for post production (though as the production schedule ramped up towards the end of the 2020 season this was switched to a direct 10GbE connection).

Taking up two racks in Box to Box’s production area, The Collectv’s system was initially based on rack-mounted Dell 7920 workstations, but has recently been re-engineered around HP Z2s to take advantage of their smaller form factor.

“The Z2s give us the power we need for transcoding the material before the compound is shut down and packed up for the next race,” explained Chris Sarson, MD and co-owner at The Collectv.

“They also allow us to transport the equipment in the hold in three large Peli cases rather than having to go cargo all the time, which gives us that much more flexibility when it comes to following the races around the world.” 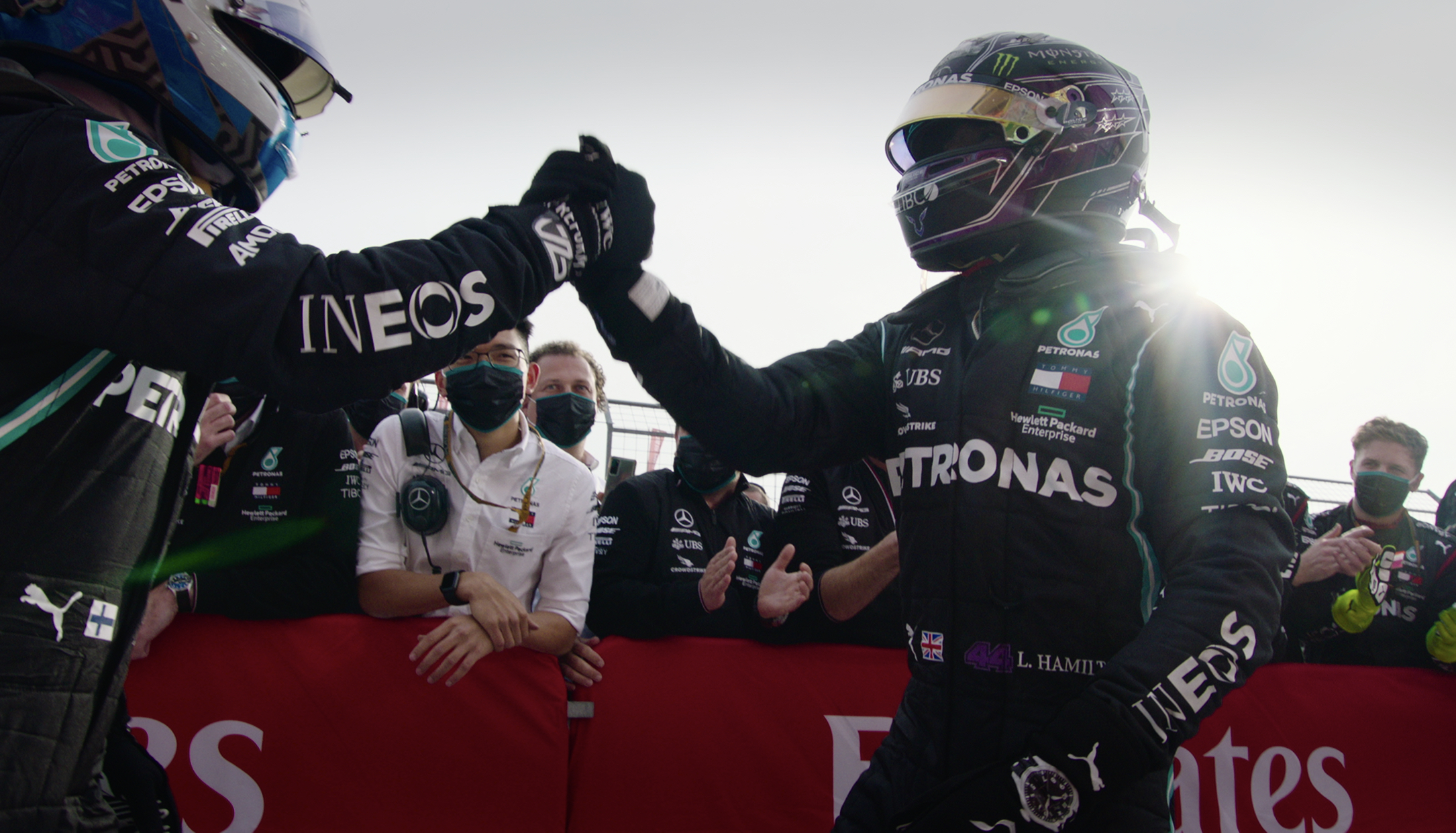 Flexibility was a key attribute last year too. The Collectv team was already out in Australia along with the entire rest of the F1 paddock last March for the start of the 2020 season when it was cancelled at the last minute due to the pandemic.

While racing did finally commence for what was Formula One’s 70th season in Austria in July, the 17 races that made up the 2020 calendar were very different from normal and The Collectv had to be extremely responsive to a schedule that evolved as the season developed.

“Our new equipment means that we can be based at the circuit and we can also be based out of a hotel room if need be, which is an important consideration in this era of biosecure production,” said Sarson.

“Also, for the last three races last season we added somebody on via a remote connection. As always, we had a person on the ground who was getting those cards, putting them in the card readers, and copying those onto machines.

"Then when they went off shift, we could have someone back at base transcoding, copying those files off the drives ready to be delivered to The Farm for post. It’s a big saving both in production costs and is something we’re looking to do more in the future.”

While it may have been the shortest for many years, the 2020 F1 season was also one of the most dramatic both on and off the track and featured Lewis Hamilton’s historic seventh world title, maiden wins for Pierre Gasly and Sergio Perez, Sebastian Vettel’s departure from Ferrari, F1’s response to the BLM protests, and much more.

People have started to realise just how crucial back-ups are, and the new media players all have extremely rigorous criteria in place to ensure no data ever gets lost. Chris Sarson

“People have started to realise over recent years just how crucial back-ups are, and the new media players all have extremely rigorous criteria in place to ensure no data ever gets lost,” added Sarson.

“Formula One: Drive to Survive is famous for those candid, off guard moments that provide real insight into the people behind one of the most-watched sports on Earth, and we’re delighted to play our part in ensuring those always make it safely and surely from the camera to the edit.”

“The Collectv has been an invaluable partner on Formula One: Drive to Survive from Day 1. Their industry leading technical knowledge, coupled with a desire to innovate has ensured they are central to our media management for this series, and several of our other titles,” said Tom Rogers, executive in charge of post production for Box to Box Films.

“The 2020 season tested their innovation to the maximum, and The Collectv proved once again why we continue to partner with them. They adapted our media management processes, workflow and infrastructure to ensure we could operate as seamlessly as possible within the parameters of our Covid secure production plan.”