On the opening day of the 2021 NHL Season on its new home on TNT, Turner Sports unveiled its brand new broadcast studio for the hockey league for the next three years – all powered by disguise.

To welcome the start of the season, a quartet of disguise vx 2 media servers and five rx II render nodes will now drive over 270º of wrap around visual content in the new studio which was built in just under two months with the help of disguise certified solution provider and Atlanta-based creative studio MEPTIK.

disguise’s ability to seamlessly combine LED and projection to create the huge canvas helped the team deliver the elements in the short timeframe. The disguise solution combined nine projectors, two LED walls and multiple cameras into a single end-to-end workflow that helped deliver the project smoothly from concept to the final solution.

“This is a full broadcast studio completely driven by disguise,” said Gideon Ferber, disguise’s director of product for broadcast, who oversaw the development of the studio.

“Turner Sports opted for the full disguise solution for its ease of use and efficiency of delivery.”

The studio’s set ties into TNT’s signature style and the branding theme of its design system known as ‘Black Ice’, and channels the look of modern arenas with their huge displays and lighting effects.

Subtle hockey-style elements include the oval shape of the set, which mirrors that of an ice rink, and the anchor desk’s ice shards base and hockey stick-shaped surround.

The set’s immersive displays are a unique combination of LEDs and projection with curved custom built LED panels on two sides of the oval and projection screens filling the rest of the visual canvas. 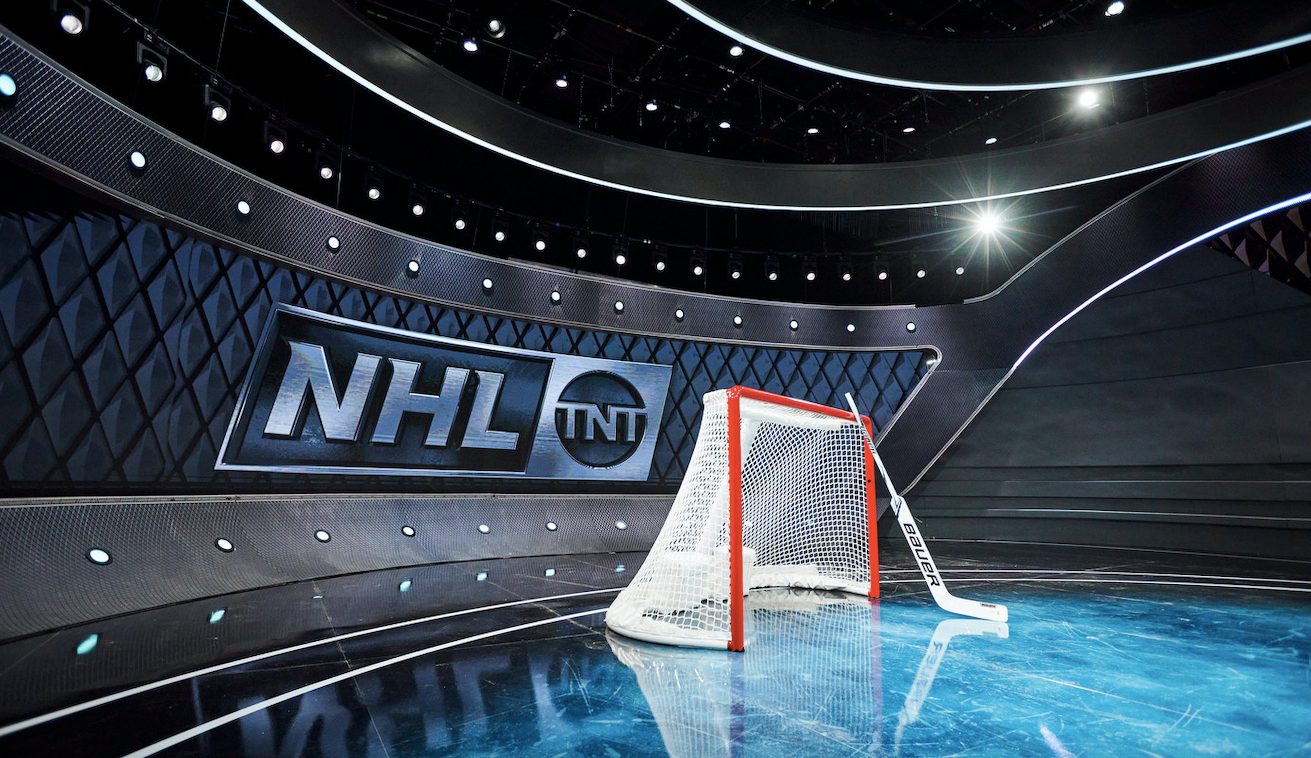 Video, images and data are mapped onto the displays via disguise. A full height diagonal LED panel display and two large tracking monitors in the foreground of the studio further blend the LED and projection displays and offer additional flexibility for shots and presenter positions.

Another disguise advantage was the ability to create a pixel-accurate 3D project and play it out before stepping into the studio.

“It was absolutely crucial to be able to pre-visualise the studio because they didn’t have time to do rehearsals or block shots in advance during the build,” Ferber explains.

“The studio was actually up and running a week before the go-live date, so the ability to preview the whole setup and how the content would look, then build in animations and graphics, was imperative.”

disguise and MEPTIK also trained Turner Sports’ in-house production team on the use of the disguise workflow for broadcast.

“We provided Turner Sports with a blank canvas for creatives to tell their best stories and engage the audience,” said Phil Ventre, vice president of broadcast at disguise.

“We were so proud of being able to turn around this project in such a short timeframe and have it be such a success.”

Turner Sports will run with this installation for the next three years, exclusively for the NHL.