Birds in the Moon, a provocative new chamber opera with music by composer Mark Grey, has launched a national tour based on a revolutionary staging concept: the entire production is housed in a 20-foot shipping container that can be quickly set up for outdoor performances at essentially any location.

To simplify audio production while also offering an extended horizontal soundscape, the production utilises 12 Meyer Sound self-powered loudspeakers mounted on the container and on fold-out wings.

The show is mixed on an iPad with Meyer Sound’s Spacemap Go spatial sound design and live mixing software.

The mobile opera debuted at Domino Park in Brooklyn in early May as part of the New York Philharmonic’s free, city-wide Bandwagon 2 program.

Grey created Birds in the Moon with flexibility and portability in mind. The idea was to reach reasonably large, open-air audiences while still providing a dynamic and panoramic soundscape – and to do so with a streamlined system that supports both automated and live workflows.

An accomplished sound designer as well as a composer, Grey turned to Spacemap Go as the foundational tool for implementing his ambitious aural concepts.

“It’s been amazing working with Spacemap Go over the past year, exploring all that it can do,” he said.

“It has really outperformed my expectations, for example, in the way you can automate sonic trajectories over time, capture that scene, and then move on to the next. And recalling everything is simple, as Spacemap Go integrates effortlessly with other software programs.” 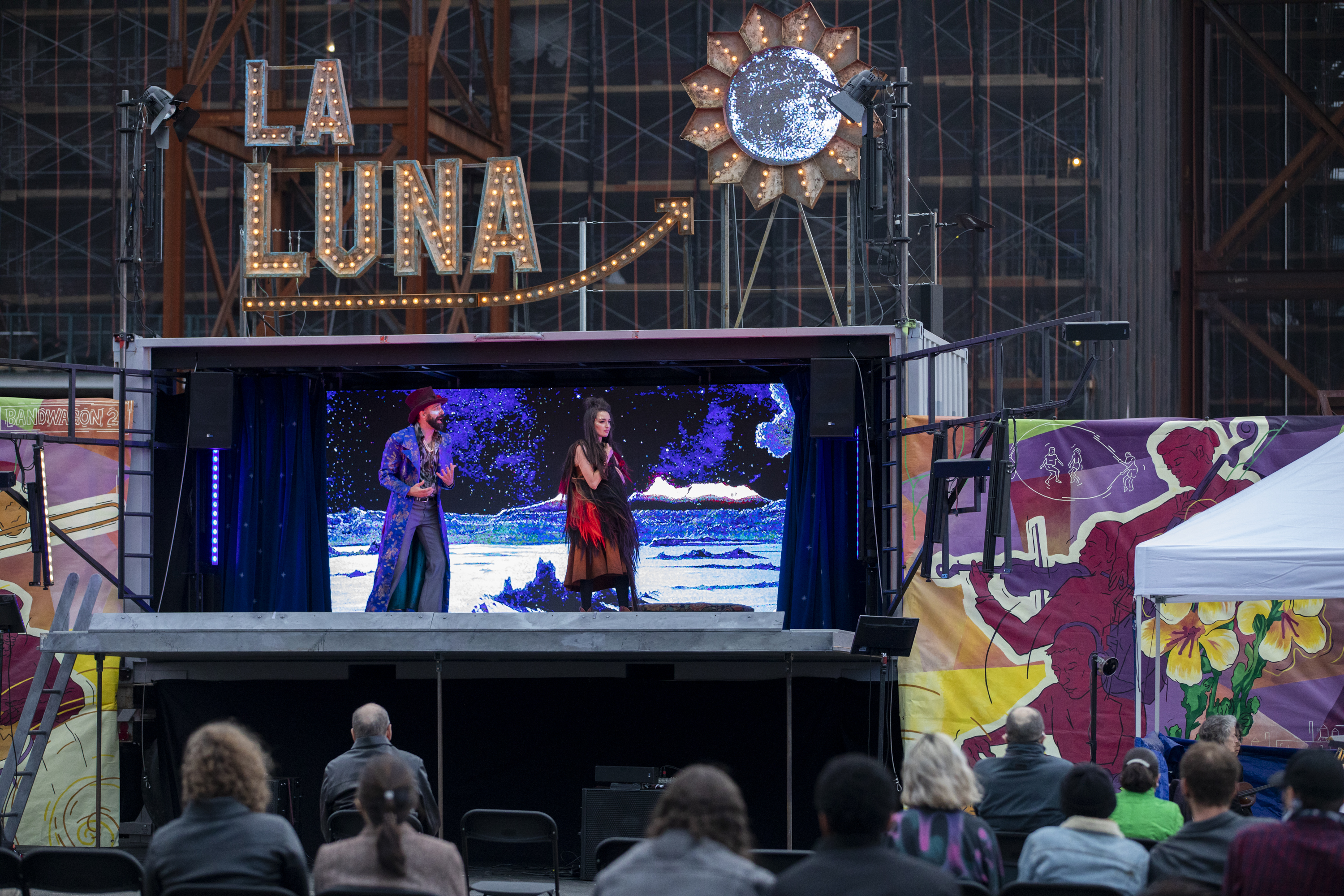 The entire front end is extraordinarily simple: two wireless microphones for the performers, four DPA 4099 microphones for the instruments via preamps, and a vintage stereo reverb unit all feeding directly into the analogue inputs of a Galaxy 816, along with 24 channels for electronic soundscapes from the Mac Mini via an AVB network connection.

“We’ve proven that you can set up a great system without a ton of outputs, and Spacemap Go is key because we can do it all without using a dedicated mixing console,” Grey continued.

“Each scene in the show has a Spacemap Go Mix Snapshot with labelling, configuration and Spacemaps assigned to the channels. We then perform the mix live on the iPad with Spacemap Go. When the Ringmaster is on top of the shipping container, we mix his position using a Spacemap that drives the X40s harder.

“When he comes down, we crossfade manually between two Spacemaps to bring the image down and achieve more gain before feedback by bringing up the UP4-slims and backing off the X40s with a slider.”

QLab running on a Mac Mini provides audio playback via Milan AVB directly into the Galaxy, and is the show controller that recalls Spacemap Go Mix Snapshots in the Galaxy 816 and lighting, as well as video cues hosted on a second Mac Mini.

Grey added that he has been astonished at the spatial effects he could achieve using Spacemap Go, despite having less than 60 feet of spread between the far end loudspeakers.

“It’s not really surround in this case, but more like panoramic stereo, but with depth to it,” he said.

“When I put content through the Ultra-X40 main speakers to listen as a reference, it has good separation. But when I put it out into Spacemap, creating a trajectory across the open wings, it just opens up until it seems like it’s 50 feet wider than what it should be.

“It’s pretty amazing when you come up with something conceptually and then translate it into the real world in a performance. That’s where Spacemap Go has definitely outdone itself.”

This mobile venue has become the stage for the entire Bandwagon 2 series of four weekend-long festivals across New York City.

“There are so many curveballs that happen with the Bandwagon festival,” said Grey. “With the various acts that come through, we have to be flexible to mix on the fly. Spacemap Go makes this all possible.”

After a successful New York run, Birds in the Moon will make its West Coast premiere September 1-4, presented by The Broad Stage. The four outdoor performances will take place at Lot 27 in Santa Monica, California.