A petition launched to rescind the Golden Globe nominations for Sia‘s film Music has reached over 65,000 signatures.

Sia attached a warning message to her feature directorial debut shortly after the controversial film scored two Golden Globe nominations, and notably the comments have been turned off under the film’s trailer on YouTube.

The film stars Sia’s frequent collaborator Maddie Ziegler, who is not autistic, as a nonverbal autistic teen.

“I promise, I have been listening,” Sia tweeted. “The motion picture MUSIC will, moving forward, have this warning at the head of the movie. I plan to remove the restraint scenes from all future printings. I listened to the wrong people and that is my responsibility, my research was clearly not thorough enough, not wide enough.”

The disclaimer addresses part of the film that depicts the use of restraint in sequences involving Ziegler’s titular character.

The National Autism Association defines restraint as “physical force used to immobilise – or reduce the ability of – an individual” and condemns it as “dangerous and abusive".

“MUSIC in no way condones or recommends the use of restraint on autistic people,” reads the new warning on Sia’s film. “There are autistic occupational therapists that specialise in sensory processing who can be consulted to explain safe ways to provide proprioceptive, deep-pressure feedback to help [with] meltdown safety.”

Of course, this is not the first time an able-bodied actor has played a character with a disability.

Eddie Redmayne, Colin Firth, Daniel Day-Lewis, Dustin Hoffman, Tom Hanks, Al Pacino and Jamie Foxx have all won Oscars in the past two decades by playing visibly disabled characters; famously Hoffman portrayed an autistic character in Rain Man, while Leonardo DiCaprio received his first Academy Award and Golden Globe Award nominations for playing a developmentally disabled boy in What’s Eating Gilbert Grape? – without the surrounding controversy Sia has experienced for Music – pointing to a new outlook on what is now considered appropriate in terms of representing disabled people in films.

In the petition, Rosanna Kataja (who describes herself as an autism ally) and Nina Skov Jensen (who is autistic) called the film “severely ableist” and say it contributes to “harmful stereotypes of autistic people”. 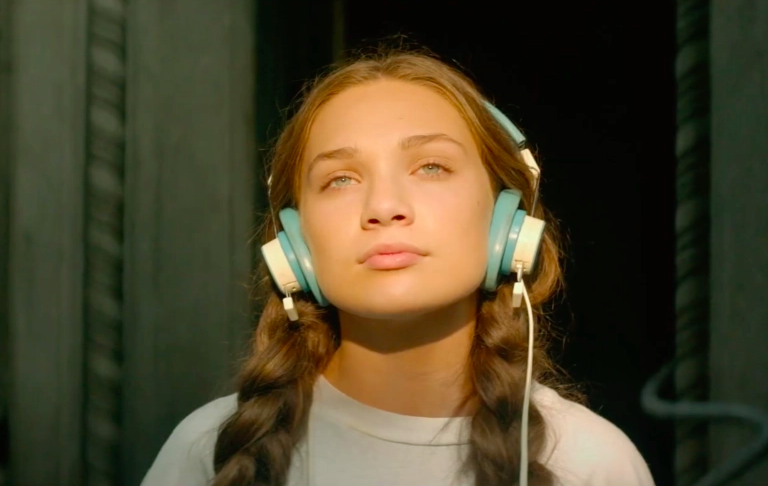 The change.org petition reads as follows:

“Sia's debut movie Music is severely ableist and contributes to harmful stereotypes of autistic people. The Golden Globes must rescind its two nominations for ‘Best Musical/Comedy Picture’ and ‘Best Musical/Comedy Actress: Kate Hudson, and the entertainment industry must promise to actively work towards inclusion and better disability representation.

Sia has claimed the movie is a ‘love letter to the autism community’, however, the music segments are filled with strobing lights, colors, loud sounds, and quick camera movements, which is very overstimulating. About one in four autistic people have epilepsy, so the movie can cause seizures and is also very uncomfortable for those without it.

"Despite making the movie ‘for’ autistic people, Sia has made it in such a way that a majority of us will be unable to watch it.

“Secondly, actual autistic people were ignored in the casting process when Sia cast neurotypical Maddie Ziegler to play the autistic character, Music because she ‘can't do a project without’ her. That is not a valid reason to create a movie about autistic people without including autistic people in it. How does one act autistic, you may ask. If we look at Ziegler's portrayal, the answer is by stereotypically mimicking autistic people the exact same way autistic people have been bullied and mocked their entire lives.

“It also enforces the idea that autistic people are not good enough and that their autism is better portrayed by someone with no concept of what it is to be autistic. To make things even worse, Ziegler learned how to ‘act autistic’ by watching videos of autistic children having meltdowns uploaded to YouTube by their parents without their consent.

“Autistic Sophie Buck asks in her article on Dazed, ‘why autistic people [are] shamed for being themselves, but a neurotypical actor gets rewarded for inaccurately and reductively assuming an autistic identity?’.

“Music is also used as a prop to advance the other characters' stories and lives. Not once are her feelings and thoughts expressed or even sought out. What about the trauma from watching her grandmother passing? What does she think of suddenly having her estranged sister take care of her? Does she want Ebo to move in, the grown man who restrains her?

“As non-speaking Niko Boskovic says in his essay: ‘I think there are two points which stuck out to me. First, that there is a caricature of autistics which relies on depicting us as headphone-wearing, gaping innocents who are symbols of purity there to remind us of selfless sacrifice.’

“And ‘second, the assumption that we have no dreams or hopes for the future of our own, and that the life experiences of everyone around us, i.e. those without disabilities, are central and more important than our own dream for the future. In the movie, Music is gifted an AAC device to help her communicate, but it only seems to be able to say ‘I’m happy’ or ‘I’m sad’. AACs usually have thousands of unique words programmed. It highly underestimates the intellectual capabilities of autistic people. Non-speaking does not mean incapable.

“Positional Asphyxia. That is how 13-years-old autistic Max Benson died in 2018 when he was physically restrained by staff at Guiding Hands School. Max was held in a prone restraint for an extended period of time and was forced to urinate and vomit on himself before becoming unresponsive.

“It is far from the only case of positional asphyxiation in autistic people being restrained during a meltdown. Sia’s decision to include this inhumane treatment is a testament to her ignorance and complete disregard for the safety and needs of autistic people.

Sia’s handling of the comments by disability activists so far has been insensitive, irresponsible, and invalidating. Rosanna Kataja and Nina Skov

“Sia’s handling of the comments by disability activists so far has been insensitive, irresponsible, and invalidating. When faced with justified critique, Sia decided to personally attack members of the community e.g. when she replied: ‘maybe you’re just a bad actor’ to one autistic individual who expressed their ability and willingness to act in her movie.

“Furthermore, Sia claims to have researched autism for years, but the fact that she collaborated with Autism Speaks, easily identified as a eugenics-promoting hate group, is a testament to the severity of her lies. She refused to apologise and only did so after receiving the nominations out of fear of a boycott, which is exactly what we urge all of you to do.

“She did announce that she is removing the restraint scenes, but that doesn’t change the fact that it was nominated before Sia made this decision. The damage has already been done. Update: the restraint scenes have NOT been removed and there are no warnings in the movie.

“In light of this damning evidence, we call on the Golden Globes to rescind its nomination in both categories. We also call upon the entertainment industry to create a more inclusive workspace that will allow autistic people to become part of the industry. We are already seeing more inclusion of minorities, but disability inclusion is non-existent, which is deeply immoral and concerning.

“When representing autistic people, listen to actual autistic people, not just social workers, parents and organisations. We are the only ones who know what is best for us and what it is like to be us. We also call upon other members of the industry – such as actors, producers, writers, and musicians – to call out the movie and its enablers, and to show support to the autistic community and its wishes.

“We call on HanWay Films and Vertical Entertainment to immediately stop the distribution of Music, and on any streaming platforms planning to show it. We call on the actors to apologise and distance themselves from the movie. Your silence is louder than you think.

“Lastly, we call on YOU to sign this petition, to share it, to demand justice, to be an ally of autistic people, and to listen to the autistic community. Let’s make history together!”