The Flaming Lips have held two ‘covid-safe’ gigs in Oklahoma, with both the band and their audience inside individual inflatable balls.

The concept for the show took inspiration from frontman Wayne Coyne’s own zorb ball, which he usually rolls over the crowd in during performances.

Each show accommodated 100 bubbles, holding up to three people each, with the band inside their own capsules.

In Coyne’s opinion, the ‘space bubbles’ are "safer than going to the grocery store".

Inside each bubble was a high frequency supplemental speaker which helped prevent the sound being muffled, as well as a water bottle, a battery-operated fan, a towel and a "I gotta go pee/hot in here" sign.

If it became too hot, the bubble was refilled with cool air using a leaf blower, and fans who needed to use the toilets were escorted by venue staff once they had put on a mask and stepped outside their cocoon. 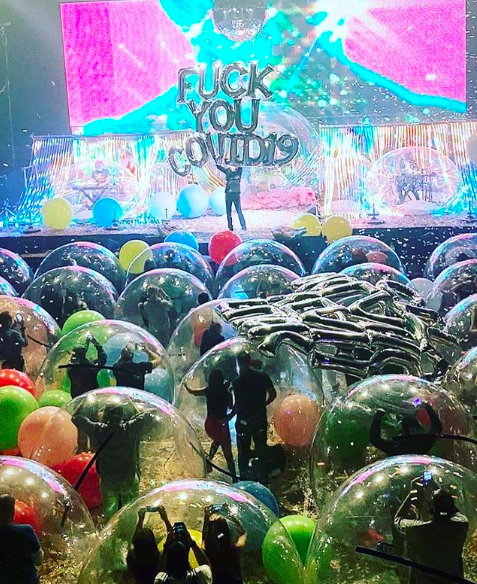 The band held a test run for the concerts in October after debuting the idea in a one-song performance for Stephen Colbert's US chat show last June.

"It's a very restricted, weird event. But the weirdness is so we can enjoy a concert before putting our families and everybody at risk," Coyne told Rolling Stone at the time.

"I think it's a bit of a new normal – you might go to a show, you might not, but I think we're going to be able to work it out."

A lot of open space around the venue is required to pull this off so that masked ticket holders can remain socially-distanced before they get into the bubbles – a process that reportedly takes about 20 minutes.

The bubbles are said to hold enough oxygen for three people to breathe for over an hour and 10 minutes before they need to be refreshed, although a towel is needed to wipe down the condensation.

According to an instructional video posted on the singer's Instagram feed, the concert ended with everyone rolling their bubbles to the exit door, where they had to re-attach their masks before unzipping and leaving the venue.

Coyne also held up silver balloons that spelt out “FUCK YOU COVID-19” and “FUCK YEAH OKLAHOMA CITY” during the concert.