Yungblud’s cover of David Bowie’s Life On Mars was played as NASA completed its latest Mars landing this week.

The space agency’s Perseverance rover descended on Mars on February 18 to search for signs of ancient life and collect samples for analysis back on Earth.

A livestream on NASA’s YouTube channel tracked the rover’s journey, with employees from the organisation giving insights on the risks involved with the mission and more. When the rover landed successfully, they played Yungblud’s version of Bowie’s classic hit.

"One of the most incredible nights of my life," he added. "Always remember anything is possible, man. There is nothing you cannot achieve, if you can imagine it you can fuckin' do it! Never let anyone make you feel you aren’t good enough. Be individual, be yourself. There is life on mars."

“‘Among the twilight and stars, Like a rocket to Mars…’ The eternal question first posed by Bowie 50 years ago. Well now NASA’s Perseverance Mars rover is on a mission to find out if there WAS life on Mars at least.

“Persevere is set to land on the Red Planet today and will seek signs of ancient life and pave the way for future astronauts.

“It’s obvious what song should soundtrack this mission of exploration, which is why if the rover lands successfully, you’ll hear Yungblud’s cover of Bowie’s classic at the end of the live landing show.” 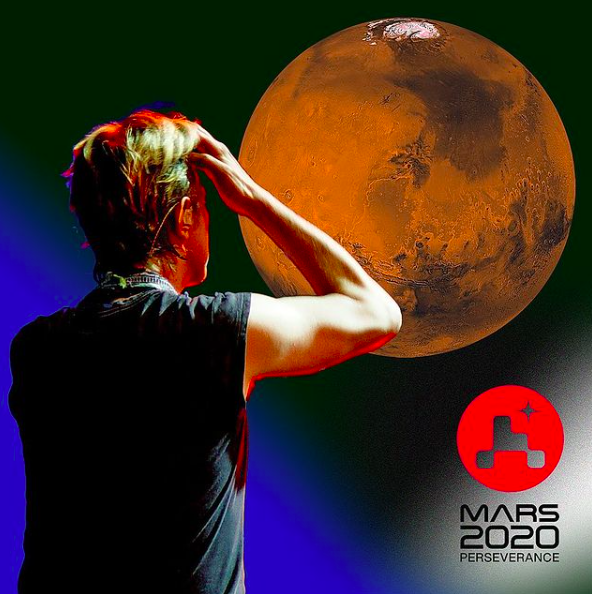 Yungblud was on BBC’s The One Show after the landing, and shared how he found out that he would be soundtracking the landing:

“First of all, I am as ready as a rabbit on Easter. I love space so I am here for it. I remember my 23-year-old manager rings me on the phone. It was late ‘cos he’s in L.A and it must have been midnight ‘cos I’d had a couple of beers, so I was already kind of out there.

“He’s like, ‘Yo, I just got off the phone with NASA’. I’m like, ‘Alright, yeah cool, what’s it about? You leaving me to go be an astronaut?’

“He said, ‘No you idiot, it’s about you! If the Mars rover lands successfully, they’re gonna play your cover of your favourite artist of all time, David Bowie, alongside it. I’m just like, ‘Nah man’, that just sounds like someone is just completely off their head telling you a mad story.

“It’s completely unfathomable. Someone needs to slap me so I’ll wake up.”