A new Meyer Sound system based on Leopard line array loudspeakers is the keystone component of a complete audio upgrade for Omaha’s up to 18,300-seat CHI Health Center arena.

Integrated and installed by the Sports and Entertainment division of Alpha Video, the new system replaces a sturdy but dated Meyer Sound point source cluster system that had been in place since the arena first opened in 2003.

“The durability and craftsmanship of the Meyer Sound speakers outlasted most of the rest of the system,” notes Gino Meyer, manager of audio-video technology for the Omaha Metropolitan Entertainment and Convention Authority (MECA), the venue’s manager and operator.

“So when it came time to upgrade to the latest in line array technology, going with a new Meyer Sound system was a no-brainer.”

“Creighton University men’s basketball is our main tenant here, so we really wanted a system with both very high intelligibility plus a really solid low end,” says Meyer. “Since most of the incidental music for them is hip-hop. We really needed a system with punch, and the new Meyer Sound system definitely delivers.”

The system’s 88 Leopard line array loudspeakers are configured in six hangs, with four arrays of 16 each at the corners for near and far throw, and two of 12 each for the end arrays with a shorter throw.

For low end impact, the 12 900-LFC low frequency control elements are deployed in four cardioid arrays, with two LF arrays of three each flown over the end LEOPARD arrays and two on the sides between the corner arrays. System drive and processing is courtesy of five Galaxy 816 network platforms, with three RMServer implementing comprehensive remote system monitoring.

The system produces remarkably uniform coverage across the full bandwidth, according to Alpha Video’s Fred Street:

“Meyer Sound likes to hit within a couple dB consistently, and we’re doing that here,” he says. “Predicted maximum levels are well over 90dB, and we’re certainly capable of doing that. We didn’t have time to do any formal intelligibility measurements, but it really wasn’t necessary. The clarity is amazing. It’s smooth, consistent and beautiful-sounding, top to bottom and all the way around.”

For Jeff Volk, the bottom line is making the sound work with the contemporary shift in sports video presentation:

“It used to be just speech reinforcement in the PA, but what we’ve designed gives them a full range of music playback capability, including a lot of low frequency power. Now when the basketball team comes out, they can complement the opening video with a lot of low end punch to match the visual elements on the screen. Yet it still delivers a very high level of speech intelligibility, even when announcements are over the music.” 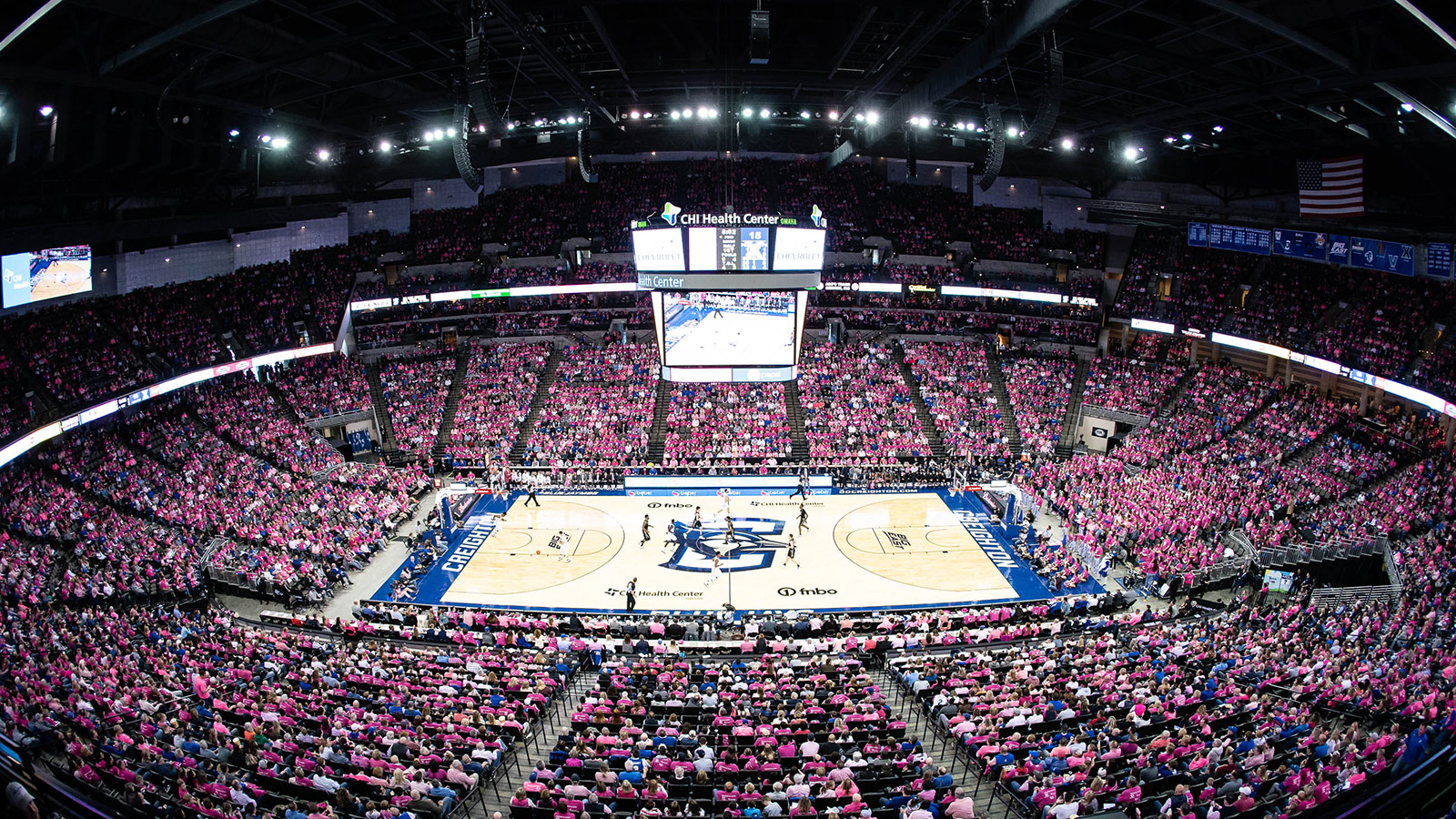 Testifying on behalf of the principal user of the venue is Joe Willman, director of marketing and broadcast services for Creighton University Athletics:

“The new Meyer Sound system certainly has delivered,” he enthuses. “Whether you are courtside or in the last row, you get clear intelligibility and enhanced dynamic range.

"We’ve revised the way we create content for the venue, knowing that we have a lot more room to play with as far as what we’re giving the system. We’ve received compliments on the clarity of our PA announcer, and now when the opening video plays and the sound booms, the fans really know it’s game time!”

For Alpha Video’s Jeff Volk, client satisfaction is a consistent result when partnering with Meyer Sound:

“Everything we do with them is a great experience,” he says. “Not only do they make great products, they back them with great engineering and great support. We couldn’t be happier with this project or the others we’re working on.”

Alpha Video’s complete overhaul of systems in the arena also included a complete network infrastructure upgrade on 10 GB fibre optic with fully redundant topology, new back-of-house systems, and new DSP and control systems. Also new are the two Yamaha consoles, with a QL5 at FOH and a QL1 at scoreboard control.