Musical theatre is always a challenge from an audio perspective: plenty of cues, a ton of I/O, masses of RF, and lots of bodies on stage. But here’s the thing: 40-45 isn’t showing in a theatre. Equally, there is no stage or PA system. Instead, this unique production is set in a bespoke, expansive pop-up just outside of Brussels with a 70m-wide blank canvas area, where the 1,600-strong audience, like the show’s 50 cast members, is constantly moving – and listening entirely on headphones.

This is musical theatre with a twist, and some. 40-45 is a story of love and loss, centring around a family torn by religion and war during the German invasion of Antwerp in 1940. The ever-changing set (there are about 15 main scenes) is brought to life – and, at times, death - by a series of stunning LED screens, which act as glorious, harrowing, and exciting backdrops: there are RAF Spitfires, German motorbikes, resistance shoot-outs, and celebratory drinks in a Belgian bar. It’s the height of true interactivity.

40-45 provides an immersive experience from start to finish, where the audio quite literally moves around your head, and the audience quite literally rolls about in tribunes of 200 at a time, each tribune moving individually, with the occasional low-end rumble coming from down below courtesy of three subwoofers. At the core of the audio is a DiGiCo SD7T console with expander, running Quantum 7.

“No other console on the market could handle this show; the automation system, and the functionality of the DiGiCo Theatre software is worlds apart from the competition,” says sound operator for tonight’s show, Igor Dockx, from the technical area, which houses the DiGiCo setup. “It’s so much more capable, way easier to program, and more forgiving; and it allows you to make changes in real-time over multiple cues, which is a necessity here.”

There are always 20 to 25 actors ‘on stage’ at any one point – sometimes more – and many of these are singing, too. As a result, the SD7T expander is wholly dedicated to the 25-piece choir, with the main SD7T controlling the rest of the show.

“The idea is that the audience uses headphones, and the cast uses IEMs; the principles have a stereo mix each, and the choir members share a number of mixes, all of which are mono,” reveals Pieter Doms, 40-45’s main sound operator. “We are using all of the busses on the SD7T, so we’re running 140 channels total, and utilising 190 snapshots, as each show needs to be pretty much identical to the last. We then have 32 stereo mixes, and 33 mono auxes; we use at least one band of EQ on all of the principle cast members as a dynamic band to duck down [around the 3k mark] when they get really aggressive.”

The audio distribution system – designed by Amptec - was manufactured as OEM by Glensound: 800 bespoke headphone boxes, each with a built-in preamp, and 100% wireless; a stereo mix is sent to the receivers located on each audience tribune, and from there, audio is distributed to the Amptec dual-boxes, located between the audience seats.

“There are 1,600 sets of headphones in use, all of which are tested before every performance, and we have a 50-strong crew,” says Doms. “Because there are three official languages in Belgium, a live translator will often be brought in, and we can patch that audio direct to each and every seat if we need to thanks to the way the headphone system has been designed. It’s very flexible, and the headphone panning will always be accurate, depending on where your seat ends up in the arena.” 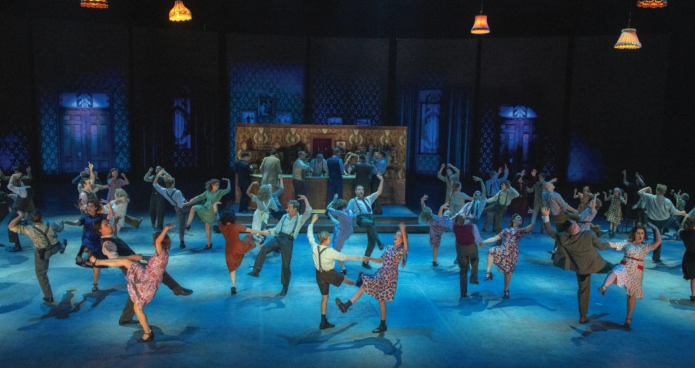 There are 1,600 sets of headphones in use, all of which are tested before every performance, and we have a 50-strong crew. Pieter Doms, Sound Operator.

QUANTUM OF SOLACE
What’s been a complete lifesaver for 40-45 is DiGiCo’s Quantum 7 engine. Thomas van Hoepen, who designed the show alongside Marc Luyckx, says efficiency was of paramount importance, and without Quantum, it simply wouldn’t have been doable.

“We tried making a show setup on an SD7, and ran out of channels quickly, especially due to all the Waves plugins we run via the Waves SoundGrid server,” van Hoepen explains. “Productions are getting bigger and bigger, and people want more and more; and shows like 40-45 are just the beginning of what productions are going to be in the future. You want people to have a musical experience, and that’s what we have been able to achieve. Suddenly, we’re not restricted anymore; our creative minds can go wider, as the desk now allows you to go wherever you want with the mix thanks to Quantum.”

And gone are the days of limitations in terms of how an operator can use compression and EQ from the SD7, adds Igor Dockx:

“If you wanted one actor to benefit from compression, then they all had to use the same compression – it was a general thing. Now with Quantum you can really choose per aux send, individually, who is listening to what; this is nodal processing, which is extremely powerful, so much more convenient, and totally versatile.”

The DiGiCo console is running at 96kHz, over an Optocore loop.

“We are using two Optocore DD4MR-FX engines running in parallel, with the second unit running as a backup. It is a very reliable transportation system, and its main advantage is that it’s not a network system, nor is it IP; it is a proprietary, plug-and-play system which, when configured once, will go on forever,” Pieter Doms explains. “We run it in a loop so that in a worst case scenario, if one cable breaks, all the audio can go everywhere; the loop is not closed anymore, but will still provide full functionality. You’re not dealing with IP, and you can set the Optocore system up in the desk, too, which is such a huge advantage. It’s the core of the system, basically.” 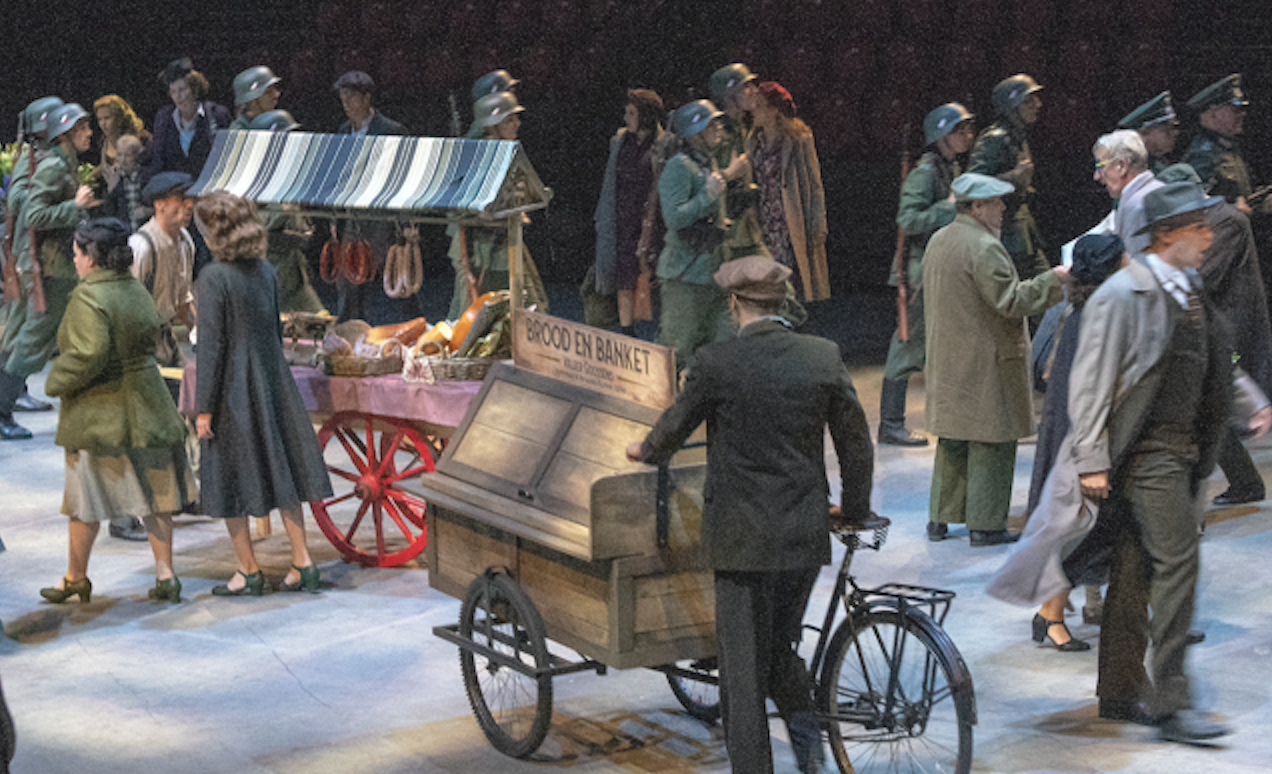 Shows like 40-45 are just the beginning of what productions are going to be in the future; you want people to have a musical experience, and that’s what we have been able to achieve. Thomas van Hoepen, Show Designer.

TECHNOLOGICALLY SPEAKING
The musical part of the show is coming from a pre-recorded orchestra, played back on a QLab system. A conductor, who triggers the QLab, conducts live for the singers, who can see him on the screens. Two QLab systems are running in parallel at all times: one for audio (A), and one for backup (B). The QLab is playing out audio, which is coming out on a Waves SoundGrid system, and being converted to standard MADI on a DiGiGrid MGB. The DiGiGrid then feeds the MADI into an Optocore DD4MR-FX, which is converting the BNC MADI to optical MADI, and the optical MADI is being added to all the other optical signals in the loop.

“So the QLab A and B [engines] are both available on the Optocore loop,” summarises Pieter Doms. “We have a number of macros, and everything in the building is redundant, so if something fails, one button cures it – it’s perfect redundancy throughout. And again, like the mics and actors, we try to stay digital from the source up to the console with no analogue conversions in between. All the cues are recalled from timecode via the QLab system, and the cues are opening all relevant channels at the right time, which means as operators, we are able to keep mixing and balancing every detail, since every dB can be heard on headphones.”

There are a number of challenges for this production, but the biggest is undoubtedly the fact everyone is experiencing the show on headphones, which means there is no sensation of acoustics - unless you have a Klang system.

“We use the Klang system for the audience instead of the actors. It was important to create a listening experience; this to give the audience a feeling of normality while wearing headphones,” Thomas van Hoepen explains. “Listening to headphones is one thing, but experiencing the feel of a musical is something totally different, so we had to somehow create a space for the listener. Klang allows you to have a distinction between front and back, and around your head.”

40-45 is putting on 10 or more sell-out shows each week - a great result for any new musical. But according to van Hoepen, keeping the whole cast happy is an even greater achievement:

“Because of the nodal processing, we can give each cast member exactly what they want, and keep in mind we have 140 player settings in the desk for all the cast roles, which changes every show. Furthermore, you have to keep those people satisfied with the mix you give them every time - and some people at first do an ensemble role, then on the next show they’re a principle role. So seeing them content the whole time is quite something.”

As a DiGiCo distributor, Amptec has been in contact with van Hoepen and Marc Luyckx for some time about the possibility of using an SD7 Quantum for 40-45; and as the configuration of the show started to become clear, the possiblity of using Quantum became more concrete.

“The ability to run the show on one surface during production, while at the same time having the ability to program the show with two engineers was one of the most important criteria for choosing Quantum,” declares Amptec’s David Liebens. “Because the technology is very new, DiGiCo, Amptec, and Pieter Begaerd’s company, Studio Haifax, who own the consoles, worked closely together to ensure that the sound engineers were able to program and configure the show smoothly.”

Before 40-45, my only real experience of a headphone-only event had been an elaborate silent disco at a music festival, which was more comical than anything else. This, however, was something special. After a couple of scenes, I genuinely forgot that I had headphones on – the cans were comfortable, clear, and rich in low end, complemented by Amptec’s very nicely designed preamp; and the immersive mix translated all the emotions with quite extraordinary precision.

Credit to the sound team from the ground up for capturing everything so well: from the intimate moments to the fraught ones; the nosedive of a Spitfire, to the fragile sound of a solo cellist. Quite incredible; and for me, uniquely immersive. The audio seemed to fill my headspace, and the reverbs felt otherworldly; as I moved, so did the audio, every time. I can’t recommend this production enough – if you’re anywhere near Brussels anytime soon, and are fortunate enough to be able to get hold of tickets, do not miss this show, at any cost.