All In A Row at Southwark Playhouse

Autism is a topic that perhaps isn’t conversed about in the mainstream as often as it should be, and with the cries of controversy that new play, All In A Row, has received, it’s perhaps understandable. Written by playwright, Alex Oates, who cared for autistic children for over 10 years as a social worker, it has been criticised for using a puppet as the autistic character in the play.

It’s evidence of a problem in society in which social issues are treated as taboo, and the criticisms of this play may frighten other writers from broaching the topic of autism in plays and other media for fears of backlash.

This negativity aside, it’s been handled very well by Southwark Playhouse, the venue for this play, pointing out in a statement that some of the physicality of the role and the adult language within the play would have made this role inappropriate for a child actor, autistic or not. And one of its actors, Charlie Brooks, has wisely said that she hopes people will come and experience the play first hand before passing judgement, rather than sitting at home and being angry about it. Hear, hear.

The main positive? All In A Row is an excellent play, and does a brilliant job as a conversation starter. Laurence, the non-verbal boy with autism who forms the centre of the story, at no point feels dehumanised by the theatrical tool of puppetry, which is largely thanks to the excellent puppeteering and voice acting from Hugh Purves, who worked on Solo: A Star Wars Story.

That’s not the only stellar work here — Charlie Brooks (Eastenders, Wired) is Laurence’s mother, Tamora, and also a tech entrepreneur whose income mostly comes from giving motivational talks, rather than shifting units. As we see in the play, she’s confident and assured in her public speaking, but needs several tall glasses of wine to cope at home. 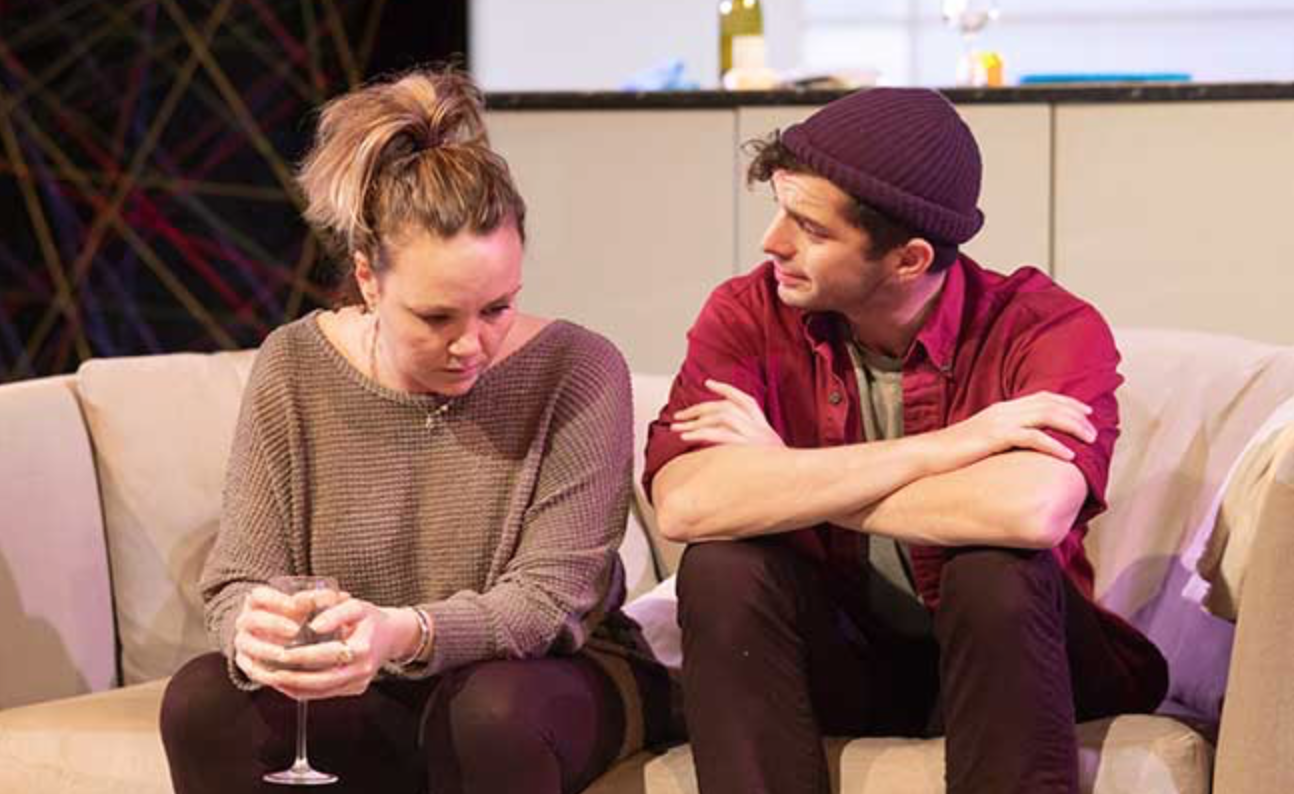 Michael Fox brings such empathy to his character, who is torn between clearly caring deeply for Laurence and his wellbeing, but wanting to be a million miles away from the arguments and drama.

Martin, the father, is given a fantastic blend of dry wit, good nature, but an inclination towards passive-aggression by Simon Lipkin (Avenue Q, Rock of Ages). And caught up in it all is social worker, Gary, played by Michael Fox (Dunkirk, Downton Abbey).

Fox, playing the young Gary who insists on wearing a beanie hat indoors, brings such empathy to this character who is torn between clearly caring deeply for Laurence and his wellbeing, but wanting to be a million miles away from the arguments and drama. Meanwhile, Lipkin brings a great comedy to Martin — but the challenging sense that while he’s all jokes on the surface, that this is a man being torn up on the inside. Similar from Brooks as Tamora, only she fully succeeds in putting forwards a woman who must wear a mask of confidence for work, but then utterly struggles to keep that mask on at home.

The audience’s seats surround the stage and set, giving the almost claustrophobic sense that we are the walls enclosing this family who are so close to breaking point. Laurence, who is clearly loved by his parents and his carer, has been reported to social services after one of his rare acts of aggression in a local park. It’s hard to imagine, as he and Gary share a pizza together while watching Finding Nemo.

When Martin and Tamora arrive home, the question of who made the call to social services permeates the play. It’s the parents’ last night as a family together with their son before he is taken to a special needs school, where they will be allowed to visit Laurence once a month. Meaning it’s Gary’s last shift as Laurence’s carer, and it’s a particularly rough one, as he gets caught up in the family arguments, which are very upsetting for Laurence.

It’s at times a difficult watch, but this play is equally uplifting. And with a busy audience on the night, it’s wonderful to see that All In A Row has risen above the all-too-easy criticisms.