Although best known for his work with Simply Red and The Stone Roses, for guitarist and composer Aziz Ibrahim, some of his proudest work has been using his solo projects to detail his family’s journey from Pakistan to Manchester and supporting various music education initiatives. He delves into what ‘the Asian blues’ means to him, being recognised by The Queen for his contributions to Great Britain’s economy, culture and the music industry, and why Celestion speakers have always been a part of his sound.

Born in Manchester to Pakistani parents, Ibrahim is known for his role and work as lead guitarist for Simply Red, The Stone Roses, Ian Brown, Paul Weller, Steven Wilson, Asia, Rebel MC and Hot Chocolate’s Errol Brown. Joining me on a Zoom call in early 2021, he suddenly remembers that he can use the title ‘Doctor’ these days.

“I've just remembered! I’ve got an honorary degree here from Salford University,” he clarifies, adding that he needn’t be addressed as such, and that simply, “fool” will do. You’ve got to love the Manc sense of humour; although he suddenly turns serious when reflecting on the car crash that was last year:

“It was pretty horrendous, but I'm an improviser of life in general. When I perform, I perform in that Frank Zappa-esque way where I never want a show to be the same; I never want a guitar solo to be the same, and I react to situations. There's two sides of me: there's a South Asian side of me, and there's the musician side of me – the improviser.

"South Asians are improvisers because their history comes from colonialism, and settling in this country comes from growing up and reacting to situations, whether it be racism or quick thinking on your feet just to survive or to fit in. Last year that intuition told me that I needed to make changes immediately.”

Ibrahim immediately set himself the task of brushing up on certain things, particularly when it came to embracing the digital world.

“I embraced it in the sense that I started to study gamers, YouTubers, influencers, digital influences, podcasters, anybody who was utilising that digital skill set, and I was learning those tricks of the trade,” he explains.

"I also looked at the music industry to see how that's changed in terms of a business model – record labels are still applying the old model, even though they are selling digitally and applying their rules and laws digitally, but they can't compete with the gamers and the content they put out every single day.”

Ibrahim has only had eyes for the guitar since he was seven, inspired by his teacher that would play while he and his classmates drank their free milk. He begged his parents for a guitar of his own for his birthday – no small feat on what his parents were earning at the time (“I grew up poor but happy,” – and when he finally got his hands on one, it was “the beginning of the end” as he puts it. 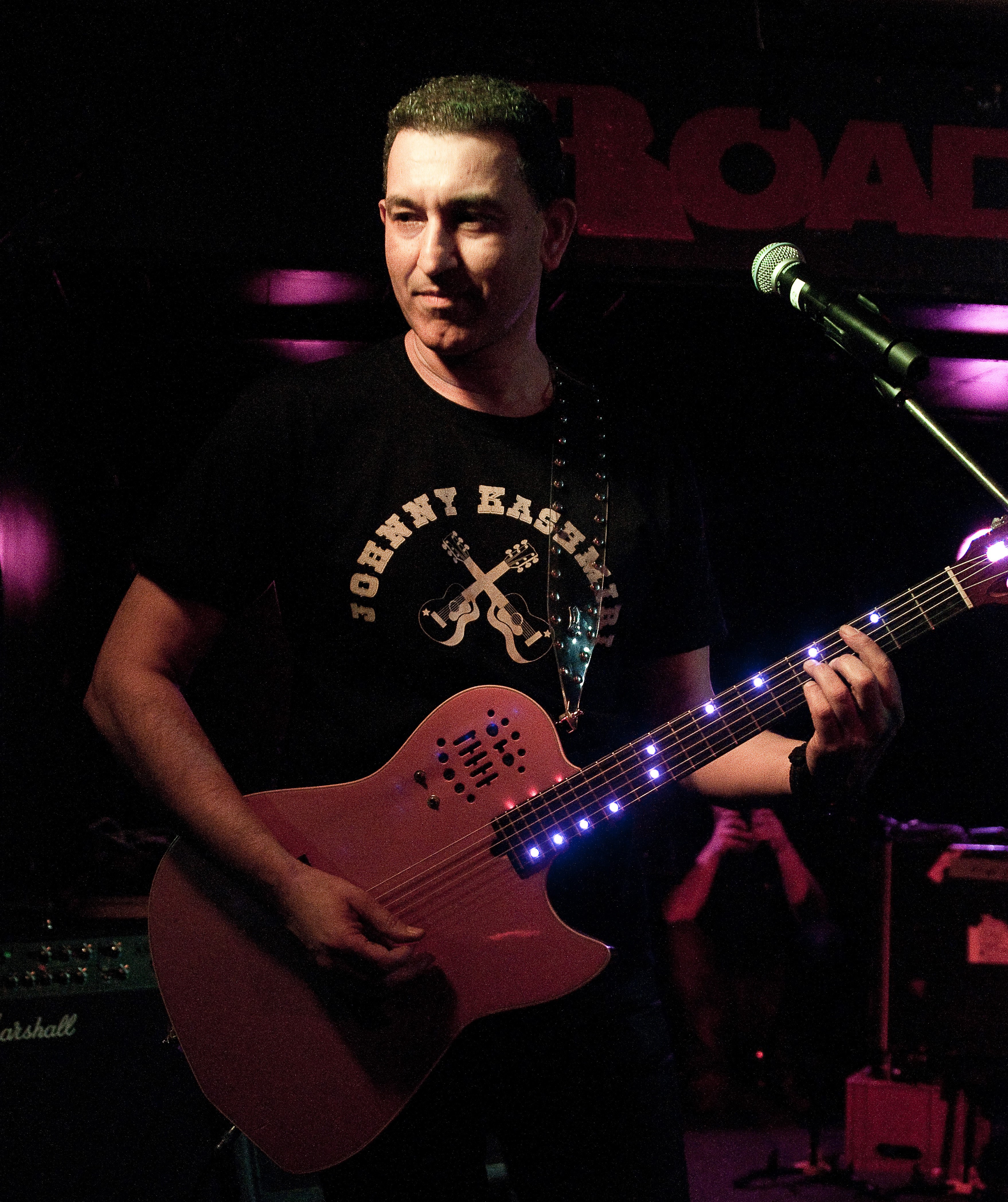 In reverse engineering myself, I realised that in my playing, I had to find my own identity and style that so many great players have.

As an adult, away from Simply Red and The Stone Roses, Ibrahim’s solo works include his acclaimed album Middle Road, telling the story of his family’s journey from Lahore to Longsight, and album Rusholme Rock with Tabla master Dalbir Singh Rattan – showcasing his unique blend of progressive rock and what he calls ‘Asian blues’.

Ibrahim recently completed his third successful Arts Council England project, contributing to the UK’s understanding of the musical instruments of South Asia and the influence they have on the second, third and fourth generation British South Asian creatives.

When it comes to the ‘Asian blues’, he says it’s all about identity:

“I found that I didn't know my own history, because the history I've learned in school was so biassed and so one-sided,” he states.

“You have to see both perspectives before you get the full picture. I needed to do that research, and it was horrifying, to say the least. It was a reality check – I realised that identity for me was a false identity, that it was an identity given to me. I realised that you have to almost reverse engineer yourself to know who you are and what you are.

"In reverse engineering myself, I realised that in my playing, I had to find my own identity and style that so many great players have. But even those players – the ‘great’ ones – have a culturally appropriated style.”

He hates the word ‘fusion’, but cannot deny that he has been heavily influenced by black culture due to growing up in a predominantly black community.

“I found that I was looking for my own identity; and my ear doesn't hear black and white notes, for a start. I can hear quarter tones and eighth tones straightaway, as I was brought up in that culture with the Bollywood films that my mother and father used to like. But at the same time, I was a rocker, and I wanted freedom of expression.

"The guitar is a symbol of rebellion, and I want it to be loud, because I've been quiet all my life and have this idea of the suppression I should feel inhibited by when it comes to cultural, religious, peer and community pressures.

“So many things prevent me from being the person I want to be, so the ‘Asian blues’ is me creating my own genre. I felt that the blues was my music. It’s about tragedy and sadness, and when I look at my own culture, we have our own tragedy – our own story of 400 years of colonial rule.”

All of these factors and influences play a role in his guitar playing, and Ibrahim is proud that he’s managed to craft his own musical identity within a world of mainstream music.

“I can’t cut out what is me already – I'm not a session player. I used to be in the early days, but I changed because I realised that I didn't want to be playing what people were paying me money for – I want to play the way that I naturally play, because that's what I've learned from the greatest bands in Britain. To play the way you naturally play is the best way, and is the most influential in terms of how you inspire other people.

“So the playing is always me, even when I was playing with The Stone Roses,” he points out. “I could have ironed out every nuance of me and played it as John Squire, but I'll never be John Squire, and John Squire will never be me.” 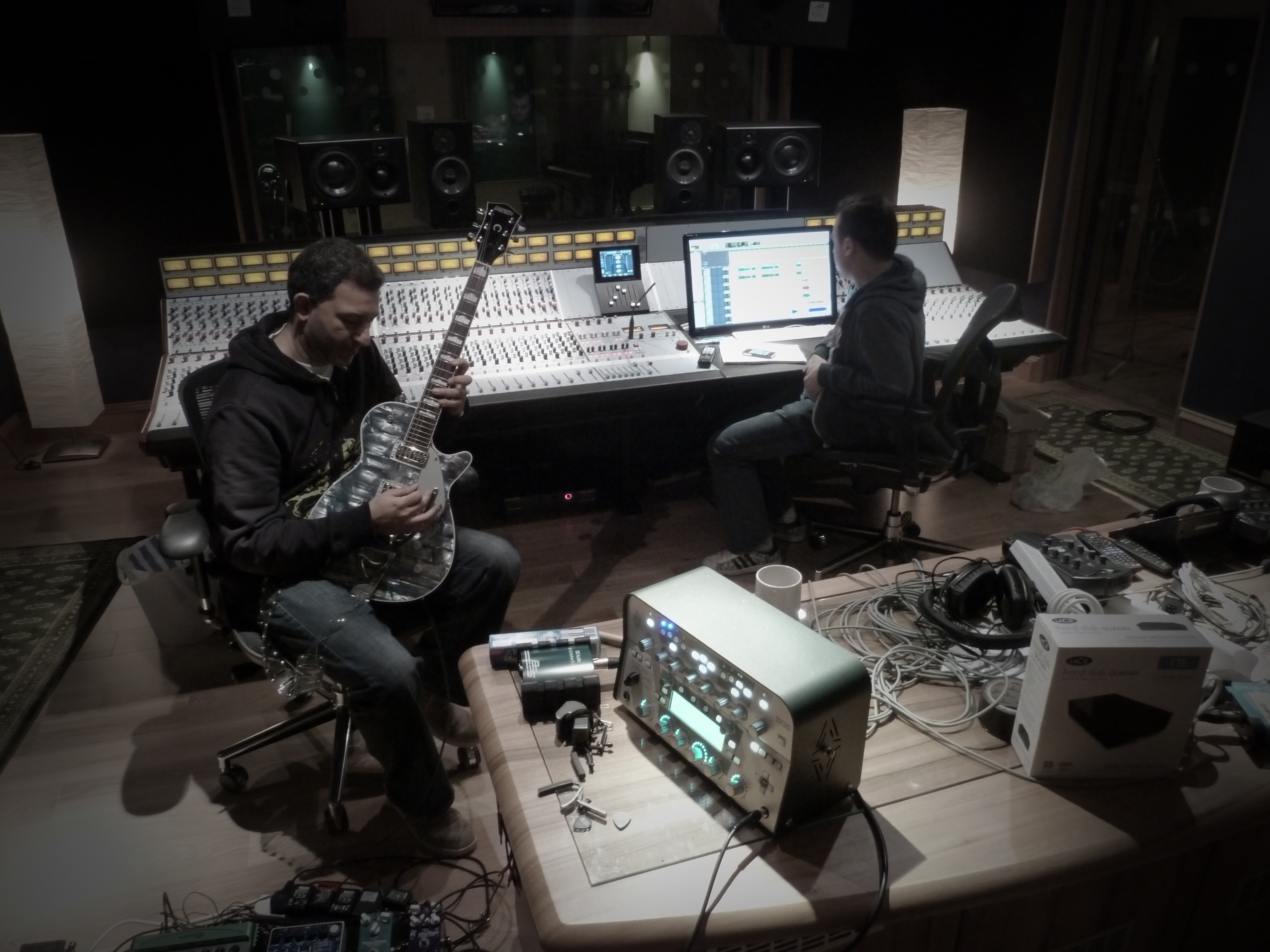 When it comes to drawing from British and American music culture, Ibrahim says it’s all about the attitude and the freedom that comes from sex, drugs and rock and roll.

“And I’m sober as a judge! I’m a good Muslim boy, and that inhibition prevents me from being disrespectful to my parents or to my peers, and yet, in the rock and roll industry, you throw all those things away, and that's free. I just love that beauty within that freedom of expression, and that's all I'm trying to achieve. I can't do that if I'm being confined by people.”

His efforts haven't gone unnoticed: Queen Elizabeth II recognised Ibrahim’s contributions to Great Britain’s economy, culture and the music industry in a ceremony at Buckingham Palace in 2005 along with Brian May, Jeff Beck and the Bee Gees.

“And the late, great Jim Marshall of Marshall amplification, who supported me for decades and decades,” he points out.

“I suppose they wanted to show a relationship between the Muslims of the United Kingdom and how we fit into the country and what our point of view is, and sharing that perspective with people abroad who have a picture of bowler hats and brollies. A British, Pakistani Muslim rock star is breaking that perception, I suppose!”

He adds that he of course was honoured to be there lined up with Brian May, Jeff Beck, Jimmy Page and the likes of Eric Clapton.

“They were all looking at me like, ‘who's he?’ It was really funny because they didn’t know who I was, but I knew plenty about them! But the fact I was there says something – that it’s not all just about white rock and roll.”

The British Council selected Ibrahim to tour and lecture in Libya, Syria, Tunisia, Morocco, Jerusalem, India, Pakistan and Bangladesh for several years, performing live and delivering lectures to young people and students from universities and colleges. Having avoided Pakistan since he was a child out of fear of an arranged marriage, visiting the country had a profound effect on him:

“You've dishonoured the family if you turn somebody down, but I was only young at that time,” he reflects. “Fast forward to 2003 and here I am touring Pakistan, and all these relatives were coming to see me – it was mind blowing. I'm rocking out and talking to people and sharing, but then I've got this affinity...I was in tears. It chokes me up now thinking of how close I felt,” he says, pausing for a few moments.

“I discovered a part of me I never even knew about, and brought that home with me.”

The guitar is a symbol of rebellion, and I want it to be loud, because I've been quiet all my life.

Ibrahim says he’s used Celestion since “the beginning of time”, and his go-tos over the years have included Celestion Blues, Golds, Greenbacks, Creambacks, Neodymiums, Anniversary 65s and 75s and Vintage 30s, which are the first ones he ever used back in the days when all he could afford was a cheap amp.

“It was around the ‘90s that I started to understand that certain cabinets or combos will give me a certain sound. I had a Blackstar Artisan 30 amp and it had Celestion Blues in it. I realised the difference between Ceramics and Alnico magnets, and that's really when it set me off. I found that I was drawn to either one for a specific sound. When I first heard those Alnico Blues, I thought, ‘Wow! Listen to the way that changes!’”

When he discovered Greenbacks, he found they suited him when he needed a bit more power but still wanted that Alnico magnet response, although by then he’d also discovered Celestion Golds, which quickly became another favourite:

“I found that the Gold was the one I was drawn to, and now the new Creams as well,” he adds.

“It comes down to the instrument for me. I haven't strayed much from the Alnico Gold and the Creambacks, although in all honesty, I use them all! They all have a varying roll off at certain points within the frequency spectrum. I do seem to come back to the Alnico Gold though…"