Jack Goodman: The Art Of Flight

When it comes to wireless, Jack Goodman gives the phrase “on air” a whole new meaning. The sound engineer explains how he captured the audio for a performance in a hot air balloon, and for a rapper who jumped out of a plane.

When sound engineer Jack Goodman was first approached about capturing the audio for rapper and singer Dominic Fike, who planned to jump out of a plane to reveal his new album What Could Possibly Go Wrong – he had to admit that he was skeptical:

“I told them to keep their expectations pretty low as far as how long we'd be able to capture this kid falling,” he says, pointing out that once mid-skydive, there is no possible way to make any adjustments.

“I was told we could have one chance to get this, so I told the director that I would figure something out. My biggest concern was the wind impact on the mic; I was really worried about whether we'd be able to hear anything outside of the wind blowing against his chest.”

After discussing the shoot with the rental team at Trew Audio in L.A., it was clear Fike would need a recorder on his body.

“It needed to hold onto time code once we’d jam-synced it,” he notes, adding a compact solution would also be ideal. Recording broadcast WAV files to a MicroSD card at 24-bit/48kHz resolution, a Lectrosonics MTCR ticked all these boxes for Goodman:

“The wireless was basically for everything except when he’s falling,” he clarifies. “For that, we needed to capture anything that he said as well as ambient sounds like the wind and the chute opening. Sound from a GoPro was not going to give us that vibe. We taped up Dominic with a Sanken COS-11D lav mic, which fed both the MTCR and his transmitter.” 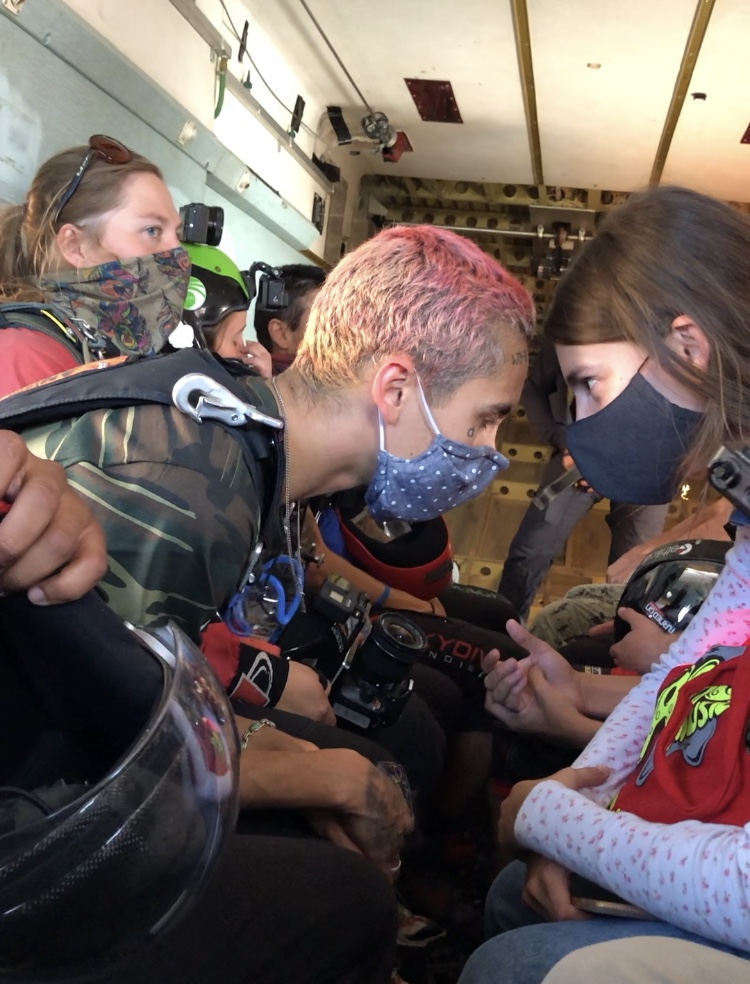 I was told we could have one chance to get this, so I told the director that I would figure something out.

There are no retakes on a skydive, and the situation is the opposite of having any control over one’s sonic environment, however the MTCR’s split recording mode prepared the team for this:

“It records two tracks at once – one with 18dB less gain,” he explains. “When Dominic jumped, I didn’t know how loud he would scream, or how loud the parachute would sound when it opened. I didn’t know what to expect, and we only had one chance. So, between those two tracks, I knew that I’d have material that worked in post no matter what. That feature was essential for us being able to do this shoot at all.”

“I’m mainly a post mixer, so good time code is important. We jam-synced the MTCR, my Sound Devices 633, and cameras from a Betso Box – and the MTCR must have run three hours total. Lectrosonics recorders are more stable holding on to jammed time code than their major competitors.”

Goodman notes that ironically, once the parachute opened, it was actually eerily quiet:

“My biggest concern was losing that mic for that part, or that it would move from its position and you would hear clothing rustling,” he explains. “When a parachute opens, you move kind of slow, so I knew that's when he was going to be talking the most, so I used a lot of medical grade tape for that.”

The results exceeded Goodman’s expectations, and he was particularly surprised at the range:

“In a good way!” he clarifies. “I heard him scream for about 30 yards, but the signal didn’t cut until over 100. It was perfect – I couldn't have expected it to be better. Of course, all that audio was still going into the MTCR. I was surprised that nothing clipped. At any rate, I was able to assemble everything from his lav into this hyper-real moment.”

Goodman was on the jet during the event in order to closely monitor the sound, and on a whim, he decided to skydive out of the plane too:

“Watching them all go out was pretty intense – you could hear the person in front of you fall and then whip away and you could see them go,” he recalls.

“I checked all the audio was perfect, and I knew we weren’t going to do this again, so I asked the producers if I could jump out of the plane too. It was intense! That was one of the trippiest feelings ever because you step off and there's nothing to step on to. You really feel that fall for the first 15 seconds, and then you reach terminal velocity where you're going so fast that you don't feel like you're falling anymore…”

Another recent assignment saw Goodman take to the skies again for a segment for The Tonight Show Starring Jimmy Fallon, in which musical guest Trevor Daniel took off in a hot air balloon mid-performance.

As with the skydive project, Goodman needed to capture audio before, after and during Daniel’s ascent – with no interruptions.

“We only had one take, and the production was like, ‘don’t blow it!’ Not only did we want that audio for post, but we needed it for the monitors of the musicians on the ground, which included a string quartet. Midway through the song, Trevor gets in the balloon and goes up, up, up,” he recalls.

“It was ridiculous,” he laughs. “Plus it was tricky because the rapper needed to hear the string quartet on the ground, and the string quartet needed to hear him in the hot air balloon, so there would be a lot of cross communication with signals, and if the feed got lost on either end then it'd be out of sync. Also, we only had one or two chances for it to take off because if the wind is blowing the wrong direction, they just can't use it. I learned a lot about hot air balloons…”

Adding more pressure was the fact that they would be flying above a large vineyard:

“They were saying if they land on someone's wine vineyard plants by mistake, they have to pay for every single wine bottle that could have been produced – at full market price. One little mistake could turn into a $50,000 issue, so I was definitely nervous! But if you're not nervous going into a job, I think something's wrong.”

For the skydiving project, Goodman turned to the Lectrosonics MTCR miniature time code recorder to supplement his kit of UCR411a receivers paired with legacy UM400a transmitters, whereas on The Tonight Show, seamless recording of Daniel’s performance was accomplished with an HMa plug-on transmitter and wideband Venue2 receiver.

“Our biggest concern was losing reception to that hot air balloon and then him not hearing us, and then them having to try and land this thing to take off again. There really wasn't an option to do that, though: the producers were clear with it being one shot. So we doubled down on antennas.”