Katie Tavini: Learning From The Master

Katie Tavini was one of only a few women nominated at this year’s MPG Awards, but is excited to let her work, not her gender, do the talking.

“I've only done two filmed interviews ever, and the first one was a fucking car crash,” admits an upbeat Katie Tavini as we set up for her interview about being nominated for MPG’s Mastering Engineer Of The Year.

“After that first one, the people interviewing me were like, ‘I don't see why women-only things have to be a thing,’ and then they went on a big anti-feminist rant. It doesn't matter that it's opportunities, it's that no one was giving [women] them!”

Women being fairly represented at industry events for the arts is a subject fraught with tension, with high profile female actors drawing attention to the lack of female nominees at the Oscars and BAFTA ceremonies in recent years (shout out to Natalie Portman for her all-male nominees dig), while it was also noted that there were no female nominees in the producer categories at the Grammy Awards this year. Is it just that men happened to be better in their respective categories on those occasions; are women not as drawn to these lines of work? Or are women not given the same opportunities?

This year, Tavini was one of three women nominated across the MPG Award engineering and production categories, and has her own thoughts on the matter:

“I go to mixed events and people think I'm there as someone's girlfriend,” she says, shaking her head. “It’s tough because there are a lot of amazing women in this industry, but there aren’t usually that many women nominated in the categories. But it goes in peaks and troughs: one year you'll have loads of women nominated, like a few years ago whenso many women won awards, and it was really amazing. This year, I guess people have just got their heads down and are cracking on with work. When there's such a huge divide, you're always going to have a bit of a gap there. And because there's so many more men than women in the industry, if women were to get shortlisted every year, they'd be the same ones!”

Tavini acknowledges that it’s an incredible opportunity to be recognised for an award, but that it should be for good quality work, regardless of gender:

Fascinated by sound from a young age, Tavini remembers listening to her dad’s vinyl collection and being intrigued by the intricacies of a stereo mix.

“I noticed that some different sounds were coming out of each speaker, and I was like, ‘what the fuck? That's so cool! I want to do that’. Obviously, I didn't know what it was at the time, but as I got older I took more of an interest in studying audio. I nerded out! I used to borrow books from the library that had massive lists of all of the Midi notes and numbers, and I used to sit in my bedroom making music.” 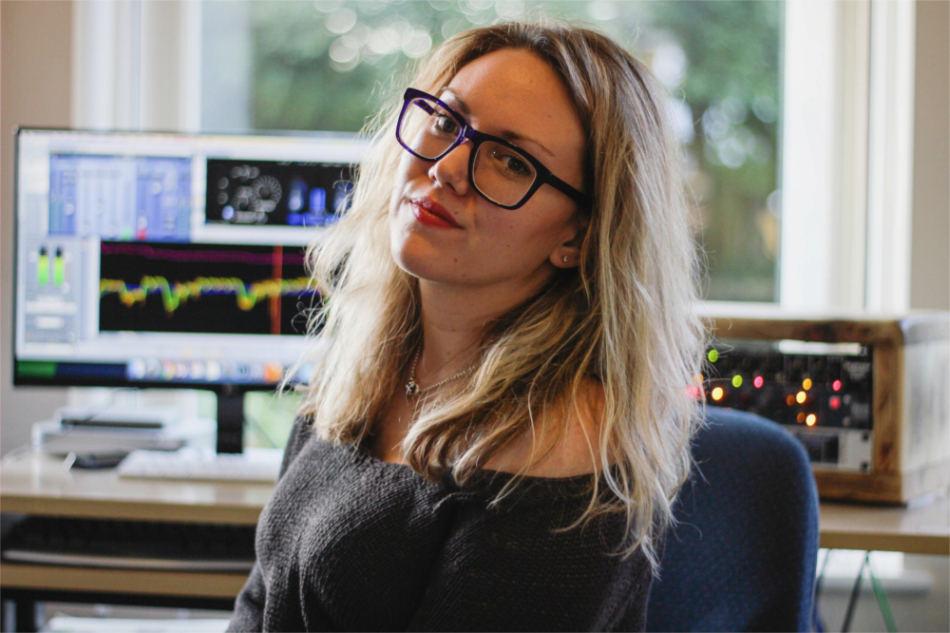 Tavini plays the violin, which was useful for learning musical theory, then went on to study music at university, which really opened her eyes to the world of audio engineering. What she thought would be some casual work experience at Manchester’s Limefield Studio then turned out to be her first job in engineering.

“It was a proper studio job,” she remembers, smiling. “John Ellis, who owns the studio is an absolute next-level creative genius. And Bill Leader, who produced from there, is such an amazing producer – and he really gets people. Watching him work and engineering for him was such an amazing opportunity. He taught me so much stuff; he's been an engineer and a producer for his whole working life, and I think he was 80 the first year that I started working there. He has so much knowledge to share; I wouldn't be doing this now if it wasn't for that.”

A piece of advice changed everything for Tavini: “I was looking to improve my mixes,” she recalls. “Someone told me that if I wanted to do that I should learn to master. Whether it was good advice or not, I took it. I loved what I discovered and never looked back. Plus, I've got a short attention span – I can't be doing with half a day of listening to one drum sound,” she laughs.

Tavini then started using tracks from the studios she was working with and attempted to master them at home, doing – in her own words – “a really, really bad job”. She then tried to match them up and compare them to the professional masters that came back.

“I think because I had done a lot of critical listening in my degree, especially because it was more classical music-based, this really helped me analyse the proper masters and work out why mine did not sound anything like them!”

After a lot of practicing, someone approached Tavini to master something – a job she took on by warning them in advance.

“I said alright, but don't use it if it's shit, please, for both of our sakes! But they really liked it and ended up using it, and then they asked me to master something else, which was Sonic Boom Six's self titled album. That did quite well on the punk scene, and I started getting more work off the back of that, which was amazing,” she says, humbly. “So it’s a really long winded way of saying, I got into this by a happy accident.”

However, going from engineering to mastering wasn’t smooth sailing.

“It wasn't easy at all,” she recalls. “There are so many more factors involved, from actually mastering the track, and knowing how to set up a mastering room is still a learning curve. There's the whole building of your studio, your equipment, and also building up your tastes, because that's really, really important. Listening to as much music as possible is the only way you can get really good at mastering. I've still got a long way to go.” 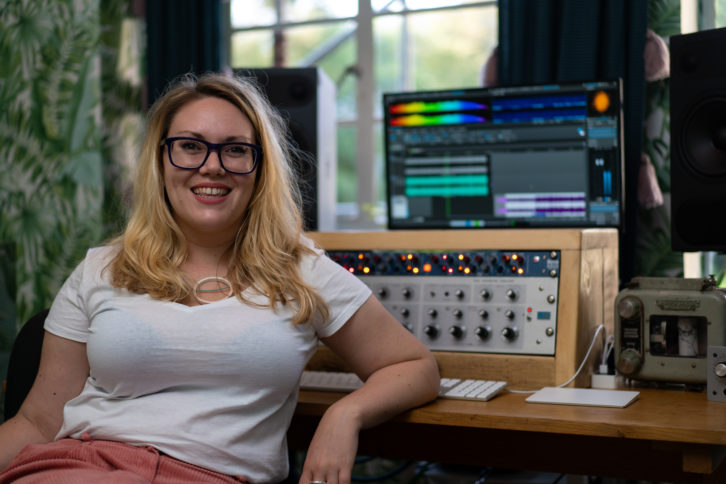 I was looking to improve my mixes, and someone told me that if I wanted to do that I should learn to master. Whether it was good advice or not, I took it. I loved what I discovered and never looked back!

Tavini’s nomination for MPG Mastering Engineer Of The Year came as a surprise to her when happening to come across Headliner’s article announcing the nominees.

“I've been a member of MPG since 2011, so to be nominated was amazing, because it’s all my colleagues in the music industry. When I started out, I was based in Manchester and it just felt like the whole music industry was London-based. It’s not really the case now, because social media is so big and it's a lot easier for people to connect. The MPG has been really welcoming and supportive of me, and to be nominated is amazing. Just being shortlisted has been pretty life changing, and I'm very grateful. It’s a great night for celebrating the industry and the things that have been achieved in the past year, as well as actually hanging out. Because when you're in this industry, you don't really get to see people very often because you're all working at different studios or in different cities.”

When compared to its more glamorous sound engineering cousin, there is a misconception that mastering can be a sterile art.

“I think there's this illusion around mastering that it's some kind of wizardry, which it's just not,” she asserts. “There’s quite a lot of admin involved in mastering, and all of that has to have metadata embedded into it – you've got a run off all your different formats like EDP, or vinyl sides. So, while there is quite a lot of organisational work, which can be the dry bit, the audio processing can be really creative. There's never anything that's ever the same, because every track that comes in has been recorded in a different place, by different people, with different tastes, and with a producer that's got a different vision. So it's how to use the studio to get the best out of that.”

When it comes to mastering practices, less is more for Tavini:

“Because it’s so easy to ruin something!” she stresses. “If you're working with a producer and you send a mixed master, unless they've said ‘we're not entirely happy with the sound of it,’ chances are, they're happy with the sound of it, and that's how they want it to sound. So really, you want to keep that sound. Whereas, when I started mastering, I was like, ‘how do I make it sound more like this?’ And actually, that's not the point of mastering, because, what's the point in making something sound like something else? Everything is just going to end up sounding the same. So I think the real beauty and subtlety is in the differences between projects.”

Tavini’s jungle-themed studio is based around monitoring:

“That’s the most important bit,” she says. “I’ve got PMC twotwo.6 active monitors which are amazing. I got those last year when I moved into my London studio, because the room was bigger than my studio was in Manchester and I needed something with a bit more power. Since upgrading to those, I think my mastering has really, really improved. I’ve also got Bowers & Wilkins 702s, which I use at the very start of a project just to get an overall vibe of whatever I'm working on. And then I use those last as a check. So the two are very different sounding, but they complement each other quite nicely.”

The rest of the studio is what Tavini calls a “hybrid setup” – it’s not your typical mastering studio. “I work for myself and I've built up my mastering work, and I’ve had to pay rent, travel and you know – eat – alongside mastering and working and building a client base. So there was absolutely no way in hell I would be able to afford the really expensive stuff.”

To get around this, for the last three years Tavini has been building up an arsenal of outboard gear.

“So it's the opposite from your typical mastering studio,” she says, pointing out that she loves Sonnox plugins. “They are amazing! I especially like the Sonnox Limiter. The quality of plugins now compared to 10 years ago is insane. I also like the Brainworx Digital mid/side equaliser plugin, because sometimes you get mixes which just feel a little bit too dense or scrunched up, so you can really spread stuff out using that.”

Regardless of who wins on the night, Tavini is already looking forward to some exciting projects this year, although she isn’t allowed to talk about them just yet.

“There is so much that I'm excited about!” she enthuses. “The hardest part is that I can't talk about a lot of it, but I'm sure that's the case with everyone. I can say that I’ll be working with some artists that I really love. I’m just looking forward to smashing it this year, because...well...I just want to do it!” she grins.