Matthew Herbert: Out Of Left Field

It’s not every day that an MPG Award nominee reveals that their inspiration to create music is fuelled by contempt for Micheal Gove, or to have a piece of work that centres around recording the sounds of a pig’s life – from birth, to plate. Headliner meets musician and producer Matthew Herbert to talk music-making, our understanding of the universe, and striving for originality.

Inside London’s Strongroom Studios, Headliner is waiting to meet a man of many names. Should we address him as Herbert, Doctor Rockit, Radio Boy, Mr Vertigo, Transformer, or Wishmountain? These days, he’s quite happy to be known simply as Matthew Herbert.

Up for Re-mixer Of The Year at this year’s MPG Awards, Herbert has not stuck to his lane in electronic music production over the years, nor to traditional sources of inspiration. Starting out in the industry in the ‘80s, Herbert went on to achieve success in mainstream remixing for artists such as Moloko, Ennio Morricone, Quincy Jones, PUZZLE, Björk, REM, Perry Farrell, Serge Gainsbourg, Yoko Ono, John Cale, The Avalanches and Cornelius. So far, so normal.

But this is not where his interests truly lie; Herbert wants to delve deeper – being much more interested in speaking out about important issues ignored by the media. Herbert seeks to challenge the norm, have the world open its eyes to the bigger issues, and question our political landscape. This is where his creative side really comes alive – his unique projects blurring the lines between music production and experimental, surrealist art.

In 1998, Herbert issued Around the House, which mixed dance beats, sounds generated by everyday kitchen objects, and vocals, followed by Bodily Functions in 2001, which featured sounds generated by manipulating human hair and skin – as well as internal bodily organs. Plat du Jour was his next offering – a record made entirely from the sounds of objects and situations in the food chain, before serving up his most controversial piece to date – One Pig, where he recorded the life cycle of a farmed pig from birth, to the dinner plate.

A love of sampling was sparked when Herbert was a boy:

“I had a Casio FZ-1 sampler/synthesizer keyboard, and I used it to chop up songs off the radio,” he remembers. “This got boring very quickly; in the space of about half an hour I felt like I was shopping – just consuming and taking stuff that I didn't know the context of, or how it was made. I have no problem with that way of music-making, but for me, it didn't feel original. It felt like I was shuffling somebody else's ideas around.”

The turning point came later, when inspiration struck whilst he was eating an apple:

“I bit into an apple, and mic’d it up and plugged it into my computer. That was really transformative – if you slow down an apple crunch, you can hear the fibres pulling away from each other,” he enthuses. “I actually recorded one for a project recently, and it sounded like a tree coming down – so I’m really messing with the fabric and materials of time, and how we understand the universe.” 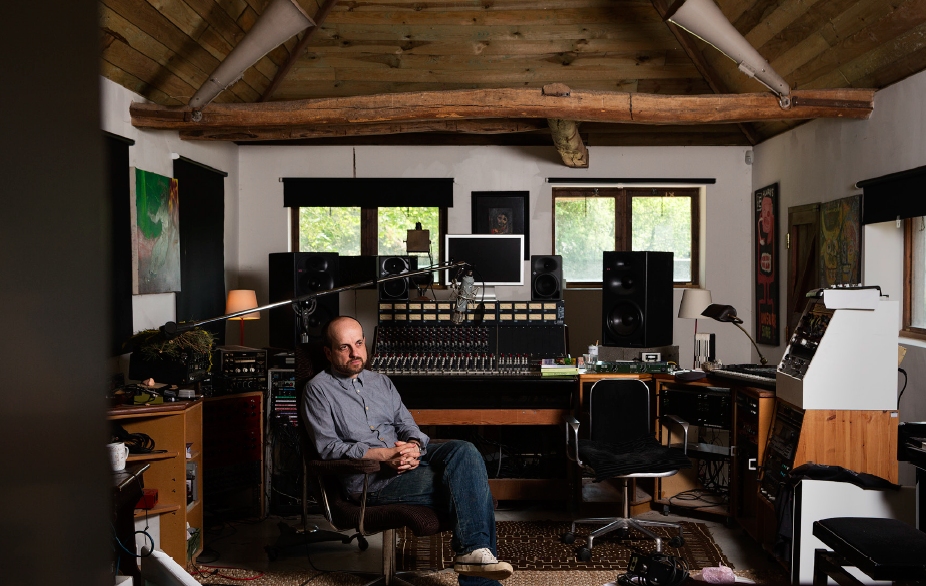 I recorded a pig being born and then followed that pig's life until it was killed, and then eaten. For me, that capacity for music to tell stories is an extremely revolutionary one. Matthew Herbert

From then on, everything was fair game for sampling, from washing machines, to kettles – to animals. “About 10 years later I realised that it could be about life and death as well,” he explains. “So I wanted to do the sound of something being born on legs, and the sound of dying, but that felt too difficult to do with a human – and strange territory. So I thought I could do it with an animal.”

It was at this point that Herbert decided that he would use a pig.

“They have a particular place in our society,” he continues. “We use them in everything, from orange juice, to ink, to paper, to clothes and food. Part of a pigs’ guts are used in the filtration system in milk, porcelain, bullets, medicines – and yet we treat them with a lot of contempt. So I recorded a pig being born and then followed that pig's life until it was killed, and then eaten. So you hear that whole journey from it being born, to someone wiping their plate clean at the end of it. For me, that capacity for music to tell stories is an extremely revolutionary one. And it's one that I think the music industry pretends hasn't happened – they’re picking up guitars and drums, whereas we could be making music out of NHS hospitals being in disarray, or Tory donors taking Russian money under the table...or a fruit bowl – whatever! I turn it into music, and it's totally liberating and extraordinary.”

For Herbert, originality and saying something new is key:

‘If I sit down at the piano and try and write a piece of original music, I'm up against about 10 to 15 million other people also sat at pianos trying to write something interesting at the same moment. Whereas, if I sit down and play the sound of a pig's body being chopped up into its component parts, I'm probably the only person doing that at that time,” he laughs. “So you kind of have a free, much more original little corner to begin with before you even make anything. A quest to be original feels like a good starting point.”

With such unusual projects under his belt, where does Herbert find his inspiration?

“Most of my inspiration comes from Michael Gove,” he deadpans. “Just the horror that comes out of the mouths of these people. I saw him on a programme and I had a physical reaction to it. What he was saying was mendacious, it wasn't appropriate. Also, with the climate crisis, we have a profound crisis of accountability and a crisis of trust, and meanwhile the dominant narrative in the media is making things worse, not better. We’re being lied to, and that's why I got into music – to change the world and to make it into a better place.”

Does Herbert think that the music industry is in crisis at the moment?

“It has become utterly complacent,” he nods. “And I think that we have to accept that we're part of the problem. We don't need any more love songs: no matter what the state of your relationship is, I should imagine there's probably several pieces of music that would cover that particular stage. So why do we need any more about it? We need to be doing some reflection; we can't just fly around the world to gigs because we want to, or because we've been asked. We need to be held accountable, and we need to be asking serious questions about ourselves: where do we fit as musicians? Right now music is just the soundtrack to consumption; everywhere you go, music is in shops so you can buy more stuff, saying ‘it's okay, the world's okay,’ and the world's not okay – things aren't going well.” 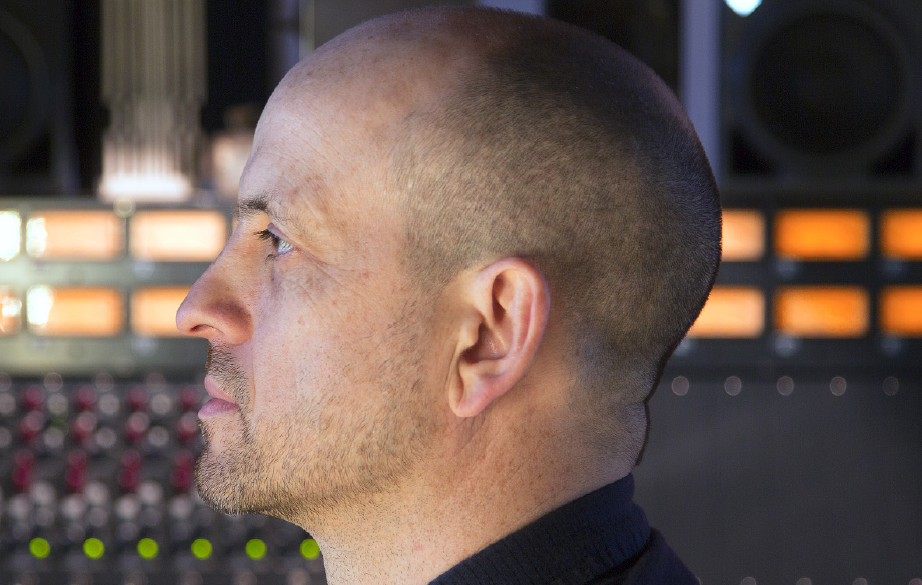 Most of my inspiration comes from Michael Gove – just the horror that comes out of the mouths of these people.

For his regular film and television work, Herbert is required to churn out a lot of work on short notice, which is where reliable, quick recall technology comes in, although he misses the analogue way of working.

“I spent a lot of money and invested a lot of time in a quest for really great-sounding analogue equipment,” he says. “I have a Neve desk, however the expectations now from people that you work with in the film and TV industry is instant recall. You have to be able to go back to a version that you had six weeks ago and be able to tweak it. So I haven't used my Neve desk properly in about 18 months, and that's a real shame for me. I have to do it all on the computer now. I wrote something like 600 pieces of music last year, and sometimes you need to be writing 10 to 12 new bits of music a day, and to be pretty much finished mixing as you go. So the capacity to use analogue equipment in this environment has vanished completely.

"I did a film score for a Syrian documentary recently, and I had to write two hour’s worth of orchestral music, have it approved by the director, sync it to picture, transcribe it, score it, print out the parts, record it with the musicians, mix it and deliver it in two weeks. The turnaround is incredibly quick now, but also the expectation is incredibly high from the people making it. If I were an artist and I had the time, then I would still be in the analogue world, but unfortunately, I’ve had to abandon it almost entirely.”

Herbert uses a Logic Pro DAW, and when it comes to plugins, he favours all things quirky. “Unfiltered Audio do some really odd things, and I like the odd stuff. That's what I like about the Plugin Alliance – they do some very precise emulation analogue equipment, but then they also do some bonkers stuff as well. I also like Sugar Bytes and Sinevibes for their odd things, and Waves’ Abbey Road collection.”

For monitors in his home studio, Herbert is using Klein+Hummel, although he notes that he changes all his equipment every three years. “I get rid of it all pretty much and start again, because as soon as you get comfortable, I think the work suffers as a result.”

When it comes to his MPG Award nomination – which Herbert clarifies is for his more traditional commercial remix work of late – he is both surprised and pleased to be recognised, although is humble when it comes to congratulating himself too much.

“I'm really pleased to be nominated – I’m very grateful for it. I really value [the MPG’s] support; it's made up of peers and friends of mine, so it's really nice to be noticed, and always nice to be nominated. I just want to talk about ideas really, and I am so grateful to be nominated for this, but as you can tell, I'm more motivated by ideas and politics,” he smiles.