Michael Bentt’s life has been nothing short of remarkable. A sensational amateur boxer whose career would encounter rollercoaster moments as soon as he turned pro: he was knocked out in his first professional bout, which put him at rock bottom. It took extraordinary mental strength to bounce back from that, but Bentt did just that, flooring Tommy Robinson with a formidable KO to become WBO World Champion some 10 fights later. This was 1993. A year on, he retired, after a near fatal loss to Herbie Hide. This time, Bentt’s first sensation was one of relief. We chat about the massive highs and unbearable lows that have made him the man he is today, and how the arts have allowed him to excel in all he does, most recently in the quite brilliant Neflix docu-series, Losers, which focuses on the mental health issues that surround professional sports people.

Michael Bentt never wanted to box. The British-born athlete was dragged into the sport by his father, and when he stepped into the ring to defend his title for the first time against the formidable Herbie Hide, something didn’t feel right. That fight cut deep, and post-bout, doctors insisted that one more punch could end Bentt’s life, let alone career.

The former fighter admits his first reaction was one of total relief – but boxing had taught him some key disciplines, which he would use to channel his true passions: writing, and acting. In the years that have followed, Michael Bentt has become a published writer, Hollywood actor, and off-Broadway theatre director. And perhaps coolest of all, he’s just featured in the quite brilliant Netflix original series, Losers, where he was able to tell his story. So where did it all go right?

“It’s been overwhelming, and a dream, really,” says Bentt, with a smile. “It’s surreal too, man! ”

Bentt is referring to Losers, in which he speaks out about his life in and out of boxing in the opening episode. It was Bentt’s friend, Thomas Hauser, author of Muhammad Ali: A Tribute to The Greatest, who provided him with this unique opportunity.

“Tom and I had lunch in New York a couple of years ago; he said ‘Michael, meet the writer, he is from Canada,’ and we talked about boxing, and life – the demons you have to overcome as a boxer, and so on,” explains Bentt. “A year later, he put me in touch with the Netflix crew. We had a discussion, and I said I would love to be a part of it. It was a very easy, and smooth process.”

I admire Bentt’s brutal honesty in Losers. It’s engaging, and heartbreaking viewing; at one point, Bentt reveals that he was so low, he literally had a loaded gun in his mouth.

“I couldn’t do it... I wanted to do it, but I couldn’t do it,” he says, point blank. “Boxers are extreme creatures, and also extremely sensitive people - that’s how we fight in the first place. Mike Tyson is a wound down system of nerves, but he is very, very sensitive. You have to have a place to come from to box.”

Losers sends a lot of messages, but one that stands out to me is mental health, and how talking about it can only be a good thing.

“One of the most important things I learnt as an actor was to tell the truth – on camera, or off camera,” Bentt says. “I started writing for a magazine in the 1990s, and all I knew to do was tell the truth; getting knocked out by Herbie Hide I am very honest about, and I am honest about all my experiences. I think as uncomfortable as it can be, we have a responsibility as people to talk about the tough times, and our inner demons.”

THE DOMINO EFFECT
Bentt tells me he wouldn’t ever have got out of that dark place if it wasn’t for the mentors that he ran into, or ‘searched for subconsciously’, as he puts it. In 2001, he landed a role in the Ali movie alongside Hollywood star, Will Smith, playing his opponent, Sonny Liston. That opportunity came from a chance meeting with renowned boxing writer, Bert Sugar, at an HBO boxing conference, where Bentt was initially offered a writing assignment.

“Bert said ‘Hey Michael, I want you to write for my magazine’. I’d written a few articles before, but he saw I had something, and again, he gave me a shot,” Bentt reveals. “It turned into me writing a couple of profile pieces on some boxers, but it ultimately led to me writing ‘Anatomy of a Knockout’ [for Sugar’s Fight Game mag], which movie director, Ron Shelton, then saw, which led to him calling me for the Ali film. It’s crazy, really, how it all happened.

“These people saw something, believed in me, and gave me a shot - even when I didn’t believe in myself at times. Sometimes I still get dark, I get the ‘oh, oh’ - that sandpaper, almost... [pauses] When that happens, I go to my computer and start writing. That’s my medication.”

Bentt tells me in no uncertain terms how his father quite literally forced him to box, yet he acknowledges that the sport has helped him to succeed in life in the long-term.

“I didn’t want to be a boxer, but I was spending time with some great people in my life who encouraged me to succeed,” Bentt reflects. “I am not beating Tommy Morrison without that; and I am never going to be the so called great amateur boxer I was without that. You have to have something to express, and that is true boxing.

“It has also given me such a great education. I was 19 years old, and I went to Moscow - that is a cultural education for me, and it saved my boxing career, travelling and meeting people. It’s like going to Harvard! [laughs]” 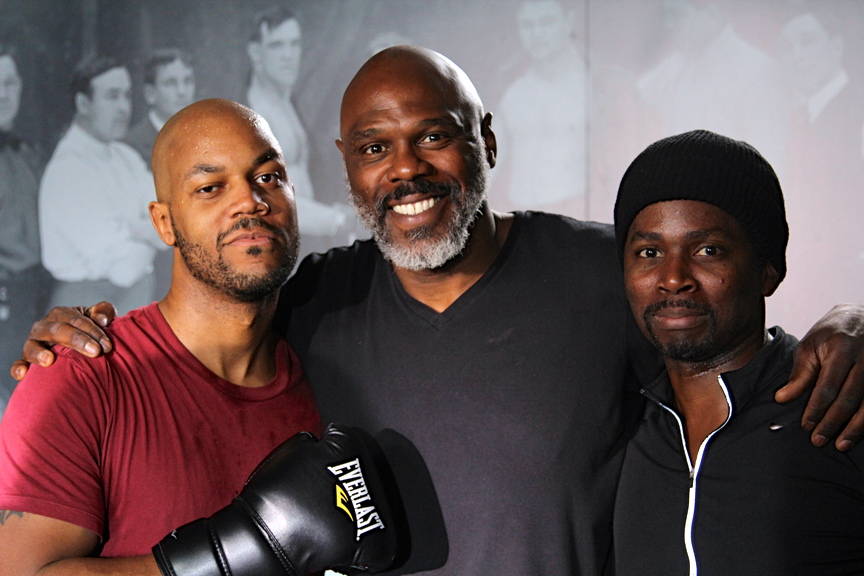 I think as uncomfortable as it can be, we have a responsibility as people to talk about the tough times, and our inner demons. Michael Bentt

After Bentt retired from boxing in 1994, he enrolled in Northampton College in Pennsylvania, to begin pursuing his true passions.

“I was doing occasional commentary for boxing, and I wanted to get a broader understanding of TV production, as I wanted to produce behind the scenes,” he explains. “I started to eat, sleep, and drink acting – just like I did boxing as an amateur. And when we apply ourselves to that degree, and don’t think about being judged, or worry how long it’ll take us to get somewhere, it really works.”

Bentt essentially applied the same values and dedication to a different art – and he hasn’t stopped doing it since. Skip to 2011, and he was directing an off-broadway theatre production.

“Yeah, man! I directed the boxing play, Kid Shamrock, in 2011 and 2013. It was very well received and acclaimed, and I was thrilled with it,” he enthuses. “It’s based on a true story: a 1970s fighter, Bobby Cassidy Snr., and his son, Bobby Cassidy Jnr. He called me up one day, I was living in LA – and he told me about the play, asked me to take a look at it.

“I had an audition that day, and I had to see my acting coach, and I gave him the play. He said ‘you have to direct this play, you know this world; not only do you know this world physically, but psychologically, as an actor.’ So I said I’d do it. Bobby flew me to New York, and we rehearsed for four to five weeks. We cast it, and we worked on it hard. Everyone was brilliant; they went for the jugular, man!

THE HARDEST PART
According to Bentt, it’s your own responsibility to extend a hand, or a kind word to somebody who’s going through a tough time, no matter how difficult that might seem.

“I think everyone should map out a course of their time for this,” he says. “Mental health is a beast, and I think we all have our issues with it; some of us just handle it better than others.

“If I am in pain, I’m gonna write about it, or am lucky enough to express it in a role - many of us can’t do that. But if I see a kid who’s looking low on a bus - we can all see that – then I am there. I have a 14-year-old son, and I give him this kind of advice every day. It’s important that we help where we can help.”

Music is also a release for Bentt, as well a constant source of inspiration.

“I listen to music every day; it helps me get through a lot of things,” he says. “As I was born in the UK, but mum and dad are Jamaican, my taste is pretty broad: I love Marvin Gaye, and Stevie Wonder, yet I also love Andrea Boccelli, you know? And I tell you this, the past few years I’ve got to know, and got into the music of [rapper] MF Grimm. I had no idea he was a genius – and what a story he has. His music is as just as inspirational to me as listening to Bob Marley or Marvin Gaye – it’s epic stuff.”

So life is good for Michael Bentt. And we at Headliner are delighted to hear it. Do check out Losers on Netflix – it’s well worth bingeing on.