Currently in its 11th iteration and dubbed ‘The International’, the annual eSports world championship tournament was hosted by Valve, the game’s developer, and is considered one of eSports’ biggest events. Sound designer and owner of post production and live events agency Aural Fixation, Jason Waggoner has served as the live audio sound designer and department lead for the tournament since 2018, with d&b consistently being the audio manufacturer of choice.

The d&b system is primarily focused on game sounds, announcer commentary and video playback in the arena, as well as supporting live entertainment elements when called for. While d&b has been part of the event for several years, Soundscape was specified just last year. But due to COVID, the 2021 tournament was cancelled at the last minute, so 2022 was the first time the audience was able to experience its sound capabilities in person.

For Valve, the game audio in the arena needed to sound as close as possible to what it would be like if the audience were wearing headphones or watching at home.

This production is really about rewarding fans for their loyalty with this unique immersive sound experience. Jason Waggoner

“Soundscape gave the audience not only a better overall experience but a more homogenous one to what they're used to,” commented Waggoner. “This audience is used to watching at home on Twitch and YouTube, probably on headphones, and so we needed to deliver something more akin to that experience but at the same time had all the excitement of a live show.”

As part of d&b’s ArrayCalc, Waggoner used d&b’s Soundscape Simulation software. The visualisation tool is designed to accurately model a Soundscape system’s real and perceived acoustical performance within a space. The En-Scene simulation tool allows d&b users to evaluate how the spatialisation created with a Soundscape system will be experienced, which helps audio technicians optimise system design early in a production’s planning phase.

“This feature allowed me to deploy the system in a non-traditional way, and have a lot of flexibility in how the content was delivered to the audience,” said Waggoner.

“The way Waggoner distributed the game sounds in Soundscape gave them a deeper and wider image than a traditional distribution, especially juxtaposed against our very forward “mono” vocal channel which was evenly distributed (also thanks to Soundscape) across all sources,” added Ian Davidson, FoH engineer at the tournament. “The result was a subtle, but very effective immersive experience.”

Waggoner’s audio team also complemented Soundscape with d&b V series and ArrayProcessing. One of the major challenges of the audio production of this competition is working to keep as much audio as possible off the stage itself. The show that happens on Twitch is the same show that happens in the arena, so if that sound is getting onto the stage and players can hear it, they may pick up something going on in a different part of the game which would potentially give them an unfair advantage. 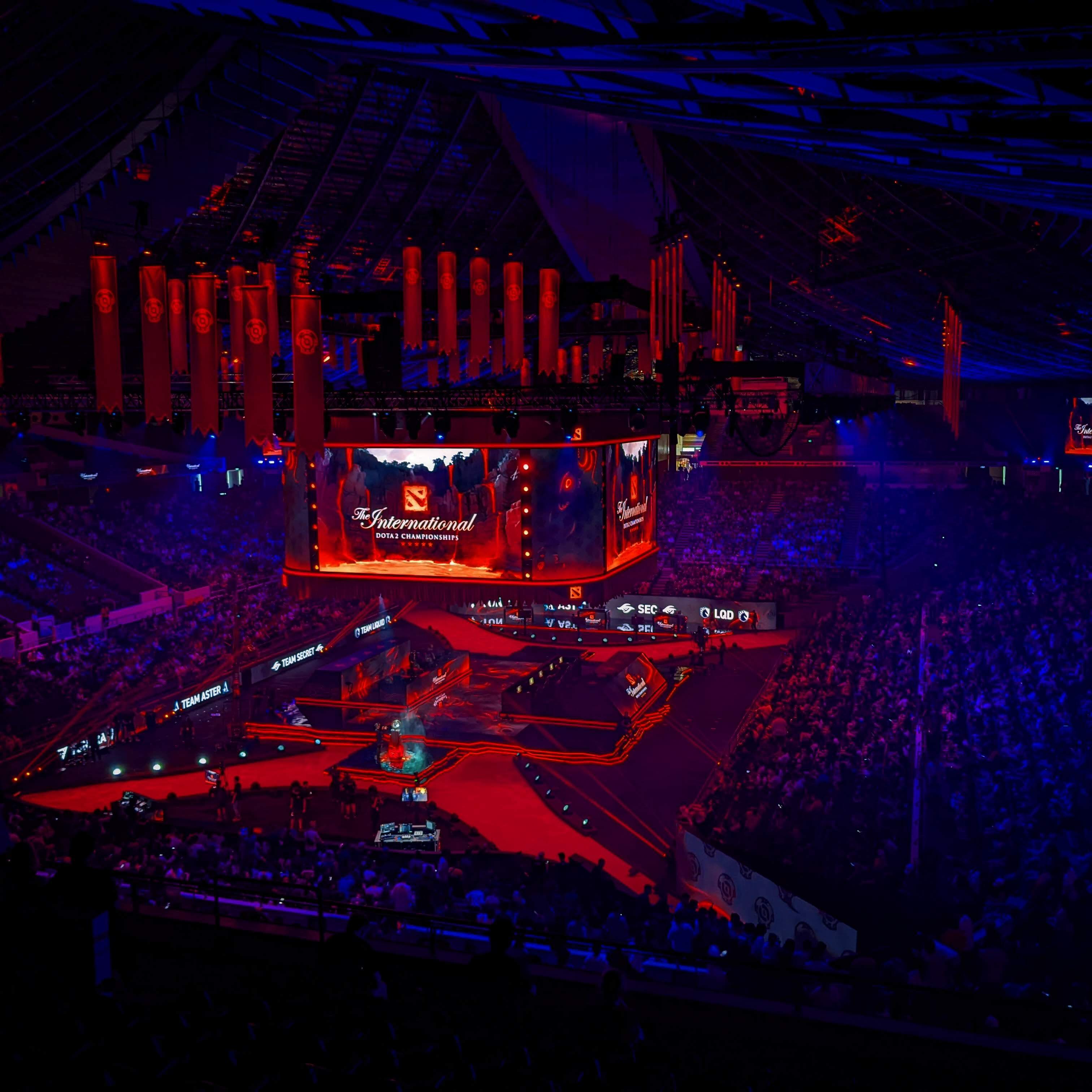 To help prevent that from happening, Waggoner says the pattern control and cardioid nature of the V series was critical to the system’s success in the arena.

Additionally, the team used ArrayProcessing, an optional software function within the d&b ArrayCalc simulation software. ArrayProcessing uses an optimisation algorithm to determine tailored filters helping control the behaviour of a d&b line array system arranged in a LRC configuration across an entire listening area within the 12,000-seat stadium.

“Being able to use ArrayProcessing is pretty crucial because of the even coverage that you get and the more consistent frequency response across the audience area. But it’s also very effective for something else unique to eSports: the play-by-play commentary is in the arena, not in a booth like they would be for a traditional sports broadcast,” explained Waggoner. “Using the cancellation functions within ArrayProcessing helps prevent as much extraneous audio as possible from echoing into the commentators’ headsets. That’s critical for broadcast.”

Waggoner mentioned that the audience, many of whom travelled from far and wide for the tournament, got to experience a show of epic proportions and audio quality.

“This production is really about rewarding fans for their loyalty with this unique immersive sound experience. Every year there's a lot of focus and a lot of energy put into the live production and trying to find ways to create an arena setup that is maybe a little bit beyond just a normal sports event.”