Monitor engineer Dave Rupsch opens up about life on the road with Katy Perry and the Red Hot Chili Peppers, why it's got to be a DiGiCo console at side stage, and how he came to be known as ‘Supa Dave’.

“I'm just starting my 20th year, and I had to update my resume recently,” remarks Rupsch. “I was like, ‘Holy cow!’ It all kind of stacks up after a while.”

Although the first eight years of his career saw him at the FOH position, these days Rupsch works as a monitor engineer.

“I look at a monitor engineer role as an honour,” he says. “It’s the audio version of a personal chef – somebody that is hired to look after all of the audio needs. You get everything ready for them so when they show up to the venue, they can be handed a microphone and go out on stage and feel comfortable performing to their fans.”

On moving from FOH to monitors, Rupsch says his preference gradually changed as he gained more experience:

“I started gravitating towards monitors and once I finally heard some in-ears I liked it was like, ‘Whoa! Okay, I like this a lot more than trying to make a lot of speakers sound nice in an airplane hangar,” he laughs.

Although well known in monitoring engineering circles, people tend not to know Rupsch by his real name, instead referring to him as ‘Supa Dave’.

“It's kind of funny; I'd never had a nickname in my life. When your name is Dave, you've got about a one in 14 chance of getting nicknamed Supa Dave anyway – it's not that unheard of,” he insists.

“I started working for the guy that hired me in my first job in music and he started calling me Supa Dave, and introduced me as that as a joke. Then everybody meeting me for the first time knew me as that – they don't even know your last name. Then the bands that came in knew me as Supa Dave, and some of those bands ended up taking me on tour. Everybody I’d meet on tour would call me that. It gets to the point where you'd call an audio vendor back saying, ‘This is Dave Rupsch, I need to talk,’ and they're like, ‘Who? Oh it's Supa Dave! Hey, how are you?’” he laughs.

“I knew every one of their songs, I was like, ‘show me the setlist, I know what's going on!’”

He expected everything to be very loud on stage, but was pleasantly surprised with the band’s thorough and systematic sound check, starting with turning FOH and the wedges off and just listening to the drum kit, then bringing in the side-fills, then the subs, then adding the bass, turning on the cabinets on stage, and going from there to make sure that every source sounded balanced.

“You'd have these little pockets all around the stage and I found that doing those little movements really made a difference in the overall stage sound. It complements the in-ears – the idea being that once all the monitoring and stage sounds good, all the cabinets and the amps are good.

"It's nothing complicated or fancy, but taking these simple approaches really makes a nice difference in your end result. When it comes to sound reinforcement, we have all this technology, so you have to back up a little bit and just make a naked, bare room with backline sound balanced.” 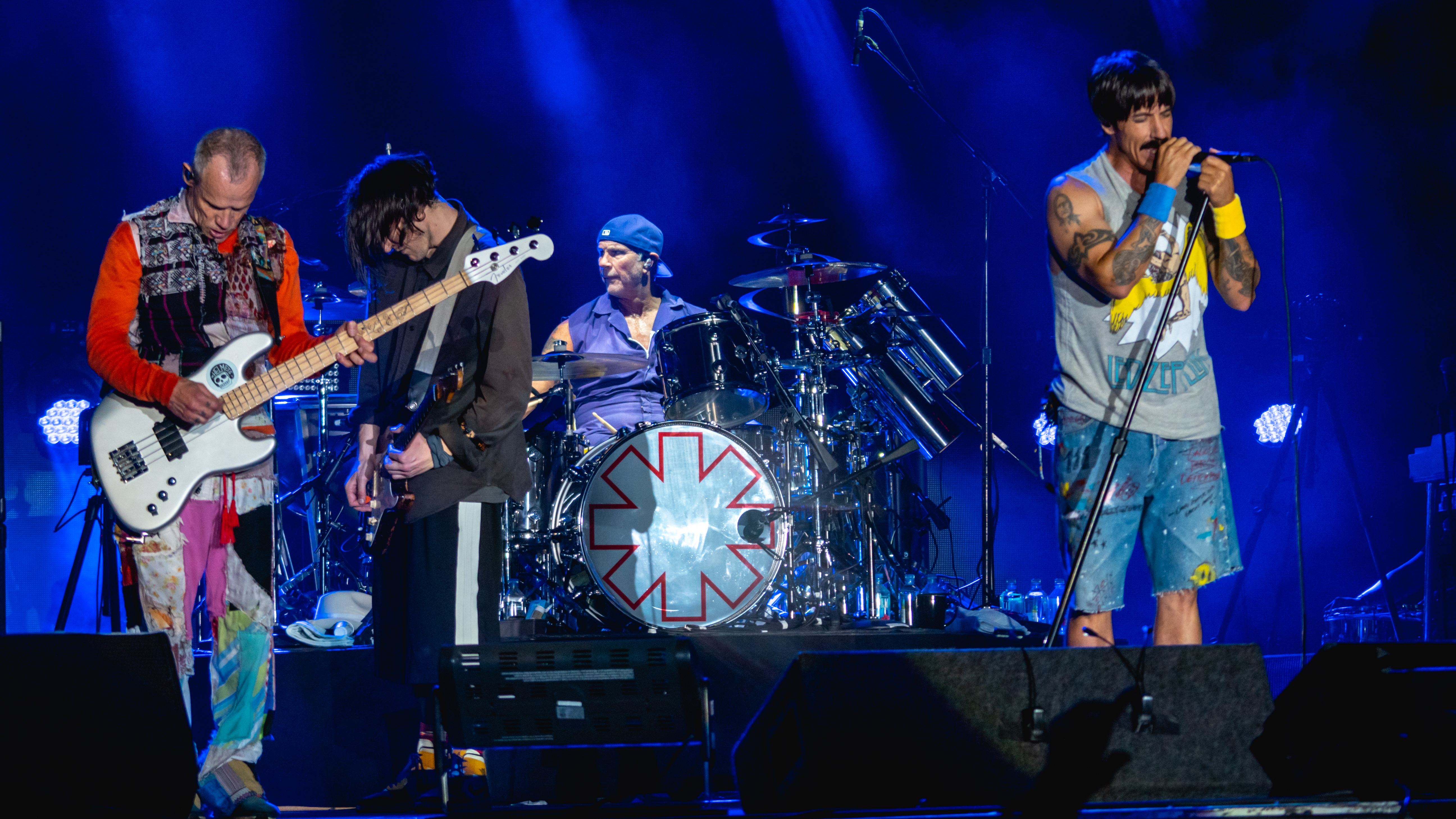 With the layout of the SD5 and SD7, you're sitting in first class with those things.

Having been with the band for just over a year and a half, Rupsch considers himself fairly new to the Red Hot Chili Peppers camp – and he’s loved every second of it.

“This is such an iconic band and they’ve been doing it since the late ‘80s, so it’s really been a lot of fun to go into something like that,” he enthuses. “To get a call to do a job like that…” he trails off. “Wow! This is a band that I went to see as a fan and as a ticket-buyer. When you really see it up close, they're greater than the sum of their parts. It's just four guys and they have this really iconic sound.”

Rupsch says that the challenge with the Red Hot Chili Peppers’ in-ears is making sure the sound doesn’t get "cluttered" – he chooses to play with panning, phasing and mic placement for the in-ears to create a wide and balanced sound for the band.

“Once you get the feel for the band… there's no secret magic, no reverbs, there's nothing crazy,” he insists. “Occasionally if there's a long some held out notes or something, maybe I’ll sprinkle some delay in there just to make it fun for the vocal. When you listen to the albums, it's nice punchy drums and some compression, so it’s just getting everything balanced and sitting together.

"It's very fluid and I'm not prone to using snapshots on this – where I would be with other gigs – because things can change. Especially a band like this that has a catalogue of hundreds of songs – everything is on the table every night, so they could pull out anything. You really want to keep it fluid and be able to move around and get the band to sit well together and hopefully, help them feel comfortable on stage.”

Helping Rupsch navigate these on-stage challenges are DiGiCo’s range of consoles, which he has been using for the last nine years – mostly alternating between the SD10, SD7 and the SD5.

“It's a nice problem to have – just give me any of them and I can make it work,” he laughs. “Although with the layout of the SD5 and SD7, you're sitting in first class with those things. They're just something else. I really don't use any outboard gear – no plugins,” he points out. “The DiGiCo is the centerpiece of everything that I do. I like to try and keep everything as simple as possible and try to keep as many things inside the box as I can, using all internal reverbs and dynamics.”

The Red Hot Chili Peppers have recently begun using JH Audio JH16v2 in-ears after deciding that they needed a change, which Rupsch is happy to report has been working really well for them. In terms of I/Os, Rupsch has a rack of 12 channels of in-ears which includes spares for everyone one stage.

“The Chili Peppers have a keyboard player that plays on about half of the songs, so we’ve got maybe 16 channels back there,” he explains. “There’s eight stereo keyboards, and that's another nice thing to really add some layers to a band like that. I have some wedges on the stage there as well, but they're really just there for spares or maybe if a guest just happens to come out. Josh, the guitarist, would use wedges when I started, but he was curious about in-ears, so we started to move him towards in-ears as well. He ended up liking it and we were able to bring those wedges down and eventually muting those to clean up the stage sound.

“We go 96k at monitors,” he continues. “I like to separate some of the monitoring on stage, so the only thing that would be coming to the side fills (L-Acoustics ARCS) would be the keyboards because they're all stereo pairs and you get a really nice, wide image. The side fills are kicked way off to the side of the stages so you can move around the stage and hear all of the natural amp sounds as you're walking around the stage, and then hear your keyboards coming away from the outside to help you harmonise and make the stage sound big and separated, especially if you do go to sing or are playing a solo.

"You don't have stereo sources like keyboards coming through a mono wedge or anything like that, in addition to trying to clutter up what you're actually trying to monitor. So I try to do little clever things like that. If somebody wasn't using in-ears, it sounds very natural and they can maintain a performance dynamic.” 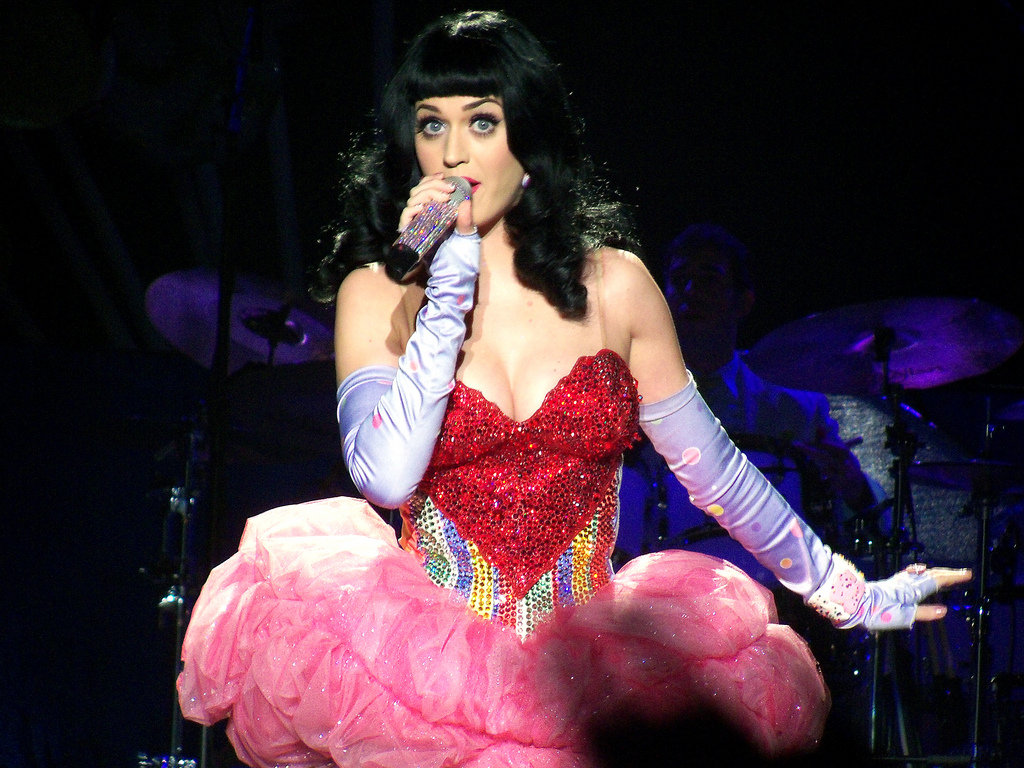 Rupsch has been working with Katy Perry since around 2008 after the success of her single, I Kissed a Girl. He was asked to fill in at one of the (then) rising star’s shows on monitors, and he’s been doing it ever since.

“I think the running joke now is I'm still just filling in,” he laughs. “It's been about 12 years now. It was my first step into doing pop music. I'd done a lot of pop, punk and rock and roll up to that point, so it was really fun – from an audio standpoint – to listen to these well-arranged pop songs. I can hear why a song is a hit; there's a spot and a place for everything and all these textures and sounds. Plus, Katy is a hard worker – she puts in all the time and she deserves every bit of success that she has. I've never seen anybody work as hard as she does; she has a great vision. That kind of work ethic is contagious.”

For a touring pop artist like Katy Perry, Rupsch is easily able to convert his console files and switch between a DiGiCo SD5, SD7 or SD10, depending on what is locally available. In terms of the desks’ screens and the ability to easily lay everything out, he prefers the SD3, although the SD5 and SD7 also contain some of his favourite functionality:

“I really like the extended high resolution meter bridges on those,” he confirms. “For Katy, when we're doing rehearsals and we're adjusting key patches and track levels and all that stuff, you're really getting down to, ‘Bring this patch up 2dB, or down 2bB here – you're really massaging all of your sources. Those meters are great because I can tell our Pro Tools guy to bring it down a dB and a half. It's really handy because you can give somebody a pretty accurate piece of information to go with.”

“With the band, it's really a three piece bandwidth: you have somebody singing, guitar, bass and drums, and somebody singing over the top of that. For monitoring, it was interesting going from something like Katy Perry where you've got sometimes eight or 10 people on stage with all kinds of keyboards, multiple guitars and tonnes of layers, and you go to something like the Chili Peppers, which is the opposite of that.

“Her band plays everything – if you were to mute any kind of playback stuff, there would be really no difference in what you'd hear. When you have the sounds you can’t replicate live, plus sonic and spatial enhancements, plus a band and then you have to consider monitoring as well, it's tricky to blend a lot of these sources together because you don't want to make it sound like karaoke where there's a band playing on top of some electronics.”