Kent-based alternative-rock four-piece, Dohny Jep began as a duo in early 2019 and decided they wanted to create something unlike anything either of them had done before in previous bands. Made up of Stuart Day on guitars and vocals, Pete Herbert on bass and vocals, Rowan Tremain on drums, and Wayne Ambrose on guitar, the band used the lockdown period to work on their EP, Smile, It Might Never Happen.

Headliner must start with the name. Where did Dohny Jep come from?

“About 10 years ago I was writing music with an old uni mate and we were trying to think of names,” says Day, who is joined on the call by band members Herbert and Tremain (Ambrose is at work).

“I can't remember where I came up with the idea, but a spoonerism is where you take the first letter of each word and you swap them around. I basically spent a few days writing down a bunch of celebrities' names and swapping around the first letters of each word to see which one would be the funniest.

"And that's how Dohny Jep came about! I then sat on that name for ages because there wasn't really a project that I thought would be good enough for it until Pete and I started writing together.

“It's quite light and it's funny, so I feel like it represents us as people as well,” he considers.

“While the music isn't necessarily that light, we have elements of lightness to it, so it’s like comic relief in a way – because we're talking about loads of mental health issues, but we’re called Donny Jep. It also serves the purpose of being an icebreaker and a talking point. So hopefully people remember us based on the name alone, whether they like the music or not,” he laughs.

He discloses that another name on the cards was Cicolas Nage:

They began as a duo in 2019 (made up of Day and Herbert), with Tremain and Ambrose joining later on. The band knew that they wanted an entirely new sound for what was to become Dohny Jep.

“Before this, Pete and I were playing in a rock band, which was fun, but we wanted to do some really catchy and poppy-style rock music,” explains Day.

“Admittedly, the first album isn't as catchy and poppy as it could have been. But we were learning what we were doing at that point. One of the main things we wanted was hooks, vocals and instrumental all over the songs; basically, a little bit like how the name is memorable.

"We wanted these songs to get stuck in people's heads to annoy them so much that they would remember them!” 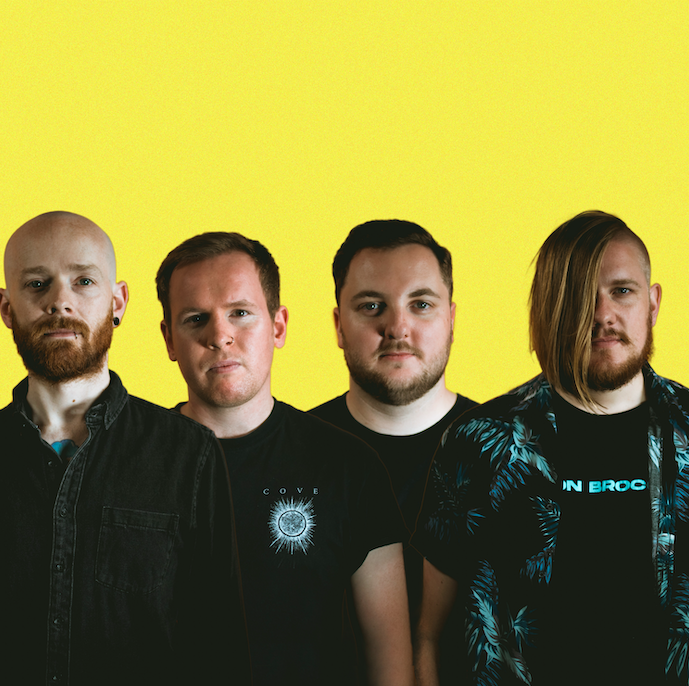 We wanted these songs to get stuck in people's heads to annoy them so much that they would remember them!

With their unique video concepts and mesh of pop-synth melodies and rock guitars, they set about creating their signature sound. Fast forward one year and with an additional two members in tow, the group self-released their debut album L.U.S.T in July 2020.

“That was interesting, to say the least,” says Herbert on releasing their debut album during a global pandemic.

“We wanted to get out there and play in front of audiences, so that was a bit of a bummer. But it did help massively from a social media point of view. It helped us to understand how to engage an audience online, so it was a blessing in disguise.

"I'm not calling the pandemic a blessing in disguise!” he adds quickly. “I just mean the situation of not having any other choice but to work on your online approach – that was a golden opportunity.”

Tremain comes to his rescue:

“I definitely think it’s boosted our confidence on how to operate with social media and take advantage of it, as well as plan a lot better as well. I mean, we're fairly good at planning but I think when you're not able to gig you really have to make the most of that. So it’s sort of been an opportunity in disguise.”

After playing just one show together as a band, the pandemic put a halt to any plans of playing their new material live, so they headed back to the studio. Here is where the EP, Smile, It Might Never Happen was born, which explores themes of mental health, friendship, and letting go of the negatives in life.

“Mental health is something that we touched on in the first album,” Day points out.

“I don't know anyone of our generation who doesn't suffer with the same sort of things, regardless of where you're from or your social standing. I think everyone is in the same boat, because we all live in the same world. I don't think there's one person who hasn't been affected by mental health in any way – even before the pandemic.

"It's a topic that we're pretty passionate about in the sense that we're not afraid to talk about our own mental health issues. If other people can relate or find comfort in that to go, ‘oh, well, I'm not the only person’, then we've done our job in a way.”

Recorded at their recently-built home studio and produced, mixed and mastered by Rhys May (Bring Me The Horizon, Don Broco, While She Sleeps), the EP’s lead single is Looking In, which is about feeling left out and neglected, yet struggling to make these feelings known.

“I tend to write a lot of the lyrics... I'm not sure exactly what really brought that one about,” admits Herbert.

“A lot of the time we sit and listen to the music and jot notes down on our phones of lyrics and so on. It was just, ‘oh, I'm feeling this way’, but it actually worked as a song.”

“I think this was the first song we'd written between L.U.S.T and the new stuff,” Day remembers.

“I think it's about social anxiety and about not fitting in when you go out to parties or bars, and feeling out of place. Each song we've done is a little bit different anyway in terms of how we have approached them.

"But yeah, as Pete says, we start with the music, and then we just sit there and have it on loop for ages, which can be slightly stressful when you're trying to find a rhyme for orange…” he laughs.