After achieving huge success as part of electronic music group, Hot Natured, Anabel Englund is ready to branch out on her own. For this Californian singer-songwriter, her solo music means nothing unless it connects with people.

“I don't know how to just have a conversation that's not about anything,” she tells Headliner.

“I like to know who I'm talking to. Where are you from? What are the things that you like? Why are you the way that you are? What do you want to do with your life? Who are you? I want to tell you who I am. I don't know how to be anything else other than personal, because I want people to feel connected to me. I want people to feel like they know me – and I want to get to know people as well.”

Known for weaving personal lyrics over house music beats, the deep-thinking singer-songwriter was born to a musical family in Southern California and grew up attending Hollywood premieres surrounded by artists.

Forever bolstered by the infectious Hot Natured tune, Reverse Skydiving and her many collaborations with the likes of Lee Foss, Jamie Jones and Marc Kinchen (MK), Englund’s sultry voice has been heard from her hometown in Southern California, to shores around the world.

Staying true to the same energy that galvanized audiences while performing with Hot Natured, Anabel is now ready to share her personal connection with music, creative writing and people much more prominently in her solo works. Although admittedly, lockdown has made achieving that connection more difficult:

“I’ve done a few writing sessions, but not nearly as many as I did before all this happened,” she admits. “I'm the kind of person that needs to connect. It's really hard for me to truly connect [at the moment], especially when you're doing something so intimate is writing a song. But on the other hand, where that's been slowing down, I've been doing a lot of DJing, gathering tracks that I want to use, making mixes and playlists and getting a lot of things ready for my new music to be released.”

Music and the arts are in Englund’s blood – her grandmother is academy award winning film and TV star, Cloris Leachman, who helmed a family of actors, musicians, and creative personalities that inspired Englund to find her own artistic outlet. Although she says she was always realistic about her expectations for success from early on:

"So I feel so lucky to just kind of have it happened, but that's why I feel bad for people who are just like, ‘Okay, I'm going to quit everything and be a singer and just go for it,’ – because it is just so much work and persistence. I know that sounds kind of dreary, but it's the reality of things.” 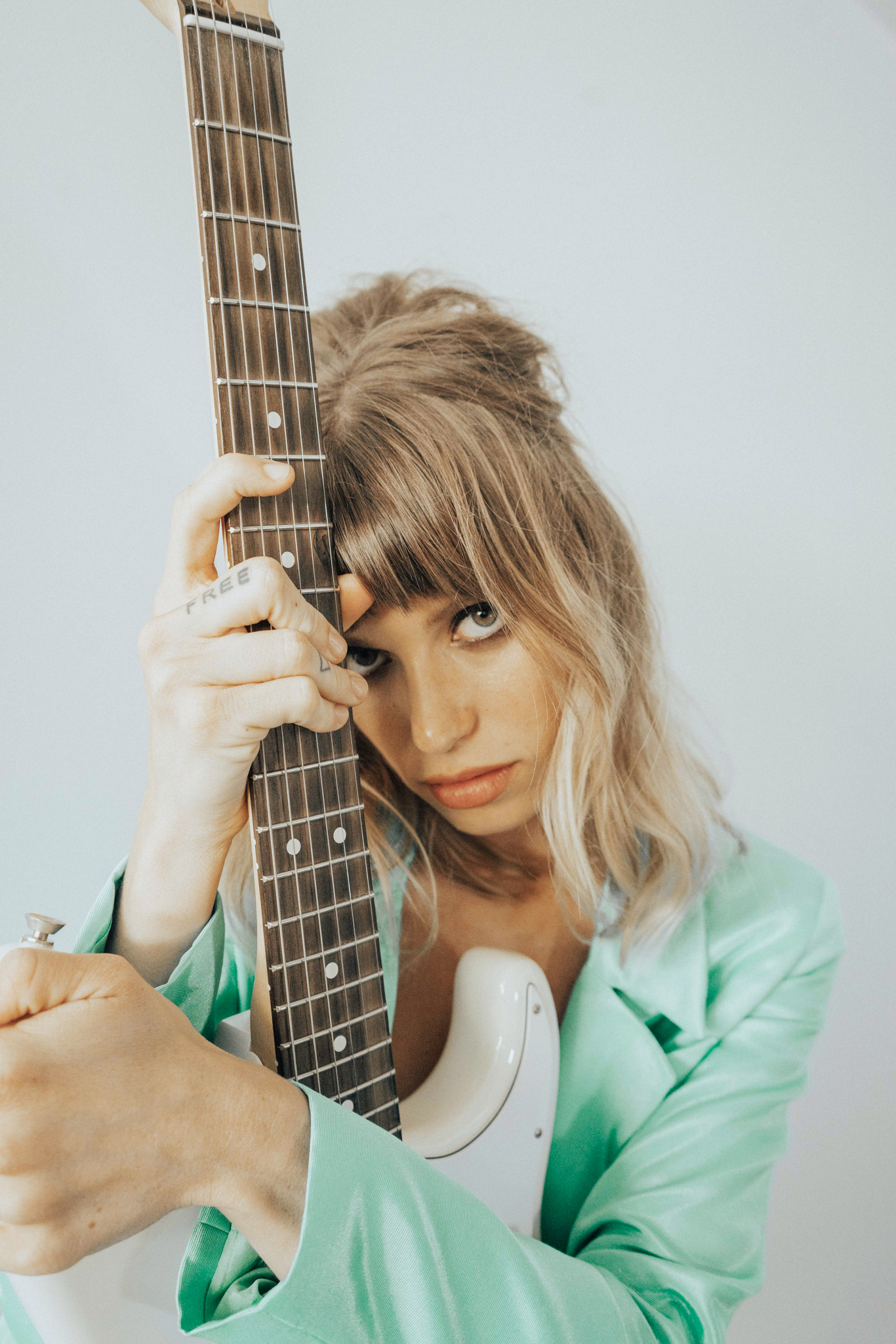 I've always wanted to do stuff on my own and not really depend on anyone or rely on someone to be able to make money.

Helping her find success was a video Englund uploaded to YouTube, which caught the attention of Disney’s ABC Family. It was then that she met electronic music group, Hot Natured’s Foss and Jones, and producer Kinchen (MK), who invited her to sing on a track. From there, Englund fell in love with the house music scene.

“All of a sudden, I was recording with my idols and then after that I was doing a world tour. I was like, ‘Whoa! What is my life right now?’ It was crazy. It wasn't like I knew that's what I was going to do, or I had planned to do that, or it was my goal. It just kind of all happened that way. And I obviously wanted to do that,” she adds quickly. “But it wasn't on a vision board or anything like that.”

England featured on Hot Natured’s song Electricity, released through Hot Creations – a track that was lauded in the electronic music community and added to rotation on BBC Radio 1's Essential Mix playlist, bringing Englund into the spotlight of deep house music.

The next three singles from Hot Natured, Reverse Skydiving, Mercury Rising and Emerald City all feature vocal and songwriting collaborations from Englund, who also played with the group at Glastonbury, Sonar, Eastern Electrics, T in the Park, Bestival and Park Life.

“I really was thrust into a world that changed my life dramatically,” she recalls. “I feel like I just grew up really fast. For our first ever live show at the O2 Academy in Brixton, I looked at the venue and thought, ‘it's not that big, we're good’. And then I saw all the people in there…”

After that initial performance, something shifted for Englund:

“My makeup was very precise and my hair was very tight – up and done. I didn't realise how nervous I was going to be! The right after that, it was like, ‘I want my makeup darker, I want my hair sexier – I want to let it down more and just be more loose’. It went from feeling like going from the way I felt I needed to be, to all of a sudden feeling really in my body and sexy – channelling this thing that I get to be when I perform. It really gave me my footing in performing for sure. I'm grateful for that.”

Englund is excited to spread her own wings and carve a name for herself away from Hot Natured:

“I've always wanted to do stuff on my own and not really depend on anyone or rely on someone to be able to make money,” she says. “Signing to Area 10 through Ultra has been really fun for me because I've made a bunch of music on my own and I'm finally able to put it out.”

“It's just blowing up!” she says excitedly. “It's climbing the Billboard dance charts, which is crazy. The first time I played So Hot was a show in Boston, and I was like, ‘will the crowd like it?’ Because it's not like a house track; it's more of an indie-dance track. I performed it and everyone was singing the words. I was shocked! It just made me feel so happy that even before I signed to Ultra, So Hot – just from my fan base alone – was doing something. Then when the So Hot remix got signed, it just gave this extra breath of life to the original and the remix.”

Another recent track of Englund’s making waves is See The Sky (Tracy Young Remix), which is the unlikely result of a 15 second loop that was sent to her by a friend.

“I was like, ‘what is that? You have to send me that right now!’ I instantly heard the melody and I heard the words in my head. I needed to write this track immediately! He was like, ‘it's just a loop, it's not even done. I'm still in bed!’ I said, ‘well get out of bed and send it to me ASAP before the info gets lost’. It was just one of those tracks where all the words were built in me already and I just needed to get them out on paper. Hearing that loop unlocked something.”

England sees the track as an ode to herself and humanity as a way of recognising the light inside, and not being afraid to shine it:

“A lot of people sometimes feel like they're not enough or that they're alone; that even if they tried, it wouldn't matter,” she says. “It's my message to humanity that we're all connected. We're all a family and I need you, basically. It's really important to me because I wasn't planning on it coming out during this time, but it's interesting because of the lyrics: ‘Where would I go if I could fly? Would I see my ma and my pa, give them a big hug?’

"Being stuck in quarantine, it's true! I haven't seen my mom or my dad in a while and I wish I could just give them a big hug and tell them I love them. The song is for people who feel stuck in life, who don't decide to take that chance of what they know is right.”

On the music industry being male dominated, Englund is actively trying to work with more women:

“It's still not male dominated 100% – I think women are doing an excellent job,” she notes.

“But I'm also looking out for them – I'm searching for them. If I go to a festival, it's mostly male agents, male managers, male promoters which is fine, but I think definitely women are finding their voice and being accepted more. I am on the lookout for more women in the scene. I think being signed to Ultra has opened my eyes to the women in the house music scene, and I hope women keep shining their light. Whenever I hear another woman singing on a bass track and then it has a sick remix, I'm for sure playing it!”