Guitarist and musical director, Chris Wrate’s first professional guitar gig was on Oprah, so it follows the same trajectory that his first musical director job was working with Ariana Grande. When it comes to amps, Wrate reveals his game-changing Celestion discovery...

Usually working as a guitarist and musical director to Kelsea Ballerini’s band, Chris Wrate has been kept busy with a different kind of challenge during lockdown.

“I’ve got six year old and we're expecting our second soon,” he says at the time of writing. “My daughter has been asking for a long time to take the training wheels off of her bike, and I thought it was a little bit early. But I was like, ‘well, if there's ever a time for us to have the time to learn, it’s now!’ So a couple of days ago we took the training wheels off, thinking it would take days or weeks or months, and the next day she was up and riding without my help! I was hoping that would last me a while, but she's on to the next thing already,” he laughs.

Originating from Wisconsin and now residing in Nashville, Wrate grew up around the local blues scenes of Chicago and Milwaukee, and it was his versatility as an artist that allowed him to work with a wide range of artists in a variety of genres, from blues, pop, rock, R&B, funk, to country.

Wrate has accumulated a lot of experience in writing and studio recording, however the majority of his work is with other artists as a live or session musician, including working with Ariana Grande and David Foster, and appearing on TV shows such as Oprah, American Idol, The Tonight Show, Jimmy Kimmel Live, The Today Show and Ellen.

Thrown in at the deep end, his first ever professional gig was on Oprah:

“I was at a school in Los Angeles called the Musicians Institute. I was trying to find a school where I wouldn't have to do any English, history or math homework,” he laughs.

“I found a school that specialised in contemporary music and was really good at placing its students in various fields in the music industry. I did an audition for The Offspring – they needed a rhythm guitarist and background vocalist for one of their upcoming tours. Then I auditioned for an artist called David Foster, and so my first ever professional gig was playing on Oprah with him!”

In terms of his work as a musical director, Wrate says that every artist is different:

“A lot of artists are very opinionated and they want things to be a certain way, and that's kind of your job as well – to forecast what they're going to want to hear. Our job entails learning how to frame everything: how to come up with a range of interesting ideas, how to be on the same page and how to steer the ship for different shows and tours and whatnot. It's definitely always something that's ever-changing and growing, so you’ve got to stay on top of it. The biggest thing is to forecast certain problems and work with any changes to your show. It's a super fun job; I enjoy it for sure.”

One of the first artists Wrate was a musical director for was Ariana Grande, although he didn’t take the offer seriously at first:

“When I first got the call, the musical director who has worked with Justin Bieber for a very long time sent me a Facebook message,” he remembers. “We weren't even Facebook friends. His profile picture was a kid holding a guitar. So I'm getting goofy messages saying, ‘Hey man, I’ve got a gig for you’. And I’m like, ‘yeah okay…’ You know?’ And he sent me another message, kind of a little bit more stern saying, ‘you need to pick up this call and get back to me’. I started to read this first message that said, ‘you’ve got an artist that sounds like Mariah Carey…’ I thought: I don’t believe you.”

After looking into it more closely, Wrate quickly discovered that the rumours were true and he signed on to do a radio tour with Grande to promote her first album, including a small tour.

“My first meeting with her was at her house; we listened to the album and she basically just said, ‘what do you think?’ I'm super blown away – she's obviously an amazing vocal powerhouse.”

Wrate was tasked with the musical director role of the tour of the US and Europe.

“She's one of the greatest vocal sounds out there right now, so that was a huge privilege and is definitely one of the peaks of my career. It was a huge step up, and especially to do musical directing with her on that gig. She’s very hands on and she knows the way she wants things to sound.” 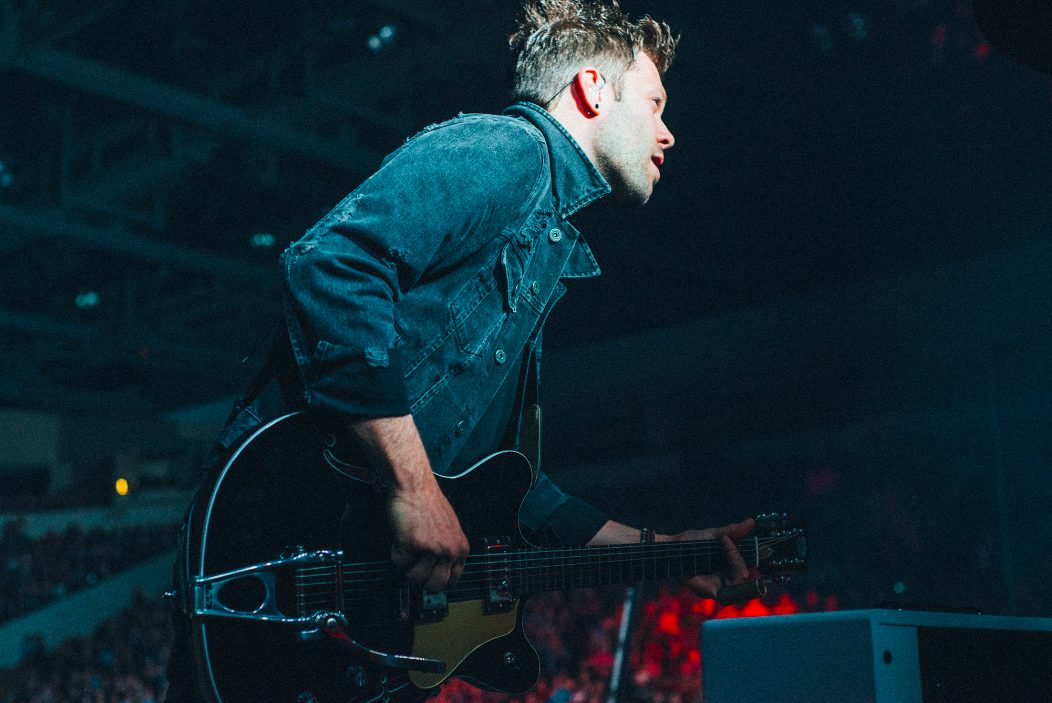 You can have a really cool boutique amp, but if you don't have a great speaker…

Wrate has his go-tos when it comes to live amps and the digital side – recently switching over to a Fractal from a Kemper, using a combination of the Celestion 2´12 (closed back) Vintage 30 speakers and the Golds. Before recently having the band switch to digital platforms, Wrate was using an amp with a Vintage 30 and a Celestion Gold, although the Creamback is another favourite of his.

On switching to digital, Wrate admits that he was not very excited about it at first – guitarists like loud amps, and he was concerned that digital ones would not sound the same. However he is happy to report that he is now fully on board – with Celestion impulse responses helping with the transition.

“I've loved it! It's been really cool,” he says. “In terms of impulse responses, I really hadn't checked into them just because I simply didn't need them at the time. And so that was really cool to incorporate. A lot of the same impulse responses and certain ideas and concepts that work with the speakers in a live setting are translating just as well with a digital platform. You just want consistency, especially when you're moving to something that's very foreign to you. It's new, and you’ve got to try and offer the same kind of sounds and tones as before.”

Naturally, every guitar player cares deeply about how they sound:

“That’s one of the first and foremost things: you want to have a sound and be confident in that. When I first got acquainted with Celestion, to be honest, my knowledge of speakers themselves wasn't very strong. That's when I realised, wow! This amp can change a lot based on what speaker cabinet it is running through.”

“It was just as strong [a revelation] as when I started to realise that speaker cabinets make a big difference. You can have a really cool boutique amp, but if you don't have a great speaker…” he trails off. “Whatever information the amp is trying to put out is only as good as the speaker that it's pushing sound through. It's a huge difference and you don't realise it until you start playing through different cabinets.

"Even the cabinet build itself is a big component to how that speaker is going to sound. The IRs help an immeasurable amount to bridge that gap from making the transfer to a digital setup, because it is very different for a lot of musicians to get used to having played and done one thing for so long and then switching to something completely foreign.”

Recently, Wrate was working using his Kemper, and was suddenly curious about what the original profile sounded like without an IR against it. He used a profile of an amp he already owned with a cabinet setup with a Celestion Vintage 30 and a Gold. The result was so drastic, it became a game-changer for Wrate:

“The information that the Celestion IRs open up about an amp...there’s just certain positive frequencies that are now being projected that weren’t before (in a good way!), it just gives you so much more information. It’s one of those things where legitimately, to me, it’s a game-changing piece of gear. Whichever Kemper I was profiling the amp through made you go to the cabinet module, and it'll say, ‘this is the default cabinet’ – it might not have much information on it. Then I selected a Celestion IR that I knew would work really great. I had previously played a few notes with the default cabinet but I was just like, ‘man, that went from sounding terrible to really good!

“It was like somebody put a blanket over my amp and said, ‘play with the blanket on,’ and then play with it off. I think I'll play with my blanket off the amp,” he laughs. “There's so many characteristics about the amp that weren't being told until I put that IR in front of it. I would be so unhappy if I didn't have this product because it changes it so drastically. It’s a real game changer if you're using this digital stuff.”