Eva Gardner: All About That Bass

Eva Gardner and her custom Fender bass are responsible for carrying the bottom end of P!nk’s epic touring productions, using Lectrosonics wireless kit to ensure her tone and the integrity of her sound is perfectly captured.

“My dad opened up a British pub in LA – bringing a bit of home to Hollywood, so I grew up in a pub around a bunch of musicians and entertainers. I just knew from an early age that that's what I wanted to do as well,” says bassist Eva Gardner, who’s currently locked down in LA.

Her father was an integral part of the British Invasion in the ‘60s and ‘70s, and was the bassist in The Creation, The Birds, and Ashton, Gardner and Dyke. When engineer and producer Andy Johns (Led Zeppelin, The Rolling Stones, Rod Stewart, Eric Clapton) brought a Pignose amplifier and bass guitar over to the family home, it only seemed natural to pass the bass-shaped torch onto a14 year old Eva.

“I never had any doubt about which instrument I wanted to play,” she asserts, adding that she thinks the bass is an underrated instrument. “A lot of times people start on guitar and then they move to the bass, but I went straight to the bass.”

Deciding to further her musical studies, Eva attended the Los Angeles County High School for the Arts, later graduating from UCLA with honours with a degree in Ethnomusicology. Her professional career began when she toured and recorded as the original bassist in The Mars Volta. Since then, Eva has performed and toured with numerous artists worldwide – notably with P!nk when she became her touring bassist from 2007 onwards.

“I was working at the pub and I got a call from a musical director. I was working with my mum that day and I said, ‘Hey mum, I have an audition across the road. Can I take off for about half an hour? Will you watch the bar for me?’ I slung my bass around my back and ran across the street and did the audition. I got a call the next day, and I happened to be in a movie when the musical director called me, so I was in there for a couple of hours.

"I had this message when I got out of the film that said, ‘Hey Eva, great news – you've got the gig. But if you don't call me back within the next 10 minutes, I'm giving it to the next person’. I'm like, ‘Oh my God, I've been in a movie for two hours, did I just totally blow this?’ So of course I rang them up as quickly as my fingers would allow, and he picked up and he said, ‘Hey, what's up? I was just messing with you. You got the gig’. I think I had a bit of a heart attack!”

Eva was promptly sent four albums worth of material to learn and was told to pack for three months for the summer tour – that kicked off just three days later.

“[P!nk] is unparalleled as a person as much as she is a performer; she's just one of a kind. What an honour to be sharing a stage with her... just to be part of her team has been nothing but a gift.” 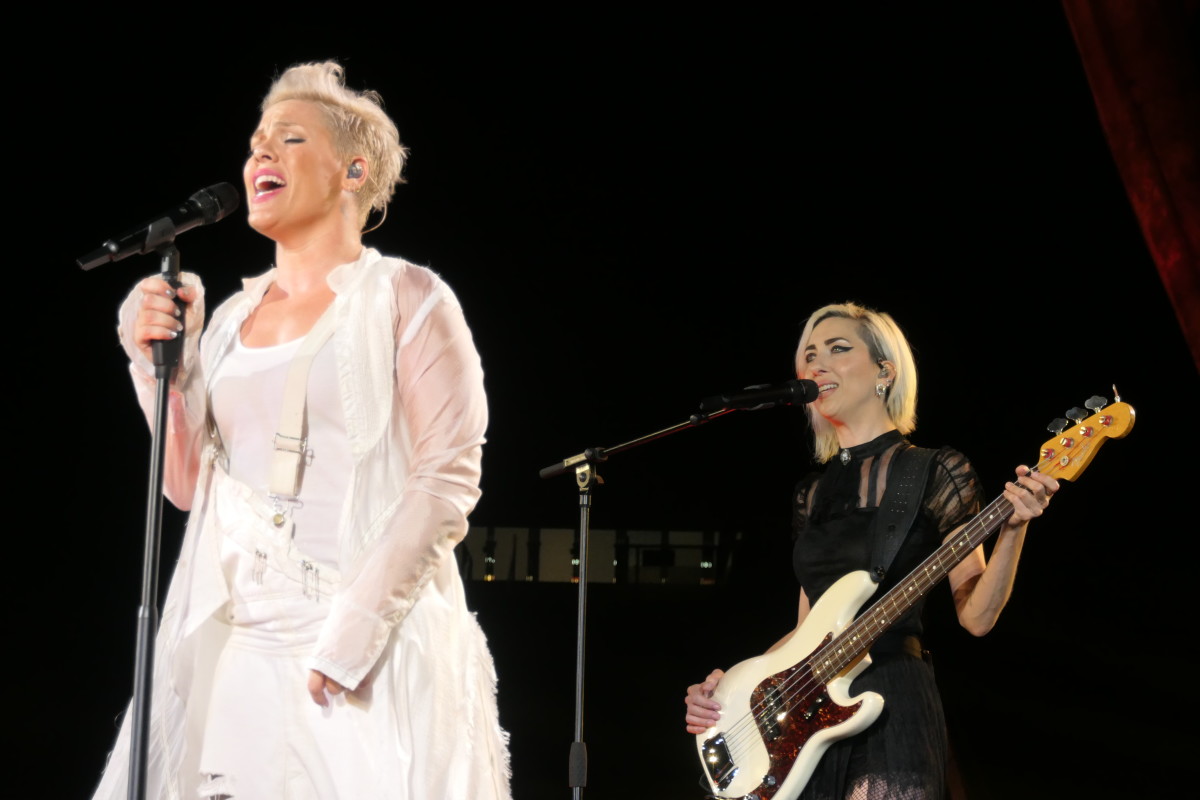 P!nk is unparalleled as a person as much as she is a performer; she's just one of a kind

Due to fortunate scheduling, P!nk did not have to cancel any tour dates this year, with her two-and-a-half year tour wrapping up at the end of 2019.

“We did two nights at Wembley Stadium last year – that was actually this time last year!” she realises. “It was incredible, but luckily we got to finish up the tour last year. We didn't have anything on the books with her this year so...phew!”

According to Eva, the force is strong in the bass community – especially now that lockdown has brought a swift halt to all live gigs and meet-ups:

“We’ve got a bass player hang, because we were like, ‘drummers do this all the time, so why can't bass players?’ I was organising bass player hangouts at the pub and we were all coming into the bar, and then it just started to grow. We did a few of them in person, and then when this started happening, it became a Zoom bass hang.”

During lockdown, this sense of community has felt more important than ever:

“We're all in the exact same boat right now so we're all partially commiserating, supporting each other and lifting each other up. It's really been fun for us also, because bass players are never on the same gig – there's usually only one bass player! So it's been cool for us to get to know each other as well.”

In 2014, Eva became the first female artist to have a signature bass with Fender.

“Being able to develop an instrument with them was an incredible honour – Fender was a household name when I was growing up! To me, it was a ‘why reinvent the wheel?’ kind of a situation – it's just solid as a rock and it's super versatile. It's what I grew up playing; I have explored other instruments from other other brands and I just keep coming back home. I wanted to make it a conglomeration of all my favourite basses and honour some vintage specs, but also modernising it a little bit. It's a solid Precision with a twist.”

On stage, Eva is a long time Lectrosonics user after needing to go wireless due to the epic nature of P!nk’s touring productions, using an LR receiver and tow LT transmitters for her bass rig.

“There's so many moving parts on the stage, between the stage props, the set, the dancers, acrobats, the artist herself – there’s lots of stuff moving around, and we move around as well. I needed to get rid of the cables and I needed to have something that was wireless. I've been using wireless systems for a long, long time and then it got to a point where what I was using wasn't cutting it. I was having issues with it not really getting my tone and losing the integrity of my sound, so that's when I came across Lectrosonics.”

Eva remembers the exact moment she tried Lectrosonics out:

“The band even noticed! They said, ‘Oh, there you are! Great to have you back!’ – because when you're playing bass, so much of your sound is you carrying that bottom end. You're supposed to be the glue for the band. It's funny because they say that the bass is the instrument you don't know is there until it's gone, so you really need to have that bottom end and that presence. A lot of that is having those frequencies intact and having that really nice tone that you can lose when you go off the wire. To be able to have that back and maintain the integrity of my sound was a big deal. There's not a lot of room for error. Actually, none probably,” she laughs.