If Juliette Lewis says you’re cool, you’re cool. In October 2021, the actress shared a video on her Instagram of a double neck guitar-wielding Bella Moulden performing a loop video of Ozzy Osbourne's 1980 hit, Crazy Train, which got a share from Mrs Osbourne herself.

“Juliette Lewis, my queen! She shared it first,” says a still slightly dumbfounded Moulden, shaking her head at the memory.

“And then Sharon shared it too. Juliette Lewis is so cool. All I know is when I saw that she followed me, I was crying and throwing up,” she laughs. “I was like, ‘Excuse me? The queen of actressing (I just made that a word) has followed me? What's going on?’ I was actually crying on my toilet seat, like, ‘Is this real?’”

Hailing from Buffalo, New York but now based in North Carolina – “I’m not used to not having snow at this time of year,” the independent artist and multi instrumentalist is cool though – she’s totally mellow and candid during her first ever recorded interview and often stops mid sentence to poke fun at herself for losing her train of thought – “don’t you just love the way I talk?” she laughs after forgetting a question.

Check out her social media and you’ll see what caught the Natural Born Killers star’s attention – Moulden regularly updates her Instagram and TikTok with fuzzed-up covers of Black Sabbath, Stevie Nicks and The Black Keys – whilst rocking a wardrobe that’s straight out of the ‘70s.

“I love ‘60s and ‘70s classic rock,” she nods, “So, Jimi Hendrix, of course, although my tastes are pretty sporadic, like The Jonas Brothers, Prince, Gwen Stefani and Adele; I fell in love with her voice immediately – she is so funny. I love her. If I met her I would just pass away. I don't even know what I would do,” she laughs, adding that listening to Adele made her explore the soulful, singing side of music.

Listening to Prince inspired a young Moulden to become a multi instrumentalist – she plays piano and is self taught on ukulele, bass guitar, banjo and electric guitar.

“I remember watching him on MTV when I was young,” she recalls. “He was playing guitar and he was just shredding. I was like, ‘Holy crap. I want to do this – someone hand me a guitar real quick’.” 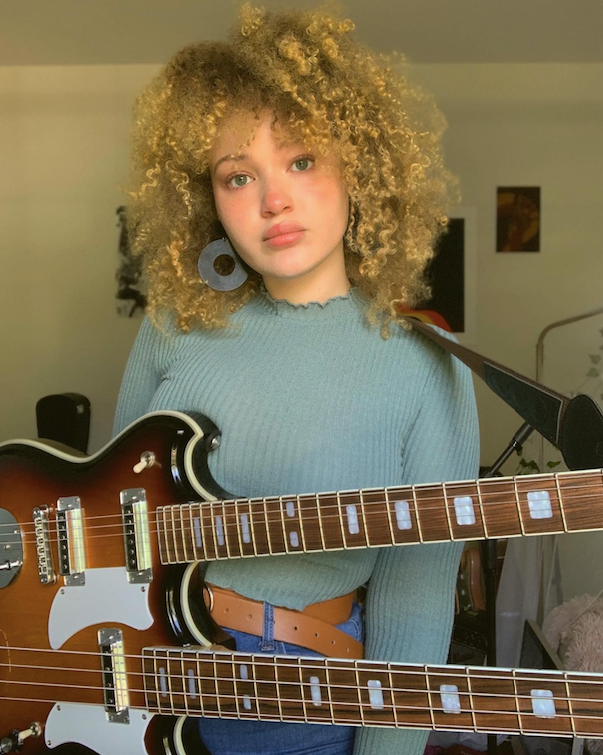 I remember watching Prince playing guitar and he was just shredding. I was like: Holy crap. I want to do this.

An old soul through and through, the first music Moulden bought with her own money was a Led Zeppelin record, which is ironic given that it was the band’s very own Jimmy Page that invested in a double-neck guitar in order to do Stairway to Heaven justice live on stage.

“My parents surprised me with a loop pedal and the double neck guitar last Christmas, and from then on I just practiced every day, even during my class lectures,” she grins, gesturing to the guitar in question, which Headliner can just make out in the corner of the Zoom screen.

“I was getting super frustrated before when making my loop videos, like, ‘How the heck am I gonna hurry up and grab the bass and grab the guitar at the same time?’ So I would actually stack my guitars on me with the bass at the bottom, which was really bad for my back, plus the guitars would overlap. So I did my research and boom! What do you know? Eastwood Guitars had this super cool double neck guitar, I instantly fell in love.”

Despite catching the internet’s attention with her electric covers of rock classics, Moulden has also been quietly releasing her own music since 2020, and produces her own material on Garageband, although she insists her producing skills are terrible.

“You’ve got to start somewhere,” she shrugs, “but as long as you have the right equipment, there's no need to go to a studio. I use GarageBand, but there’s only so much you can do with it. I sit on my floor and I am always hunched over – I forget to stretch out my back, so I'll just be sitting there for six hours straight working on a song that I never release. I feel like The Hunchback of Notre-Dame after eight hours.” 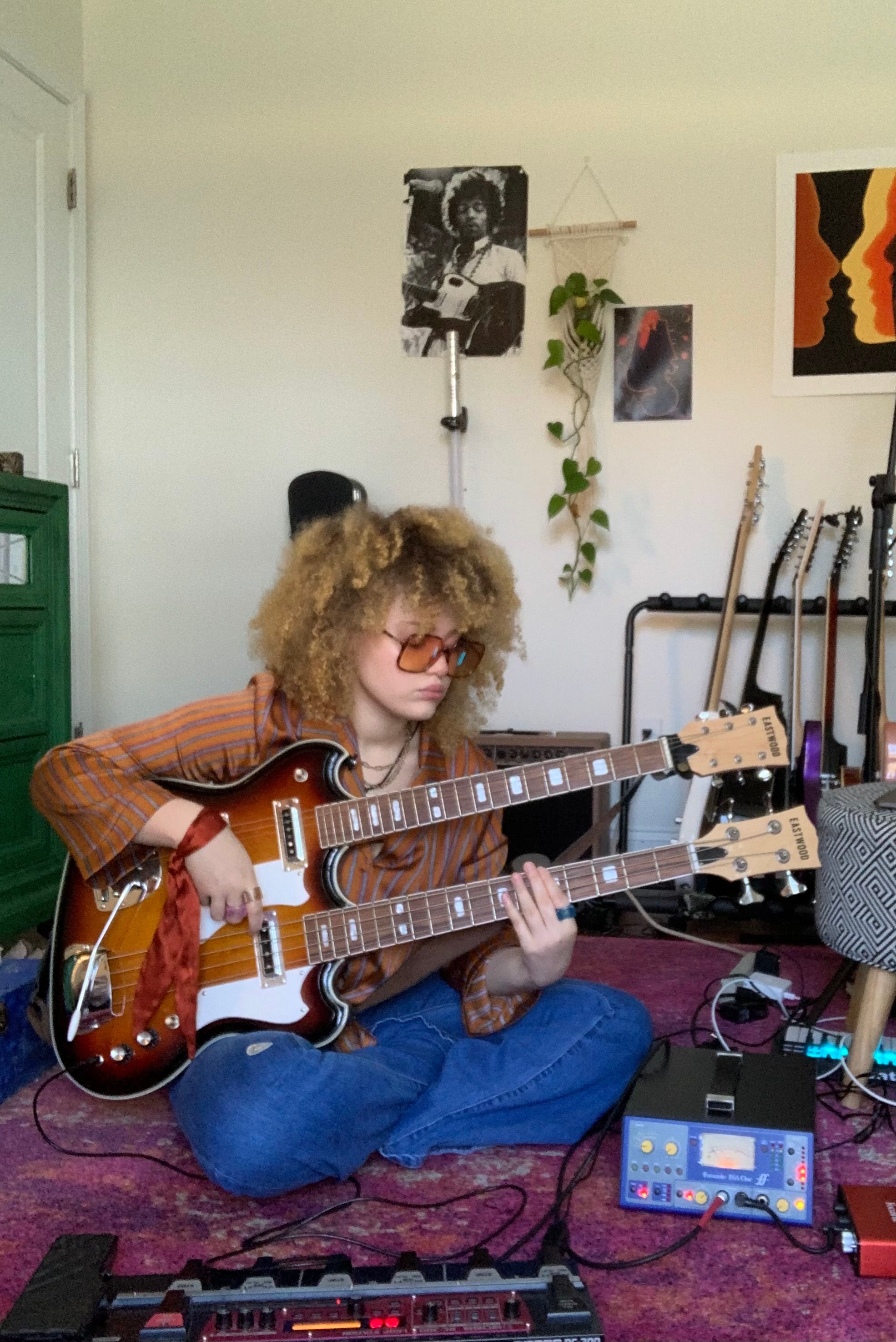 I use a lot of fuzz for my performances – the ISA One cuts out the noise and gives a lot of clarity.

Although not all of her kit is entry-level, as helping her create her recent loop performances is her new Focusrite ISA One preamp, hooked up to her looper pedal, her trusty Walrus Audio Eras Five-State Distortion pedal, vocal mic, DAW, and her old Focusrite Scarlett Solo interface.

“It’s phenomenal and clear,” she remarks about the ISA One.

“I use a lot of fuzz for my performances, including for the microphone, and there’s no excess static – it really cuts out the noise and gives a lot of clarity. Regarding the double neck for the bass part, it gives it an extra boost, and I could hear it much better than I usually can.

“It makes a lot of difference and it gives you a lot of control over the sound that you want in real time, which is so important, because you don't want to sound like crap,” she states, laughing wickedly.

“When you perform live you want it clear cut – you don't want any background noise or anything while you're performing. You want it to be, in lack of a better term, perfect. If I perform live just with my amp and my looper, it's super staticky and there's always some issue that I can't control, but using this preamp, it was much easier to control.

"It definitely makes a huge difference when performing and it blends it all together, especially because it has that independent DI so I don't have to deal with two separate things that I have to work with. So I can just use the same preamp for a microphone or an instrument.”

“I was watching it at 12am, eating candy, and the part came on where Bette Midler is singing, and I was like, ‘Oh my God, what if I make a song about witches and make it super cool?’ So I sat down at my janky computer, went on GarageBand and had this cool bassline stuck in my head that I wanted to try out, and that's how it happened.”

On her songwriting, Moulden isn’t quite ready to put all her innermost thoughts out into the world just yet, preferring to lean on hypothetical scenarios – for now…

“I pretend to be in someone else's position or I use one of my experiences as a way to write, but not making it so exact, because I don't like making songs that are about me and what I'm going through. I like to change it up a bit to make it feel more relatable.

"I don't like my personal stuff being super out there either… I'm weird about that right now, but I feel like one day I'll be able to express a lot of the things that I've been through.”

Does that mean some original music is on its way? (A question new fan, Lewis has also asked).

“I am working with some people, I guess I should say,” she says carefully, grinning. “I'm certain there'll be an album soon. I don't know when. But soon.” 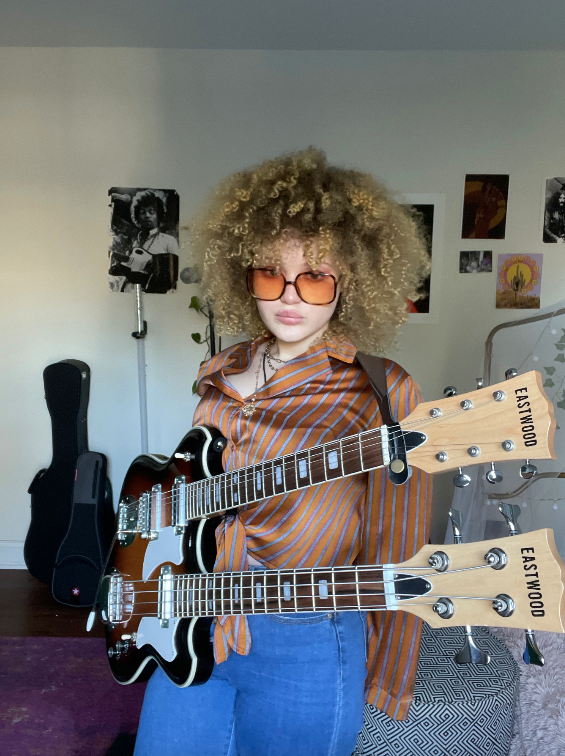