Not-a-Phil-Collins-cover-band, Thrill Collins, are absolutely adamant that they will never inflict their own music on the world, due to it being – in their own words – “dreadful poetry”. What is not dreadful, however, is this energetic (and self deprecating) British trio’s ability to create a full set comprised mainly of lengthy, crowd-pleasing medleys. Headliner catches up with the band following their Silent Disco King gig at 2000trees festival, who discuss their “incongruous and completely arbitrary precession of songs,” commuting to Glastonbury, and why they challenge Phil Collins to sue them.

“Expect medleys of such extravagant length that it would make the large hadron collider slink away quietly. Expect us to say hello politely and have a few drinks with you,” threatens Thrill Collins’ website – which Headliner can attest is an accurate depiction of the self-confessed not very rock and roll band.

Speaking to the band’s self deprecating frontman, Robbie Pert, (think David Mitchell or Jon Richardson) Headliner learns that the trio’s smirk-inducing name was nothing more than a throwaway line from some ten years ago. “I think the story is less good than I think it was,” Pert begins. “Basically [Thrill Collins] was the first thing I said when we realised we needed a name. I said: ‘Thrill Collins,’ and bandmate, Andy, laughed mildly. And we said: ‘Perfect. Take the rest of the afternoon off’.”

Forming in 2009 when working at a university in Cheltenham, Robbie (guitar and vocals) and Andrew Lansley (double bass and vocals) were unexpectedly thrown together to perform an impromptu gig after Pert’s band (at the time) didn’t turn up. With half an hour of empty stage time to fill, Lansley took pity on his abandoned pal and cobbled something together to fill the slot – despite the other bands on the bill dismantling the drum kit behind them as they played.

“We were playing rack toms like banjos,” he remembers. “For some reason everything that I had learnt on guitar – which I had only just started playing – were ‘80s and ‘90s pop hits. From that we said: ‘That basically works – let's do more!’.”

By day, Pert and Lansley hold down normal jobs: the latter is a lecturer in music production and recording, while Pert calls himself “the boring one” – he works in an office at UCAS. One of Lansley’s students, Peter Harper, came to their attention one day: ”We noticed that he could play a mean cajon – and could actually sing – which brought the number of actual vocalists in the band to a healthy one,” deadpans Pert. “He was filling in on loads of our gigs, so we said, ‘do you just want to be in the band seeing as you’re always here?’ And he said ‘yes please’.”

And so Thrill Collins became three. Touring all over the UK, the well-spoken trio are now a crowd favourite at many a summer festival, delighting sozzled music-lovers with their inventive and unpredictable medleys – but never, ever their own music, they stress.

“We absolutely never do original material because nobody needs to hear our poetry – it’s dreadful,” says Pert. “Whenever someone asks us what we’re like, or what we play, we always try to take it in turns to explain it. It’s my turn now, obviously. Basically, we call ourselves a skiffle band, or skiffle pop, so it’s 50s-style using improvised home instruments, playing jazz standards from previous decades. It just so happens that the stuff that we’re covering covers the last few decades, which means it’s mainly UK garage and Whitney Houston.”

The band has a lot of fun planning their lengthy mashups of said songs, which they liken to “planning a surprise ambush. Every song that we do, we think: ‘this will get ‘em, this will show ‘em’.”

At any given time, the band can veer from a 10-minute medley of UK garage, into a transition into Ricky Martin faster than you can say ‘livin' la vida loca’.

“It is one of the most incongruous and completely arbitrary precession of songs – we’ll go from an ‘80s thing, to the ‘90s, then go into Fall Out Boy. The overriding rule is that is should be good, but it should also be funny. We don’t really ever want to do a song that’s just a really great song – it should be a funny song in its own right, or it should be funny that we’re playing it. So it starts off in one direction [not that one] in an ‘80s power ballad, [think Footloose and Holding Out For A Hero], then trots into a reggae version of Hotel California, finishing with the Cantina Band theme from Star Wars. We are trying to get to the point – and this is something that we are actively trying to do – where every song we play is a medley.”

We have to ask: have Thrill Collins ever been known to cover Easy Lover or Sussudio?

“We used to do one Phil Collins song, but it wasn’t Easy Lover – it was Another Day In Paradise. We try not to go for the most obvious, if we can. If we can pick a B-side that everyone knows, then that’s the absolute goal. We tend to not go for the first one that you think of. But what we found was that it was much more confusing to do one [Phil Collins] song, than it is to do none.”

“As I'm sure you can imagine, there is a lot of confusion about the name: ‘You’re a Phil Collins tribute band then?’ And to give the answer: ‘No...well, we do one song by Phil Collins’ – it’s more confusing than to just go: ‘No, it’s just a funny name’. Well, it was funny for five seconds, ten years ago.

“We were kind of hoping he’d sue us at some point,” he jokes, nonchalantly. “I can just imagine the three of us walking into court in suits, looking really po-faced with the byline underneath: ‘Robbie from Thrill Collins’. Ha! I can see the headline now: ‘Thrill Collins defiantly challenges Phill Collins to sue them.’” 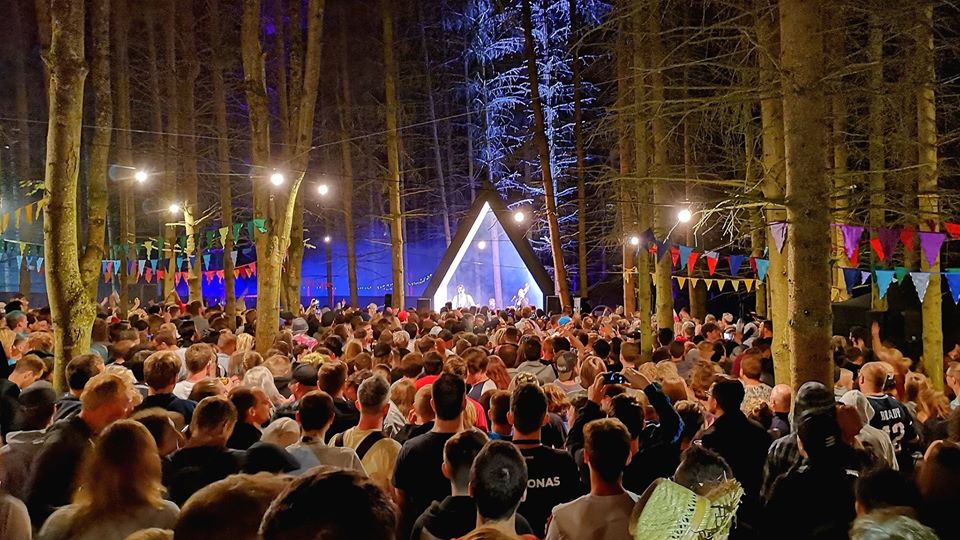 We don’t really ever want to do a song that’s just a really great song – it should be a funny song in its own right, or it should be funny that we’re playing it. Robbie Pert

Headliner swiftly moves on to a topic with fewer potential legal ramifications: a recent gig at 2000trees festival which saw the band embrace the Silent Disco King concept for the first time.

The band have been playing at the independent festival for 10 years now, but had never thought about performing a silent disco set-up. Pert doesn’t sugarcoat it: he thought it would be a disaster.

“I was the most sceptical – I was a complete naysayer all the way through, and thought it would be a complete disaster for us. We have attended a headphone disco many a time, and I think the idea just came up that we’d like to try something like that. We’re always a very odd fish at 2000trees – they have a very particular kind of music that they have on, and we’re this weird group doing ‘80s and ‘90s mashups that goes on at the end of the night.”

Typically for a music festival, the neighbours aren’t always a big fan of the noise, leading the trio to first consider the silent disco approach.

“We said: ‘that sounds amazing: I bet it won’t work’. I thought it would probably sound fine through the headphones and would work well, but I was adamant that we wouldn’t be able to hear ourselves properly, and that there were going to be all these huge technical issues, like there would be a delay in the headphones and everybody would be singing along a second too late. Actually, none of that happened – it worked absolutely perfectly, and it was probably one of the best gigs that we have ever done.

“I think it almost felt as if we were made for it, because in my experience, headphone disco audiences go to have a singalong, and there is something about having those headphones on – maybe that you can’t hear your own voice so well – people sing up, really loud - they go for it! So actually, it was really good. It didn’t feel that different. I had all my worries about ‘it’s going to sound really weird on stage because we’re not going to have the volume,’ but actually, it sounded better because we could hear it, and could hear ourselves perfectly. The headphone thing worked great, and I'm reliably informed that it sounded great through the headphones.”

The only thing that Pert did notice, was that he found himself slipping into a ‘headphone disco DJ’ persona. “I think I said the words, and I quote: ‘Are you with me, trees?’” he cringes. “That kind of stuff. I wanted a cheer. Oh and I got one all right!”

Fortunately, the Silent Disco King set up meant that barely anything was different for the band in terms of set-up, gear or performing – which was handy given that there was no time for a rehearsal.

“We did absolutely nothing differently,” he remarks. “We just showed up like any normal festival gig – pretty much plug and play, just a quick line check. It didn’t really feel any different – and this added to my doomsday thinking: ‘they are going to turn it on and it’s not going to work’. But all that happened is that the guy that was broadcasting out from the headphones took the feed from the normal sound desk. So the stage guys ran it as a normal live set on the stage, and just took the feed and gave it to the headphone guys, and miraculously it just seemed to work.”

Pert had to eat his naysaying words to such an extent, that he proclaims that it was one of the band’s best-ever gigs for stage sound. “We didn’t have that huge wall of bounceback sound from out the front from the big speakers, and no bleeding out the back of the speakers – we just had the monitoring. Even though it was turned down, it was plenty loud for us. It was one of the clearest I could hear,” he enthuses. “I could hear all of the instruments and our voices – basically I looked like a bit of an idiot because I had been constantly telling everyone that this wasn’t going to work, and it just did – it worked better than a normal gig. We’ll just have to become a headphone disco band I think.”

This year marks the fourth time that Thrill Collins have played at various stages at Glastonbury, although this is never as hedonistic as one may imagine: “Genuinely, we commute to Glastonbury, which makes me feel like the least rock and roll person in the world,” Pert sighs.

“We did actually stay over that night, but we left at 9am the next day…”

Following a mini UK tour in March, the band are looking ahead to another towards the end of this year. “People usually can’t really see us unless they pay £150 for a festival ticket, so we do our own tours. It worked really well: all but one sold out, and that was plenty full.”

Joking aside, the band works with the venues they perform at to encourage a more representative split of male and female artists on the bill. “We did it on the March tour where all the venues are organising the support acts by making sure that there has been a 50/50 split between male and female artists. We never, ever play with or after any girls – why is that? And that worked out amazingly – we had great people support us that we didn’t know of beforehand – but we know of them now. We’re doing that again soon on the tour, and I'm sure we can find loads of more amazing people.”

Let’s hope Phil Collins doesn’t take them up on their challenge in the meantime.