Who Is Whipped Cream?

A life changing accident on the ice saw figure skater Caroline Cecil turn her attention to the world of EDM. Reinventing herself as DJ and producer, Whipped Cream, Cecil now channels her inner genius into her music.

“I fucking love my music,” says EDM artist and producer Whipped Cream, immediately apologising for swearing. Real name Caroline Cecil, the Canadian native can be forgiven for the amount of F-bombs dropped in our interview, because it all comes from a place of passion, especially considering that she found her way to music at a time when she felt the most lost.

Before finding her niche producing and playing hip hop-influenced dark bass music, Cecil was a competitive figure skater who trained for the Olympics, but after a debilitating accident on the ice she was forced to give up the sport and find a new passion – although the love of music was always there:

“When I was super young, I always had the music cranked up and I’d be dancing and singing. I couldn't sing in key, but I just absolutely loved music. I got on the ice when I was about four or five for the first time, and I completely fell in love with it to the point where I was hardly going to high school. I obviously did graduate,” she adds quickly, “but I really did spend most of my days skating or training.”

Cecil had almost saved up enough money from her three part time jobs to buy some new skates when a bad fall changed her course:

“I was practicing triple toe loops and I fell the wrong way. I instantly knew something was wrong,” she remembers. “The doctor told me I might not walk normally ever again – he just told me how it was.”

Happily, she recovered and moved to a farm in order to train with a new coach who specialized in left handed skaters – “I also skated left handed which is fucking weird because I'm right handed,” she laughs. “I gave it about another year and I just wasn't happy. So I stopped and I had no fucking idea what I was going to do. [Skating] was my whole life – I didn't care about anything but this – but I just knew in my heart that I wasn't happy doing this anymore.”

Feeling lost, Cecil and a friend took a road trip to Sasquatch! Music Festival at The Gorge Amphitheater in Washington, and her new calling found her:

“It was the most unreal experience for me,” she recalls. “There was one particular act that I saw, and about 15 minutes into his show I had this overwhelming feeling...I was like, ‘holy fuck, I want to I want to do this!’ I also wanted to provide this feeling that this person was providing to all of these other people. I looked around me – I was completely sober – and tears were pouring down my face. I had never felt so accepted and so full of something I can't even describe.”

Cecil’s mind was made up: she made her way back home and set about learning how to make music. Looking back, she considers the accident to be a blessing in disguise.

“I totally found a way more clear path,” she explains, speaking rapidly and with an infectious enthusiasm. “It's crazy – all these magical things and situations happen. I can't even explain them anymore because I'm so in flow and in tune with my inner…” she trails off. “I call it an inner genius – when you finally find that thing. Everyone has it – you have it, the people reading to this interview have it. When we find something we love, our energy comes out. I never experienced it until I found this.” 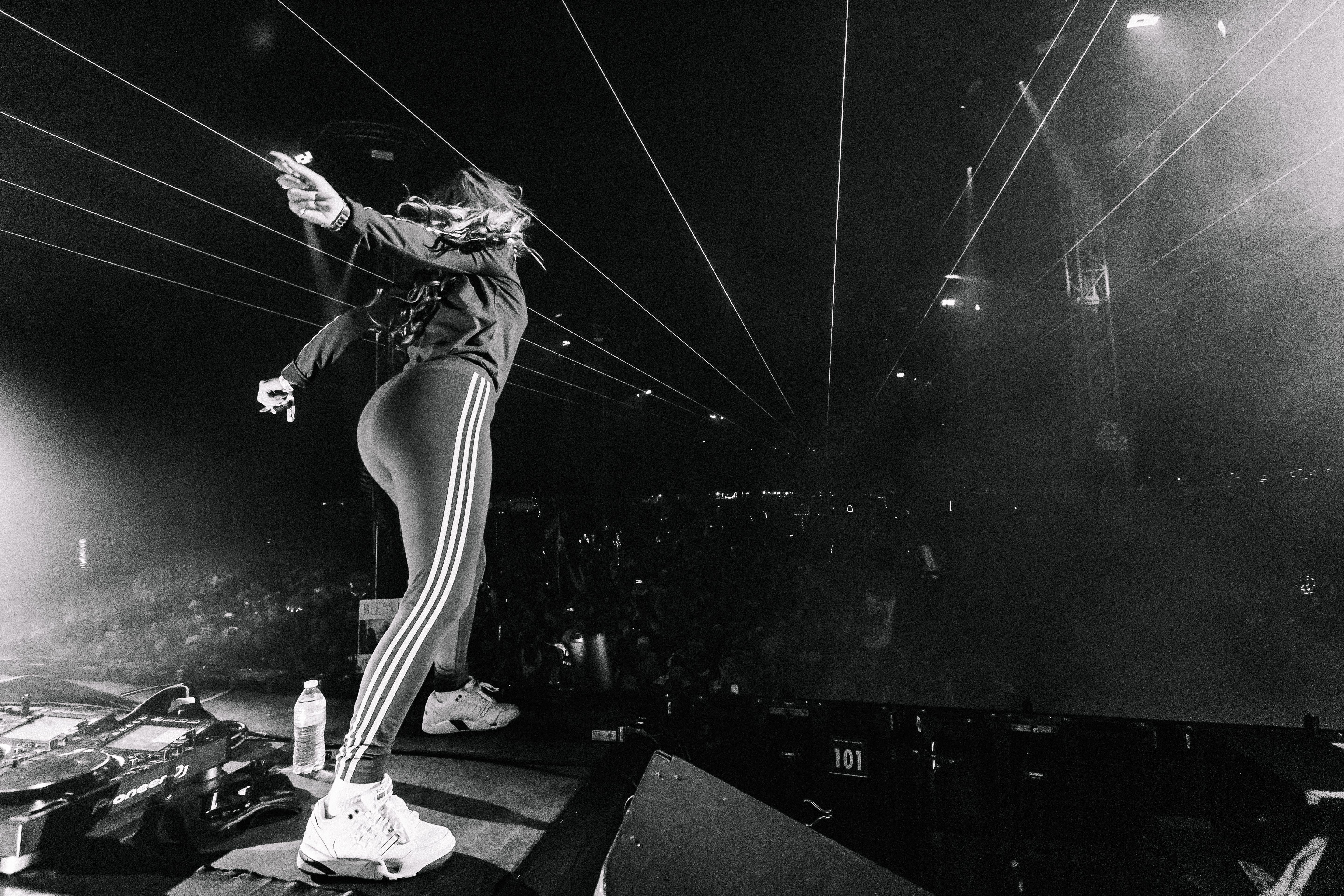 I call it an inner genius – when you finally find that thing.

Cecil knew for certain that the DJ/producer life was the one for her when she finished her original track, Suffocate.

“I'm smiling so much because I haven't heard that record in so long,” she says. “I remember the day, and it felt so fucking amazing. First of all, the record Suffocate was first called Underwater But I'm Still Breathing, and it was a record that had true intention behind it. I was so frustrated and upset with all of the shit I was facing as a woman in the industry.

"I literally felt like I was underwater but still breathing – they were trying to drag me, but I'm gonna keep fighting and I'm gonna go above water. I ended up naming it Suffocate because it's about feeling like you can't breathe, but you're gonna keep going. And the record itself – it's super cinematic but it's still got a groove, you know? It’s kind of trappy and it's got a very experimental, innovative bass that I chopped up with the sample.”

Speaking of the music industry being male dominated, Cecil has been very outspoken about this throughout her career:

“I think that it's important to speak out. I've actually been notorious for speaking out. However, I'm learning that what others say and think about you, it's not you – it is their perception,” she stresses. “It’s super important as a woman in the industry to know that. I used to think it's so important to speak on every little thing when you're treated unfairly – and I did it. Guilty as charged.”

As she matured, she realised that all this was doing was taking away from her time to create, and she now picks her battles.

“Yes, being a female producer in a male-dominated producer game is not the easiest thing. However, it doesn't define me. If you're a female reading this, I'm not saying to bite your tongue. If you feel like you need to speak on something, then fucking speak on it. Because if you don't speak on it, other women who are facing the same thing you're facing today might not have it any easier if we don't speak on it.

"It’s a tug of war with me because sometimes I'll be the punching bag for the next woman to come. But then I'm like, this is going to take two weeks of heartache because I spoke on something. I just let it pass me now and know that that's nothing to do with me; I know what I'm doing. I know my purpose and my intention. I'm just gonna keep doing what I do and live in light and love and like happiness.”

Recent hip hop-heavy track, I Do The Most (ft. Lil Keed) saw Cecil challenge female stereotypes in the song’s music video, which she stars in as well as producing the track. Commenting that the song was “super fun to make,” Cecil is excited to merge electronic sounds and hip hop in her production:

“I'm not trying to make anything generic; I want it to always sound like Whipped Cream still,” she points out. “I'm expanding my sounds. I am super proud of the record and the video. For the video I was really inspired by Rihanna. I wanted it to be a woman in control, where the woman is running the show.”

Before you roll your eyes at the idea of a lingerie-clad Cecil writhing around in a pile of money on a giant bed, she urges viewers to look closer:

“When you look at it from a deeper perspective, the tables have turned and the woman is in power. I'm the one throwing the money. I'm the one throwing the gun. I'm the one standing while he's kneeling – and it's not to have power over men. That's not what I was trying to do here. I was fully, creatively in charge of this video; from the look, to what he's wearing, to what I'm wearing, to my hair and makeup. Even the room is exactly my vision coming to life. When you quickly look at me, you're like, ‘Oh, she's using sex to sell herself,’ and who gives a fuck if I was using sex to sell myself? That shouldn't matter. It's not about that.”

During lockdown, Cecil has found a sense of peace and balance through meditation, and has started to notice a transformation within herself:

“I just feel so freakin creative right now,” she enthuses. “It sounds crazy, but I needed everything to stop for me to realise how important it is to take care of myself before anything else. Then my creativity will flow naturally as it's supposed to when I'm not overdoing everything.”

Working on her upcoming EP, Who Is Whipped Cream? is currently keeping her busy. Cecil says she is very much living in the now:

“I'm literally just creating whatever I want every day,’ she says, happily. “I can watch a horror movie and an hour later, I'm on my computer creating some cinematic music, or the other day I was watching a house stream and then I went and I wrote a house song. I would never do that before, so it's been super fun – it’s experimental right now.”

On the EP’s name, she says that she doesn’t feel that people have got to know the real her yet:

“People don’t really know exactly what I am yet, and I think that this body of work really showcases me. When you listen to the first record to the last record on the project, you do start getting a vibe of my past influences to where I am now, to where this potentially could go. It keeps the listener having a question mark, but for me it solidifies a lot.

Is Cecil ready for it? Absofuckinglutely.