Felix Free on Rocketship Theory: "It’s about my rites of passage & leaving everything I knew & loved"

Felix Free explains how he went from a group of “10 freaky hippies” touring the West Coast in a school bus converted to run on vegetable oil to a spiritual rapper and family man living in upstate New York.

“I started rapping in 1993, in ninth grade,” recalls Free from his home in rural upstate New York.

“My older brother had friends who were producing music at the time. It was serious gangsta rap as this was the peak era of songs about 40-ouncers and smoking blunts, but what I gravitated to were the skills of freestyling, beatboxing and dancing. I’ve loved hip-hop culture since it first hit L.A around 1985. But in ’93, something just grabbed me, and I ran with it.”

In the early 2000s, Free was doing social work in Hollywood with the homeless and runaway youth where he met J Brave – “I used to give it to him on the basketball court,” he chuckles.

“We were playing one day and some beats came on and I just started freestyling. No one knew me at the time. I had a good job and wasn’t interested in rapping professionally. But J wanted to do music with me. One day, he just hit me up and I said, ‘Okay, you take a job at this centre helping kids with me, I'll start doing music with you’.”

J Brave took the job, and Free stayed true to his word. The two quickly became friends and moved into an apartment in Venice Beach where they started recording together.

“We moved right above a really dope artist named Myka 9 from a group called Freestyle Fellowship,” he says. “They are historic in terms of freestyling – they took the rap improv game in L.A to a higher level. It was Myka that pushed us to form a group.” 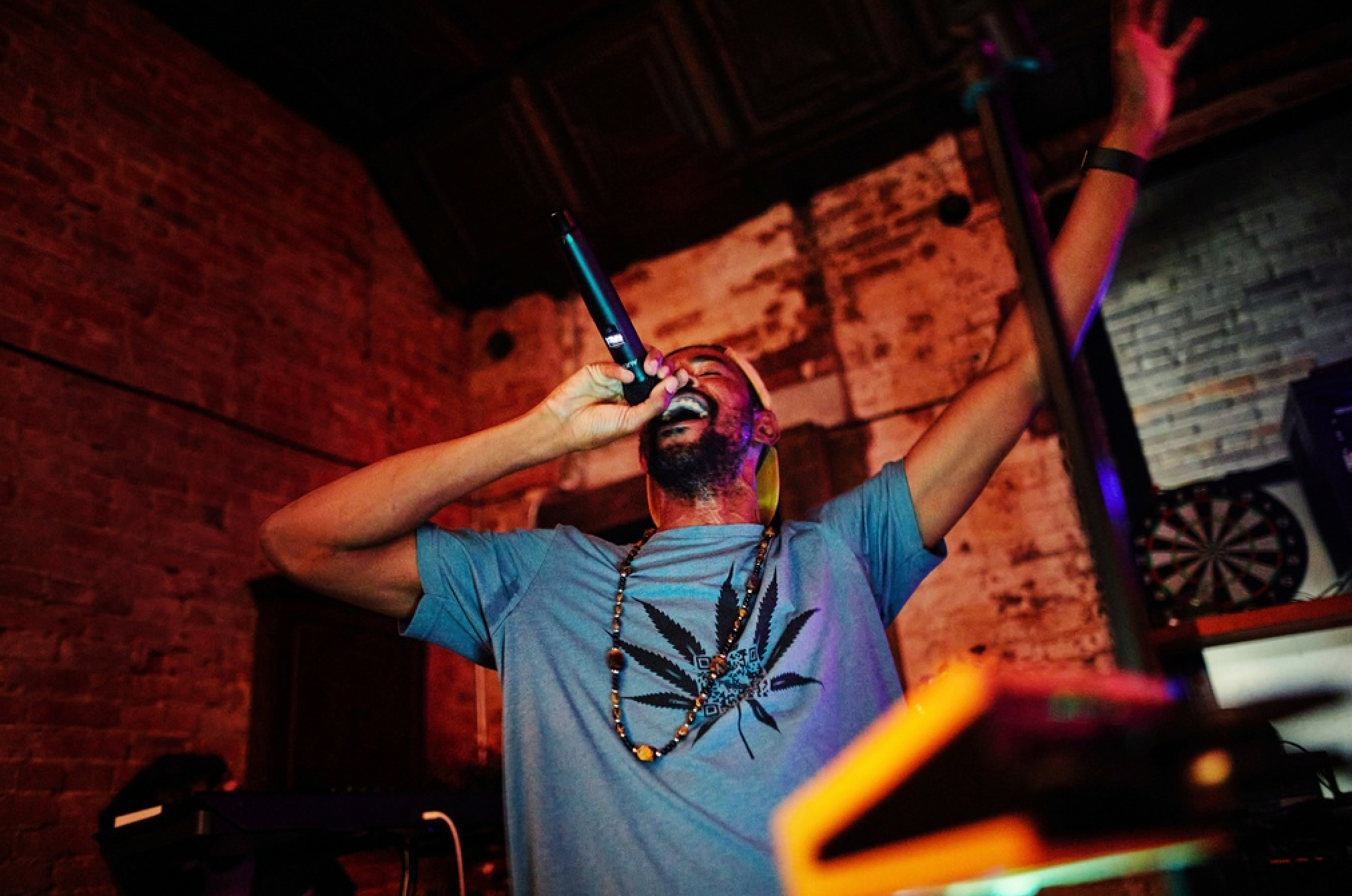 Rocketship Theory was an antidote to my seasonal depression, because I’d never lived through a real winter before.

The group went on to become funk-folk-hip-hop ensemble, Luminaries. “Myka said we were just spittin’ out light with both our rhymes and our work,” Free smiles. “Once Myka put his stamp of approval on our stuff, it took off from there.

"We added a lot of live musicians to the group and wound up being 10 freaky, dirty hippies touring the West Coast in a school bus converted to run on vegetable oil! We had a good run but as bands do, we got older and seasons changed.”

That brings him to where he is now: happily married with children in rural upstate New York, which, after over 10 years on the road, was quite the culture shock:

“Tell me about it! There are not a lot of people here who look like me, if you know what I mean. So, for one, making the album [Rocketship Theory] was an antidote to my seasonal depression, because I’d never lived through a real winter before.

"But I wanted a place to be a good dad and husband, so using music therapy as a tool, Marv Ellis [producer and engineer] and I started talking about the spaceship as a metaphor for a journey. Marv and the Free Creatures produced every aspect of it,” he adds.

“It was mastered by Nine Theory. Emily Turner is all over it on upright bass. Myka 9 is on a track. Anthony Brewster is on a track, so is the amazing country singer Cassandra Lewis.”

I’ve loved hip-hop culture since it first hit L.A around 1985.

Free describes himself as a “spiritual rapper”. Always precise, always positive, but never too polite, his words have explored themes of world peace, hope, justice and the oneness of humanity – poetry that surely helped him earn an opening slot for fellow wordsmith and rapper Matisyahu. Free’s album, Rocketship Theory, frames his personal growth as a journey through outer space:

“It’s about my rites of passage, about leaving everything I knew and loved in L.A and moving to effectively the woods of upstate New York,” he nods. “It starts on Earth, with liftoff, and the songs represent stages as you get older and go through rites of passage. My big one was moving East.

“There’s also my name,” he shares. “I used to go by ‘Freewill Luminous’. In many cultures, once you’ve reached maturity, you get to name yourself. My government name is Felix Harris, and I like the first part of that, so I combined it with my nickname ‘Free’. That reflects a new place I’ve come to.

"In this way, each song details all the things I had to do to cope with a challenge. The final song is Blip, which refers to when you’re finally well on your way. No one can really figure out what you’re up to and so they make assumptions. You know where you are, but on their radar, you’re just a blip because they can’t conceive of how much you’ve grown.” 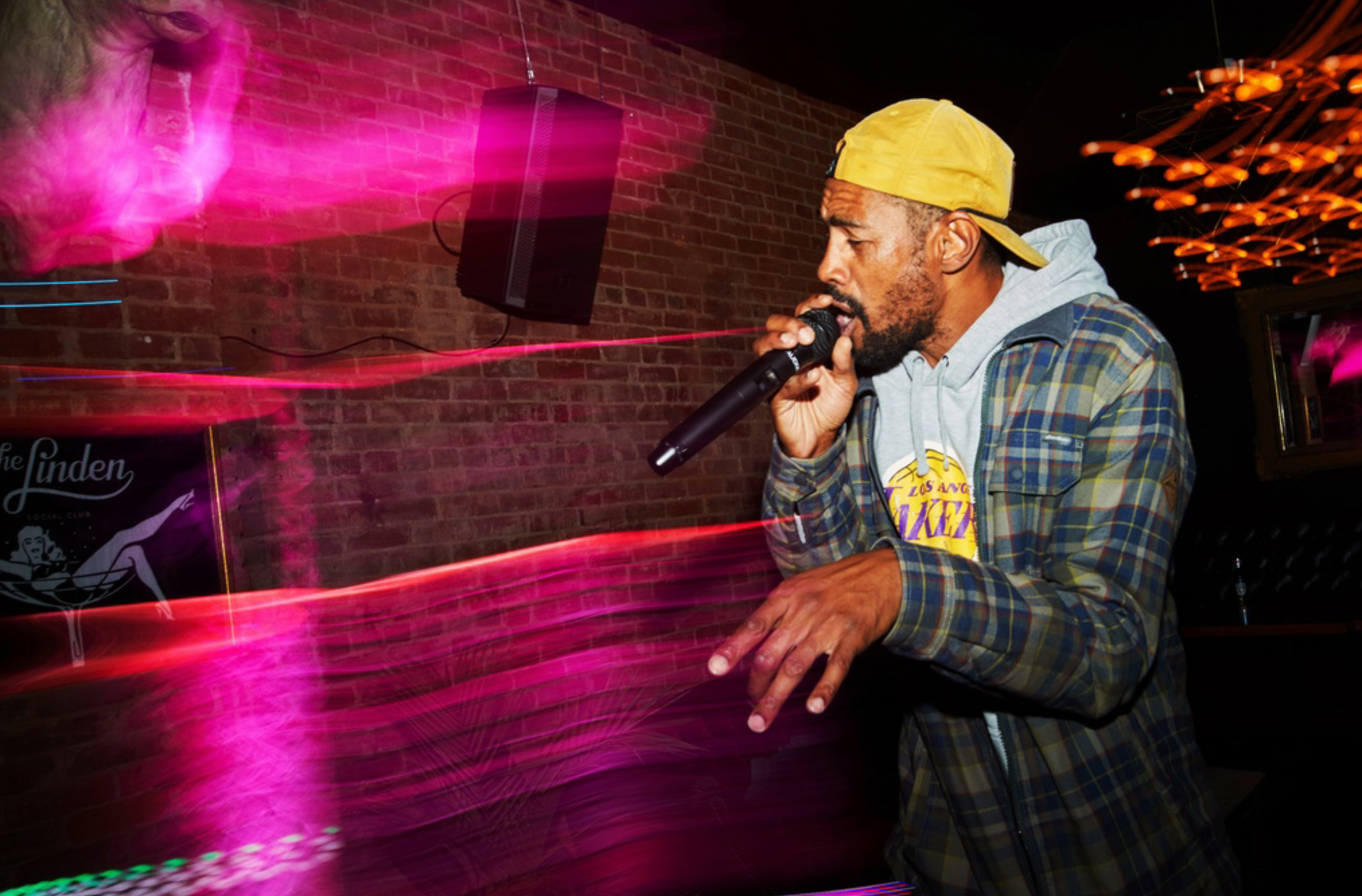 I’m a very animated performer onstage. I cannot stand in one place in front of a mic stand!

Tracking vocals a continent away from Ellis’ studio, Free searched for the perfect vocal tone. Having used Audix mics onstage, he finally navigated to the AP41 wireless version of the OM5. It had been his live mic of choice, so not only was it already there, but he felt it captured his voice better than his studio mics.

“Marv had been using a legacy Audix wireless mic onstage that I think is no longer really allowed in terms of radio frequencies, but it impressed me right away,” he explains. “We were looking at my live shows maybe three years ago, really breaking down the board tapes and seeing what might work better for my voice.”

Being able to move around on stage is key for Free:

“I cannot stand in one place in front of a mic stand! I had been looking at some other big names in wireless mics, but Audix just struck me as a better-built product. When I was on tour with Matisyahu, there were a few dates with some huge stages. If that space is there, I’m gonna run all over it! I even ran out into the crowd several times. I didn’t hear one dropout or one pop and the audio quality didn’t change.”

Audix’s OM5 dynamic vocal mic is his weapon of choice on stage, which he says suits his distinct voice perfectly:

“I can have a nasally voice sometimes,” he admits. “The OM5 doesn’t make it sound more pinched. Instead it compensates for that by picking up the bass of my voice really well, not just the mids.”

I can have a nasally voice sometimes. The OM5 doesn’t make it sound more pinched. Instead it compensates for that.

He also used the OM5 to record Rocketship Theory’s Orbit and Blip.

“I was recording vocals into Logic Pro to send to Marv. Keep in mind that I was learning to record and then digitally transferring tracks to Oregon where he was producing it, adding music, all that. We were never once in the same room.

"I decided I’d A-B the OM5 with my studio mic, which shall now remain nameless. With a pop filter on it, the Audix just sounded better. For one, my vocal didn’t need a lot of EQ or compression after the fact.”

“I’d bet we’ve used Audix vocal mics on more live shows than any band I know,” interjects Ellis. “What we liked about Felix’s OM5 on the tracks he sent us is that he found his voice. His delivery – everything just came together.

"We were trying to figure it out together, because Felix is a stage performer first, not an engineer, and I’m trying to get the best tone from someone across the country.

“We’d started working on the album over a year and a half ago,” he furthers.

“Finally, he sent me those last two songs, Orbit and Blip, and everything gelled. The difference was that on those tracks – he had that Audix mic. Over the course of the album, Felix taught himself how to record, and in terms of his vocal tone and performance, it was like those last two tracks were the goal the entire time.”