Marvel's Guardians Of The Galaxy: Behind The Game Score

Multi award-winning, BAFTA and Ivor Novello-nominated composer Richard Jacques metaphorically dusted off his Walkman to get in the right mindset for his latest project: scoring Marvel’s Guardians of the Galaxy game, which melds ‘80s pop and rock masterpieces with gameplay to create an innovative interactive gaming mechanic called the Huddle. He explains how three distinct musical styles were tied together in the soundtrack: an epic orchestral score, an all-star mixtape of licensed ‘80s tracks, and an original rock album created just for the game.

Music is intrinsic to the Guardians’ franchise; how did you ensure it was a key part of the gameplay experience?

When we first started looking at how we were going to score the game, myself and Steve Szczepkowski were discussing what we needed from the score, because we knew that we would be using some licenced music tracks and that they were gonna marry up together. Music is a very big part of the Guardians’ DNA, from the movies and comics and animated series, so right from the get-go, we knew we wanted to create a very epic orchestral, grandiose, intergalactic symphony to accompany the Guardians and the player across the galaxy in this very strong, story-driven game.

Right from the beginning, we wanted to use very strong themes, both for the Guardians themselves and for some of the other characters that you’ll meet along the way, specifically for some of the villains as well. But we didn’t want to put too many themes in, because in my opinion as a composer, if you put too many in, you dilute what’s there. So we stuck to about four main themes, and there’s a couple of motifs that pop up every now and again for specific bits of the game.

In terms of musical scope for an entire project, it’s certainly one of the biggest ones out there.

Steve and his writing partner Yohann Boudreault wrote a full rock album within the game, because Star-Lord in our universe is also a band. The character Star-Lord already has it on the back of his jacket – that’s his inspiration and it’s his favourite band. In terms of musical scope for an entire project, it’s certainly one of the biggest ones out there that I’ve seen, because you’ve got an almost six-hour epic orchestral score, then you’ve got a whole rock album, then you’ve got 30 amazing licenced tracks from the ‘80s. So in scope, it’s pretty big!

How did you weave in the ‘80s soundtrack with the score?

It works really well because Guardians of the Galaxy has that fun element, and myself and the game team really wanted to recreate that. Quite a lot of care was taken as to how the score and the licenced tracks integrated with one another. So that’s not necessarily in combat, but you might be in a cinematic sequence where there’s a bit of narrative explaining the story, and you might have a piece of licenced music that then goes into my score. I took great care to make sure that it’s a seamless transition. So you might be playing Tears for Fears or something, and I start my cue in the same musical key and tempo, so there’s a very seamless transition. You might even get a slight echo of the licenced track that played previously in my score. 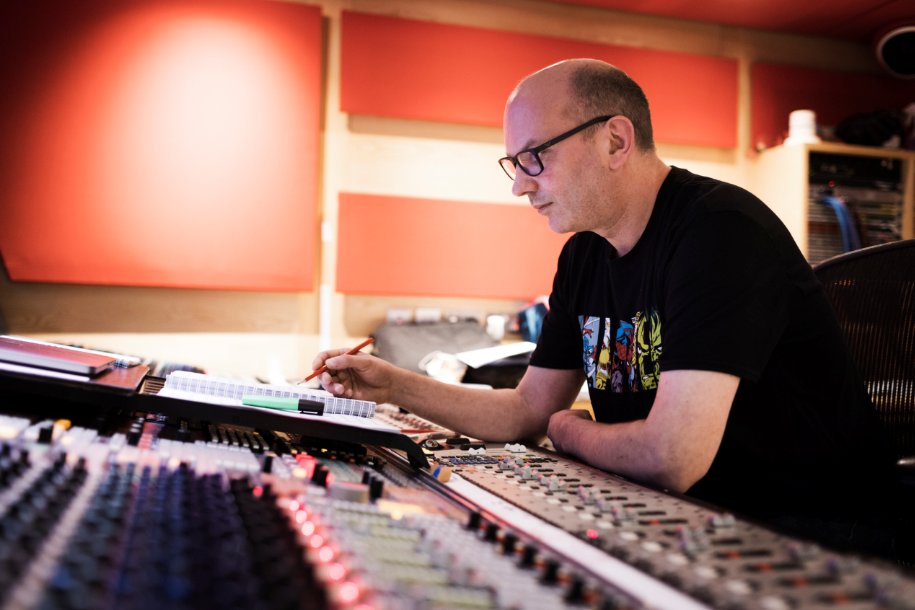 The game’s Huddle feature takes the licensed soundtrack further by allowing players to play an ‘80s song of choice on Star-Lord’s cassette player to inspire the Guardians while fighting. Tell us about this...

What happens is the player will build up a huddle bar, and then when that’s ready, they can activate it, and Star-Lord will have a team talk with the rest of the Guardians. He has to work out what they’re saying and gauge whether they need a speech that’s going to lift them, or if they’re being a bit too brash, then he needs to calm them down a bit. When the player’s made the right choice, it goes back into the gameplay, and he hits play on his Walkman, and you get an array of these amazing ‘80s hits.

Sometimes my score might be playing during the first part of combat, and it’s very dramatic and epic, and then if you use the Huddle mechanic in a specific level, you might hear Rick Astley or something like that. That’s just part of the fun of Guardians – that dichotomy between the score and the tracks, and it works brilliantly.