The Super Mario World soundtrack has been remade without any compression. Using data from the Nintendo leak last year (which contained the original source code to Super Mario Advance), retro gamers have recreated uncompressed and lossless versions of the game's original soundtrack.

Since that Game Boy game reused samples from Super Mario World, people were able to use it to track down the uncompressed samples used in the original Super Nintendo Entertainment System (SNES) title.

Gamers have always considered there to be something not quite right about the Super Mario World’s soundtrack. Because of the limitations of the SNES hardware, music was often compressed, losing much of the wonder and nuance present in the original tracks.

Thanks to the work of intrepid restorationists and the Nintendo ‘gigaleak’ of data last year, we are now able to hear the original lossless and uncompressed tracks from Super Mario World.

The restoration project, which seems to be led by a Twitter user known as ‘The Brickster,’ found the original source code for Super Mario Advance in Nintendo’s 2020 data leak.

Using this information, The Brickster and others meticulously recreated the game’s soundtrack using the original synthesizers and instruments. The results are uncompressed and lossless versions of the famous tracks. 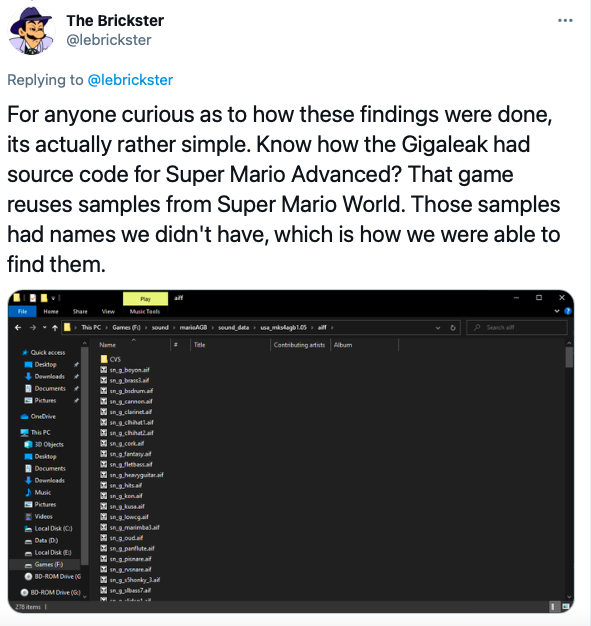 The new tracks sound noticeably different from those heard on an original SNES. After all, these are made with uncompressed synth samples rather than the console’s sound chip.

The Brickster notes this, stating that this is more of a “what if” project exploring what the game could have sounded like if Koji Kondo (the composer) hadn’t been limited to the Super Nintendo’s hardware.

As The Brickster explains on Twitter, this isn’t simply a case of taking the tracks from the original game and cleaning them up. Instead, creators like 'Moola', 'michael02022', and ‘unknown’ are tracking down the original samples used to produce the tracks and rebuilding the songs, without having to compress them to fit into the SNES console’s 64kb of audio RAM.

“For anyone curious as to how these findings were done, it's actually rather simple,” tweeted The Brickster.

“Know how the Gigaleak had source code for Super Mario Advanced? That game reuses samples from Super Mario World. Those samples had names we didn't have, which is how we were able to find them.

“Thanks to a breakthrough I had, regarding the Gigaleak, we were able to find proper names for many instruments for Super Mario World, which led to some friends finding the source for those samples. With these source samples, they are now restoring the OST for Super Mario World.”

The full soundtrack can be found here.