A first of its kind platform, the United Battle League is a newly launched concept designed to take martial arts and integrate live fights within a virtual environment, complete with life bars and the kind of surrounding worlds typically found in the realm of video games. But how exactly does it work? To find out more, Headliner spoke to Steffen Kellner, managing partner at Ignore Gravity, one of the the firms behind UBL, about how the concept came together and the Riedel infrastructure that underpins its production.

Having served in various management roles across the globe with Red Bull prior to joining Ignore Gravity, Kellner had built up significant experience in the art of not only conceiving new ideas for innovative events, but also in executing them. When formulating the blueprint for UBL in collaboration with 2020 Armor co-founder and CEO, Ali Gharfour, the focus, he explains, was very much on maximizing the more visceral elements of combat sports and applying the same levels of excitement to their setting and presentation.

“Taekwondo was suffering from the scoring system, which was leading to very technical, unattractive fights, so 2020 Armor created this armour with sensor technology, which registers not only when you receive a hit, but also its intensity,” said Kellner of the UBL’s origins. “We then translate this into a life bar, which makes the scoring very transparent. We had a look at the market and apart from WWE, much of the market is positioned similarly. They are cage fights and it’s very one dimensional. We thought that we should differentiate ourselves.”

Given the company’s tech-driven background and the incorporation of features such as the armour and life bars, the team decided to develop something that “hit the sweet spot between gaming and martial arts”.

“In early 2020 we visited Thomas Riedel – who thought it was a great idea – to tell him we needed support,” Kellner continued. “Then Covid happened, and the world wasn’t really waiting for the next event series to be introduced! My experience from events is that, of course, audiences are great, but before you make significant money you have the high costs and high efforts of bringing people to you. So, we thought we should focus on a competition series as a media product, then we could be much more radical with the gaming approach, such as showing the fighters embedded in a virtual world.”

Unsurprisingly, the technical challenges not only in creating the virtual worlds, but also the onsite production, were significant, with Riedel playing a vital role in bringing the project to life.

“Nobody has done this before, so bringing the right competencies together is vital,” said Kellner. “You have the guys who developed the virtual world and the guys who do the production onsite and also the media production, and to really sync them was a challenge.” 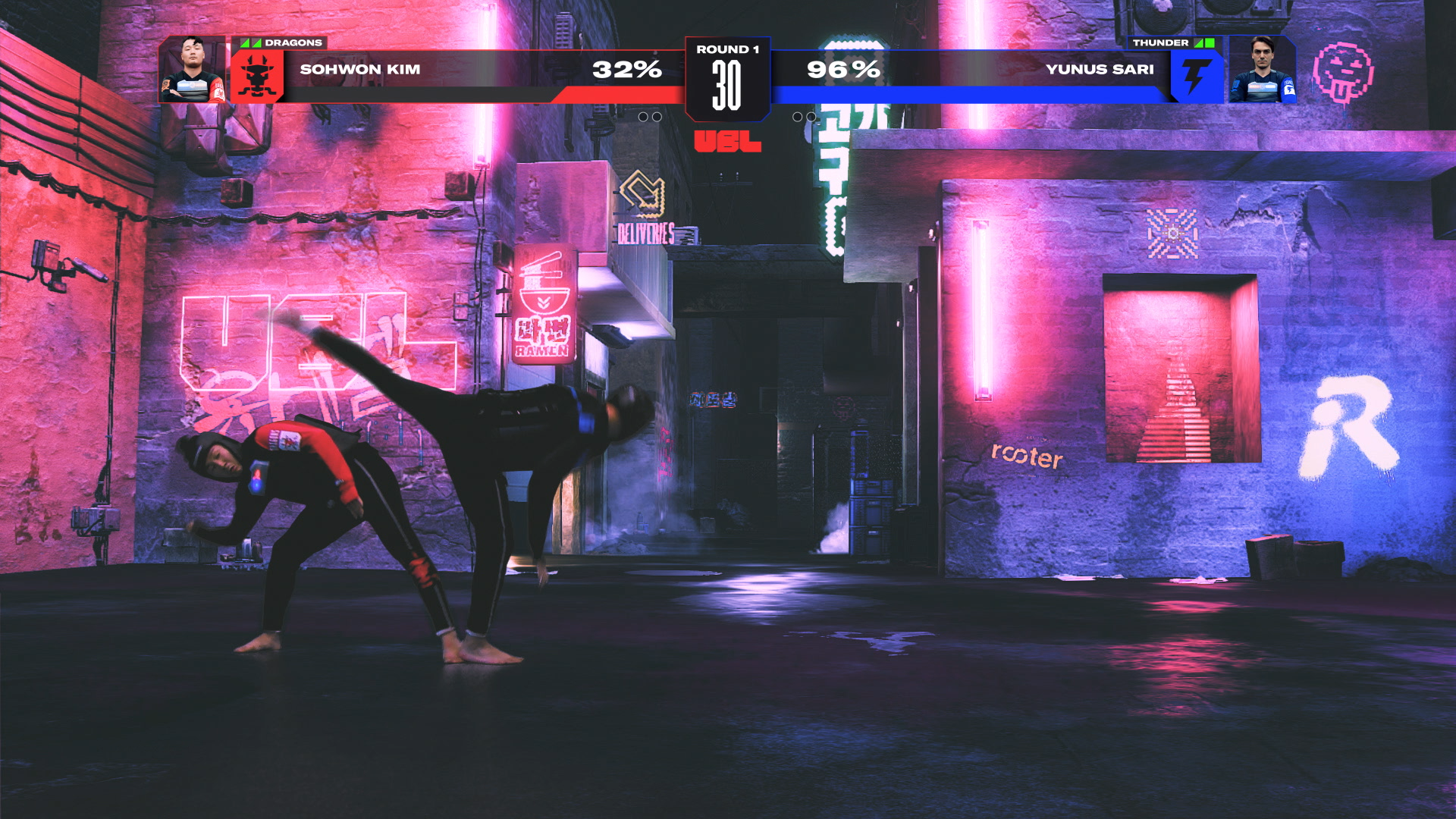 Nobody has done this, so bringing the right competencies is vital. Steffen Kellner, managing partner, Ignore Gravity

For the UBL, Riedel delivered what had to be a seamless and reliable comms infrastructure for the production environment, including Bolero wireless intercom, Artist matrix intercom and DSP-2312 panels.

ETC Paris, a member of the Riedel family of solution providers, has technically implemented the virtual set with their media server, while Wige Solutions developed the visualization concept.

Thomas Riedel, also an investor in UBL, told Headliner: "It's always great to see how our technological innovations help create groundbreaking new sports and entertainment media formats. Bringing together the best of physical and e-sports, the UBL is taking the metaverse concept to thrilling new levels, while opening up entirely new perspectives on martial arts."

The pilot UBL show was published on January 15 on ubl.gg as well as several other international platforms in a virtual world dubbed the ‘UBL Metaverse’. The inaugural event was held in the virtual Cyberpunk city of Hee Mang. With further details still to be announced, the 22/23 UBL season is set to become a series of competitions with seven contests per year, each taking place in a new virtual location with fans able to enter the Metaverse. Fans can select their own avatar, meet other attendees, explore the virtual worlds and watch the fights either live or recorded.

In each competition, there are two teams with three athletes per team. To progress to the next round, a team must win two out of three rounds to win the match.

Currently a virtual-only event, Kellner says that the technology is there to render UBL as a live, in-person event in the future.

“Technically it’s possible to have both,” said Kellner. “The virtual world is brought to life by massive LED screens. We are also talking to investors that run, for example, casinos in Vegas. And we are talking to some folk from Dubai, and when they come to us and say ‘We have a big venue, you bring the show’, there will be no problem. The technical possibilities here are endless. We’re blurring the line between reality and virtual reality.”