Halina Rice on bringing AV worlds to life with L-ISA

London’s Copeland Gallery recently hosted a unique live performance-cum-art exhibition from electronic artist Halina Rice. Headliner caught up with her to discuss her approach to advancing the possibilities of immersive live events, and how L-Acoustics’ L-ISA technology helped bring her sonic vision to life.

“It felt like you had one foot in a gig and one foot in an art exhibition,” Rice tells Headliner as we join her via Zoom at her London home. She’s explaining the concept behind her recent performance at the Copeland Gallery in London as part of her New Worlds project, which is designed to intertwine music with mixed reality visuals and 360° audio. As both a producer of electronic music and a visual artist, she has consistently strived to create increasingly immersive AV environments in which to envelop her listeners. And with New Worlds, she has finessed this vision to its sharpest point yet.

“In 2017 I had an album out through a label called Blurred Recordings, and after that I had been working with a visual designer Yan Petýrek,” she elaborates. “We were really interested in the idea of immersive events, and I had seen a show where artists were projecting themselves live via mixed reality into visuals and I could not figure out how they were doing that in a live environment. So, we studied these videos and realized they were just using a Kinect 2. At that moment I decided this was the type of show I wanted to put on.”

Rice’s plans to begin work in earnest were, however, scuppered by the onset of the pandemic. But while lockdown may have slammed the brakes on any plans to put on such a show in-person, it also provided an opportunity for her to start investigating and researching what might be possible in the realm of live streaming.

“In September 2020 I self-released a project called Spheres, and we created this file where I could be mapped live, even though I was in my living room, into the file and Yan had all these beautiful cinematic camera angles, yet I’d stay fixed to a platform in this universe.

“Then, for the last release, I started working with a new designer. We wanted to do something that was audio reactive, so every time I released a record it had an entire visual environment and story around it. Each one is almost like a mini album, but really my heart was in taking this live. I did a couple of shows to explore how we could offer immersion for the audience.”

It was at this stage that Rice called upon the services of L-Acoustics and its L-ISA object-based sound technology to help enhance the immersive audio aspect of the show. 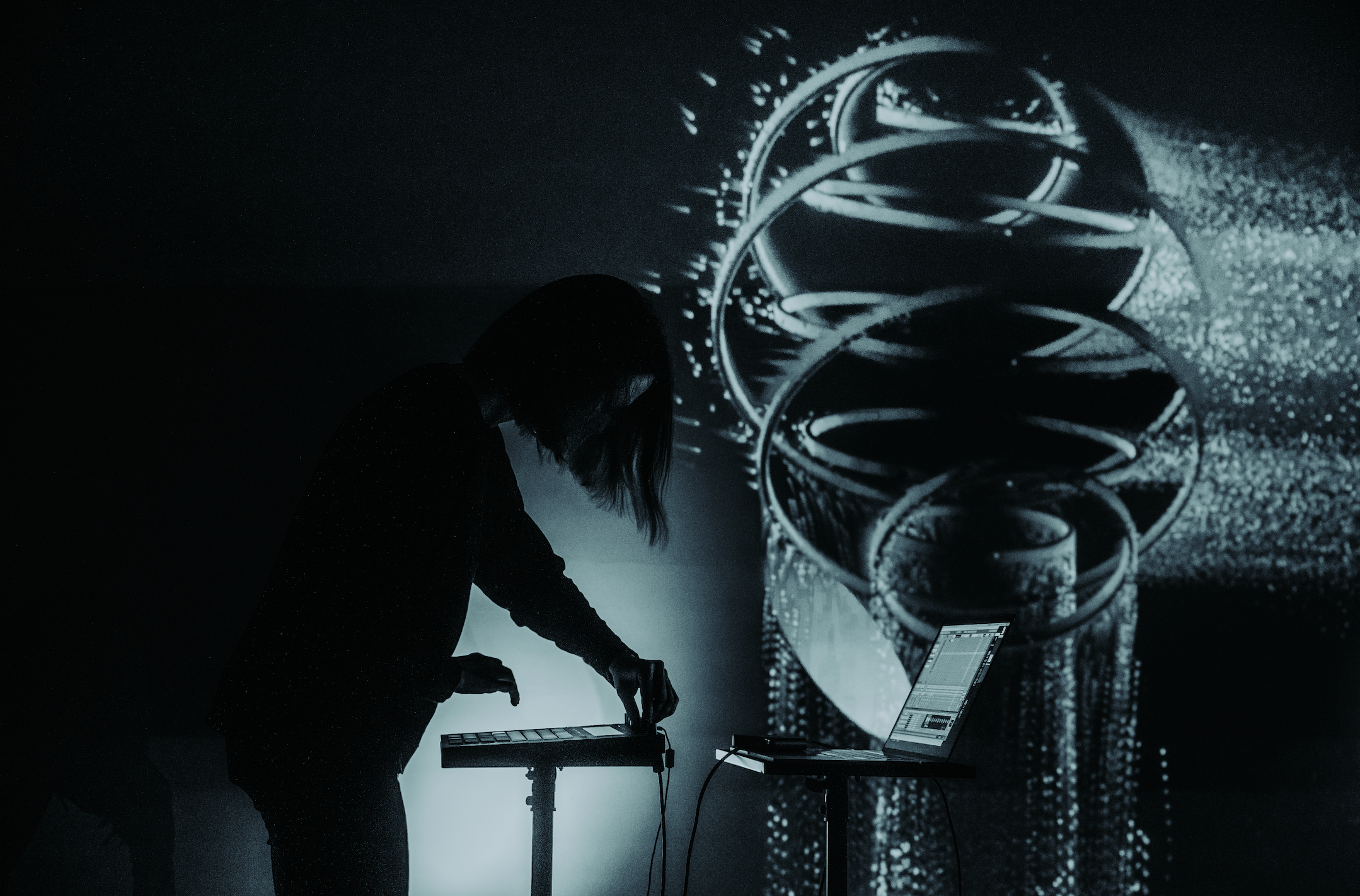 I want to displace people from being in a standard gig environment. Halina Rice

“I’d been working with L-Acoustics since 2019 when I did a show at Abbey Road,” says Rice. “Within two days I reprogrammed a show I did there in the L-ISA system and stayed in touch with them. Then they reached out because they had just launched L-ISA Studio software, which includes their binaural monitoring system. This meant that rather than having to be in a studio to mix, I could do it at home, which is amazing because when I was programming for Abbey Road I didn’t know what it sounded like in the room until I got into the room.

“I did a couple of shows in stereo, which went well with the immersive visual side, and I thought it would be amazing to do it with immersive sound as well. I also felt I needed to do a show in order to launch this show and have video and photography so I could pitch it to venues and festivals. I wanted documentation.”

The L-ISA design used for the Copeland Gallery performance was based around 12 X8 coaxial speakers in a surround configuration. So how did Rice utilize the technology to achieve the desired effect?

“I use it in a way where I would bounce maybe nine or 10 stems of each track, and each of those sounds L-ISA would refer to as objects,” she picks up. “The software is then connected with Ableton, which is the DAW I work in, and then back into the L-ISA Studio software via use of the L-ISA plugin. I would lay out the groundwork of stems in a scene in Ableton and within each Clip I would define the values for where that object is panned, what its distance is and its width - so how many speakers I want to cover with that sound.

“For the Copeland Gallery show, we had a 12-speaker setup,“ she continues. “It’s not a huge room, it has a socially distanced capacity of about 150. And then within the software I can see precisely where I am going to map those objects. It was a steep learning curve; it was across maybe 14 tracks, which is about nine or 10 clips, each of which I have to define where that sits in the room. It was a lot of hard work but it’s a really magical experience when you see it working.

“With L-ISA immersive, you’re not playing to the front of the room as you normally would. Sounds are coming to the audience from all around, and for a show like this it felt like you had one foot in a gig and one foot in an art exhibition. I just want to displace people from being in a standard gig environment, that’s not what my eventing is about. I want it to feel special. Someone described it the other day as being like somewhere between a rave and an art happening!”

As for the future, Rice is currently in conversation with a number of parties about how to take this iteration of the show on the road.

“I’m talking with L-Acoustics and looking at some more venues,” she concludes. “I’ve been booked for the Sonica Arts Festival in Glasgow, so I’ll be playing there on March 19. But now that I have the footage and imagery from the Copeland Gallery, I can reach out to venues, festivals and promoters.”