What does a touring musician do when all gigs are cancelled? Bassist and vocalist Harmoni Kelley reveals how she’s keeping occupied this year, and why she wouldn’t be without JH Audio and Fender on stage.

Harmoni Kelley should be on tour with Kenny Chesney as the moment. Instead, she’s sipping a coffee in her pajamas for a morning catch up with Headliner from her hometown in Austin. Usually splitting her time between Texas and Nashville (interspersed with numerous tour busses or planes), the usually nationally-touring bassist and vocalist is trying to keep busy.

“I don't do well sitting still,” she says warmly. “A lot of us want to be doing something. We can't tour and we're not going to be rehearsing, so I’ve got to do something – I can't just sit here! So I’m trying to still be creative and learn new things. If I can come out of the other end of this having learned two or three new things, or learned a new skill, then that’s a win for me. That's a great silver lining to the weirdness of this whole pandemic.”

Harmoni auditioned for Chesney in 2014, and has been touring with him steadily ever since. Since all touring has been cancelled, she has turned her attention to recording at home and has been tentatively dipping her toes into the world of music production. Chesney the rest of his band have kept in contact throughout the year – in fact her boss messaged the group a few days ago, remarking on where they should have been playing that night:

“It’s funny to call him my boss, because he's a friend at this point. I'm sure it's kind of driving him crazy to not be touring right now, because he loves it so much and he feeds so much off of that energy. I know it's killing him to not actually be able to play and be out there on stage, because he’s so good at it. You don't know how much you miss it until it's taken away,” she sighs. “You really realise how big of a thing it is in your life.”

A self-taught musician, Harmoni picked up the bass guitar at age 17 and hasn’t looked back. With over two decades of experience both on the road and in the studio, she has mastered the art of playing by ear and understands the importance of being able to lay back, listen and play for the song:

“I asked for a bass and an amp for Christmas when I was 17 and my parents maybe thought it was crazy,” she chuckles. “They said, ‘well that's all we're getting you, and even that is going to be tricky’. I remember going to the music store here in Austin with my dad, which sadly doesn't exist anymore. We picked out a bass and an amp, and it stuck with me. I actually recently bought a Gretsch Catalina drum kit – I'm a rhythm section gal, for sure.

"And I'm self taught: I just sat down in front of the record player or the CD player and started to play along. I never went to music school and I think I took one lesson from another bass player friend of mine here in Austin when I needed to learn how to play slap bass on a particular song. It just evolved from there,” she says modestly. 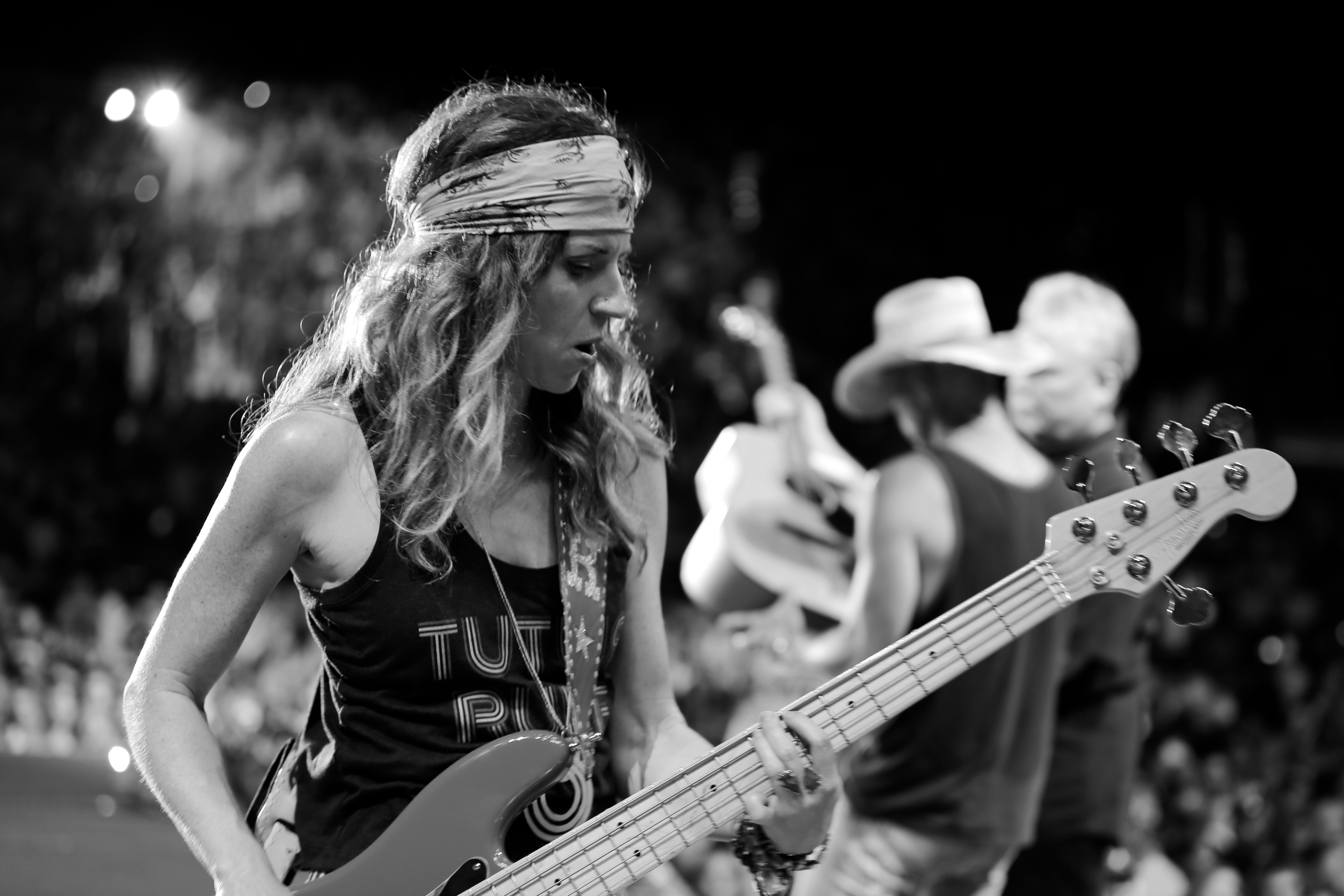 We have to ask; what does a touring musician do when there are no live shows?

“I have this group of bass players on a text thread – most of them live out in L.A,” she answers brightly. “They're more in the pop and rock touring world and play with Pink and Gwen Stefani, so I'm kind of the lone country bass player in Austin. We decided to do these weekly Zoom calls to check in. We did one a few months ago and we were talking about when you're on tour and are super busy, the one thing that you probably wish you had the most is time to just sit, be creative and do your own thing. And now we're all forced into this new world where we have nothing but time.

"At that moment, no one really felt that creative. We have all this time in the world – we're sitting at home in our studios surrounded by basses and amps – and nobody's really creating. I think that's probably shifted, but at that time when it was all new and we were all trying to wrap our heads around what this meant, no one was really feeling that creative. Now, a lot of people are doing YouTube videos from home, some gear demo stuff and live stream gigs. We’re keeping that creative spark alive.”

During her time as a young musician in Austin, Harmoni worked her way up through the ranks and spent time both in the studio and on the road with local legends Fastball, James McMurtry, Slaid Cleaves and Bob Schneider to name a few. Those years proved to be the most important in starting Harmoni down the path of honing in on her craft as a bass player and vocalist. She cut her teeth with bands of all musical genres from rock, pop, blues, funk, bluegrass, country and americana – which has allowed her to easily switch genres for her touring work.

“When I was in my 20s I was just getting going, so I said yes to all these different gigs. I didn’t think, ‘I don't want to do that because it's country,’ or ‘I don't want to do that gig because it's blues,’ – I was just hungry to play. So the style of music was sort of an afterthought – I was so happy to be on stage and to be playing. There have been times when I've thought, ‘I'm not really comfortable playing this Latin funk style, but I'm here and I'm in the gig, and I'm going to do it and I'm going to figure it out’. So that was really great for me, and I feel that could be beneficial for any player.”

Despite all her experience, Harmoni still feels she almost needs to pinch herself when she sees the size of the stadiums she is now accustomed to playing in:

“I don't know what I expected when I started playing bass!” she admits. “That's everybody's dream as a musician – to be playing big stages. I think that my first show with Kenny Chesney was at Bridgestone Arena in Nashville. It's crazy! You can be playing to 60,000 people. Until you're up there doing it, you really don't know what that feels like – the power of that many people that are so excited, and all the energy is going from them directly to you. It's an overwhelming experience and it definitely took my breath away the first time that I was on stage, because you can't prepare for that. It's been a wild ride!” 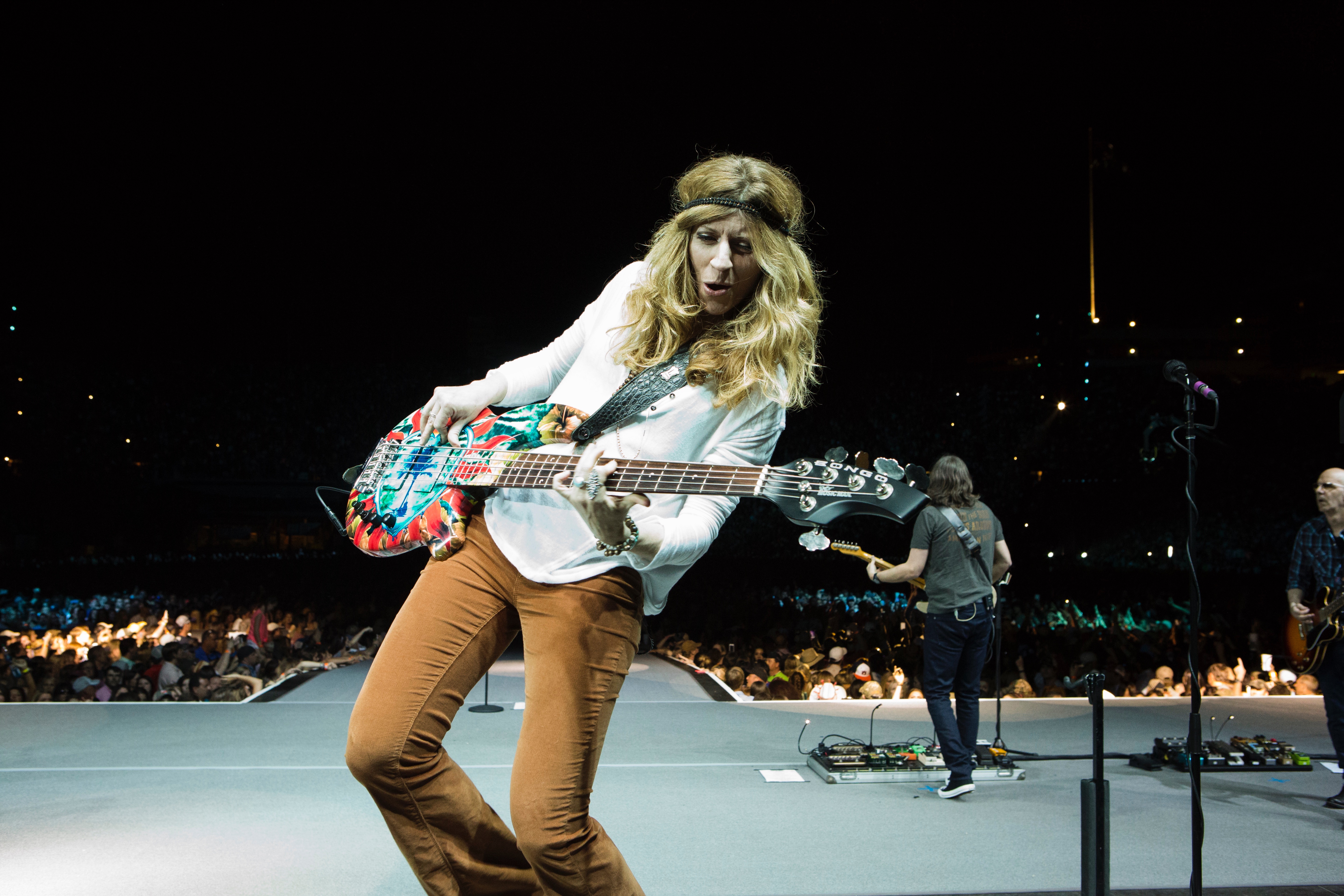 For in-ear monitors, Harmoni likes the JH Audio Siren Series Roxanne customs, which she says lured her in with “the widest frequency range you’ll ever hear,” then seducing her with the first variable bass control IEM cable. Interestingly, before working with Chesney, Harmoni had never used in-ears before:

“The first time I put a pair of those in, they were moulded to my ear,” she recalls. “Once I got used to that feeling of having everything just right there and at a lower volume, they're awesome! I'm singing and playing bass, and there are seven of us on stage, so there's a lot going on in the mix and it sounds perfect from ear to ear. There's an art to that.

"There are different parts of the show where we're all out there on this catwalk in the middle of the crowd, so without in-ears it would just be this cacophony of sound and this terrible soup of noise! If you ever take your in-ears out in the middle of a stadium out there, it feels like you're just alone in the middle of an ocean because you can't hear anything. I can't imagine doing any of those shows without my in-ears, and those Roxanne's are awesome.”