Netflix After Life Review: The Things We Think And Do Not Say

Three years after Headliner interviewed Ricky Gervais ahead of his last ever David Brent & Foregone Conclusion gig, we take a look at what the comedian has been up to since Brent jumped out of the hot seat. At once cynical and sentimental, cruel and heartwarming, sad yet uplifting, Netflix series After Life is a noticeable shift in tone for Gervais, shining a light on depression and suicide, yet ultimately showing us that hope is everything.

It’s been three years to the day that Headliner published its candid interview with Ricky Gervais, where he reflected on the madness that was the David Brent & Foregone Conclusion UK tour ahead of their last ever gig. Taking advantage of the success of The Office spinoff film, David Brent: Life On The Road, the tour saw Gervais provide Brent with what the tampon rep could never achieve: sold out tour dates attended by people that actually wanted to hear his music.

Perhaps it’s a British thing, but we delight in the awkward on TV: whether it be The Office, Peep Show, Fawlty Towers or The Inbetweeners. It’s unbearable, yet we can’t look away. Gervais has made a career of it: The Office, Extras and Life On The Road, to name a few.

Until After Life in 2019, where yes, Gervais plays Gervais-type, Tony (wouldn’t we feel short-changed if we got anything but?) – however the mini series represents a noticeable shift in tone for the observational comedian.

Gone is the mockumentary-style filming and excruciating encounters associated with Gervais’ former work: Tony is a man struggling with depression and suicidal thoughts following the death of his wife, Lisa.

This premise alone perhaps would not have appealed to Netflix, so the crux of the show is that as Tony would rather be dead, as long as he’s alive, he is going to tell everyone and anyone what he thinks of them – after all, he’s always got suicide to fall back on. It’s his superpower.

Nihilism personified, Tony is reduced to an empty shell going through the motions, occasionally offering up opinions like “humanity is a plague,” and that there’s “no advantage to being nice and careful and thoughtful” – although throughout the duration of the series, he inevitably proves himself wrong.

But before he gets there, we see a man that’s lost: eating cold beans straight from the can, downing cereal and tap water from a pint glass because he hasn’t done the washing up, drinking too much, and spending his free time watching home videos of his late wife on his laptop. 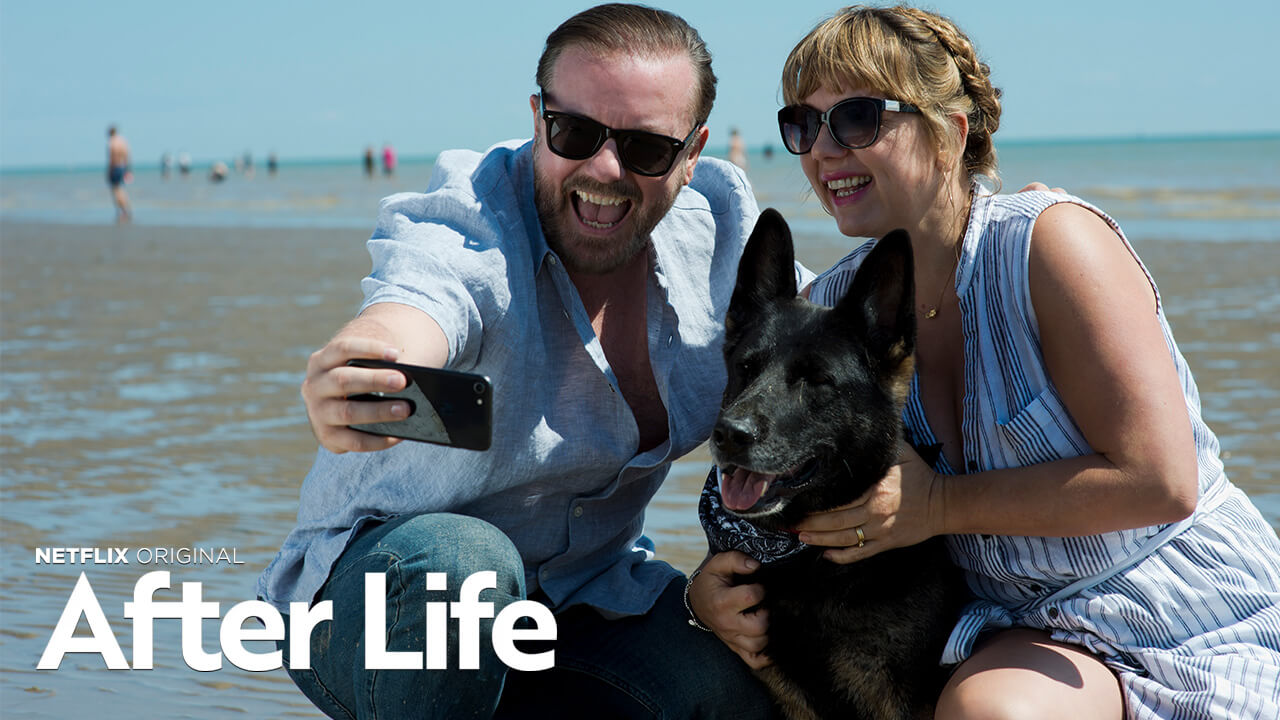 To distract us from dwelling on our mortality too long, Gervais delights in saying and doing what we dare not.

The first episode opens with Tony watching the start of a video his wife has left for him, where from her hospital bed she gives advice on how to cope without her, telling him that she’s talking to her laptop because it’s too awkward to say to his face. Awkward yes, but also painful – because these are conversations that nobody wants to have.

The show’s trailer plays up the humour – Tony giving the finger to a clipboard guilt-tripper, or calling a rude kid a “tubby little ginger cunt”, but where After Life really excels is in its ability to confront us with the truth that we all avoid; the fate that awaits us all that we can’t or won’t acknowledge – yet somehow without making us join Tony in asking: “If we know the ending already, then what’s the point?”

To distract us from dwelling on our mortality too long (best to ignore it, after all), Gervais delights in saying and doing what we dare not – calling a pedantic dog-walker a “cocksucker,” and ordering the forbidden children’s meal before defiantly stuffing it all in his mouth.

As an audience, we relish living through a man free to say whatever comes into his head – we’ve all thought of the clever comeback we could have said, hours after we should have said it, and smirk at our own belated wit. Who isn’t infuriated by the noisy chewer in the cinema, or the loud breather on the train? If there were no consequences to anything, who wouldn’t want to smash a mugger in the face with a can, or even try heroin? These of course are things that we don’t actually want to do, but through Tony we are allowed to give into our morbid curiosities: ‘what if I stood up to a thug in an alley? What does smoking heroin feel like?’

However, as Tony learns, a world without consequences is not sustainable, and it’s not long before he crosses the line, giving money to a drug addict who he knows will spend the cash on buying enough gear to end his own life. Is it a kindness for Tony, who finds an unlikely kindred spirit in a broken, grieving man living out of a garage? Or is he testing his nihilistic theory? 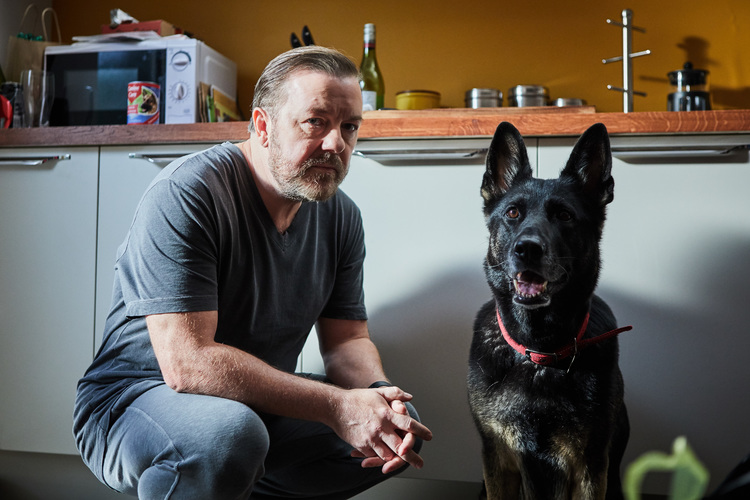 After Life excels is in its ability to confront us with the truth that we all avoid; the fate that awaits us all that we can’t or won’t acknowledge.

After Life strikes a clever balance between humour and poignancy with lines such as “everything moves on, even aids,” and as much as Tony’s depression dulls his senses, at times Gervais’ tongue lashes sharp as ever: “Hot date?” he asks a man who has just slicked down his hair using puddle water.

Grief and depression are nothing new, but Netflix is. Now, everyone is whipped into a frenzy when the new must-see series appears on the streaming platform, after which they migrate to Twitter to share memes about it. (Perhaps Tony is right to question the meaning of our existence after all).

However, with After Life, something extraordinary happened: people fresh off a binge-watch session used their 280 characters to express how the series had made them feel less alone, reminded them of a loved one that had passed away, or acknowledged their feelings of depression and grief.

The usually cynical Gervais was touched with the unexpected outpouring, taking to social media himself to thank people for their kind messages.

After all, you cannot rehearse grief, or know what to do when someone you love passes, and equally as flummoxed are the people around you, illustrated perfectly in a scene when a cocky stage comedian probes Tony for “his story” – and gets it.

That’s not to say that the series can only connect with viewers that are in pain; if we think about it hard enough, those of us free from mental health issues can still appreciate the futility in everything: Who cares about going to the gym five times a week and surviving on miserable salads just to look good on the beach for seven days of the year? Why get drawn into petty office politics, or care about what car you drive, or about anything at all?

The point, After Life seems to suggest, is to find joy in the little things, and to realise that our lives aren’t just about us, but about us making other people happy – a sentiment that fellow widower, Anne shares with Tony:

“It’s not all about you. We’re not here just for us, we’re here for each other. Happiness is amazing. It’s so amazing it doesn’t even matter whose it is.” 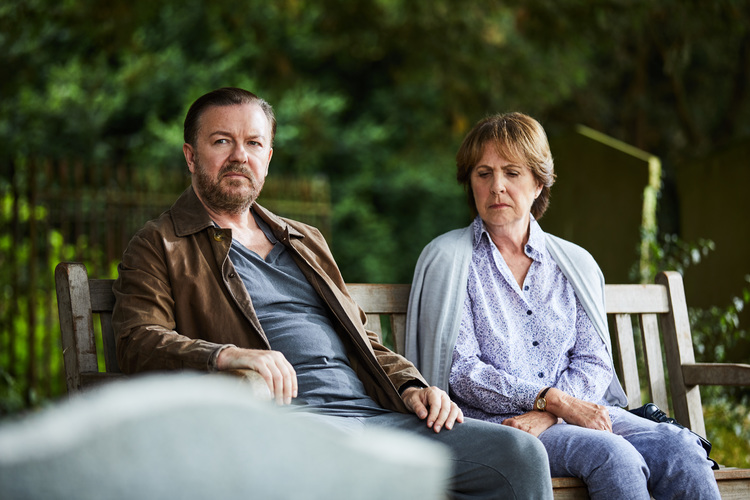 Happiness is amazing. It’s so amazing, it doesn’t even matter whose it is.

Attitudes to depression, suicide and mental health have seen a noticeable shift over the last few years, with everything from mental health organisations, to TV adverts and celebrities encouraging people to break their silence and speak out. Still, After Life represents the attitudes we have grown familiar with, particularly regarding men and mental health.

Gervais fans have become accustomed to what he looks like in the bath, however there’s nothing funny about Tony in his tub: psyching himself up to slit his wrists, he stops when his dog enters the room (the scene resonating with viewers battling thoughts of ending their own lives – admitting they had done the same, or that their pets are often the thing that keeps them going).

When sharing these moments with his consistently terrible therapist, he is consoled with advice such as “you’re not the only mental case out there” and “just stop feeling sad” – the most eye-rolling piece of advice for those diagnosed with depression.

His frustrated brother in law, though caring and understanding, suggests Tony’s suicidal thoughts are a choice: “Why don’t you want to get better?”

And depression is not a feeling exclusive to Tony, he is surprised to find, when visiting delightfully disgusting local oddball, Brian. Desperate to appear in the local paper for any reason, he shows the team of journalists into his home: something straight out of Britain’s Biggest Hoarders. Tony at first mocks him, yet is lost for words when Brian says that he wanted to commit suicide when his wife left him, but he won’t because it’s too good for him. The reason he wants to appear in the local paper, he says, is because it will make his year.

Tony begins to see that Anne is right – he’s not the only one in pain. As the series progresses and the people around him make gestures of support, he gradually warms to the idea that being kind to others is worth something after all.

The weighty topic of depression feels carefully handled, and has resonated with so many. This undoubtedly can be credited to the fact that so much of Gervais’ real personality traits (sense of humour, speech inflection, and opinions – animals are better than humans, atheism) are present in Tony – there is something about him that is familiar.

At once cynical and sentimental, cruel and heartwarming, sad yet uplifting, After Life shows us that hope is everything. When making small gestures to those around him, Tony feels his spirits lift (if only for a moment) when he swaps insults for acts of compassion.

As the final (perfect) song, Among The Living plays over the end scenes, After Life encourages us to see the value in making human connections with the people around us, and to dole out happiness as a gift to bestow on others, not to keep for ourselves.

At first incredulous that townsfolk would want to appear in a “shitty little free newspaper that kills a few minutes” because a patch of damp looked a bit like Kenneth Branagh, or that someone had received the same birthday card five times, by the end Tony sees that the few minutes that this paper kills is a good thing, as it makes people smile: “Everyone should be in the local paper, at least once…’I woz ‘ere’”.

So say good morning to your odd neighbour, muster up some kindness for your annoying co-worker; as Tony’s brother in law reminds him, people are fighting battles you cannot see. After Life encourages us to find joy in the banal. It’s all we’ve got.