Andy Burrows explains how he added his golden touch to the score for Ricky Gervais’ Netflix series, After Life.

Andy Burrows is enjoying some peanuts washed down with a well earned beer while recalling working on the scores for both seasons of Ricky Gervais’ hugely popular Netflix series, After Life. Admitting that he rarely has time to stop and talk about his career these days now that he’s swapped touring and all-nighters for the school run, Burrows is pausing to take a moment to reflect on his latest project, whilst taking in some rare UK sunshine:

“I'm just looking out of the window, and it’s beautiful weather at the moment, which I think is confusing the crap out of everyone,” he says, speaking to Headliner from his Hackney home during the lockdown period – which he’s dealing with in his own way. “If you open yourself a can of beer and a packet of peanuts, close your eyes, and start talking about something else, you'd be amazed where you can take yourself…”

The former Razorlight drummer and We are Scientists band member’s wild touring days are now far behind him, (“I feel like that was a different person!”). Burrows is now very comfortable spending most of his time at home with his wife and two daughters – although he does make time to play the piano and guitar when he can.

“I hardly ever stop and talk about my career, so whenever I do get the chance to talk about it, I feel so lucky because of everything I've done from Razorlight onward. I almost forget, because a lot of my days now are spent making sandwiches for the girls, cooking dinner for my family, or doing quite mundane things at home. I’m just a human in the world doing my thing, but I’ve met so many amazing people who I have become so close to. I do genuinely feel like a really lucky bugger!”

There’s no reason why he shouldn’t. Season two of Gervais’ devastating, yet wickedly funny series, After Life landed on Netflix following the staggering success of season one. The TV equivalent of a sad banger, After Life took its (as it turned out, very emotional) audience by surprise by being at once cynical and sentimental, cruel and heartwarming, sad yet uplifting – yet ultimately showing them that hope is everything. 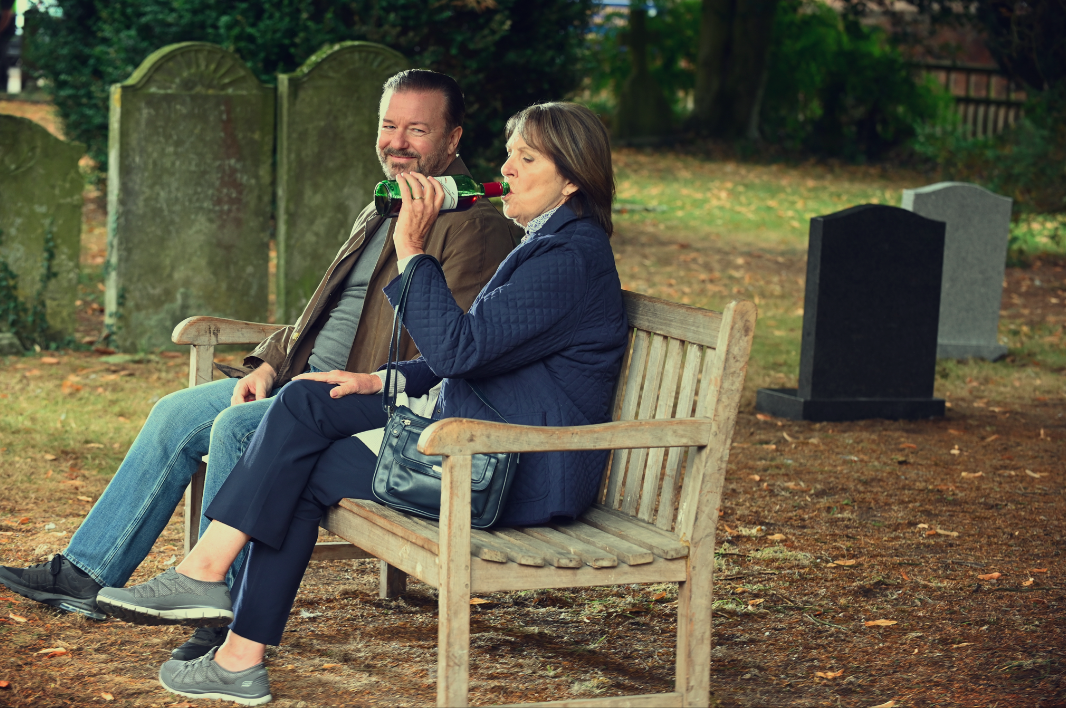 Even though it's quite sad, it’s such a lovely world to lose yourself in.

After season one aired, something extraordinary happened: people fresh off a binge-watch session flocked to Twitter to express how the series had made them feel less alone, reminded them of a loved one that had passed away, or acknowledged their feelings of depression and grief. The usually razor-tongued Gervais was touched with the unexpected outpouring, taking to social media himself to thank people for their heartfelt messages.

Having tapped into something that strongly resonated with so many, Gervais knew there were other stages of grief left to explore, and a second season was swiftly commissioned. Viewers knew that they were ready to get hurt again, and with series two offering up lines like, “It is everything. Being in love, I mean. You just don’t need anything else. You realise that even more when they’re not around,” – even the steeliest of viewers found that they mysteriously had something in their eye while watching Tony try to come to terms with the loss of his wife.

Burrows was delighted to work on the second installment following the success of the first. However, the release date coinciding with a worldwide pandemic could not have been predicted, and reached an audience teetering closer than they usually would be on an emotional edge:

“I think the sheer emotion of it all is pretty powerful for all of us,” he acknowledges. “It's something that we're all going through together, and I think everybody wants something to absorb to take their mind off this surreal situation, but at the same time allow themselves to actually feel and react. I think that music and art really allow you to let it out, but without dwelling only on real life.

"The thing about After Life is it’s very sad, and it will make you cry – a lot. But there is something exceptionally uplifting and positive about it. It's about human beings, it's about love, and it's about interaction, and I think that that's something that we could all really do with a heavy dose of at the moment.” 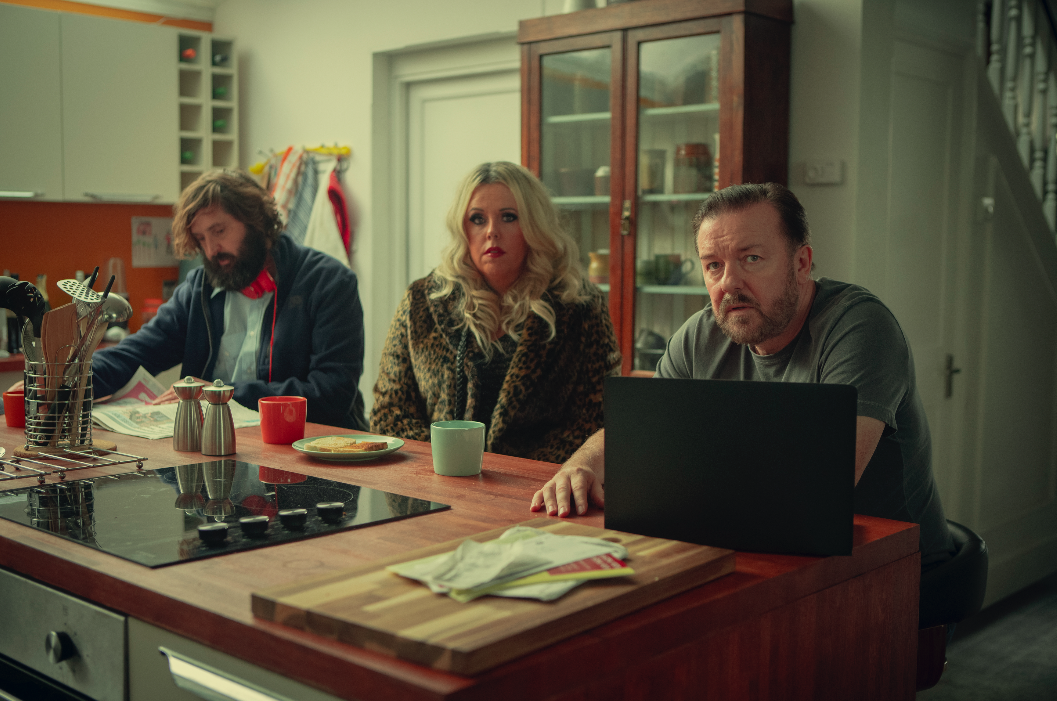 Ricky bases a lot of his projects around the music that he might use.

Before he was aware he was being asked to flex his musical muscles for another Gervais project, Burrows thought they were just chatting about their mutual love of music:

“He started talking to me about the kind of music he was listening to at the moment. It was a lot of Scandinavian bands, an American band, Hammock – quite soundscapey and very beautiful – but he was also sending me all these cool bands with quite a dirty guitar kind of vibe. I remember thinking, ‘why does he keep sending me all of this music?’ It wasn't until he started sending through bits of ideas for the script [for After Life] that I started to get the point of what was going on.”

Burrows was astonished to be invited to the first read-throughs of the script, but knowing how important music is to a Gervais project, he realised it made perfect sense:

“I don't think it's totally normal for a composer to be involved with a director and the actors so early on in a project, but I think it’s because he's so passionate about music,” he reasons. “Mine and his relationship is very much based on the fact that we think we're in the band together and we like talking about records that we like. He bases a lot of his projects around the music that he might use.”

Long before the project started shooting, Burrows and Gervais would spend hours talking about the music used in the series and the concept for the score, which led to the approach Burrows took:

“I think one of the nice things about After Life is that in some ways, you don’t notice the score. I feel like that's been a real task that I've had to get my head around because I hadn't ever done anything like that before – where it's supposed to almost just sit there, and it's part of the look, the sound and the feel. It comes together to make After Life what it is.”

Recording took place over the course of approximately two and a half months at London’s Air-Edel recording studio – a favourite of Gervais’ – where Burrows likes to start early after dropping his kids off at school.

“I like to try and keep business hours, as it were,” he clarifies. “I like to go in early, start, work as fast as I can, not fall out with anybody, crack on, and then just knock it on the head for the evening – and everyone stays sane. I’m used to being in bands where you’re working all hours and going all through the night. I like to keep it civilised and go to the pub after work and have a pint now. And I'm not comparing myself to the genius that is Ricky Gervais in any way, but I saw that his work ethic was very similar.

"It made me feel less weird, because I always used to think, ‘why do I not like doing work through the night? Maybe I'm the weird one! Why don't I like sitting up and working on a new take at 3am?’ I hated that vibe. So anyway, it was quite reassuring to see that Ricky likes to start dead early and get done as soon as he possibly can and go: bosh, bosh, bosh, bosh, creative, creative, creative, keep going, and then stop. For me that works: start early, do as much as you can, clock off, get your pub hours in and your dad hours in.” 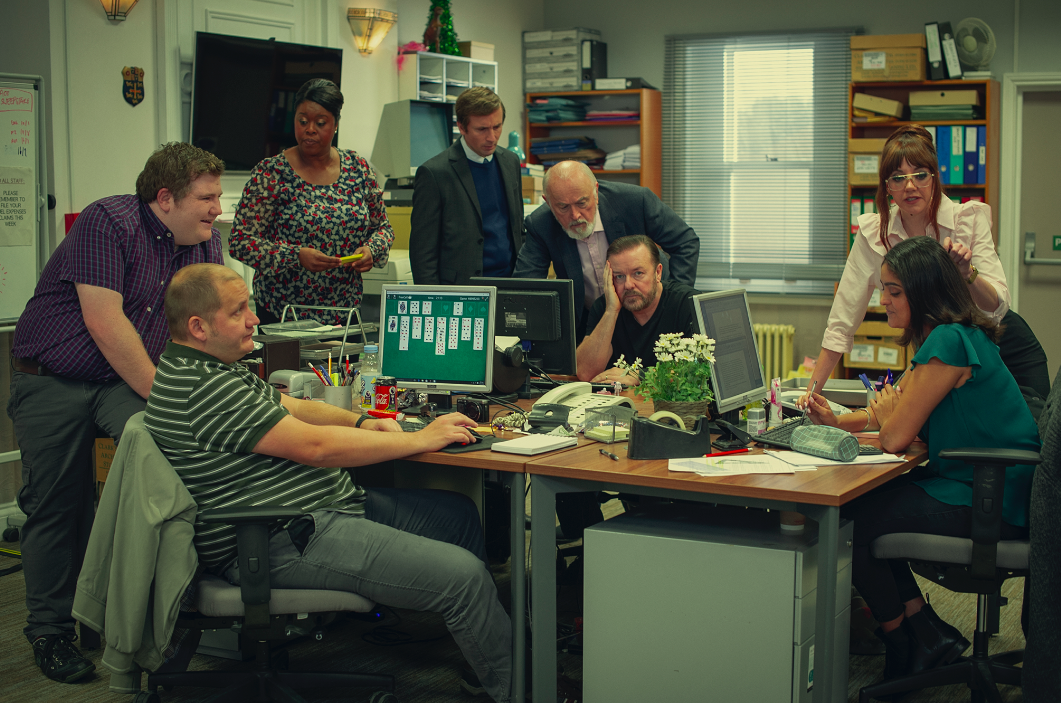 The new season sees Tony move into a different stage of grief, where he’s less numb and in denial, and is now negotiating with himself whilst trying to be more sensitive to other peoples’ pain:

“This new series has him take on a new – not a new persona – but it’s him trying to be more positive about the world, given that he's been so struck by the loss of his wife,” he elaborates.

“The first series is all about him having pretty much given up, and this series has a little bit more positivity to it in terms of his character, and that is reflected in some of these audio cues. One of the things Ricky said to me is that he feels like I'm interpreting what he wants very well. And I don't mean that in a self-congratulating way,” he adds.

“The thing that's working for me and him is that he says things that don't quite make sense, or he might sing a little something that doesn't quite sound right, and somehow I'm getting it. Whether it's making him feel warm and fuzzy, or it's making him cry...I think that's the thing at the moment – touch wood – that is going well for us. We're in sync with each other in terms of the mood.”

One haunting piano piece Burrows composed named For Lisa impressed Gervais, but they couldn’t find the right spot for it in this series.

“I'm gutted it hasn't made it! Ricky loves it, but sometimes things just don't quite fit, even if we love them. Maybe it will end up in the next one if there's a series three…” (There will be).

Working on After Life has been nothing but a joy to work on for Burrows, who is endlessly grateful to Gervais for giving him the opportunity to create the score for both seasons:

“Working on these bits of music, the production, the instrumentation and the little motifs is such an elating joy – even though there's a lot of melancholy. Even though it's quite sad, it’s such a lovely world to lose yourself in. It's staggeringly brilliant. I feel like he has surpassed himself in this. Like everybody, I didn't know what to expect. Then as soon as you're reintroduced to the characters and you're back in that world again, it takes you on this journey. By episodes three and four, you’re in tears, then you're laughing again, then you're in tears. I’d say it's even more teary!

"That’s why I think people are going to love it at this time. I really do. I think it's going to be one of the most welcome things to hit our screens. It's got this amazing ability to be uplifting while making us all bawl our eyes out. It's amazing how Ricky does that.”

Read our After Life review here.