Audrey Mika: On The Move

Audrey Mika has gone from YouTube sensation to a credible artist in a few shorts years. The talented rising star explains why she’s embracing her weirdness and why she dropped the mic.

Hailing from the San Francisco Bay Area, rising star Audrey Mika first rose to prominence as a YouTube sensation, amassing a staggering online following in a relatively short space of time with her unique covers of popular hits.

At only 19 years old, she has accumulated over 1 million YouTube subscribers and millions of monthly Spotify listeners. It all started when she uploaded a few videos to YouTube – aided by a pink toy microphone.

“I still can't believe every time I log onto my YouTube and I see that,” she admits. “I can't believe that many people care about this! When I uploaded my first YouTube cover video, I just did it for fun and I always did it because I loved it and I wanted it to be out there for everyone to see. I'm so grateful for everything.”

Not that she hasn’t worked hard to get to where she is now. Speaking to Headliner from her home in Long Beach, California, Mika and her best friend/manager are moving to West Hollywood tomorrow.

“I think it was either a Billie Eilish cover or an Ariana Grande cover that really went off. I was like, ‘oh God, what's happening?’ I'd never got any views and before that I had literally only gotten...not even 100 views” she realises.

“I only had 200 subscribers. They were very low numbers but I still loved it. When I saw those videos taking off it was really exciting. I was excited to find a platform that was growing. I have so many amazing supporters and I truly wouldn't be here without them. I love how they have been watching for so long and they love the mic, even though it's not really part of the aesthetic anymore,” she notes.

How did the infamous mic become a part of her online persona?

“I started using the pink mic because I like to hold something while I'm singing,” she admits. “I really couldn't tell you why people connected with it so much, but I would see the comments, and if I didn’t have it, everyone would be like, ‘Where's the mic?’ That's when I realised that people really love seeing that and it gave them that familiarity.” 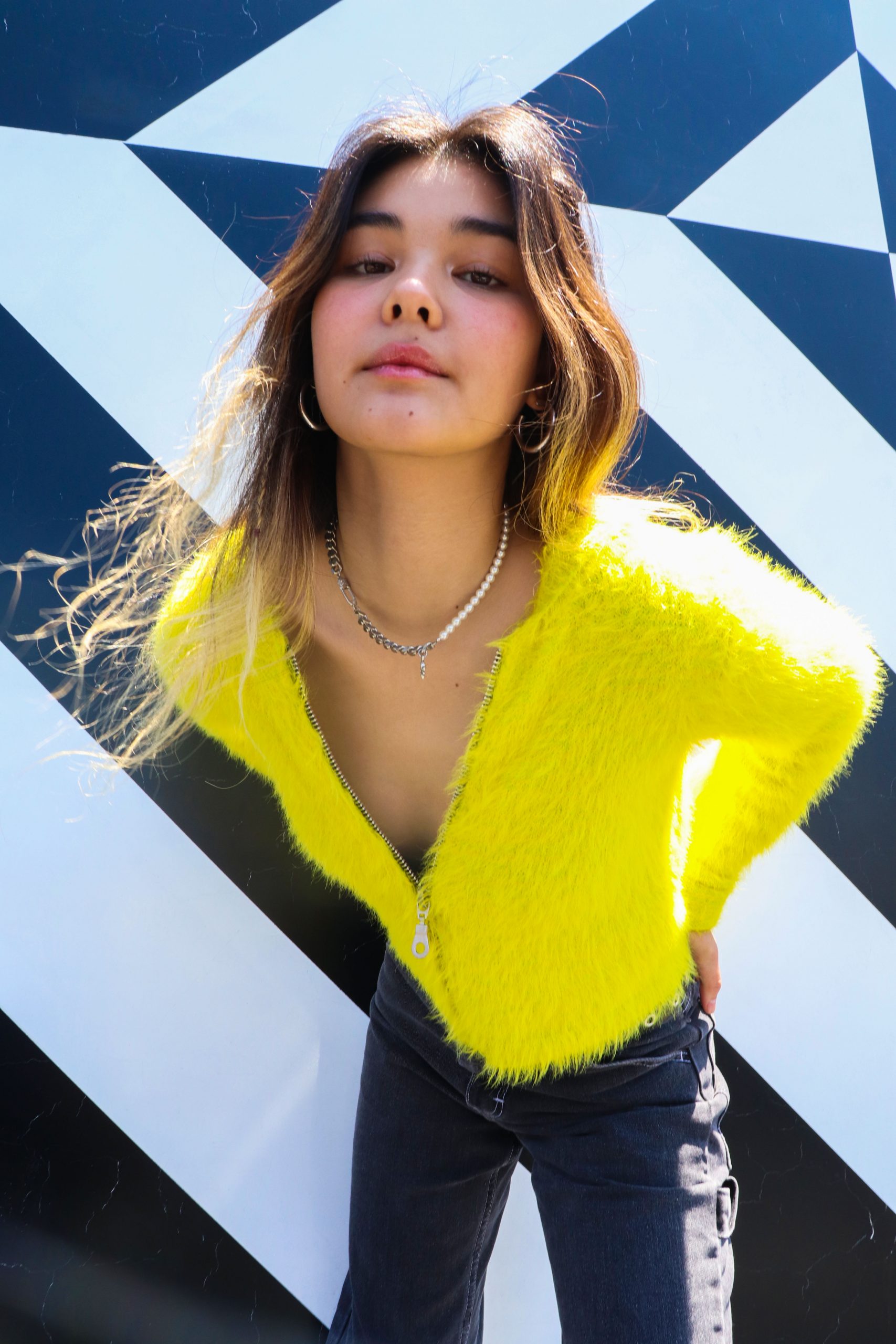 I'm a human and I think that people need to embrace their weird side.

A pop star for the Gen Z generation (and up), Mika’s voice and production style sounds like a pleasing combination of Camila Cabello and Ariana Grande – with a touch of Billie Eilish thrown in for good measure. Her chilled, layered vocals and R&B flavoured pop have proved a big hit with her ever growing army of fans.

Earlier this year, she dropped her EP, 5 A.M. – which includes dreamy Mariah-esque harmony-layered remix, Y U Gotta B Like That (ft. KYLE) – the original version racking up over 47M combined audio/video streams worldwide and over 806k videos on TikTok.

“The streams on the original song are absolutely crazy,” she says, humbly. “I never thought that I would get that much love for the song. That song truly changed my life. We were brainstorming ideas about who should be on the record and we came up with KYLE and we connected with his team. It was really cool how we were able to actually get him on the record – I love him and I still love him as an artist. He's a very cool guy.”

Raised as part of a music-loving family, Mika’s dad was a jazz musician who played a lot of Ella Fitzgerald, Frank Sinatra and Michael Bublé in the house, influencing his young daughter. Although before she found her way into music, Mika only had eyes for dance. After following her passion for almost 15 years, she abruptly quit when she realised that it no longer made her happy:

“I didn’t love dance the way I used to love it,” she says sadly. “It is very grueling and it's a pretty toxic environment. If you don't love it enough, it can kill you because it's so, so brutal and literal blood, sweat and tears. It's a lot, physically. I just didn't love it enough anymore. I realised that I really needed to leave because I was crying while I was dancing.”

During this time, Mika would come home after a long day of dance practice and find solace writing or singing music.

“That's when I knew that music was the thing I needed to do, because that was my way of expressing my emotion. Dance just wasn't doing that for me anymore, so I made a very, very difficult decision to leave. I am forever grateful that I made that tough decision. In the end it was the best decision of my life.” 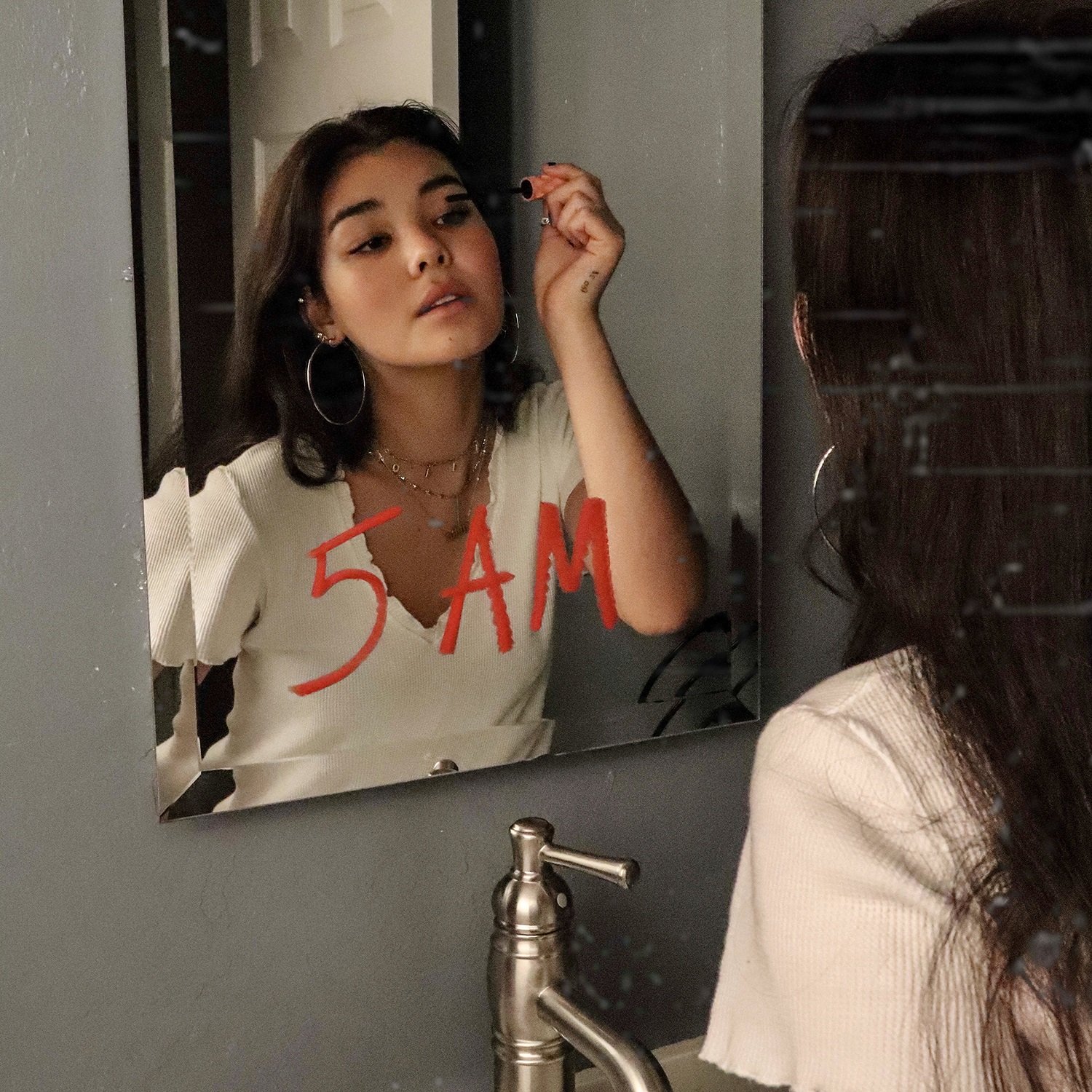 Determined to make it work, Mika moved to L.A to pursue music, which she says she found surprisingly easy:

“Honestly for some reason, the move wasn't that hard. I don't know why! I had lived in my house my entire life and I just packed everything up. I love my family so much and I miss them every day, so I get a little homesick sometimes. But I think what made me feel okay with it is I got to move down here with my best friend. We've been doing everything together and she's also my manager. Now I'm so excited to start this new chapter with a new home.”

Mika is refreshingly relatable on social media and is not afraid to poke fun at herself. The photoshopped, orchestrated posts curated by artists her age reflect a brand, whereas Mika reflects what it’s like to be a teenage girl. No topic is off the table: dandruff, cold sores, unmade beds, gaining weight on lockdown and bad vocals.

“Wow, vocals [are] so weak in the second clip lmao,” she says in one caption, while pointing out a “huge ass vein” she hates on the left side of her face in another post.

“I'm strictly myself and I'm not really afraid to just put myself out there,” she says. “And whether that's me saying that I'm on the toilet or I'm just doing something really random – that’s me. I'm a human and I think that people need to embrace their weird side. That's my whole message: be weird and put yourself out there. If you want to, use a platform like YouTube or TikTok to make creative videos and get your weirdness out there. It's important to be weird. It's a scary world, so you need weird people.”

“I think I think we're all a little hard on ourselves during quarantine,” she adds. “We are in a world pandemic so it's okay to gain a little weight and eat whatever you want. Because there's nothing we can do right now. Props to those people that want to work out; good for them. But I'm willing to sit on the couch and eat whatever I want.”