Bruno Mars recently finished a three-month European stint of his world tour. At the time of writing, we're in Paris, the tour is a week from completion, and front of house engineer, Chris Rabold, tells me the team has barely been able to catch a breath.

“We’ve been all over Europe, and we still have another month to go, and then that’ll be the end... of this part,” Rabold smiles, adding that the US is next – and there will probably be a couple of one-off shows and TV performances in between.

I last saw Rabold in Pittsburgh at a Kenny Chesney concert, where I watched him keep entirely calm as the front of house cage almost took off during a wild rain storm. Today, we’re indoors, of course, so nothing to fear on that front. I spy a Clair PA system, and ask him to break it down for me (not literally, that would be madness).

“Yeah, we have the flagship Clair offering - the Cohesion system – which is fantastic,” he explains. “We have our main hangs, side hangs, and our 270s – the far rear hangs. It’s not a huge rig, and Bruno was having trouble with the sub bass on the stage as a lot of it is flexiglass, so we don’t even have ground subs - yet it’s still a very punchy show.”

His console for the Bruno tour is a DiGiCo SD7, which is the only desk that can accommodate the multitude of I/O required for a show like this:

“There’s like, a million in and out, so the SD7 has been kind of a default for me for several years now,” Rabold smiles. “But the console is so fast, and everything is right there; it’s easy to program offline, and the speed at which you can move things around - particularly in the rehearsal period when things are changing – is fantastic. What’s also good about the SD7 is when you’re in promo, which is often a super-intense scrutinised process, Bruno will want 10 things in five seconds, and that desk is just so fast with regards to that. I also use quite a lot of snapshots – again, because it’s just so quick - and that capability really matters.”

Rabold is running his SD7 at 96kHz:

“Systems are so much better these days, so you definitely hear the improvement running at 96kHz; there is so much working against us on a daily basis, so any little thing we can do to improve the source helps. When you get into the shittier places, it can be a little harder to discern, as you’re essentially working in concrete barns, but why not use the 96kHz to add that extra level if you can?”

Rabold has his SD7 pretty much maxed out – which he never deemed possible – which gives you an idea just how big this show is. He is also running Waves SoundGrid, using a handful of Waves EQ and FX plugins, and he has his trusted rack of outboard kit that he brings with him on every tour. His mic package is mainly Sennheiser for vocals, with some Shure, Telefunken, and Audio-Technica offerings, too.

“I do love the good old AT-4050 on the guitar; it’s just one of my favourite live guitar microphones to use, as it sounds so great,” Rabold declares. 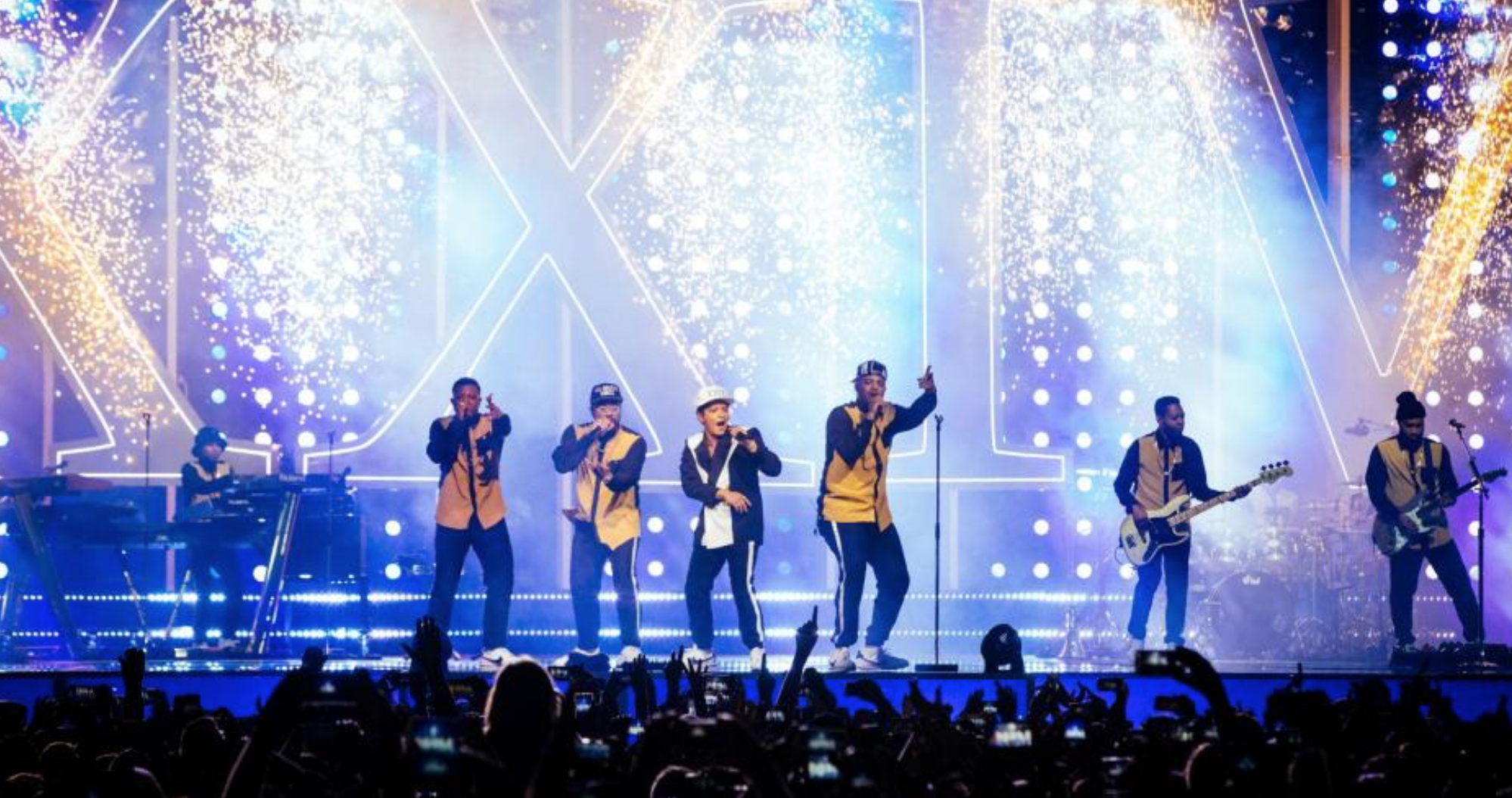 The [DiGiCo] SD7 is so fast, and everything is right there. Chris Rabold, FOH Engineer

Ramon Morales is working monitors on the show, and he's also on an SD7.

“Input wise, it’s a ton of stuff, as it’s a pretty big band up there,” Morales explains, as I make my way under the stage to his console. “And output wise, it’s pretty extensive, too; when I went to redo my session structure, I had one channel left for DSP – I never thought I would get to this point, but we’re here! We’re running at 96kHz, which takes up more DSP, but it makes such a huge difference, so I always want to work there.”

The stage is fairly quiet, Morales says – there are a set of flown side-fills which he has for emergency, but they haven’t been on at all so far:

“I’ve got 18 [Shure] TSM1000s which covers the entire band, and every tech has own mix, too; even the stage manager is on his own mix for calling out cues. Then there are the side-fills, a ton of FX sends, and some shout speakers. I have four layers on my console, and they’re all pretty full, so there is stuff going everywhere right now!”

Although every artist brings new challenges, Morales cites Bruno Mars as the biggest challenge of all – and in a good way:

“With Bruno, it’s definitely about focusing on getting the right mix, as opposed to ‘I can hear myself’. It’s a balancing act of finding where to put what in the mix to make it work for him and the instruments he plays.”

And this is where using JH Audio kit comes in, he continues:

“We have Bruno on JH16s - it’s his personal preference. We tried him on Roxanne and JH16v2s, but we kept going back to the JH16; there is something about that piece that he really likes, and it’s working. I have my JH16s, too – it’s important I’m on the same as him – and the JH16v2s are what the rest of the band are on, and they’re fantastic. What JH Audio did was add a couple of high end drivers to where the JH16s were, I think... And I’m sure there is something else going on in there, too, that we obviously don’t know about!

“Honestly, I am not sure what it is that does it with these ears, but it works so well; it all just gels, and the transition between him and the band between 16s and 16v2s is seamless – everyone is happy, and there is not much changing of settings between the shows at all. The JH Audio kit is always very good quality, and extremely reliable.” 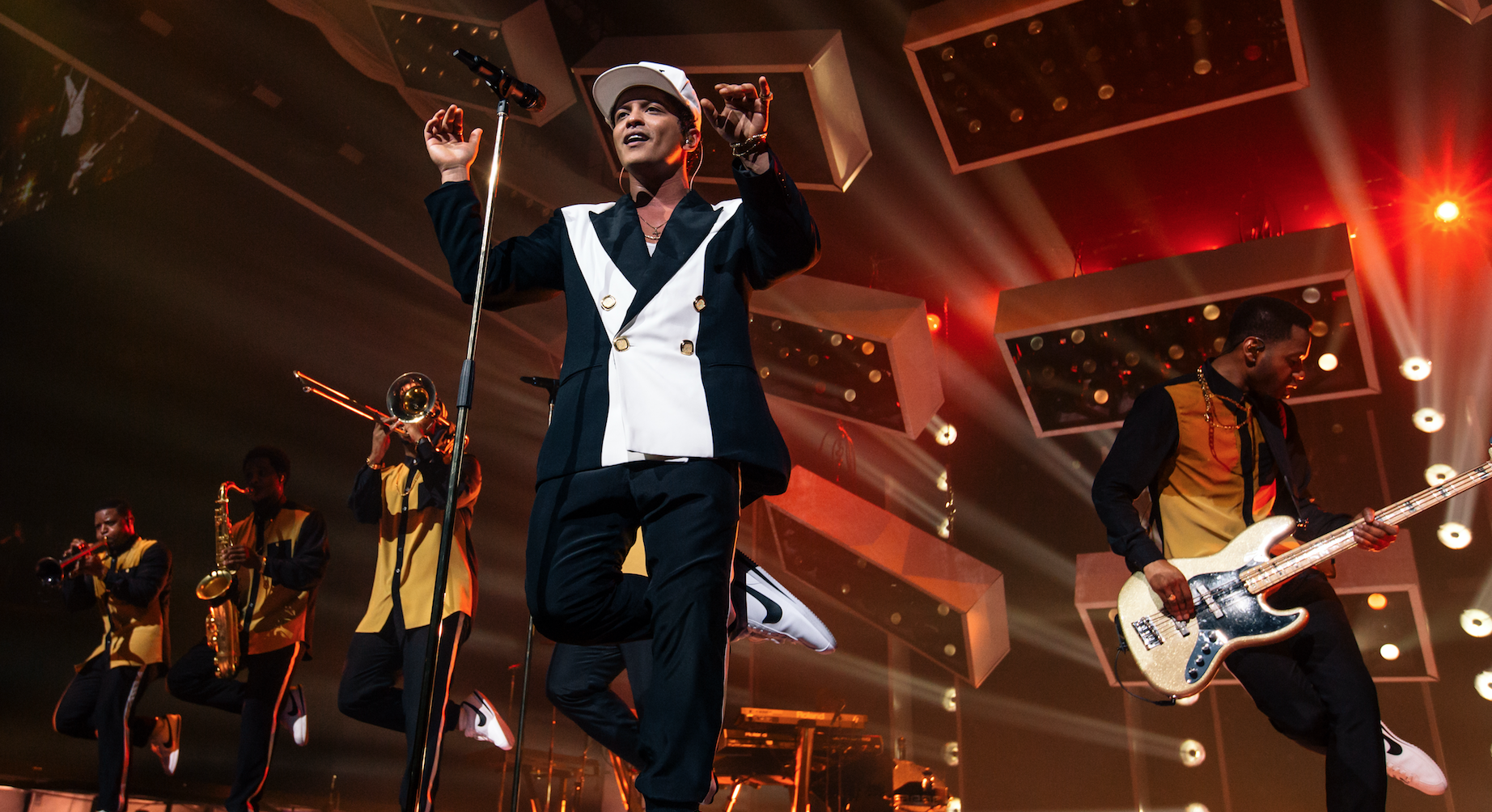 We have Bruno on [JH Audio] JH16s - it's his personal preference. Roman Morales, Monitor Engineer

I head backstage to meet Joel Forman, Bruno’s production manager of some six years. On arrival, he tells me these two Paris shows are 39 and 40 of the European stint, and there’s still two weeks to go. Christ, that’s a lot of performances!

“It is,” he smiles, and offers me a seat. “I don’t know if it’s by design, or just the growth of the artist. He is a very loyal guy, or maybe I am a glutton for punishment? [laughs] But really, I just surround myself with the best people, which always helps.”

According to Forman, Bruno Mars is very much in the moment all the time:

“I think every artist’s tour evolves, but to his credit, he wants to get out there and see how it feels, so he always tweaks things to make it sound and look better; he still has notes for video, lights, sound, which the departments receive on a daily basis, because he thinks we should push to be better every show. It’s hard not to mirror that when he does it himself, and he is so passionate. Most of us know that he is the only one that will notice many of these tiny changes, but it doesn’t matter to him; if it can be better, change it.”

The tour has been wildly successful so far, Forman says – but he looks at success in several ways, not all of which are measured:

“A successful tour as far as me, the production manager, comes down to this: we’re 11 weeks in, and most people still like each other; we have our moments, but we’re all good, and still willing to go for beer and supper with the guys next to us. That to me is a successful tour.

“Then there’s me as the tour accountant (Forman's other role on this tour), and that comes down to a balance sheet; but as far as what I expected it to be, Bruno is doing just fine. That’s measurable success, and the goal of all of us; no-one wants to be on a sinking ship, especially when the artist is busting his ass every night. We have to not break things, get the show up every day, and save money where we can. We had to go on sale with no design, not having any clue. We had no concept until week one of January, so to me it’s also a success in that we went from a napkin sketch to load in in about a month.” 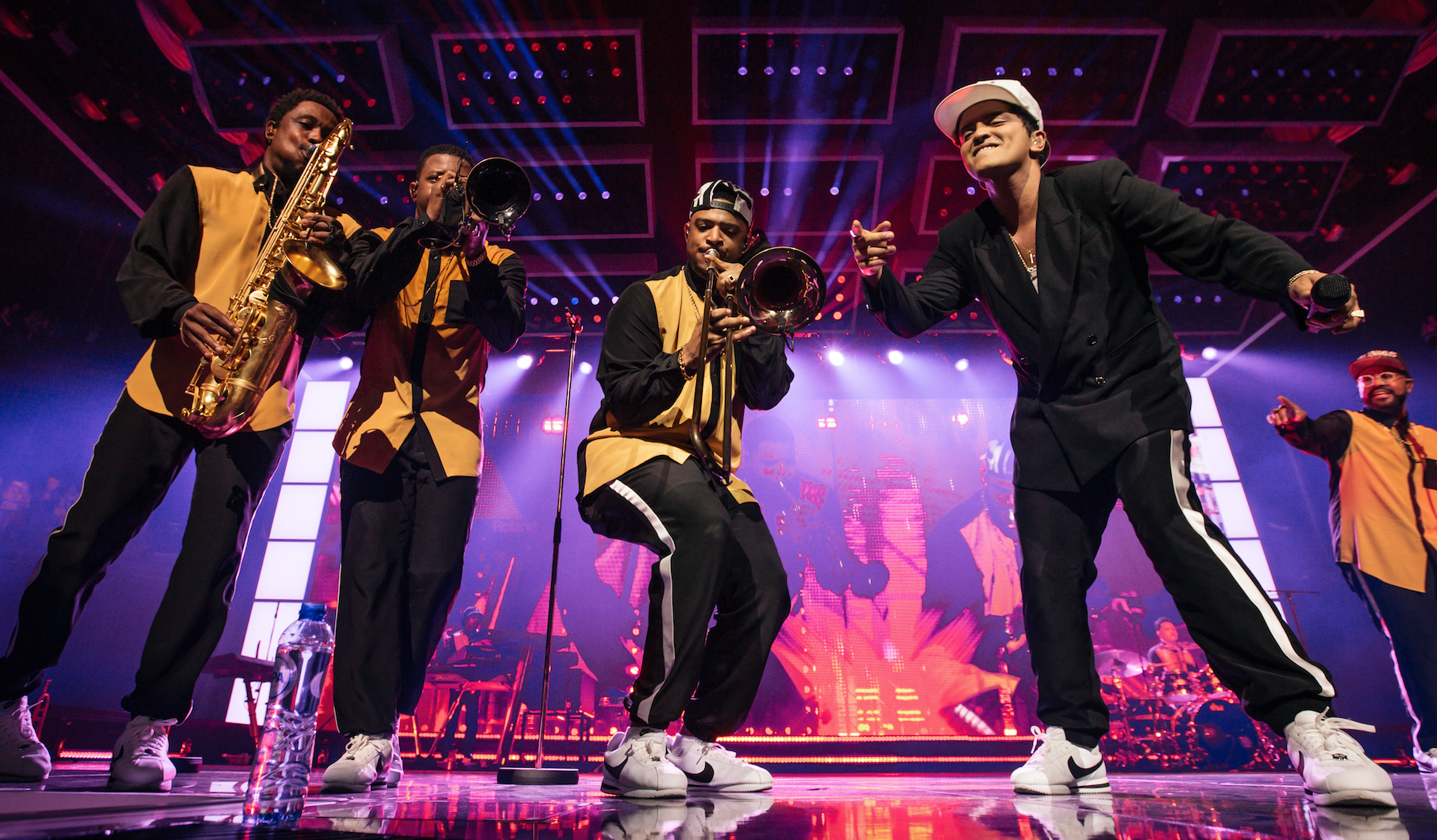 Lighting designer for this tour is Cory Fitzgerald, who has worked with Bruno Mars for seven years. Bruno was heavily involved throughout the process, he reveals:

“Bruno would sit down with me and we’d put together the band layout, and work out what entrances and exits he wanted to use. Then it was on to set lists, which kept changing – there were a few versions before he settled on one - but it was really all about putting the pieces together and walking through the show in terms of how each thing was going to look, and then we’d go from there.”

Fitzgerald is a big fan of GLP lighting fixtures, which he has utilised plenty of on this tour:

“Mark Ravenhill [GLP President] is a great guy, and I love his products; we use a bunch of GLP stuff. On this show, it’s the X4 Bar 20s, and we have a lot of them! [smiles] They line the whole stage; they rim the edge, and they ultimately provide the power behind him. Basically, the whole floor package is GLP X4 Bar 20s, and they work fantastically well.”

For Fitzgerald, it’s not only the brightness and the tilt functionality that impress him about the fixture – it’s much more surgical than that.

“The homogenised lens is a seriously big deal, so you don’t see the LED chips; and the zoom functionality gives you that little extra to play with,” he explains. “Also, the power and the punch, and the overall look of them is perfect. And then there’s the size. It’s just 100 percent the right fixture for the job. What’s also nice is the pixelation, which can give you a bunch of effects, too. It’s about having plenty of options, so it’s versatility as well as quality – and the GLPs most definitely tick both those boxes.”

I knew that Bruno Mars shows had a reputation for always being great, but nothing prepared me for what I was about to witness. Never before have I seen such a well organised, structured show – incredibly well put together. And it sounded incredible; Rabold’s mix was bang on the money, as were the band, all of whom could really move as well as play, which was particularly entertaining.

And the light show? Nothing short of epic. As Fitzgerald says, it’s all about getting the lighting to follow the music, and it truly provided another dimension. As I make my way to the exit, all I keep asking myself is, how does Bruno Mars manage to deliver a vocal performance like that, night in, night out? What a talent this guy is.