A voice that seamlessly moved between guttural angst to angelic chorister, and songs and lyrics that are eternally etched in memories, and inked on millions of fans worldwide. Chester Bennington, best known as the frontman of the greatly loved Linkin Park, was found dead at his residence in Los Angeles last week. He was truly a pivotal figure in the 21st Century rock scene.

Linkin Park’s debut album, Hybrid Theory, remains the greatest selling debut album of the 21st century, having sold over 30 million copies worldwide. But beyond commercial success, it’s a record that became the voice of a generation, with millions of fans having singled it out as the album that really got them into music, this music journalist included. Linkin Park released their seventh album, One More Light, only two months ago, and Bennington stood in as singer for Stone Temple Pilots between 2013 and 2015.

Chester Charles Bennington was born on March 20th, 1976 in Phoenix, Arizona to parents who were constantly working — his mother a nurse, and his father a police detective who worked in child sex abuse cases. He became interested in music at an early age, listening to Depeche Mode and Stone Temple Pilots, who he aspired to join one day; an aspiration he would go on to manifest as a reality. He was a victim of sexual abuse himself by an older male, beginning at age seven, and his troubled childhood was compounded by the divorce of his parents by the time he was 11. Bennington sought to cope with all this by abusing marijuana, alcohol, opium, cocaine, methamphetamine, and LSD.

Bennington’s abuse continued for six years — he was afraid of being labelled a liar, or gay, were he to reveal it. This, and his home situation, led him to experience murderous thoughts, and a strong desire to run away. He began drawing, writing poetry and songs as a coping mechanism.

Bennington’s first musical venture was with band Sean Dowdell and Friends?, who would reform as Grey Daze, in 1993. The post-grunge Arizona outfit released three albums, until Bennington left in 1998, and subsequently struggled to find another band. He grew frustrated, and considered quitting music altogether. He had, however, made vital steps within the music industry; Jeff Blue, an A&R, offered Bennington an audition with the future members of Linkin Park. He quit his digital services job and moved his family to California to attend the audition, which meant he had to miss his own birthday party. 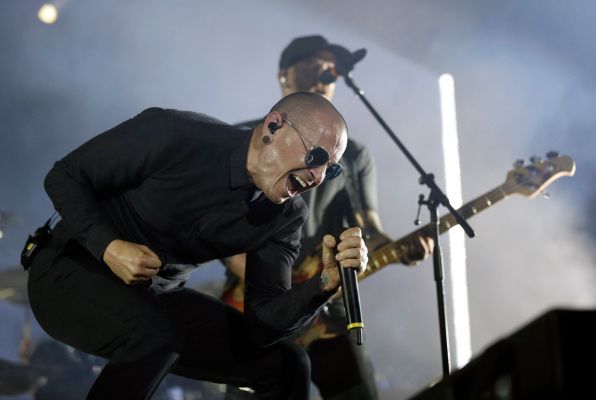 Bennington was welcomed into the band, at this point known as Xero, and together with co-vocalist Mike Shinoda wrote a lot of material. They struggled to find a record deal, however, until Jeff Blue intervened in the band’s fortunes again and helped secure an album deal with Warner Bros., with whom they released Hybrid Theory. The band decided to name themselves Lincoln Park, after the park they passed each day in Santa Monica en route to recording sessions. They manipulated the spelling and became Linkin Park in order to secure the domain linkinpark.com.

Hybrid Theory brought the band immediate success in 2000, which dawned on Shinoda and Bennington as they were driving and heard their music on the radio for the first time. The great chemistry between the two vocalists, the former’s hip-hop delivery and the latter’s formidable vocal range, made them a hugely exciting prospect, and helped to pioneer the nu-metal genre, which began to explode around this time. Songs like One Step Closer, Crawling, and In The End became instant anthems, and also the music of a disaffected youth. The album won the Grammy Award for Best Hard Rock Performance.

Besides the addition of rap vocals, Hybrid Theory blends metal music with electronics and DJ turntabling. They pushed this further with the remix album, Reanimation. Linkin Park’s second album proper, Meteora, sold 800,000 copies in its first week, and took Bennington and the band to the next level of international stardom, with singles Faint and Numb also becoming beloved songs of the alternative metal genre. Linkin Park then underwent another project that would prove huge for their genre: the metal/hip-hop crossover album, Collision Course, with rap superstar, Jay Z, released in 2004.

Both Meteora and Hybrid Theory won critical acclaim and fans worldwide largely because of Bennington publically exercising his demons with his stunning lyrics, and one of the greatest voices rock has ever seen — both the range and variability of his vocals gave it a depth unlike any other. Previously, metal had always been a genre where the lyrics were deliberately kept incomprehensible. But Bennington’s cleaner, and much more melodic delivery gave the music a great accessibility, one of the primary reasons so many people identify with the band so strongly.

While Linkin Park’s following releases didn’t catch fire in quite the same way, the band remained a household name, and have continued to headline festivals across the globe. Their recent release, One More Light, faced a backlash from fans and critics alike as the group switched to a mainstream pop sound. Bennington particularly responded angrily in interviews to accusations of Linkin Park selling out. Its lead single, Heavy, however, is a very strong song from the band, in which Bennington prophetically sings, 'if I just let go, I’d be set free.'

While Bennington did overcome his history of addiction, he tragically never quite conquered his depression, a topic he covered so viscerally in his music. He did a large amount of work for charity, including organisations Music for Relief, Habitat for Humanity, and People for the Ethical Treatment of Animals. Tributes have been pouring in from the music industry, with Rihanna calling Bennington, 'the greatest talent I have ever witnessed live.' Stormzy wrote that he is 'heartbroken', and Paramore singer, Hayley Williams, poignantly remarked that, 'artists are compelled to bring beauty into a world that can be so dark. And maybe at times made more vulnerable by it? Head hurts for Chester’s family/band/friends/fans.'

Bennington may have sang about 'the sacrifice of hiding in the light', but he will remain in the light, forever and always. There is no remote chance of these songs, that voice, and the extraordinary amount he achieved in his lifetime ever being forgotten. Not when millions will continue to hold him dearly in their hearts. Chester Bennington leaves behind a wife and six children.