John Lennon once said: “If you tried to give rock and roll another name, you might call it Chuck Berry.” He couldn’t have been more right. Berry influenced not only the beginning of rock and roll, but also the generations thereafter. He helped break sexual taboos and rebel against authority, and he did it all with swagger.

Born in 1926, Berry made his stage debut as a teen in junior high school. With the accompaniment of a friend on guitar, the reaction from the crowd encouraged him to learn some guitar chords from his partner, and he was hooked from then on. He spent his teen years developing his talent while saving money freelancing as a photographer, working with his father doing carpentry, and also moonlighting as a hairdresser in St. Louis. Inspiring stuff.

By the early '50s, he was playing guitar in bands, and in May 1955 travelled to Chicago where he met Leonard Chess of Chess Records to discuss releasing his blues material. Chess was most interested in his reworking of Bob Wills’ country tune, Ida Red, which Berry had renamed Maybellene. The song was recorded, and went on to sell over a million copies, hitting the top 10 that September.

Berry began playing at the Cosmo Club in St Louis earning $21 per week, competing with local rivals like Albert King and Ike Turner. Berry decided that if he was going to break into the mainstream, he had to know how to package himself well: by appealing to white teenagers. And he did. The next few years would see at least 10 more top 10 hits, including Roll Over Beethoven, Too Much Monkey Business, Brown Eyed Handsome Man, and Rock and Roll Music.

Around 1957, he opened Berry Park in Missouri. With a guitar-shaped swimming pool, golf course, hotel suites, and nightclub, it was his pride and joy.

“Now that’s what I call groovy,” he told Rolling Stone. “To own a piece of land is like getting the closest to God, I’d say.” Making a criminal record before a vinyl one, Berry used his several stretches inside pretty constructively, taking courses to complete his high school education and penning some of his most notable songs: No Particular Place To Go, Tulane, and Nadine. 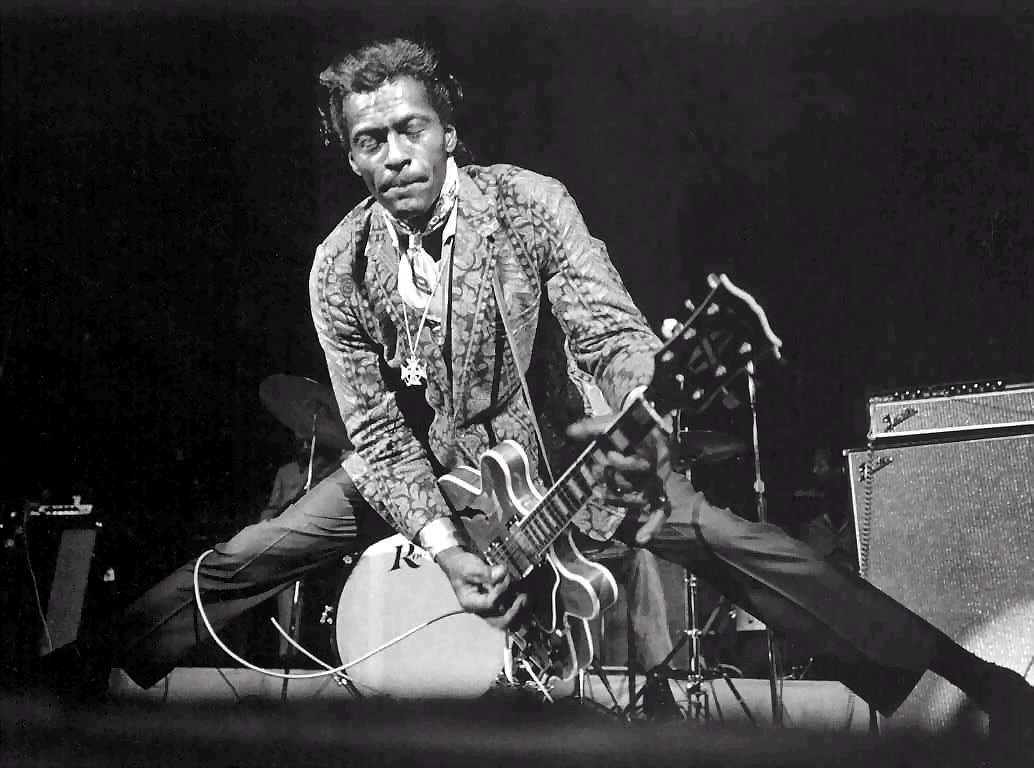 To own a piece of land is like getting the closest to God. Chuck Berry

In 1958, Berry recorded his all-time classic, Johnny B. Goode, at Chess Studios - it's gone on to become one of the most covered songs in rock history, and even ended up on the Voyager spacecraft! The song got to number two on the r&b charts, and eight on the Billboard Hot 100.

By 1972, he was back with Chess, and produced his biggest seller to date, the mildly pornographic My Ding-a-Ling. Selling over two million copies, it was his first gold record and a number one hit on both sides of the Atlantic.

Becoming as legendary as Berry himself was his phenomenal stage presence, more so was his infamous ‘duck walk’. The first time Berry performed this move was very much by accident while retrieving a rubber ball:

“Once it happened to bounce under the kitchen table, I was trying to retrieve it while it was still bouncing. Stooping with full-bended knees, but with my back and head vertical, I fit under the table top while scooting forward reaching for the ball. I happened to remember the manoeuvre while performing in New York for the first time and some journalist branded it the ‘duck walk.’”

Although his passing is a devastating blow for the world of music, there may be some hope on the horizon. Last year, there was a surprise announcement that Berry would be releasing his first (and last) album in nearly 40 years. Titled Chuck, the album primarily comprises of new, original songs written and recorded by Berry, featuring his long-time backing group. There was no set release date, however we are very much praying that it will still be released this year.
Chillingly, Berry announced:

“This record is dedicated to my beloved Toddy," referring to his wife of 68 years. “My darlin’ I’m growing old! I’ve worked on this record for a long time. Now I can hang up my shoes!”

We would like to thank Berry for all of the inspiring music he gave to us and send our deepest condolences to his family, friends and fans. RIP Chuck Berry.