When it came to creating the score for El Camino: A Breaking Bad Movie, Vince Gilligan was the one who knocked for composer Dave Porter, who has worked with the director and creator of Breaking Bad since its pilot episode.

“I always knew the show would be special – from the moment I saw the pilot,” begins composer Dave Porter on Breaking Bad.

“It just felt very filmic in a way that I hadn't seen before. It felt like a whole new level for television. I had a sense that it would be a special show but to be honest, in my heart, I thought at best it was going to be a critical darling show, and that it was going to be a show that only the critics and television aficionados loved. I never imagined it would have the broader audience that it did end up having!”

Talking to Headliner from his LA home after breaking his wrist in a bizarre gardening accident (we’ll come full circle on Michael McKean later), Porter has nothing but praise for his long-time collaborator, Vince Gilligan – the man behind the entire Breaking Bad universe, with whom Porter has worked with since the pilot episode of the show in 2008.

“There's definitely a thread that connects them all,” he says. “There's a sonic universe that I've created, along with Vince that began with Breaking Bad that has some overarching elements to it. I hope that it has some sort of through line in it that feels connected.”

Porter hopes that when anyone watches any of the three projects, they’ll feel like they’re in that Breaking Bad world – helped along by his use of a southwest US orchestral palette. One can’t help but wonder if Porter made a conscious decision to tie the score – which can be sparse in places – into the wide-angled cinematography synonymous with the show – often lingering on Albuquerque, New Mexico’s unforgiving desert landscapes.

“The show is well known for this,” he agrees, “and one of the great things about being a composer on a project like these is that I get to be last creatively in the process. There’s so many creative decisions that get made before I even start thinking about the music, from its script, to how it is shot, the performances of all the actors involved, and how it's edited.

"Whether consciously or subconsciously in terms of its impact on me, when I get to sit down and watch it, I would think about how music can best serve the show. These American southwest vistas play so well into all three stories, so it would be a waste of a creative opportunity not to try to sweeten those big moments more.” 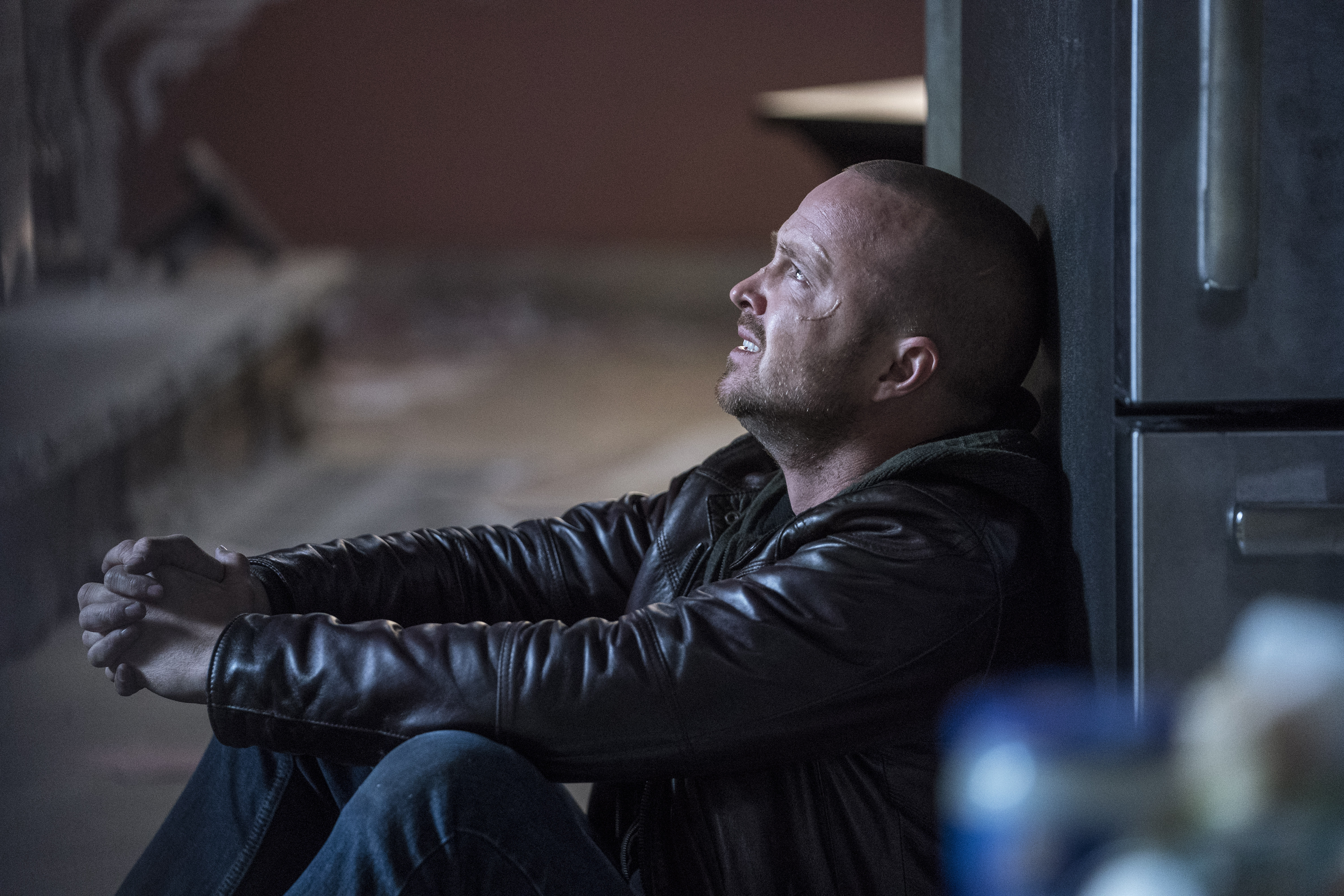 This version of the intro stuck because it gives a glimpse of the end of the story right at the start.

Early on, Porter devoured every script, but admits that now with Better Call Saul, he has stopped:

“And it's not because I don't love to read them! It's because I have found that if I wait and watch it, as opposed to reading it and having some preconception of what it might look like, I get this experience of watching it like a fan, which is great for me. But it also is very informative to me because it helps me instinctively, as I have a feeling for where the music should go or might be most effective.”

On that iconic Breaking Bad title sequence, Porter admits that this was one of the hardest things to score:

One theme that Porter did grasp early on was White’s transition into Heisenberg:

“The sort of milk toast, very boring guy turning into a terrible criminal,” he concurs. “This particular version of the intro stuck because it gives a glimpse of the end of the story right at the beginning. It's brash, it's bold, and it has a sense of where Walter White will be at the end of this series. When we first hear it at the beginning, he's far, far from that, but it's a little reminder at the beginning of every episode of where the larger story is going to be taken.”

We have to ask: did Porter know Heinsenberg’s fate from the start?

“No, and I can say with great certainty that Vince didn't know either,” he laughs. “In a television series, you never know how long you're gonna last, so you have to leave options open for yourself with different pathways to follow. I think certainly now, Vince Gilligan and the crew have earned the right to do whatever they want in terms of telling a story. When we began on Breaking Bad, these were very early days for all of us, and we were on a network that was not particularly well known in the United States at that time. It was hard to know what the reception would be like and how long the show would last!”

Fans of the series will remember a turning point for White’s character when it becomes apparent just how far he is willing to go to get what he wants, choosing not to intervene when Jesse Pinkman’s (played by Aaron Paul) girlfriend starts to choke when high on drugs, letting her die. Porter’s tense and eerily calm score accompanies this key scene, emphasising the coolness that viewers will come to associate with White’s increasingly calculated decisions from then on.

“To me, that is the moment of the whole series,” he asserts. “That is the pivotal moment. One of the great things about Breaking Bad is that it’s certainly open for debate. This scene is so cerebral; you can watch this scene without any music at all, and Bryan Cranston tells the entire story just in little facial expressions. It's truly an amazing performance without him saying a word.

"There was no reason for me to have to do much musically in the moment, because there's not a lot of action – he's not doing anything, in fact that is the action. The weight and the consequence of his choice not to do anything is the story here, and how huge of an impact that's going to have – not just on Jane, who doesn't survive – but on Walter and his curse, and of course his relationship with Jesse...”

For Porter, working on the prequel show (although it occasionally flashes forward to a world set after Breaking Bad) was one of the harder creative transitions he’s had to make in his career:

“We wanted to approach it as freshly as we possibly could,” he recalls. “Which all sounds great creatively when you say it, but when you sit down to do it and you're dealing with so many of the very same characters you had worked with for many years...to make a hard right turn and leave behind a lot of creative choices that you've made that – in fairness had been pretty successful – was hard to do."

Porter says that he went through a lot of false steps at the beginning:

“It was hard for me to imagine not linking the two shows right from the beginning. But in truth, it was really important not to, particularly as we had to set the character of Jimmy McGill as someone who's very, very different, with a different story to tell, a different background, different motivations, and as someone that had no connection at that time to the world of Breaking Bad.

Porter got to flex his composing skills considerably in the prequel, particularly in scenes where McGill’s increasingly frantic older brother, Chuck suffers a breakdown, and in a moment of paranoia, tears his house apart in search of a source of electricity – which he has convinced himself he is intolerant to.

“His character is played by the great Michael McKean, who has a tremendous influence on the reason Jimmy McGill becomes Saul Goodman later on. That scene is where it all falls apart for Chuck; he can no longer keep all the constructs of his life together, and the music certainly reflects a broader sonic palette that I use a lot.”

For Jimmy’s character, Porter leaned on a 70s rock palette – all heavy vibraphone, guitars, drums and bass, whereas for Chuck, things get elevated:

“In the relative world of Jimmy and Chuck, Chuck is the more sophisticated,” he points out. “He listens to a lot of jazz, he plays classical piano, and he's very smart. So there's elements of all of that, and it all comes to a head here. It's a mishmash of the influences of Jimmy and his own world falling apart all put into a very climactic moment.”

Picking up right where we left a fleeing Pinkman in the last scenes of Breaking Bad, El Camino gave fans a sense of closure by showing what happened to Heisenberg’s protege after fleeing his captors.

“It was a blessing to get to work on El Camino because it really did feel like a chance to focus on the character of Jesse in a way that we never could during the Breaking Bad series,” says Porter.

“He was always second fiddle a little bit, even though I would argue in some ways he was the moral centre of Breaking Bad.”

The score kicks in with a cacophony of sound that would have been at home in the finale of Breaking Bad, before quickly shifting to addressing Pinkman's story:

“There’s a lot of excitement in it in terms of his escape,” Porter says. “Where will he go? How will he do it? It's a story of trying to make up for his previous poor decisions and trying to salvage his life. So there's a much bigger picture that I tried to get into the story from pretty early on. The story is one of hope and renewal, but also regret and sadness.”

Porter says that this being a film as opposed to a TV series meant an increase in budget, but more importantly, gave him more time to work on the score.

“The other big difference is we were only following, for the most part, one character. On the TV shows, we're bouncing around between lots of different sides of the drama that are happening back and forth. Whereas El Camino really is just one story. It's not a linear story – we're cutting back and forth in time, all over the place. It is really focused in just on the character of Jesse, which led to some sequences of score that were longer because we weren't cutting away to some other action, and this allowed me a much longer period of time to be able to tell my story musically.”