Eva Gardner: In The P!nk

For 12 years, Eva Gardner has been bassist and backing vocalist for the global phenomenon that is P!nk, an artist renowned for her amazing live shows, vocal range, and formidable stage presence. So being part of this band is quite an undertaking: a fusion of aerial performers and dancers, as well as moving sets and stages, means you must have your wits about you the whole time; and being so high octane, looking after yourself on tour is also a must, which Eva does through a healthy diet of yoga, qigong, plenty of sleep, and a juicer. She is also an artist in her own right; remarkably, in between arena shows, she’s found time to put out an EP, Chasing Ghosts, which she’s written and recorded largely while on the road. We chat about her musical beginnings, favourite kit, and the challenges touring life can bring.

Despite touring with P!nk for 12 years, Eva is actually one of the newest members of her band, which speaks volumes.

“It really is an amazing family vibe, and a special thing to be in something like this,” Eva says, adding that she auditioned for the role. “I’d actually auditioned two years prior for the house band for Rockstar INXS, and that didn’t work out - but the MD remembered me, and when P!nk was looking for a bass player, he called me up. So I tried out, and after getting the phone call informing me that I got the gig, he said ‘we’ll send you a few albums of material to learn, so pack for three months, and we’ll see you in three days!’ [laughs]”

Wow. No pressure, then?

“[smiles] Yeah, a very quick changeover! My first show was in Ireland at Malahide Castle, so I was thrown into the fire right away,” Eva explains. “I had one rehearsal with the band, and didn’t meet P!nk until the soundcheck before the show. She gave me a big hug, and said ‘welcome to the family’, and the rest is history.”

Sounds like a great setup, for sure. And the calibre of musicians in P!nk’s ‘family’ is quite formidable.

“Yeah, I feel fortunate to be in the mix with this calibre of human and musician! And the crew is great, too. It’s a big crew, and they have all been here for a long time - many have worked for her longer than I have, so there is definitely a loyalty there, also.”

FAMILY FOOTSTEPS
Eva knew she wanted to be a bassist as a young girl. Her father, Kim Gardner, was part of the whole British Invasion scene in the ‘60s, and was in his first band with Stones’ guitarist Ronnie Wood. The two of them grew up in West Drayton, so knew each other from age 15.

“Dad was in The Birds with Ron, and he was close with The Who – particularly [Who bassist] John Entwhistle - so that was my childhood, growing up with all these guys, and hearing my dad’s stories,” Eva reflects. “So before I knew what it even meant, I would tell my school friends ‘I am gonna be a bass player!’ And here I am!”

It’s never easy following in your parents’ footsteps – particularly when they’re musical ones. Would Eva agree?

“Yeah, it was slow going at the beginning,” she admits. “Dad wasn’t that into the idea at the start, so it took him a while to come around; and it was only when his best friend [Led Zep/Stones producer, Andy Johns] came over one day with a bass and a little amp, and Dad thought Andy was going to show him some cool new gear, but he said ‘actually, this is for Eva – it’s about time we give her a bass lesson’ that he accepted it! [laughs]

“So that was it, no turning back - and since then, my family have been absolutely amazing. Dad was my first roadie! And looking back, it really was a very special time. I had to work for it too, though - I was told ‘no’ a few times, and I didn’t like the way that ‘no’ sounded! At that point, I realised I really, really wanted it.” 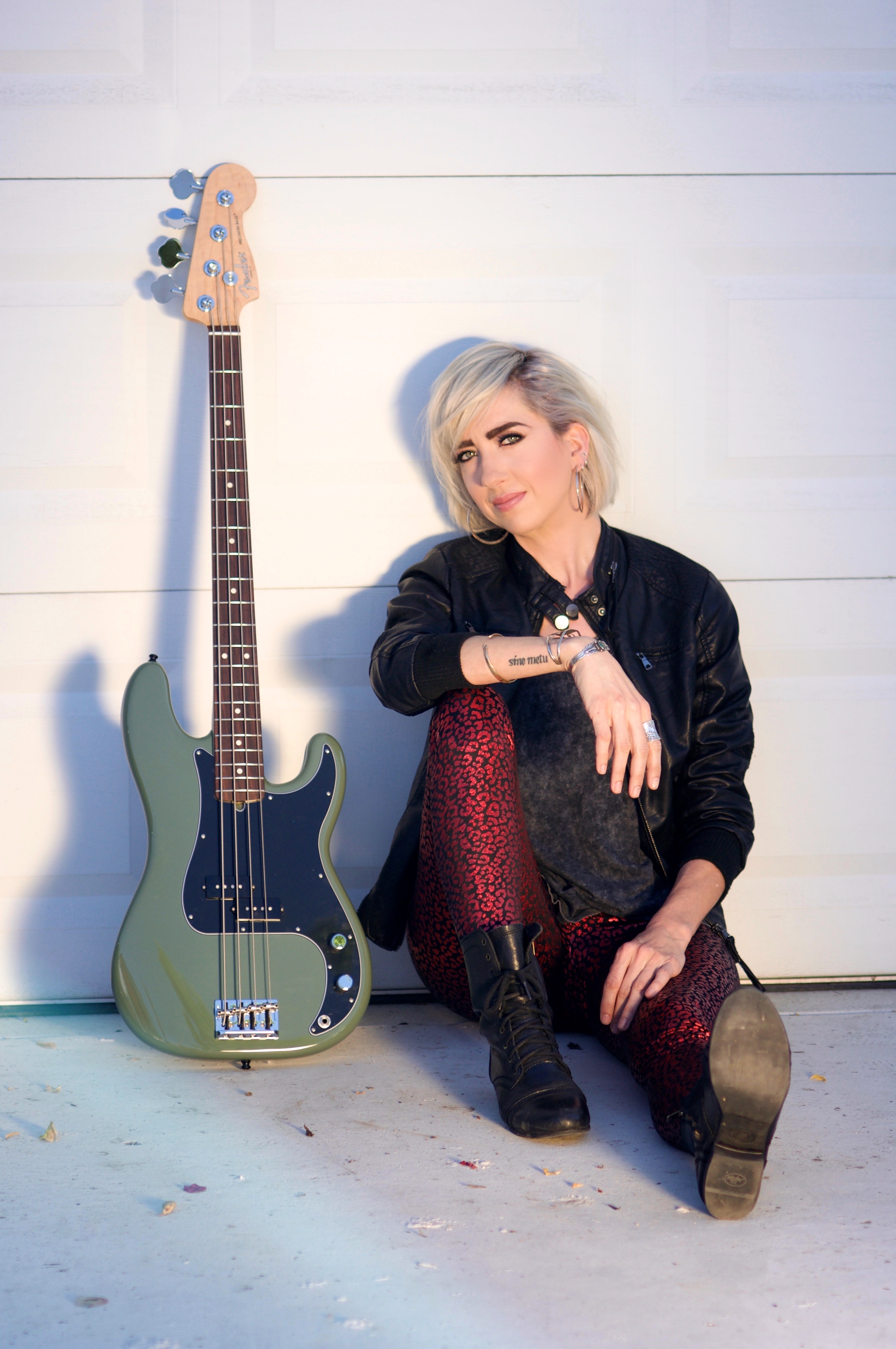 I was told ‘no’ a few times, and I didn’t like the way that ‘no’ sounded! At that point, I realised I really, really wanted it.

I ask Eva a little about her own music. She recently released her EP, Chasing Ghosts – a collection of well crafted, up-tempo, melodic rock songs with hooks-a-plenty.

“I am always doing all kinds of stuff,” she says. “I travel with a recording rig on the road: an Apogee One or Apogee Duet interface, an iRig mini 25-key controller, a guitar, and a bass. I do demos out here, and even did a bass session in the back of the tour bus in Germany once! So I eventually had a batch of songs, and when I had a little time off the road, I booked into a studio, did live drums, re-did the vocals, and now I have a five-song EP.”

Eva’s setup is what she describes as ‘old school’: an Ampeg rig, and a classic Fender bass.
“I always use Ampeg amps; the SVT-VRs for fly dates and most TV stuff, and then the SVT-2Pros, which are rackmount heads, for my touring rig,” she explains. “It’s pretty straightforward, that and my Fender P-Bass, with Rotosound strings. It’s the same kind of setup as my dad and all his peers used, so I kind of followed suit. I am a second generation player, as far as setup!”

Another key part of Eva’s live rig is her wireless kit. It’s hard enough for some vocalists to make the switch from wired to wireless, so for a bassist who is all about tone, I am guessing this took a little convincing.

“I mean, yeah - the ideal for the true sound is on a wire, but for a lot of what we do, and what I do for these massive production shows, there are so many moving parts: dancers, aerialists, sets and stages moving around, so I can’t be on a wire,” Eva says. “The band needs to move around, so we become part of the set because of that, so it became a necessity for me to go wireless.”

Eva was having some real issues with her previous wireless system, so had to seek out something more advanced, which needed to be reliable, as well as sonically pleasing.

“My system just wasn’t delivering the goods, so my tech called around to all his people in tech world, and he asked what they were using for guitar wireless, and it was largely Lectrosonics,” Eva explains. “So we sent out for some stuff, and we A/Bd the wire against the wireless. Now, when your sound isn’t there, it’s hard to get into the show, especially with the bass, because you need the tone and rumble - and when it’s not there, it’s thin and weak. I’d noticed the problem, but when we got the new Lectrosonics system set up, everyone then noticed the difference. They would look over at me and go ‘oh, ok, there you are – you’re back!’ So we had finally come upon a system that we were very, very happy with.”

Eva’s used her Lectrosonics rig for a year now, and has had zero issues with it: an LT transmitter with LR receiver. One of the cool things about the LT is its instrument input, which offers 1 M Ohm impedance, so it doesn’t load down the pickups; in other words, there is no need for a fancy cable to get great sonics.

“You can’t afford to have big issues when you’re doing stuff like this, and this system has been rock solid. Ultimately, you just want to get as close as you can to the wired sound, and this does it great – that, and for it to not drop out at any time, which it literally never has done.” 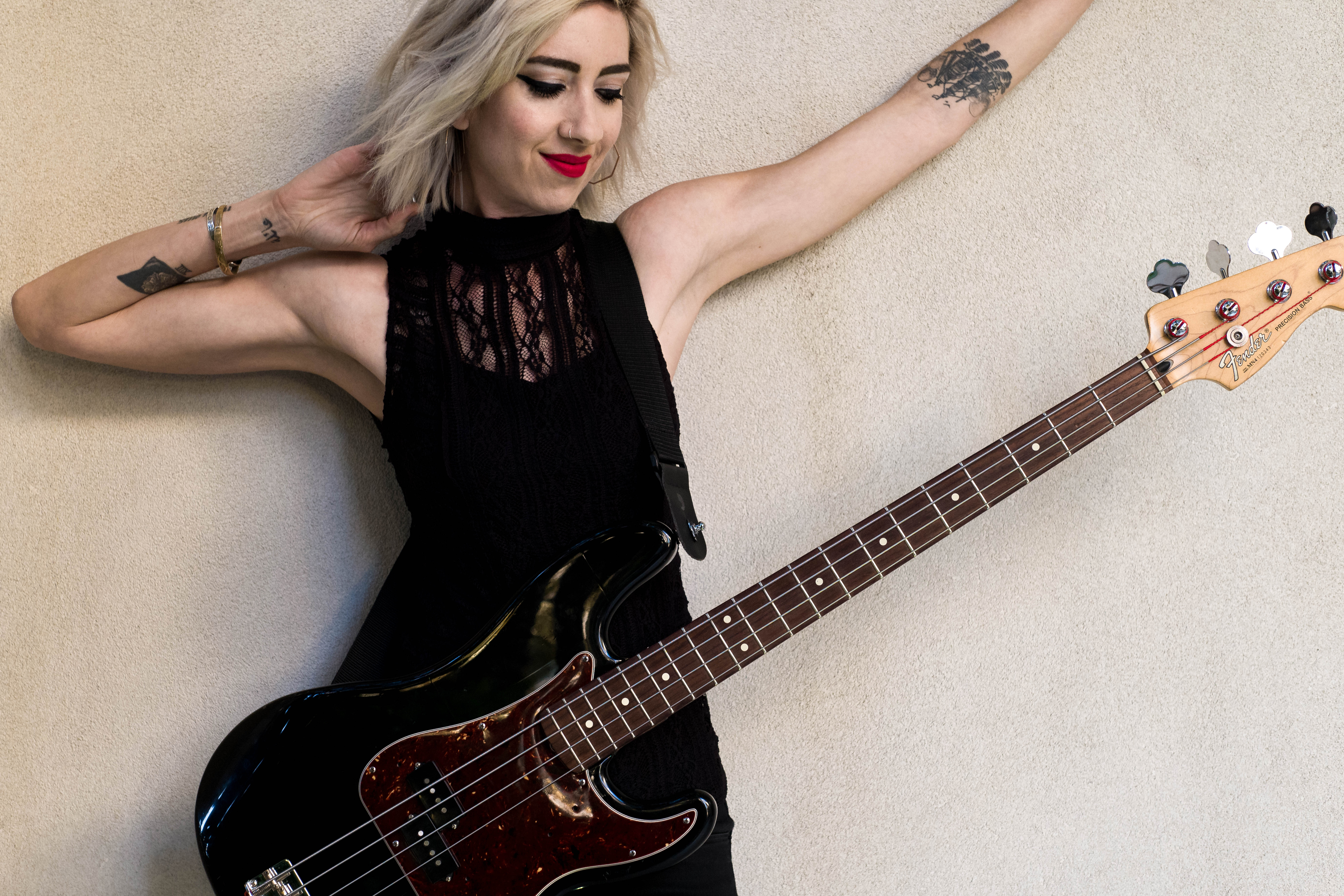 When we got the new Lectrosonics system, the whole band noticed the difference; we had finally come upon a wireless product that we were very, very happy with.

Eva is a true in-ears advocate – her choice of IEM is by JH Audio:

“We use the JH Roxanne right now, which gives me a really great low end - and it’s nice, as you can adjust that on your ears, as well. It can be really tough to get the bass experience in your ears, but these do a very good job; and we have the other elements on stage in some cases, such as the Butt Kickers, to add to that experience - and the bass amp, of course.

“But I went from the JH16s that I used before - which were also great – to Roxanne, and it’s been a solid switch. I think especially as a bass player, you notice that other musicians are looking for different things from their ears. For what I do, it really helps to have that very present low end in my ears, as well as surrounding you. I have both ears in, always, and I like my mix to sound like the song; I want to have everything in there. A little more kick and snare, maybe - and my voice, as I sing, as well - but for the most part, it’s a bit of everything, which gives me the sonic experience I need.”

Dare I ask how much she turns up the bass on the JH attenuator..?

“[laughs] I actually don’t need a whole lot of it, especially if I have the amp or subs, so fortunately, if they’re in play, I don’t have to have my in-ear mix too loud; the surrounding air is moving, and helping to vibrate my body, so it’s kinder on my ears!”

Before I let Eva get back to the team, I ask her how much attention is given in touring world today to staying healthy, and in good shape. It’s a less rock and roll lifestyle, surely, if you’re to maintain your edge on stage during a mega-tour like this?

“Oh, it’s very easy to burn out, and we have realised the things that keep us going: whatever you are putting in your body is your fuel; and we always carve out time for our yoga or qigong, which we’ve really got into, and that has been so great,” Eva reveals. “You’re away from home, and it’s easy to not feel very balanced, so these things do keep us grounded. Sleep is important, too – we get plenty of that, when possible - and we have a juicer to help us stay hydrated, and eat as healthily as we can, too. It’s our formula for taking care of ourselves. If we’re not feeling good, it’s no good to anybody. It’s about listening to your body, and doing what you need to do to perform, and support the artist... And besides, it sucks to
feel shitty! [smiles]”