Wham! singer, enormously successful solo artist, and cultural icon. George Michael was all of these things and more. The singer passed away on Christmas day of heart failure, but we are told he left us peacefully in his bed. His soulful voice will forever be heard during the Christmas period, thanks to the Wham! mega hit Last Christmas and his appearance on the Band Aid single Do They Know It’s Christmas? Other Wham! hits include Wake Me Up Before You Go-Go, and Michael scored several solo successes with tracks such as Faith and Careless Whisper.

Alongside the likes of Duran Duran and Culture Club, Michael was a huge part of the boom of British synth-pop in the '80s, and quickly became one of the biggest pop stars in the world. He particularly became an icon in the LGBT community after coming out in 1998, albeit after being arrested for a ‘lewd act’ in a Beverly Hills public toilet.

Despite all his superstar qualities, Michael struggled with his celebrity status, and had a number of unfortunate high profile incidents, often under the influence of drugs. But today he is remembered as the incredible songwriter he is. Tributes have flooded in from his contemporaries such as Elton John and Boy George, and current artists Sam Smith and MNEK have stated they would not be the musicians they are had George Michael not come before them. To date, he has sold more than 100 million albums worldwide.

He was born Georgios Kyriacos Panayiotou to a Greek Cypriot family in North Finchley, London. His family moved to Radlett in Hertfordshire, and while attending Bushey Meads school he became close friends with Andrew Ridgely, with whom he would go on to form Wham!. They initially formed a ska quintet known as the Executive, before reforming as a duo. Michael wrote a number of songs, and after recording their first demo, the pair were signed to independent label Innervision.

Their debut single Wham Rap! was released in June 1982, and was among the first British singles to include rapping. The song failed to chart, but their follow up Young Guns (Go For It) in October that year reached no.3, helped greatly by a Top Of the Pops appearance and accompanying dance routine. Wham Rap! (Enjoy What You Do) was then re released and entered the top10. Riding this wave, Wham! released Bad Boys and Club Tropicana. With Wham! becoming exponentially huge, they released their debut album Fantastic in 1983, establishing itself at the peak of the album charts. The duo and Culture Club were now both vying to be the biggest of Britain’s “new pop” acts.

Michael and Ridgeley switched to label CBS (which would be acquired by Sony) to release their second album, the aptly titled Make It Big in 1984.Their success became truly global with more hit singles in Wake Me Up Before You Go-Go, Careless Whisper, Freedom, and Everything She Wants. In 1985, Wham! became the first western pop group to visit the People’s Republic of China; film director Lindsey Anderson documented the trip in Western Skies: Wham! in China (1986).

Despite all of this, George Michael had his sights set on a solo future. Careless Whisper was being issued as a Michael solo single in many countries, despite officially being a Wham! song. When Michael and Ridgeley played their final show together at Wembley and released their final album Music From the Edge Of Heaven, the former had already topped the charts with his first solo single, A Different Corner (1986).

The following year, Michael went to the top of the charts again with the Aretha Franklin duet I Knew You Were Waiting (For Me). The Autumn of ’87 saw him release his debut album, Faith, which he wrote, arranged and produced himself. This album spawned further hits, among them I Want Your Sex (which proved to be very controversial at the time), Faith, Father Figure, and Kissing a Fool. In 1998 Michael embarked on a greatly successful world tour; however it was around this time he was becoming increasingly sceptical of the superstar status he had been accruing for a lengthy period of time.

No music materialised until 1990, when he released his second solo record Listen Without Prejudice Vol 1. While it was a commercial success, its sales were significantly less than that of Faith. Michael refused to appear in any of the music videos released to support the album – for the Freedom ’90 video, the singer had some of the world’s best known supermodels lip sync the lyrics, including Naomi Campbell and Cindy Crawford.

Michael released the Five Live EP in 1993, which included tracks from his performance with Queen at the Freddie Mercury tribute concert, held at Wembley stadium. He donated the EP’s proceeds to the Mercury Phoenix Trust, to help combat AIDS. He then released Jesus to a Child the following year, a song about his lover Anselmo Feleppa, who died from a brain haemorrhage brought about by AIDS. His homosexuality remained private at this stage. 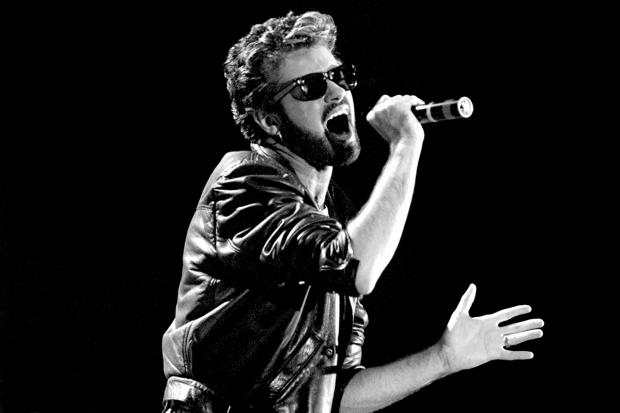 A larger than life character who was destined for stardom, yet resented its trappings.

Michael achieved yet another no.1 single with Fastlove in April 1996, with his third solo album, Older, following in its tracks. The album went platinum in the US. Michael won best male at the Brit Awards that year, and won his third Ivor Novello award as songwriter of the year. Michael released his first compilation album and then a covers album, around the time he was embroiled in scandal following his public lavatory incident. His single, Outside, was written about the event. He chose to come out of the closet in a televised interview on the American news channel CNN, also revealing he had been in a relationship with businessman Kenny Gross since 1996.

Undeterred, Michael revealed a new musical direction with the electro-pop of Freeek! In 2002, and then the politically charged Shoot the Dog, a song about Tony Blair and George W Bush shortly before the pair went to war with Iraq. His fifth album, Patience, was another chart topper, spawning popular singles Flawless (Go to the City) and Amazing. The end of the noughties saw Michael’s public life unravel; after being arrested for a number of drug offences, he had his driving license revoked for five years, and a prison sentence after crashing into a Snappy Snaps shop in Hampstead. He admitted to driving under the influence of cannabis. His Symphonica tour in 2011 was halted when he became ill with severe pneumonia, spending a week in intensive care.

In 2013, Michael was airlifted to hospital after falling out of a car travelling at high speed on the M1, just outside St. Albans. He released his final album, Symphonica, in March 2014 – his seventh solo album to top the UK album chart. Only this month was it revealed he was working on a new album with producer and songwriter, Naughty Boy. Also in the works was a film titled Freedom: George Michael, with the singer himself narrating the film. If the project is to continue, it will presumably take on a very different character.

While the tabloid press always gleefully documented his private life, the extent of his philanthropy is only now coming to light. Michael used to always reserve free tickets for NHS nurses at his concerts, even once putting a show on especially for them. There is a story of a woman who began crying in a cafe because she was struggling with her debts – she says that Michael overheard her, wrote her a cheque for £25k and swiftly left the establishment. A barmaid says the singer tipped her £5k upon learning she was a student nurse with a large amount of debt.

George Michael will now be recognised as one of the United Kingdom’s most gifted songwriters and performers. A larger than life character who was destined for stardom, yet resented its trappings. But most importantly, a wonderful person on all accounts, whether they be an Elton John or a student nurse working behind a bar. George Michael truly did give us his heart, and it falls on us to hold his music in our own hearts.